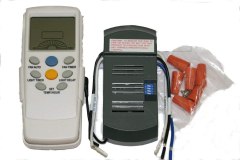 This versatile unit offers many features, including several modes for your ceiling fan and light.

Conveniently arranged buttons that are easy to reach with the thumb. We love how setting up the connectivity is quick and simple with the appropriate fan.

Limited use since compatibility is only with Hampton Bay and Harbor Breeze fans. 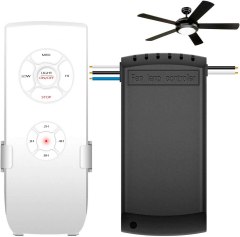 This remote control will work for most ceiling fans and installs easily, enabling wireless control of fan preferences.

Multi-functional remote has buttons for off\on, speed, light, and timing. Comes with a wall mount for convenient storing, and the ability to pair with other remotes.

It does not have a dimmer option.

A good option for replacing most remote-control fans for Harbor Breeze and other brand ceiling fans.

Stands out for its long, 40-foot working distance. Remote control can connect with taller ceiling fans or fans placed in different rooms of the home.

Universal features are difficult to set up with non-Harbor Breeze ceiling fans. 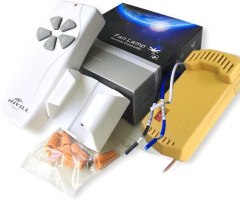 Remote control with 1 of the longest operating ranges at 100 feet. A good option for vaulted ceilings or use all around the home.

More advanced features are offered through the button layout. Great button organization makes it easy to use right off the bat.

Smaller timer controls can be difficult to press without looking at the fan directly. 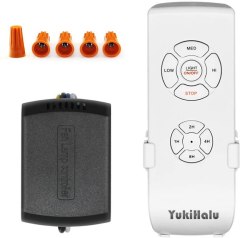 The receiver for this universal remote is especially small in size to better fit in the canopies of most fans for easy installation.

Universal remote will work with most brands. Has 4 different setting options on the remote for changing speed, light, power, and timing. Has a soft switch and zero cross detection.

When power goes out in the home, the ceiling fans automatically turn lights on once the electricity comes back on.

Ceiling fans circulate the air in your house, keeping it cooler in the summer and warmer in the winter. They save on your electric bills by giving your A/C and heater a break. Most ceiling fans have lights, so they’re a great two-for-one deal.

But a ceiling fan’s pull chains can be a hassle. They’re either too short or too long. They also sway too much, and you can’t tell them apart when it’s dark. As time goes by, pull chains begin to stick as the mechanical parts gradually wear out. The pull chain mechanism often fails before anything else, leaving you with a ceiling fan and lights that can only be controlled by a wall switch. 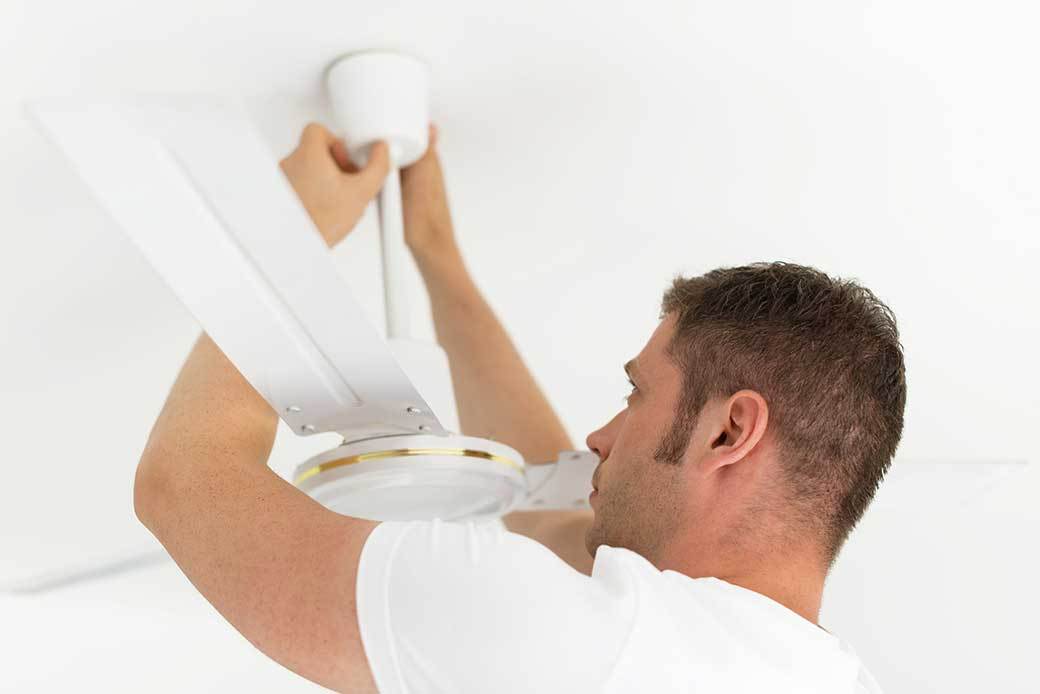 Ceiling fans that are “down-rod” styles may not have room for the receiver unit. If that’s the case, you may have to push the receiver up into the ceiling. This will limit the range of the ceiling fan remote control.

Ceiling fan remote control kits can be universal or specific to a particular brand of ceiling fan. Most ceiling fan remote controls will list the compatible brands in their description. This makes it easier to determine if the receiver will fit inside the fan housing, but it isn’t a guarantee. Your best bet is a kit that is specific to the brand of your ceiling fan. Universal kits are usually cheaper, but they don’t always fit.

The receiver is connected to the fan, so it runs off the electricity in the house. However, the remote control requires batteries like your other remotes. Most ceiling fan remote controls use AA or AAA batteries. Very few kits include batteries. Be sure to have some on hand.

Not only should ceiling fan remote controls include certain minimum functions, but they should also be laid out in a convenient fashion that is easy to use. Some of the remotes are overly complicated. If they’re too confusing to use, you’re better off sticking with pull chains. The best remote controls are those that separate the light controls from the fan controls. If the buttons are too close together, you’re more likely to mix them up, which can be frustrating.

Some ceiling fan remote controls include a dimmer switch. These remote controls only work with incandescent bulbs. If you have LED bulbs in your fan, the dimmer won’t work.

A small percentage of ceiling fan remote controls allow you to reverse the direction of the blades without having to reach up and use the selector switch on the fan. It’s a nice touch, but it’s not essential. It also requires additional wiring inside the fan housing to connect the receiver to the selector.

Some ceiling fan remote control kits include a wall mount for the remote. Mount it next to the wall switch where you’re used to turning the fan on and off, and you’ll be able to find the remote whenever you need it.

Under $20 is the low end of the price range for ceiling fan remote controls. These are the universal remotes that are supposed to work with every ceiling fan.

The most expensive ceiling fan remote controls start at $25 and go up. These remotes are brand-specific, have smaller receivers to better fit inside fans, and boast longer remote control ranges. 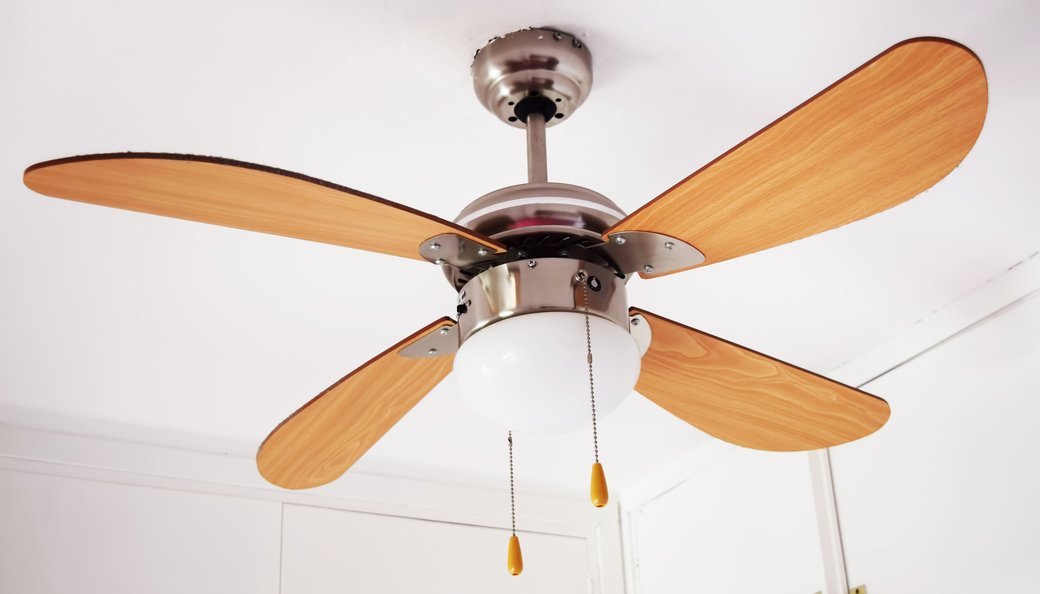 Before installing a ceiling fan remote control, use the pull chain to set the fan to its highest speed and use the other pull chain to turn the lights on. This is the required pull chain setting that the remote needs to work properly.

Q. Where is the receiver box supposed to go?
A.
Ideally, the receiver should fit inside the main ceiling fan housing. Otherwise, it can be installed in the ceiling.

Q. Is there any way to test the remote before I reattach the fan to the ceiling?
A.
Either you or a helper can hold the fan from underneath by the light globes, turn the power back on at the breaker box, and test the remote that way. This works, but it could be unsafe and we don’t recommend it.

Q. Everything is connected, but my remote control won’t work. What can I do?
A.
Open the battery compartment on the remote. Many of them have dip switches. Remove the canopy of the fan and check the dip switch settings on the receiver. The settings on both have to be the same for the ceiling fan remote control to work. 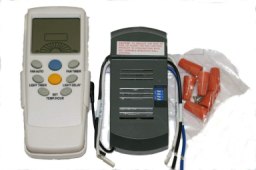 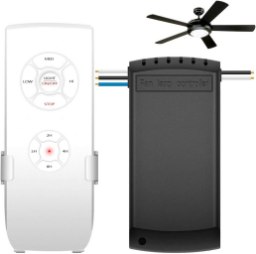 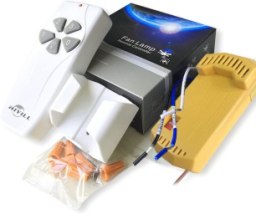 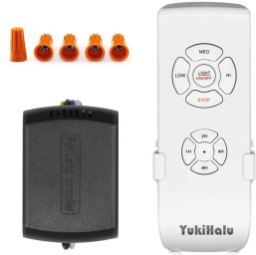 Top Pick
YukiHalu
3-in-1 Ceiling Fan Remote
Bottom Line
The receiver for this universal remote is especially small in size to better fit in the canopies of most fans for easy installation.
Shop Now 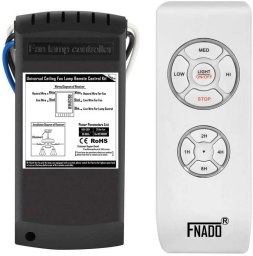 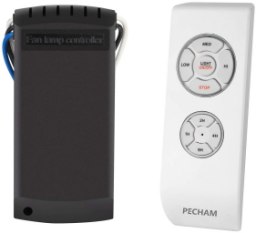