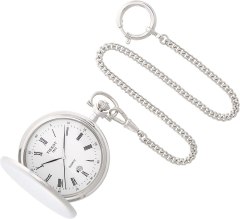 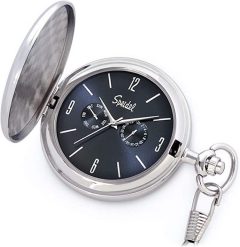 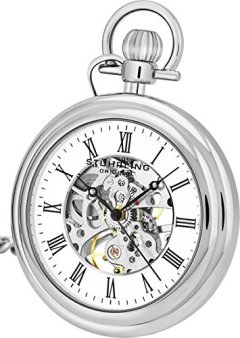 Established in 2002, New York-based Stührling offers a line of pocket watches that combine up-to-date tastes and trends with traditional design. 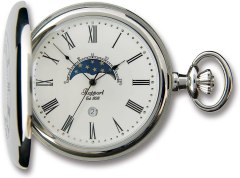 Rapport is a UK watch- and watch-winder maker and offers a quality selection of pocket watches including this polished half-hunter. 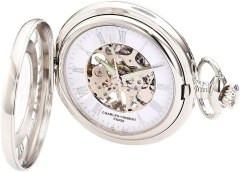 Good looks, accurate time, and practical design make this timepiece a top choice as a gift for someone special or a treat for yourself.

Handsome design with skeleton face and intricate etching give it contemporary and traditional appeal. Owners rave that it's even more attractive in person. Mechanical mechanism keeps accurate time. Comes with a chain.

Some reports of malfunction after several months, but the upside is the limited lifetime warranty. Can't be engraved.

In a world of wristwatches and smartphones, with all their timing, calendar, and other functions, why would you ever need a pocket watch? The answer is simple: you don’t. You don’t need a pocket watch, but given that pocket watches can be beautiful, elegant, and arresting, you certainly might want one.

Pocket watches are intricate pieces of machinery that come in a wide variety of designs for the front, back, cover, and chain. One of those designs was dictated by the safety needs of the railroads in the 1800s. There’s a lot of history behind pocket watches, from inventors in Germany to kings in England. When people see you with a pocket watch, it grabs their attention, and inevitably they’ll want to stop and ask you about it.

If you’ve never bought a pocket watch before, it can be a little confusing. We've gathered some key details for you to keep in your back pocket as you look for just the right pocket watch. 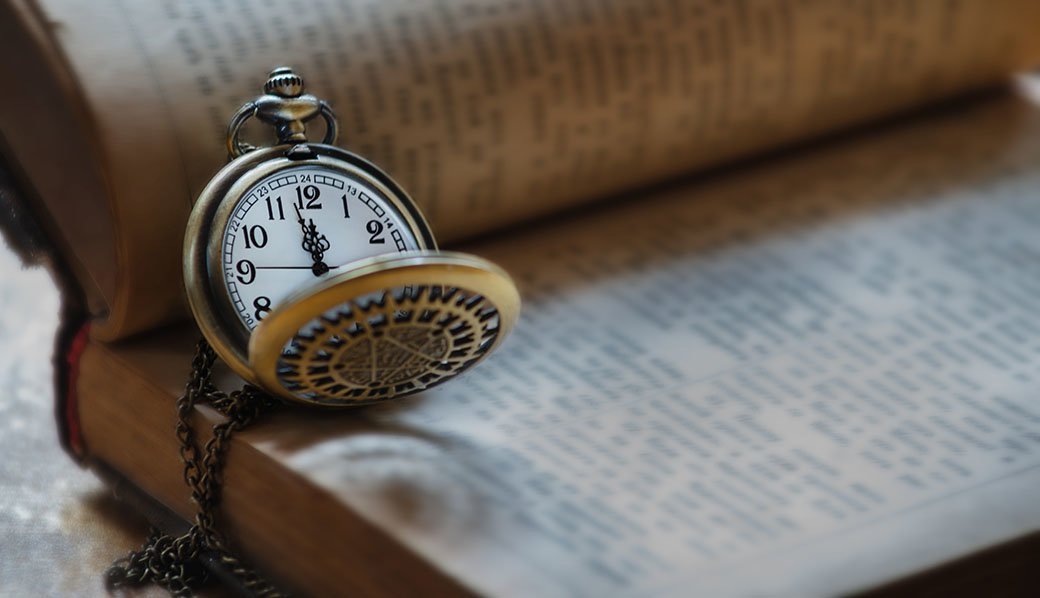 A watch that says “adjusted” means it has been calibrated in up to nine different positions to ensure optimal accuracy.

Why buy a pocket watch?

There are plenty of reasons why you might want to add a pocket watch to your timepiece collection.

Elegant: Pocket watches hearken back to an earlier, more refined time when life moved at a slower pace and elegance was king. The hurly-burly rush of the modern world was yet to come, and timepieces were worn as much for their appearance as for their functionality. If you’re attending a black-tie event, a tastefully understated pocket watch on a chain will let everyone know you’re doing more than simply putting in an appearance.

Stylish: Wearing a pocket watch establishes your style apart from the rest of the crowd. Anyone can cast a discreet glance at a wristwatch or pull a smartphone out of their pocket to check the time or the stock market. But when you pull out a pocket watch, pop it open to read the time, and close it to slip it back in your pocket, everyone is going to notice. A pocket watch says you’re a step above hoi polloi and willing to strike out on your own regardless of what the rest of the mob thinks or does.

Historical: Pocket watches have a centuries-long history. German inventor Peter Henlein invented the first watch in 1505. The early models were bulky, egg-shaped, and worn around the neck as a pendant, but the invention of screws in 1550 enabled them to be flattened into the disc-shaped watches we know today.

It’s almost impossible to wear or use a pocket watch without becoming immersed in their rich and varied history. It was Charles II of England, in 1675, who popularized the new way of carrying a watch in a pocket instead of on a pendant chain. When you wear a pocket watch, you’re continuing a noble tradition that started with royalty over 340 years ago.

Pocket watches come in several basic designs, each of which has a nearly infinite number of variations to it.

Railroad: The railroad or conductor’s watch was the result of a famous train wreck that took place in April 1891. It was caused because the conductor’s watch was slow. As a result of the resulting investigation and outcry, the railroads created mandatory standards for pocket watches to be used on the railroad. Those standards stipulated that all watches must be open-faced, be a size 16 (movement size of 1.7 inches) or size 18 (movement size of 1.766 inches), have a minimum of 17 jewels (used as bearings for the gears), and be adjusted to work in temperatures of 34°F to 100°F, among other qualities. Any watch that meets these standards is considered a railroad or conductor’s watch, regardless of any other variations.

Unisex: Pocket watches were originally considered accoutrements for women. It wasn’t until later that men began using them in large numbers. Today, some manufacturers create pocket watches that are neither distinctly male or female in design or appearance.

Traditional: A traditional gentleman’s watch from the 1800s was silver or gold, with stylized engraving on the back and front cover. The inner workings weren’t normally visible, and the face and hands could be any color or combination of colors, usually with Roman numerals.

Steampunk: Steampunk is a variation of the traditional style, but due to the popularity of all things steampunk, it has developed its own category. Many steampunk pocket watches are also skeleton watches, thus combining several designs into one.

Pocket watches are tiny, complex machines that use gears, wheels, levers, and springs to move the hands in precise increments. Repairing them can become a full-time hobby in and of itself, just like building model airplanes or railroads. In fact, many people who enjoy model railroads also enjoy working on pocket watches due to their overlapping histories. If you don’t want to do the repairs yourself, find a reputable watch repair shop in your area. If there aren’t any, you might consider buying a better (more expensive) pocket watch.

Did you know?
The aperture is a small window in the face cover that allows you to see part of the face without opening the watch.
STAFF
BestReviews

Watch: The case of a pocket watch is usually made of bronze, silver, stainless steel, or gold anodized metal. The inner mechanism has to be constructed from nonferrous (nonmagnetic) metals. The mechanism is so tiny that the electric fields from common household electronics can create magnetic fields that would freeze it in place.

Chain: The chain is typically made from the same material as the body of the watch. This is for appearance rather than function.

Movement: This means the watch gets its power from the mechanical movement of gears and levers driven by a spring. The spring has to be manually wound regularly, usually every 20 to 24 hours.

Quartz: In a quartz watch, a quartz crystal picks up a battery signal and vibrates at a set rate per second, sending regular electrical impulses to a tiny stepper motor that turns the gears that move the hands of the watch. Although it has gears in it, a quartz watch has far fewer moving parts than a movement or wind-up watch.

Hinged cover: When most people think of a pocket watch, they probably think of a 19th-century gentleman, pulling it out of his waistcoat pocket, flipping it open, and reading the time. Hinged covers over the face of the watch were designed to protect the glass from getting scratched.

Open face: Railroad watches were designed without a watch cover so the conductors and engineers could read them as soon as they looked at them. The train wreck of 1891 forced them to realize that even a few seconds could mean the difference between life and death. The railroads didn’t want their people fumbling around trying to get their watches open so they mandated that their employees had to use open-faced watches.

Did you know?
The gear train in most pocket watches has over 26 different parts in it.
STAFF
BestReviews

The low price range for pocket watches is around $6 to $21. These are small watches, some wind-up and some quartz. They may not be especially durable.

The medium price range for pocket watches is from $21 to $90. These are higher-quality watches, many of which have excellent manufacturer warranties.

The high price range for pocket watches extends from $90 to $675. This is where brand-name watches are found. Some of the most expensive watches are water resistant to depths of 100 feet.

"Guilloche is a process by which intricate patterns are engraved in the body or cover of the watch. "
STAFF
BestReviews 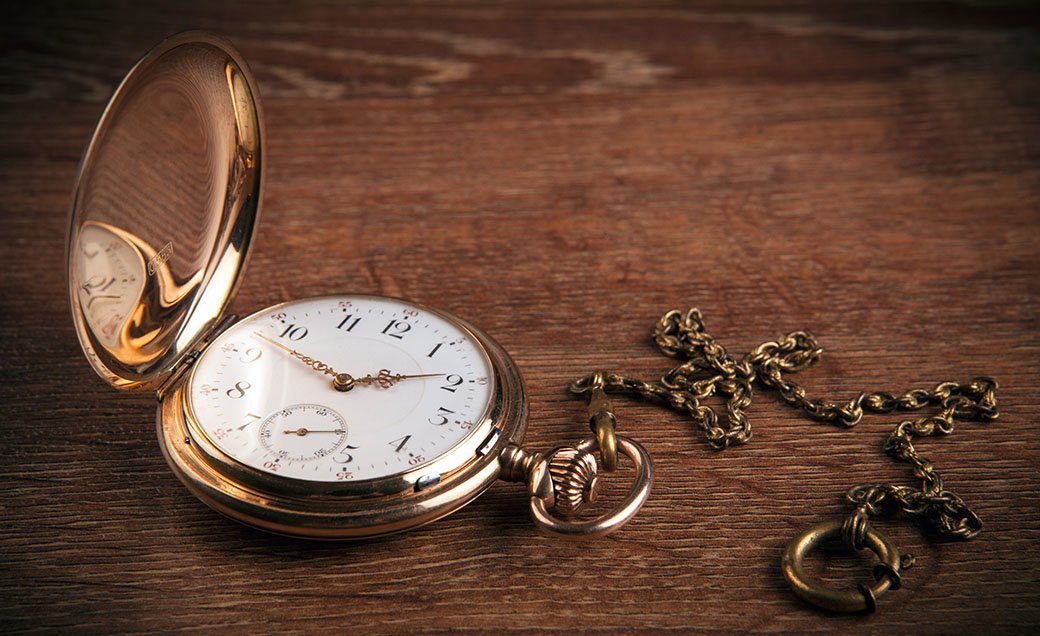 A hand-winding watch is another name for a manual or mechanical watch. All three terms mean the same thing.

Q. What is a “positional error” in a pocket watch?

A. Pocket watches have to be physically balanced so they will run properly when the watch is held or positioned at different angles. When the watch is out of balance, it creates positional errors that result in timing discrepancies. In other words, the watch won’t keep time properly.

Q. What is the mainspring in a pocket watch?

A. It’s a long, flat piece of coiled material, usually metal. As it tries to uncoil, it constantly exerts pressure on the barrel.

Q. I’ve heard of an “escapement” in pocket watches, but what is it?

A. The escapement provides impulses that maintain the oscillations of the balance wheel. This helps control the rate at which the hands revolve. 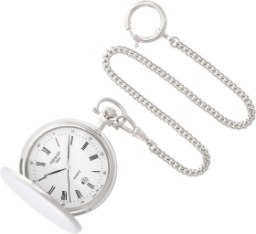 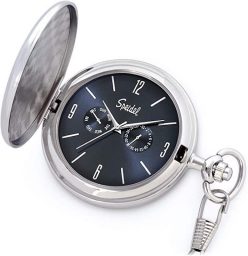 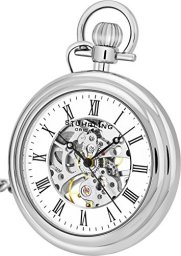 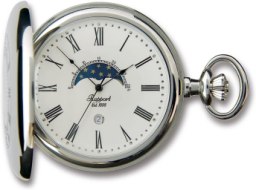 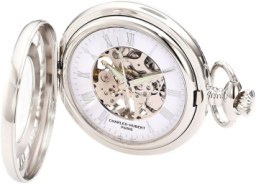 Top Pick
Charles-Hubert, Paris
3928 Classic Collection Pocket Watch
Bottom Line
Good looks, accurate time, and practical design make this timepiece a top choice as a gift for someone special or a treat for yourself.
Shop Now 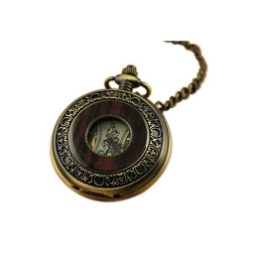 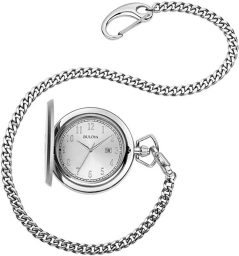 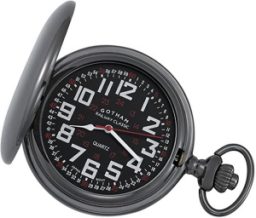 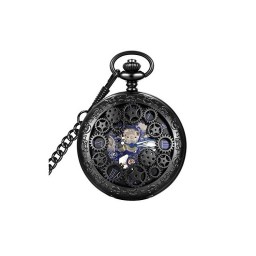 Top Pick
LYMFHCH
Steampunk Mechanical Skeleton Pocket Watch
Bottom Line
A beautiful timepiece at a price that's surprising considering all it has to offer – our choice for the best pocket watch for the budget-conscious shopper.
Shop Now