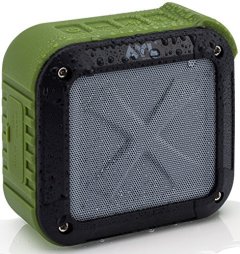 This rugged little unit can go with you all day, from your morning routine to the great outdoors and everywhere in between.

Water-resistant and available in 3 colors. Bluetooth capability with 33-foot range. 12-hour battery life. Compact and easy to take with you. Strap included for hanging it. Clear, crisp audio. Large controls.

A few complaints of the Bluetooth connection randomly dropping. 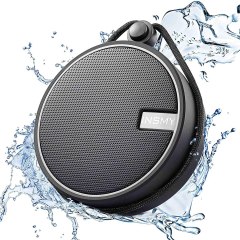 This portable speaker is equipped with suction cups that enable you to attach it to the wall of your shower.

Can be fully immersed in up to 1 meter of water for 30 minutes. Includes a built-in microphone for answering calls hands-free. Auto-pairs in 3 seconds. Offers up to 12 hours of playtime on a full charge. Available in 6 colors.

Although the sound produced is loud, it is often accompanied by distortions, making it hard to make words out. 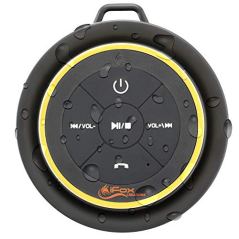 This durable model is easy to use and can withstand any amount of water without breaking or losing sound quality.

Some users wish the volume would go slightly higher. 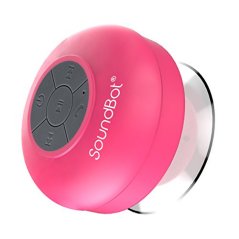 This stylish option gives you full access to your phone's music playlist and enables you to take a call.

Battery life is only 6 hours. Some reports that it loses ability to hold a charge over time. 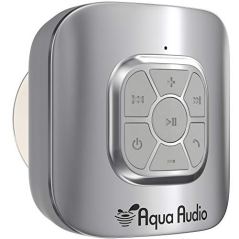 A sleek, waterproof design that provides excellent sound quality and a long range, so you can use it even if your phone is in another room.

Water shouldn’t get in the way of listening to your favorite playlist, but who wants to risk ruining a speaker while you bathe? Shower speakers let you take your music poolside or into the bathroom without worrying about water damage.

However, not all speakers are the same. “Waterproof” doesn’t mean the speaker can survive complete submersion for hours, and the sound quality varies by manufacturer and model. 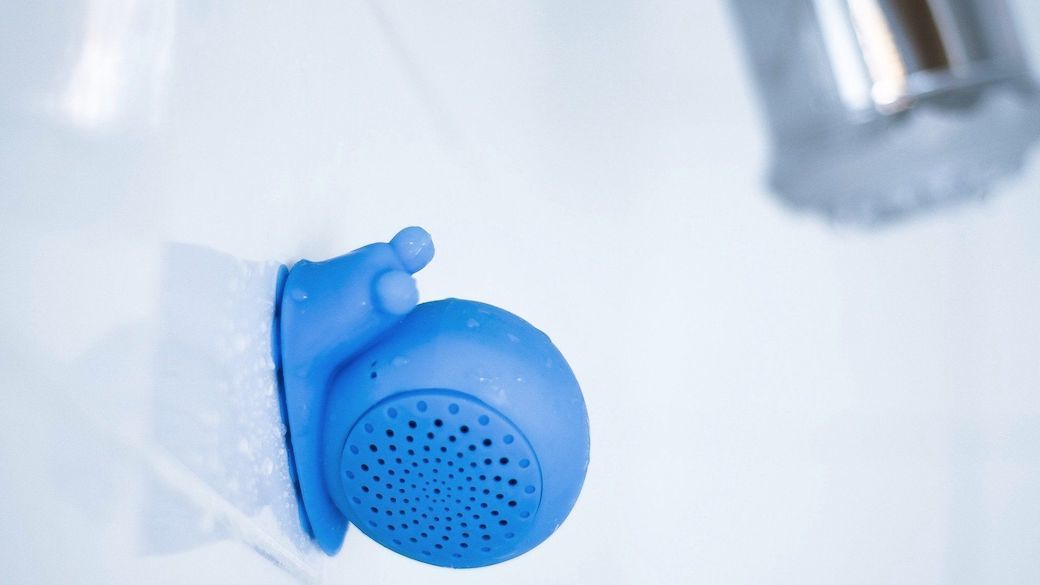 Shower speakers come in lots of fun shapes and colors – triangles, circles, and cylinders in a rainbow of hues – so you can choose a speaker that suits your décor or personality.

When Bluetooth technology first arrived on the scene, it was a serious drain on batteries. While that hasn’t changed, batteries have, and today you can find speakers with an excellent battery life of up to 12 hours. Keep in mind that the battery life advertised by the manufacturer is under ideal, controlled conditions, so expect a little less than listed on the packaging. Battery life is also an important consideration if you plan to mount the speaker in your shower. Long battery life will reduce the number of times you have to take down the speaker to recharge.

You can’t talk about speakers without addressing audio quality. Shower speakers have to be heard over the sound of running water. Therefore, a good shower speaker should have little distortion at the higher volume needed to cut through the ambient noise.

Showers aren’t exactly known for their roomy interiors. Smaller speakers won’t clutter the shower or get in the way, but small speakers don’t usually have the power to keep the audio crisp at high volumes. You’ll need to find a balance between size and sound that works with your listening standards.

The ingress protection (IP) rating tells you how water resistant or waterproof the speaker is. An IP rating includes two numbers: the first indicates how well the device resists dust and dirt (solids), and the second rates the water-resistance level (liquids). The higher the numbers, the greater the resistance. For example, an IP rating of 3 indicates that the speaker can withstand a spray of water at up to a 60° angle, whereas an IP rating of 8 (the highest) indicates that the speaker can be submerged in water over one meter deep for a prolonged period of time without damage.

While we don’t recommend taking a call while in the shower (that could be weird), you might want to check or send texts or take a call while cleaning the bathroom or combing your hair. A built-in microphone adds to the versatility of the speaker.

If you’re going to answer a call, you’ll need to change from speaker to microphone mode. Some speakers change easily between modes while others don’t. You want a speaker with a one-touch mode switch. You don’t want to fumble with menus or double touches with slippery hands.

All shower speakers need to be connected via Bluetooth to a device that streams music, such as a smartphone or tablet, and that device needs to be within wireless range. Range extends from 10 to 100 feet. In general, a longer wireless range gives more flexibility and ease of use.

Not all shower speakers have an attachment feature or device, but those that do may have one or more of the following:

The chances of a shower speaker taking an occasional tumble are pretty good. Look for one with a durable casing. Models that include a high IP rating for dust and debris in addition to water are the most durable.

Shower speakers start at less than $20. At the low end of the price range are small speakers that may have a suction cup or hook attachment, and some may have a built-in mic. These speakers can take direct splashes but won’t survive a dive in the bathtub.

At $20 to $50, the quality (both of construction and audio) increases significantly. These speakers may be larger, but that also means they can crank out more volume without distorting the sound. You start to see a few speakers rated IPX7, which can survive being fully submerged in a meter of water for 30 minutes.

Between $50 and $100, the shower speakers put out some excellent audio with omnidirectional sound, built-in mics, and enhanced bass. Some of these speakers have attachment features, but many are large enough that they’re not designed to hang from the wall or curtain rod. These are the speakers you might want to take to the beach or park where they need to be resistant to dirt and water.

Shower speakers that cost over $100 produce the best sound for models that are both portable and waterproof. Typically, these are larger, which enhances their audio, and they include omnidirectional sound, built-in mics, enhanced bass, longer battery life, and quicker charge times. 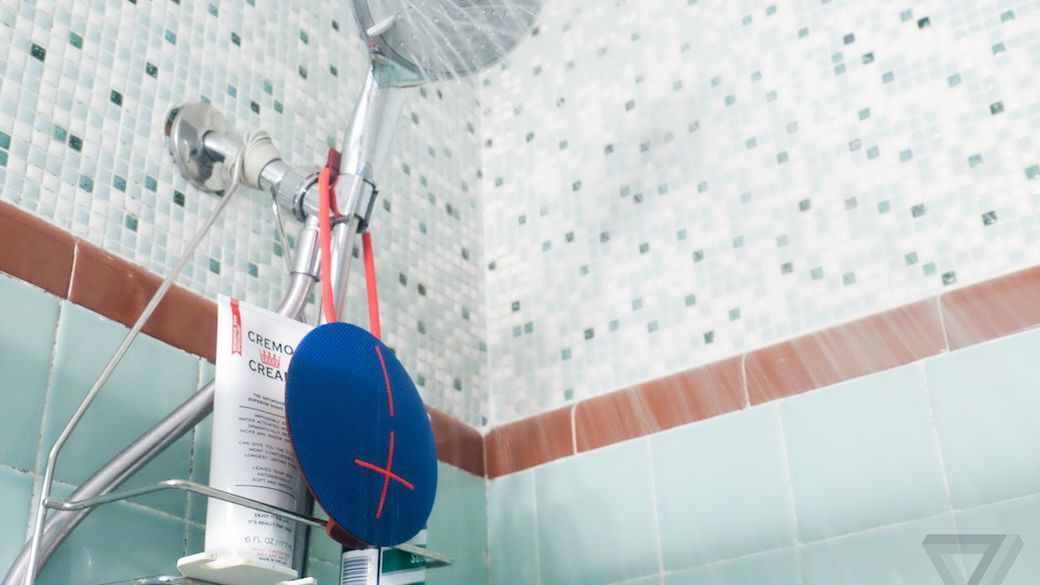 Tired of listening to music? Load your favorite karaoke app and take your shower vocals to the next level. If you need a little downtime, listen to an audiobook instead.

A. Some speakers have an auto-off feature while others don’t. This feature can save battery life if you’re prone to forgetting to turn off the speaker. Look for one that shuts itself off after 15 to 30 minutes of idle time.

Q. Can I find a shower speaker that’s a radio, too?

A. Some shower speakers also double as an FM radio, though not as many as you might think. However, if you have a radio that’s Bluetooth enabled, you can still listen to the radio through the shower speaker. You just won’t be able to change the station like you can on a speaker that doubles as a radio.

A. Only speakers with an IPX6 or higher rating can play underwater. A lesser rating may indicate that the speaker can survive submersion but only the highest-rated speakers will actually push tones through the water. 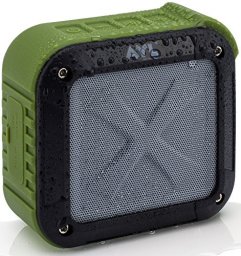 Best of the Best
AYL
Portable Outdoor and Shower Speaker
Bottom Line
This rugged little unit can go with you all day, from your morning routine to the great outdoors and everywhere in between.
Shop Now 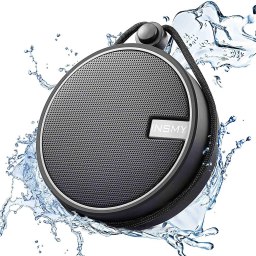 Best Bang for the Buck
INSMY
Waterproof Shower Bluetooth Speaker
Bottom Line
This portable speaker is equipped with suction cups that enable you to attach it to the wall of your shower.
Shop Now 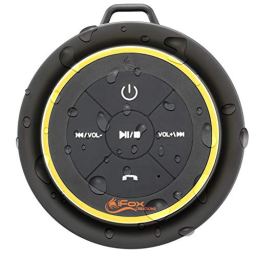 Top Pick
iFox Creations
Bluetooth Shower Speaker
Bottom Line
This durable model is easy to use and can withstand any amount of water without breaking or losing sound quality.
Shop Now 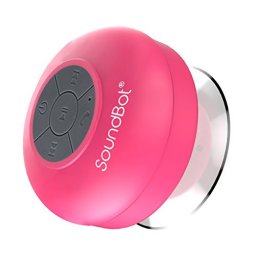 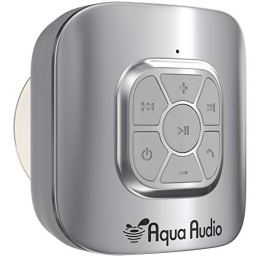 Top Pick
AquaAudio
Cubo Portable Waterproof Bluetooth Speaker
Bottom Line
A sleek, waterproof design that provides excellent sound quality and a long range, so you can use it even if your phone is in another room.
Shop Now 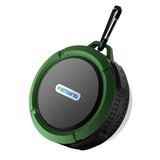 Top Pick
VicTsing
Shower Speaker
Bottom Line
A lightweight, water-resistant speaker that you can leave in the shower or take with you wherever you go.
Shop Now