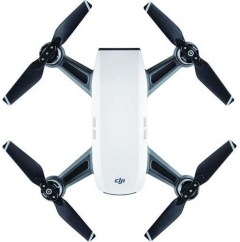 A great starter drone that is fairly user-friendly and holds a powerful camera for crisp images.

Easy to use with simple controls and automated flight modes making it a good starter hobby drone. The 5-megapixel camera is not the highest but is good for the price range. Has Bluetooth remote control.

No return to home feature.

Stacked with extremely useful features that make it a top-of-the-line hobby drone for any enthusiast.

Drone holds a great battery life to let users fly it for longer. Obstacle detection and avoidance protect the drone from any damage and makes it a beginner-friendly device. Automated shots ensure that users never miss an image.

Not the best video quality.

A lightweight, portable, and powerful drone that can fly for longer and does not require FAA registration.

The 4K camera is powerful and captures every feature while remaining stabilized to avoid blur. Comes with safety features like GPS that ensure users never lose their drone. FAA registration is not required. Has a large battery life.

Not the best color for JPG and video. 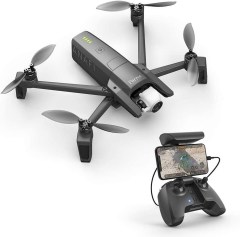 A small, folding drone that promotes portability and comes with a gimbal that stabilizes upward tilt.

Upward tilt gimbal is a great feature that reduces the risk of blur or shakes. Small profile is easy to store, and folding aspect makes it easy to transport. Can be charged with a common USB-C cable. Works on both Android and iOS.

Remote control devices have been popular for decades, ranging from model airplanes to dinosaur toy robots and anything in between. But aerial drones are the hottest RC devices currently in the market.

Some people use drones to record video for movies, to fight fires, or to monitor farm field moisture. But those are high-level drones, aimed at professionals. Hobbyists look for drones that offer more fun than function.

Hobby drones appear in all shapes and sizes, which sometimes makes the process of finding the right drone for your needs difficult. We at Best Reviews want to help you make the right choice when seeking a hobby drone.

Consumer-level drones are far different from military drones, as they’re smaller and easier to fly. Hobby drones have become exceedingly popular for all kinds of people to use.

The FAA defines a hobby drone as one that you would fly for fun, rather than for work or business. Within this designation, different rules exist for how you may use the drone.

A hobby drone fits in what the FAA calls the Fly for Fun category. With a hobby drone, the pilot does not have to obtain any kind of operational license.

However, you do need to register your drone with the FAA if it weighs more than 0.55 pounds, which most do.

If you will use a drone as part of your business, or if you sell photos you shoot with the drone, it fits into the Fly for Work category. It must be registered with the FAA, and you will need to obtain a pilot’s license.

How to pick the right hobby drone

When picking a drone, you need to think about how you’ll use the device. Look for a hobby drone that excels in areas important to your goals to gain the most value for your money.

Some hobby drones make use of a dedicated hardware remote controller. Others require you to use an app on your smartphone to control the drone.

Some drones have separate screens that allow you to watch where you’re flying through the camera, similar to a first-person pilot view. You may also be able to track the flight path through the smartphone screen and the remote control app.

Most hobby drones include multiple features that make them easy to fly.

For example, a drone that has a Return to Home feature will automatically fly back to your location when you trigger the command. Another command may allow the drone to hover in place automatically, simplifying shooting photos and videos.

Some drones will return to base immediately upon reaching a certain battery level, or a certain distance from the remote control. This means you don’t have to control the return flight.

The flight range of a hobby drone depends on the signal range from the remote control to the drone. Additionally, flight range depends in part on the drone’s battery life.

Your drone can only travel as far as it can reach while using no more than half of the unit’s battery power, so it has enough power to return to the base.

A GPS unit built into the drone makes it much easier to fly. The drone and remote control will use the GPS to activate features like Return to Home, for example.

A drone with a longer battery life allows you to fly for a longer period.

Most manufacturers provide a flying time estimate for a drone, based on battery life, to give you an idea of performance. You likely will want to purchase at least one extra battery, so you can fly with the second battery while the first battery charges.

Most people want a drone that can fly as fast as possible. The manufacturer will list the top speed in the product specification list.

Just remember that flying faster makes the drone more difficult to control, so start slowly, and build up speed as you become more experienced as a pilot.

Many hobby drones have cameras attached, allowing you to shoot photos and videos while flying. Additionally, this camera will provide a first-person view of the current flight path, to make flying easier.

Hobby drones are available in a wide range of price points. Even within the different categories of drones we’ve listed here, the price points vary tremendously. This means if you’re willing to shop around, you should be able to find an option that you can afford, but will also provide many of the features you want.

Extremely small drones aimed at children are more like toys, rather than actual hobby drones. These tiny drones offer a minimal amount of control while flying, which may frustrate people. Using these drones indoors works best.

You can find toy drones for $40 and less. Many of these toy drones weigh less than 0.55 pounds, meaning you don’t have to register them with the FAA.

A budget-level drone will have many limitations in operation, meaning only beginners or children will want one. Still, this can be a good type of drone for learning to fly.

Battery life tends to be five to ten minutes with a budget drone. Maximum speeds are likely less than ten miles per hour. A flight range for a budget-level drone will be less than 150 feet.

You can expect to spend $100 or less for this type of drone.

Did you know?
A quadcopter design is the most common type of drone sold to hobbyists. The design includes four propeller blades, for excellent stability — thus leading to better images.
STAFF
BestReviews

An intermediate-level drone works for a beginning pilot, because this type of drone doesn’t cost a lot and remains easy to fly. You’ll see battery life up to 15 minutes with this type of drone, although some will reach 20 minutes. Maximum flight speeds run at about 20 miles per hour. Look for a flight range up to 500 feet with an intermediate drone, although some can reach 1,000 feet.

You likely will pay $250 or less for this type of drone without a camera, and $400 or less with a built-in camera.

We don’t recommend a pro-level drone unless you have some experience with flying. These drones are so expensive that you don’t want to crash with one and wreck it while learning to fly. Battery life will run up to 30 minutes with a high-level drone. These drones are able to fly over a range of several thousand feet. Typical speeds for professional-level drones run around 30 mph, although some of these drones will hit 50 mph.

Most pro-level drones include really nice cameras. You can expect to pay up to $1,000 for this type of drone, although a few models will cost as much as a few thousand dollars.

Q. How is a hobby drone defined?

A. The FAA designates drones to separate hobby and recreational use versus business use. If you use a drone strictly as a hobbyist, you can fly without licensing yourself as a pilot. You do have to follow the FAA’s Fly for Fun guidelines and any local guidelines. Additionally, you will need to register the aircraft with the FAA if the drone weighs more than 0.55 pounds. If you plan to make money or create advertising for a business while flying the drone, you must register the drone with the FAA, and obtain a pilot license for yourself.

Q. What exactly constitutes a drone?

A. Although drones have an original basis of use in military service, drones sold to consumers are quite different. For hobbyists, any small aerial vehicle that you can fly and control remotely, without a pilot, would be considered a drone. Sometimes, you’ll hear drones referred to as Unmanned Aerial Vehicles (UAVs).

Q. Should I just buy the cheapest drone I can find if I’m a beginner?

A. Understandably, you may be leery of purchasing a costly drone at first because of concerns over crashing. However, most tiny, inexpensive drones are little more than toys. Flying such tiny drones outdoors will be difficult, as wind affects them substantially. Such drones really don’t offer the control and feature set of larger hobby drones. If you think you’ll be serious about this hobby at any point, you may want to spend a little bit of money upfront on a budget- or intermediate-level drone.

Q. What are some add-on costs I may have with a hobby drone?

A. Extra batteries are a common extra cost with a hobby drone. You then can keep flying the drone while the original battery charges. Should you crash — and you probably will — you may have extra costs for parts and repairs down the road. 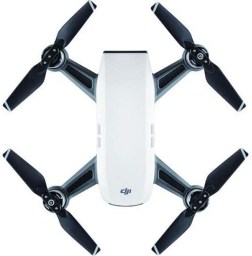 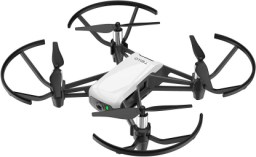 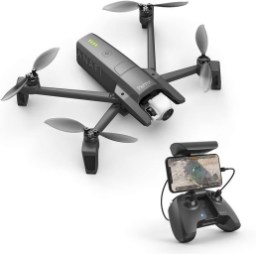