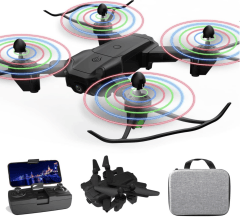 One of the better budget drones, this model boasts capabilities like 2K video, wide-angle shooting, and live image transfer.

Has 4K HD photo capture and 2K video recording, as well as a 120-degree wide-angle shooting range. Connects to phone app to shoot in real time. Features sensors to avoid obstacles and prevent collisions. Folds into compact size for easy transport and storage.

Some users believe it isn't worth the money. Some operational issues and can be difficult to control. 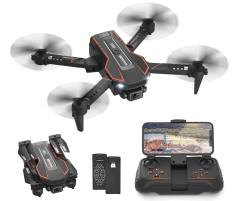 A solid choice for novices that offers basic features and is best used as a simple learning model.

It's fairly small, and because of its basic design, some more intermediate or advanced users should look elsewhere. 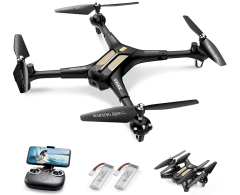 This choice is geared towards novice users or kids, as it's simple to operate.

Some reports of drone flying off on its own. Video quality is poor and construction feels cheap. 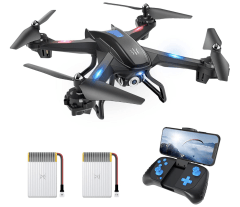 Users love this pick because it's simple to set up and control, and it feels like the quality is more than worth the price for a beginner drone. 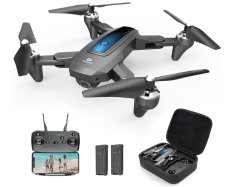 A great choice for beginners who want a simple and easy-to-learn drone.

Frequently drops WiFi connection. Can easily go off course in wind and fly on its own out of range. Low video quality.

Buying guide for best drones under $100

The unmanned aerial vehicle (UAV), or drone, continues to be one of the hottest tech items on the market. If you’ve always wanted to slip behind the controls of one but balked at the thought of plunking down hundreds (or thousands) of dollars for something that you were probably going to crash into a tree, this guide is for you.

There is a wide variety of full-featured drones now available for less than $100. While you won’t get the range or feature set of a more expensive option, an inexpensive drone is the perfect choice if you’re just starting out. It’s generally easier to operate than its pricier counterparts yet sturdy enough to withstand a variety of novice pilot mishaps. The majority also pack features that you might be surprised to find at this price point.

This guide will walk you through some of the features and capabilities you can expect to find in a drone under $100, in addition to some more general considerations when comparing UAVs. We also recommend several models, so you can spend more time learning to navigate around trees and less time worrying about finding a drone that matches your needs. 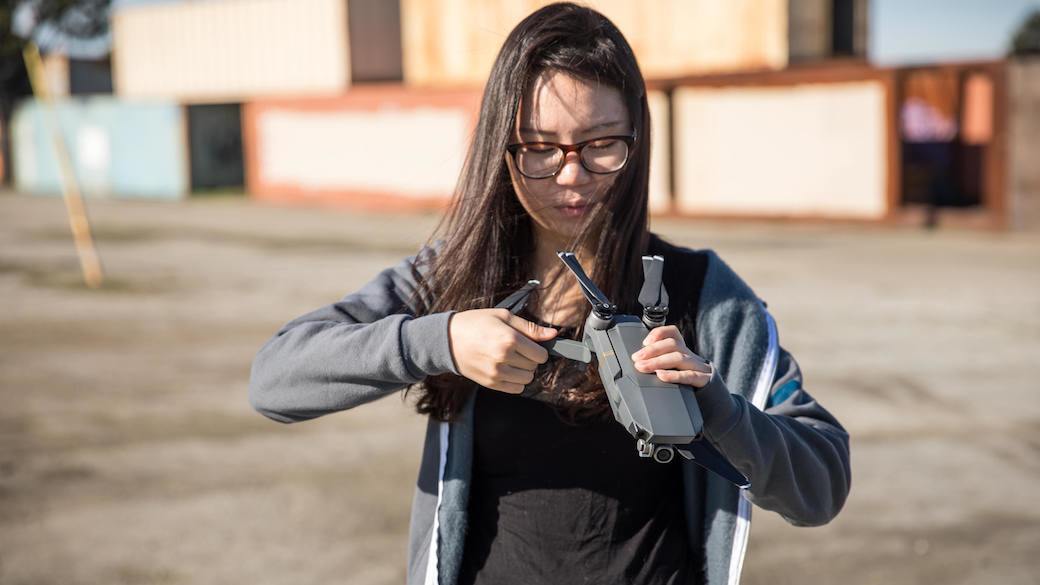 Some drones easily fold up to fit in a bag or even a pocket.

Try to find the sturdiest drone you can, particularly if you’re just beginning. It should be reinforced to withstand impacts suffered either while flying or transporting it. A compact, lightweight drone is easier to carry around and fly, but be careful it isn’t too light or you could lose control of it in even the mildest wind.

The flying range is the distance the drone can go before you start to lose control of it. You’re not going to see a tremendous flying range with drones at this price, but there can still be considerable differences among models. These drones are generally able to fly from 15 meters to 100 meters or so. Buy a drone with the longest range you can afford to give yourself more flying and photo/video options.

Any drone is going to be a handful when you’re first learning to fly it, but the makers of drones in this price range largely take the novice pilot into consideration with features that make the UAVs easier to handle. A feature called headless mode (which we cover below) helps you orient the drone, while multiple speeds enable you to start more slowly and gradually go faster as you gain more experience and confidence. Another feature, called one-key landing, can also save the day (and the drone) if your flight goes completely sideways.

Features of drones under $100

A drone with fewer features can be a plus for beginning flyers because you’re able to concentrate on the physics of keeping the drone in the air without being overwhelmed by extra bells and whistles.

First and foremost, you buy a drone to fly it, but in terms of features, the camera towers above all others. Not all drones in this price range come with a camera, but most will have some form of camera to take photos and videos. It’s the “some form” that varies a bit.

First, don’t expect the professional-grade photos and video that a more expensive drone will give you. Cameras on drones in our price range start at around 480p and top out at around 2MP, but this top end is the exception. The majority will be in the 720p range. Some feature extra perks like a wide-angle lens, but “no frills” is the general rule.

The other primary consideration is how the photos and video are stored after you take them. Drones with WiFi capabilities will work with your mobile device, letting you see and store media real-time on your phone. For those that don’t, you’ll store the media on the drone, usually on a microSD card. If this is the case, know how much storage the drone comes with and whether (and by how much) it can be upgraded.

With this feature, you can easily launch and retrieve a drone with the push of a button. This is a great option for beginners because you can quickly and effortlessly ward off a spectacular crash or cancel an errant flight path.

A gaming console-like device is the classic way to fly a drone, but these controllers are being replaced by apps that let you use your smartphone in addition to or in place of a controller. This is a great way to both see what the drone sees in real time and easily store video and still images from the camera.

This section could also be labeled “How long will the flight last?” Battery life/flight time isn’t that great for drones in general, but in drones at this price a flight time of less than ten minutes is common. A low-battery warning on the remote/controller will give you a heads-up when the battery is running low so you know when to bring the drone in for a landing. Research how long a charged battery will last, as well as how long it will take to recharge. Most drone batteries take from one to two hours to fully recharge.

Did you know?
Drones with built-in LED lighting will be easier to locate in low-light flying conditions.
STAFF
BestReviews

This is another area that you can use to differentiate one drone from another. Some common extras to watch for include the following:

The category is “Drones under $100,” so we already know what the ceiling is here. These drones start at less than $50, and at that price you’ll generally find models with a shorter range and flight time and fewer features. Most drones fall in the $60 to $100 range. At this price, a close examination of capabilities and feature sets will be necessary to determine which is right for you.

There is such a wealth of options in this rapidly growing field that we wanted to share a couple more drones that we like. The first is the Holy Stone HS170 Predator Mini RC Quadcopter. This UAV offers a great feature set at an economical price, and its fast charge time (under an hour) will have you back in the air in a hurry. The Force1 U45WF Quadcopter offers features rarely seen at this price point, such as a custom route mode that allows you to trace out a path on the screen that the drone then follows. We also love that this drone ships with three batteries to greatly extend your flying time. 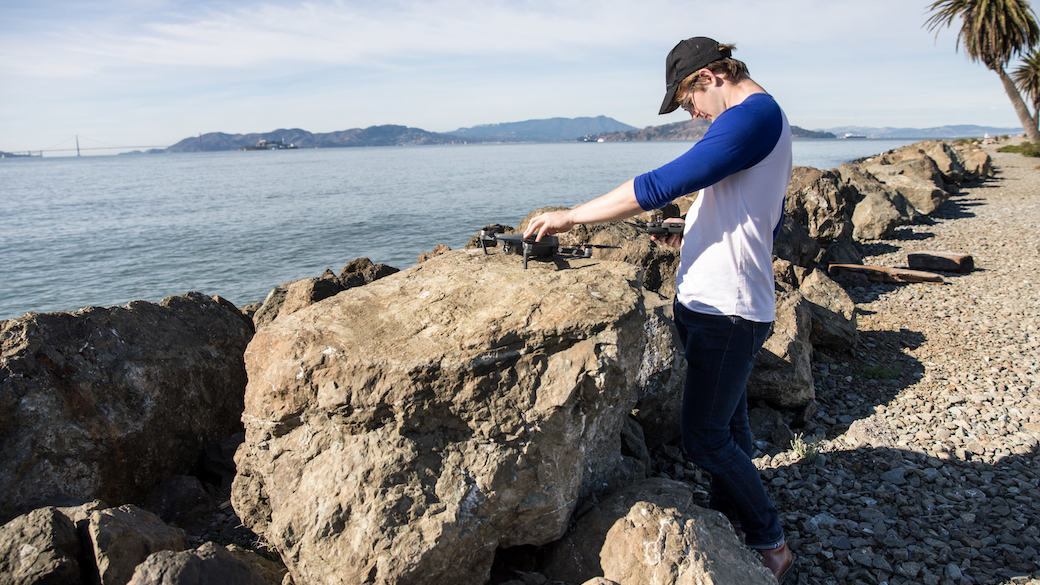 When you’re ready to move beyond the hobby stage, there are ways to earn money using a drone, including stock footage, real estate photography/video, aerial surveying, and wedding videography.

Q. What am I missing out on by buying a less-expensive drone?

A. Drones in this price range offer a variety of features and are great for beginners, but they really can’t compete with drones priced in the hundreds or even thousands of dollars. These drones offer longer flying times, faster speeds, more power, greater range (some measured in miles!), as well as more robust cameras and advanced features such as GPS and obstacle sensing.

Q. Do I need a license to fly a drone?

A. The law is a bit murky here in terms of licenses and registering of drones, and as such your best bet is to check local regulations and brush up on the latest requirements from the FAA. In general, you won’t need a license if you’re flying a drone recreationally and the drone weighs under 55 pounds. Anything heavier than that and you might need to register it. If you’re trying to earn money with your drone, you’ll need to be licensed. The FAA is more than willing to fine or even jail those who violate drone rules, so this is definitely not an area you should ignore.

Q. Where can I fly my drone?

A. Sadly, the list of places where you can’t fly it is going to be significantly longer, but in general, try to find an open area with no people around. Avoid residential neighborhoods, commercial areas, schools, events of all kinds, people, and airports (stay five miles away from these). Again, you’ll find more detailed information on the FAA website. 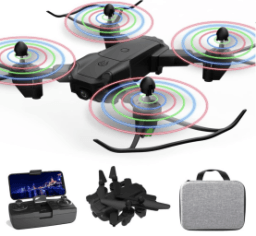 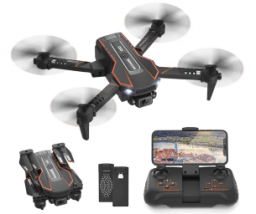 Best Bang for the Buck
AVIALOGIC
Mini Drone with Camera for Kids
Bottom Line
A solid choice for novices that offers basic features and is best used as a simple learning model.
Shop Now 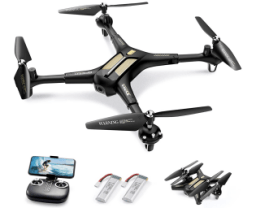 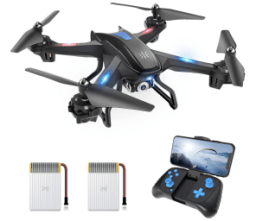 Top Pick
UranHub
Drone with Camera for Adults HD 2K Camera
Bottom Line
Users love this pick because it's simple to set up and control, and it feels like the quality is more than worth the price for a beginner drone.
Shop Now 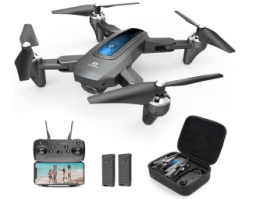 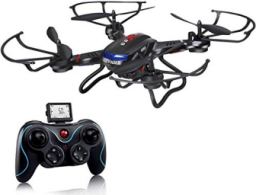 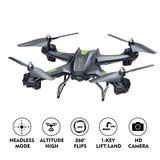 Top Pick
LBLA
FPV Drone
Bottom Line
The LBLA drone incorporates many of the exciting features seen in other models for far less, making it a good option for kids, families, and first-time-fliers.
Shop Now 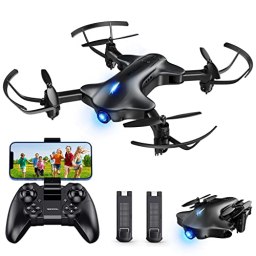 Top Pick
DROCON
X708W FPV Training Quadcopter
Bottom Line
Its simplistic controls and user-friendly features make it another nice option for first-time drone fliers, but veterans will have a blast with the DROCON once they disable the “training wheel modes.”
Shop Now 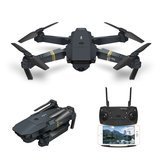 Top Pick
EACHINE
Drone
Bottom Line
Although it is clearly made for more experienced drone fliers, the EACHINE is equipped with a great camera, convenient controls, and plenty of features to ensure that the drone returns safely after each adventure.
Shop Now 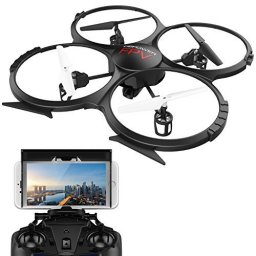