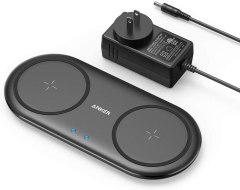 A portable, affordable, and reliable dual charger with 10 watts of power.

Charges newer iPhones at 7.5 watts within 90 minutes and older models within 2 hours. Charges Samsung phones at 10 watts within an hour. LED indicator verifies phones are charging. Works with Qi-enabled phones and most cases up to 5 mm thick.

Some complaints of overheating. 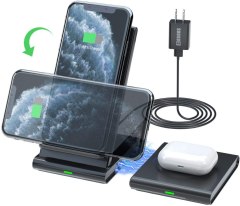 A dual charger with removable magnetic parts and safety certification.

QI wireless charger for Apple, Samsung, and Google phones, Galaxy and Samsung watches, and headphones. Charges 2 devices at once in landscape or portrait mode. Features anti-slip material. Certified to prevent overheating and radiation.

Offers a slower charge than some other options. 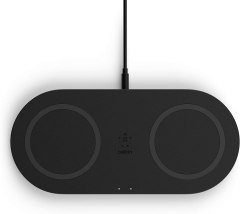 A 10-watt charger with LED indicators and Qi compatibility.

Easy setup. Uses up to 10 watts of power on each side with fast and reliable charging for most smartphones. LED-indicator for correct positioning. Compatible with non-metal cases up to 3 mm. Available in black or white.

A Qi-certified charger for 2 devices with a USB port to charge an additional device.

Charges 2 devices wirelessly and 1 device via USB port. Uses 10 watts of power. Works well with Apple, Samsung, and Google devices. Works with phone cases up to 3 mm thick. Surface is soft and nonslip. Features rubber around the edge.

Phone has to be positioned precisely to charge. 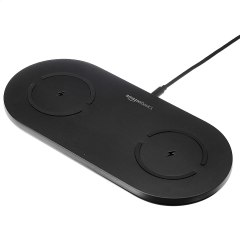 Inexpensive double-charger from a bargain brand.

Compact design allows for two 5W, 7.5W, or 10W charges, depending on the build. Light on features, but heavy on performance. Includes AC adapter, but buyers report increased performance with other power sources.

Some find phones hard to place into proper charging area. Others reports of unpleasant beeping and lack of durability.

These dual pads have two separate spaces for charging two devices at one time. A double wireless charging pad may be just the step up you need to begin using this cool technology. 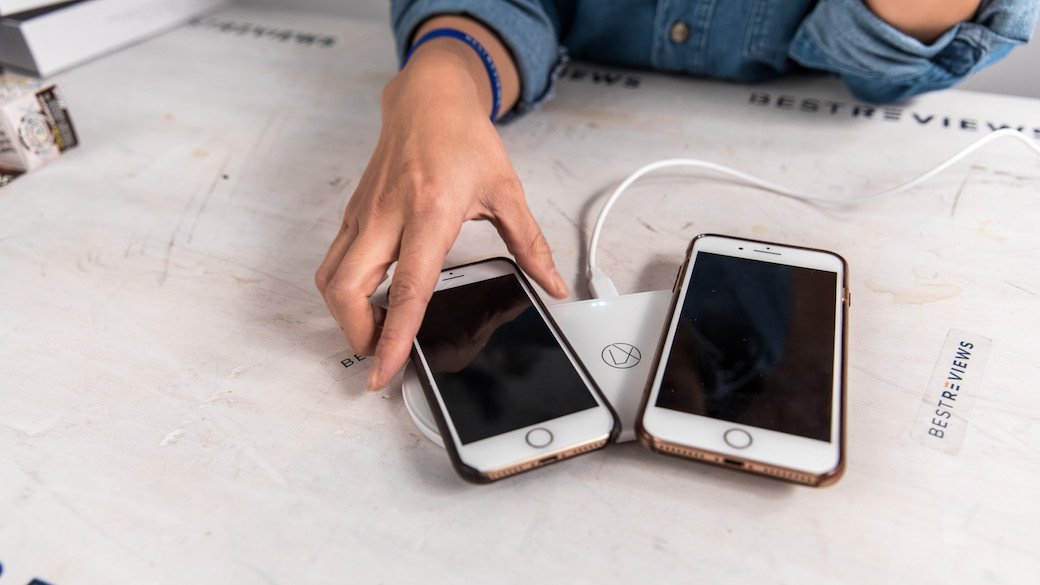 A double wireless charging pad is a smart idea if you want to create a charging station in your home that’s free of tangled cords.

All wireless pads – single, double, and triple – work in a similar manner. The wireless charger transfers electrical power from the charging pad to the battery using electromagnetic induction. This works through a copper coil inside the device and the pad. Even though the coils don’t touch, they must be very close together and perfectly aligned to pass electrical power between them.

Even though all the double wireless charging pads use the same technology, there are a few things to consider regarding charging speed.

Here are some things to consider when choosing a double wireless charging pad.

Compatibility with the Qi standard must be built into the device at the time of manufacture. It’s not something you can add later. If you have an older phone or charging pad, you may have heard of PowerMat technology. This is an older wireless charging standard that was in competition with Qi. However, the industry has made Qi the primary standard now.

You’ll appreciate having an indicator light on your double wireless charging pad. This light tells you that the coils in the devices and the pad are properly aligned so that charging can start. Without an indicator light, you may think the devices are charging when they aren’t. You could then have a dead battery just when you need your device most.

People like the convenience of setting their smartphones on a charging pad versus taking the time to plug-in charging cables. However, a charging cable is still faster and more reliable than a wireless pad for charging the batteries in your devices.

"Because charging pads are well built, you can expect a few years of use out of one. Some will last several years without breaking down. In reality, the technology in the pad probably will become obsolete before the pad wears out."
STAFF
BestReviews

Inexpensive: The least expensive dual wireless pads cost between $20 and $40. Don’t expect many extra features on these devices.

Mid-range: For more expensive models, expect to pay between $40 and $75.

Expensive: A few models cost $75 to $100. Pricier double wireless charging pads have features like indicator lights or an extra port for plugging in a third device. They may have a vertical charging area, so a smartphone can charge while standing up, making it easier to see the screen. Some have Fast Charge capabilities or features aimed at working specifically with smartwatches, too. 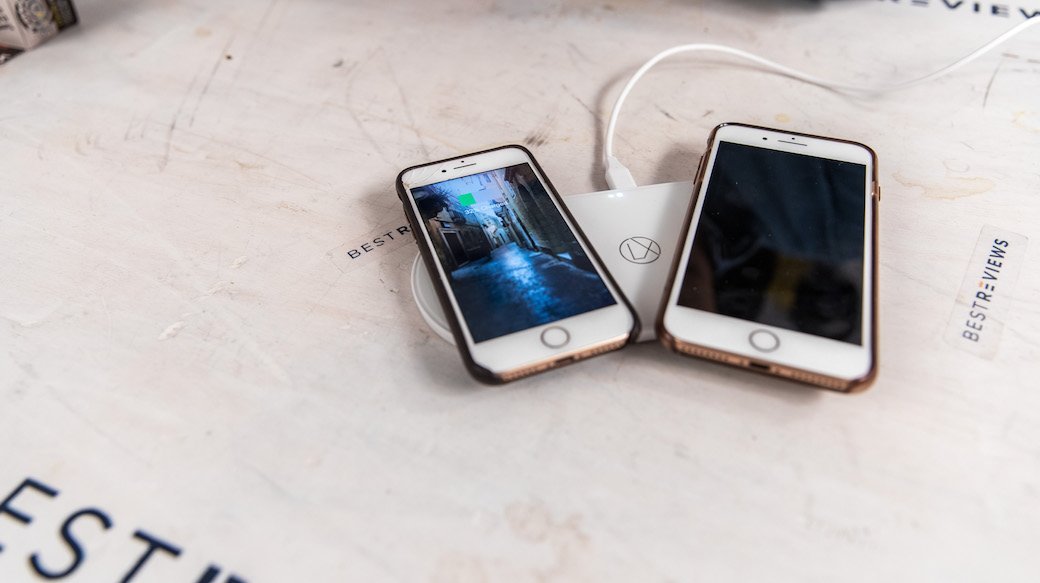 Dual charging pads can be a convenient choice if you have two mobile devices that you need to charge simultaneously.

Q. I have an older phone. Can I upgrade it to work with wireless charging?

A. Because wireless charging requires a certain type of hardware, older phones cannot be upgraded. You must have a device that has wireless charging compatibility built into it. However, some companies make devices that plug into the USB port, through which you can wirelessly charge. Of course, this doesn’t eliminate the clutter of cords.

Q. What are some cool features of dual wireless chargers?

A. We’re seeing some chargers that have vertically aligned charging pads on one or both sides. This allows you to easily see and use your smartphone as it charges. Some double chargers are shaped specifically to hold a smartwatch on one side and a smartphone on the other. Some even have a port on the edge so you can charge a third device through a cable.

Q. Are there disadvantages to double wireless charging pads?

A. Not any significant ones. These devices don’t cost a lot, but they do cost a bit more than single wireless pads. They work well for anyone with multiple mobile devices. However, the biggest problem is that it sometimes can be difficult to line up the devices properly on the pad. And a wireless charger doesn’t quite match the charging speed of charging over a wire. 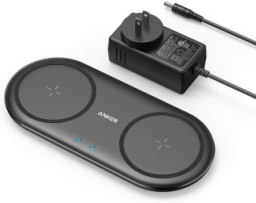 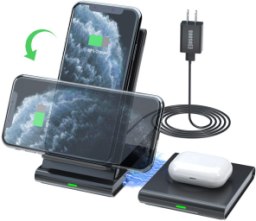 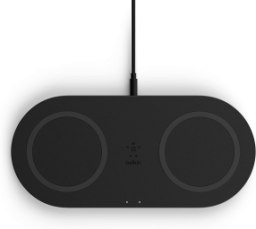 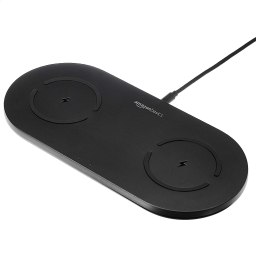 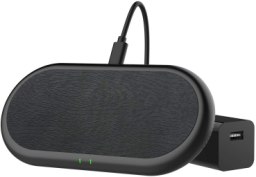 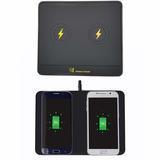 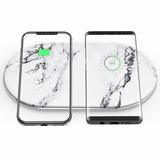 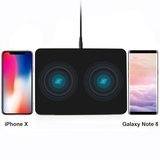