A full-featured and powerful interface that stands out for its solid construction and stability.

Software is a bit minimal, with few options. Some felt that the mic preamp was too quiet.

This solid audio interface is simple, affordable, and very effective at what it does.

Doesn't come with a USB cable. Output has very little boost. Some buyers say this option makes too much random noise.

Comes with a wide range of software to get you up and running quickly on both Mac and PC, but it really shines as an iPad audio interface.

Does not charge your iPad when you're using it. Doesn't offer 2-channel capture on iOS. Some found there is a fair amount of latency when using MIDI. 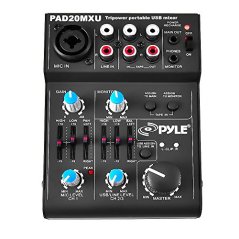 Despite poor documentation, this is a versatile 5-channel interface and mixer that offers a lot of bells and whistles.

Features include 5 channels in all, with a 2-band EQ and pan on each channel. Pro-level audio sound, with ultra-low noise design. Multiple inputs. 18-volt phantom power. Battery option is rechargeable. For Mac or PC.

There is no way to monitor your signal while recording. The documentation is a little limited.

Geared towards guitarists, this interface offers simplicity and an extensive software package that works for Mac and PC.

Works well with a Mac, but the PC drivers leave a bit to be desired. Some found that the audio quality can be spotty with this option.

The magic of music doesn’t just happen in professional recording studios. It happens in living rooms, on front porches, in parks, and everywhere in between. If you’re interested in recording music at home, though, we recommend a USB audio interface. While professional studios utilize purpose-built, multi-thousand dollar recording consoles, home recording studios rely on audio interfaces to translate the music you play into something your computer can properly understand.

Why? Computer audio processors don’t typically have the right inputs for recording microphones and instruments directly, resulting in extremely quiet recordings, muted tones, or static when you plug in directly. Thankfully, USB audio interfaces provide these inputs, plug right into your computer via a USB port, and convert analog, real-world audio into computer-friendly digital audio. Think of these products as mediators, allowing all your components to speak the same language to facilitate the recording process. 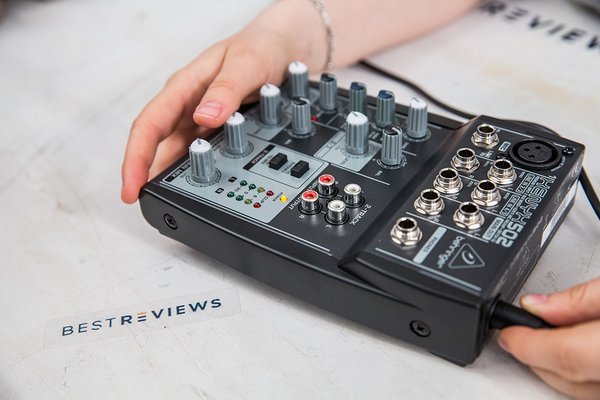 The professional audio standard of today is 192kHz or 24-bit. 24-bit recordings eliminate almost all noise and provide plenty of headroom for dynamic performances. Thankfully, 24-bit audio interfaces are extremely attainable, allowing you to churn out professional-quality tracks right from home.

The number of inputs and outputs on an interface determines how many instruments it can handle at one time. If you’re a solo artist recording acoustic guitar, a basic two-channel input/output configuration is perfectly sufficient, and the good news is it won’t break the bank. For recording guitar and vocals side-by-side or an ensemble, you’ll need additional inputs.

Not all inputs are created equal, however. Some are dedicated XLR/TRS inputs for microphones, while others feature a 3.5mm jack for instrument cables or unique MIDI plugs.

Each channel generally has a preamp attached to it that converts weak signals into strong signals. Microphones need strong preamps with lots of gain (volume); otherwise, your records will turn out extremely muted and dull. Guitars and basses need less gain, but a preamp is still required. Finally, keyboards and synthesizers need even less gain, but they may require some amplification to match studio level or recording consistency.

High-quality recordings are extremely attainable even at home, and high-fidelity tracks free of noise and hissing immediately bestow a sense of professionalism. Recording quality is measured in something called sample rate, which boils down to the number of digital “pictures” taken of the audio each second. Common sample rates are, in ascending quality, 48kHz, 88.2kHz, 96kHz, 176.4kHz, and 192kHz (also called 24-bit). 192kHz/24-bit is essentially the standard sample rate for modern interfaces above the entry level.

In addition, keep your eye out for low-latency units. Latency effectively means delay. It measures how long it takes for the music you play to travel through the audio interface to your recording software and back again, out through your speakers or headphones. Any significant latency can negatively impact the performer’s ability to play along with a track and layer tracks efficiently.

Audio interfaces require computers to actually record data, and if your interface doesn’t mesh with your system, you’re back to square one. Units with both PC and Mac compatibility are quite common. But do yourself a favor and double-check before buying anything — dual compatibility isn’t ubiquitous.

While the majority of audio interfaces either source power directly from your computer or a dedicated adapter that plugs into a wall socket, there are options with rechargeable batteries. These are mainly useful for DJs who want to do swift setups and soundchecks without the rest of their gear, but musicians of any style may appreciate the added portability of battery-powered products. 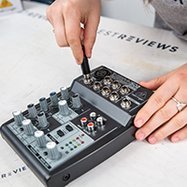 Did You Know?
If you want to plug a guitar or keyboard directly into an audio interface, you need to plug into the correct input. “Instrument” or “Hi-Z” inputs are best-suited for this, as “line-level” inputs are better for outboard processors, headphone amps, and studio monitors. Use XLR/TRS inputs for mics.
Staff
BestReviews

The quickest route to recording at home is an audio interface that includes Digital Audio Workstation (DAW) software. Some examples of included DAW software are Garageband, Ableton Live, Pro Tools, and Adobe Audition. Beyond the box/software bundle, all you will generally need to start recording are some cables.

Guitarists, bassists, vocalists, and a myriad of other musicians are often boosted by effects that shape or enhance their tone. Various interfaces have their own built-in effects, however, forgoing the need for additional pedals and switches. Examples of built-in effects include distortion, reverb, and delay. Some products even have pre-recorded samples for you to play along with or use to build background sounds for your compositions.

Standard equipment for an audio interface is a volume (gain) knob for each input, and perhaps a mix knob if there are multiple inputs at play. Certain models go the extra mile though, featuring several EQ knobs (EQ is short for equalization) to help you dial in your desired tone. EQ allows you to adjust the levels of various audio frequencies in your recorded material to enhance the existing sound or create a distinctive effect.

Condenser microphones are fantastic for vocals and quiet instruments, but they almost always require an input with phantom power. This is because they have active electronics that require an external power source, whereas dynamic mics do not. If you’re interested in recording with one, choose an audio interface with this feature.

Recording music in a professional studio is expensive, as you’re essentially renting equipment and paying a producer for their services. With a USB audio interface, you own the equipment and you are the producer, significantly lessening the load on your wallet.

Inexpensive: At about $60, you’ll find low-end audio interfaces with one or perhaps two inputs for simple recording. While these are effective for singer-songwriters and other solo artists, experienced musicians may find the recording quality slightly lacking in budget units. You can also find basic DJ sound controllers and interfaces for PA monitors in this price range.

Mid-range: Jump up to $100 or so and you’ll be rewarded with more inputs, higher-quality preamps to increase your input gain with less noise. Units in this range commonly have a smattering of included effects and plugins, too.

Expensive: At the top of the entry-level consumer range, expect to spend $150 to $250 or much more. Interfaces in this price segment typically boast even more inputs for ensemble recordings, as well as built-in effects and samples, included DAW software, and boutique-quality preamps for crystal-clear results. 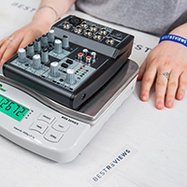 Did You Know?
USB 2 connections are plentiful in audio interfaces, but there are other options. Audio interfaces that use Thunderbolt, USB 3, USB-C, PCIi, and even Ethernet may transfer data quicker than USB models.
Staff
BestReviews 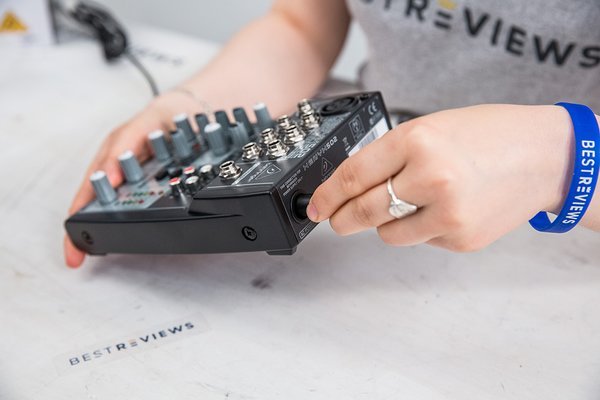 You may see the term “ADAT input” when shopping. ADAT, which stands for Alesis Digital Audio Tape, is a technology that dates back to eight-track VHS tapes from the 1990s. Some audio interfaces use a modernized version of ADAT tech today, as it allows eight-channel units to expand to 16 or even 24 channels. This technology is not widely used or required for the vast majority of home recordings.

Q. I have a USB microphone. Do I still need an audio interface to record music?

A. The beauty of a USB mic is that it effectively has an audio interface inside it, boosting its signal enough to record vocals or instruments at full volume. Simply plug in the mic to your USB port, boot up DAW software, and you’re set to record. That said, the quality of USB mics is generally nowhere near as good as that of a proper studio microphone and audio interface. You may notice excess noise in your recordings, and instruments may feel flat and dull compared to their real-life intonation. Still, a USB mic is a decent choice for demo-quality recordings, practice recordings, or some lo-fi styles.

Q. What other equipment do I need to record at home?

A. Your recording setup greatly depends on the type of music you aim to produce. Singer-songwriters won’t need much more than an instrument, a microphone, an interface, a computer, and a few cables. DJ setups are significantly more complex with turntables, mixers, dedicated DJ software, and all the necessary connections. Full bands may require a set of studio monitors as well multiple microphones, mic stands, and even sound dampening dividers to prevent sound spill and unwanted feedback between the various microphones. And while fancy equipment may result in high-fidelity results, you don’t always need to spend thousands to spread your art. Sometimes, a microphone and a simple interface is all that’s required.

Q. Recording artists often use external preamps instead of an audio interface’s built-in preamps. Why?

A. Preamps that come stock in USB audio interfaces are adequate for the purposes of the majority of non-professional musicians. That said, external units offer several advantages for the money. The first example is improved sound quality due to more sophisticated circuitry. Simple preamp circuits become more distorted when you crank the gain, which can be necessary when recording low-output dynamic and ribbon microphones. External preamps also boast more gain in general and produce less noise when cranked.

In addition to those tangible advantages, external preamps can also have completely unique tonal qualities of their own, allowing musicians and producers to shape their sound in a new way. Built-in preamps, by contrast, are typically clean and transparent in tone, which can be a good or bad thing depending on your style. Are you looking for a vintage 1970s tube-amp sound? Perhaps an external preamp with some character is right for you. If you’re aiming to produce contemporary electronic music, maybe not.

Best of the Best
Mackie
Onyx Producer 2-2 2x2 USB Audio Interface
Bottom Line
A full-featured and powerful interface that stands out for its solid construction and stability.
Shop Now 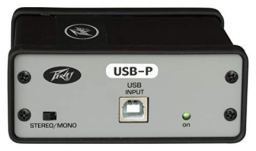 Best Bang for the Buck
Peavey
USB Audio Interface
Bottom Line
This solid audio interface is simple, affordable, and very effective at what it does.
Shop Now

Top Pick
PreSonus
AudioBox iTwo 2x2 USB/iPad Audio Interface
Bottom Line
Comes with a wide range of software to get you up and running quickly on both Mac and PC, but it really shines as an iPad audio interface.
Shop Now 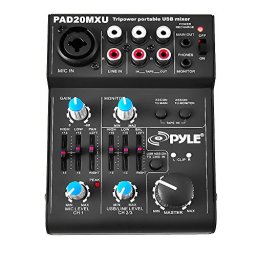 Top Pick
PYLE
5 Channel DJ Audio Mixer
Bottom Line
Despite poor documentation, this is a versatile 5-channel interface and mixer that offers a lot of bells and whistles.
Shop Now