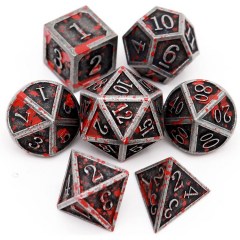 This set’s blood-splattered design is perfect for longtime adventures who’ve seen more than their share of battles.

The dice are made of metal which gives them a nice heft in the hands, not to mention makes them extra-durable. The numbers are large, bright and clearly separated from the edges so anyone at the table can easily read them.

Some customers reported the edges to be sharp enough to cut fabric tables or even prick a finger if you aren’t careful. 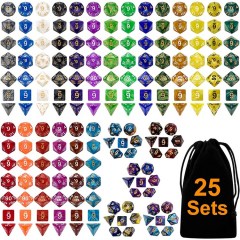 This gargantuan 175-piece set contains enough dice to make up 25 individual dice sets and each set is a different color.

The numbers on each die are either white, black or gold to stand out against the backing color and engraved rather than being the stickers some dice sets use. A large black flannel bag is included to hold all the dice.

You need to buy 25 dice bags separately if you want each of the 25 sets to be kept apart from the others. 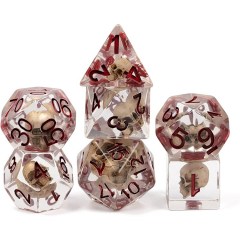 These dice come in 23 designs, all of which are clear and have little skulls and such inside.

The dice are made from ecologically friendly resin, some of which are plain while others have slight tints to them. The items inside include human skulls, cow skulls, dragon heads and mushrooms in different colors and occasionally wrapped in other items like seaweed or flowers.

The items inside aren’t always centered, and while this doesn’t affect how the dice roll it can bother those that prefer perfection. 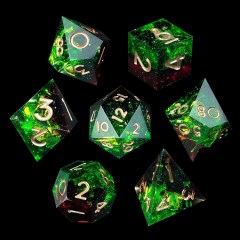 Each die in this set is sanded and polished by hand and closely inspected for quality before being shipped out.

There are six designs to choose from. Each one has a different font color so the dice are always easy to read at a glance. They come in a foam-filled storage case with cutouts for each die.

Some customers found the dice too light, plus the D4 die is even lighter at 2 grams compared to the others’ 5-7 gram weights. 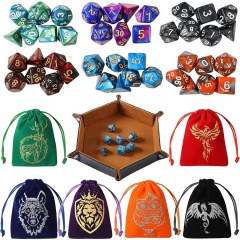 This set includes everything needed for up to six people to play Dungeons and Dragons together.

Each of the six dice sets are a different color and come with a color-matching bag emblazoned with an animal to store them in. A velvet-lined dice tray that can fold down flat for easy storage is also included.

Some customers received bags with the images printed upside down. Others didn’t receive all six sets of dice.

Seven dice have fueled tabletop role-playing games for decades, and while they are often associated with Dungeons & Dragons (D&D), they’re used in a variety of games. Every set contains the same seven dice, usually with matching colors or themes.

While there are some considerations about balance and material, any tabletop role-playing gamer knows that picking dice that look great on the table is a key factor. While most are made of plastic, some are made of other materials like wood or metal.

D&D dice sets come in a seemingly limitless number of colors and styles. While any set will function for your next campaign, there are some considerations when choosing dice that you’ll likely use for years. A good shopping guide and recommendations can help. 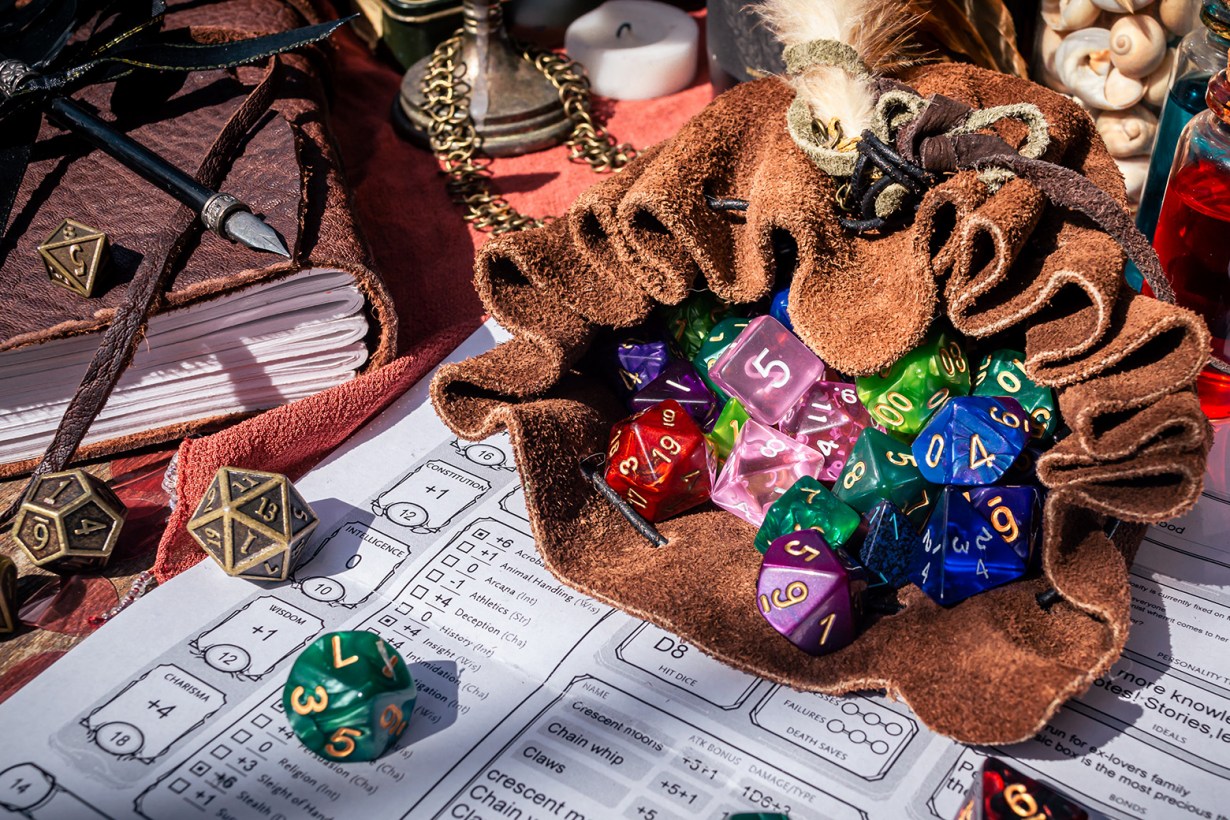 A matching set of dice has a striking look, but by mixing sets you can color-code the dice to find the right size more easily.

How to buy the best DnD dice set

Each player has their own “best” when it comes to dice sets. Understanding what each set contains, how consistently the dice roll, and how easy they are to read are the most important factors to consider when shopping.

What is a DnD dice set?

Also known as polyhedral dice, D&D dice come in sets of seven with various numbers of faces and values. For simplicity’s sake, the names of the dice are usually abbreviated (for example, a 6-sided die is called a d6).

Abbreviated die names are more than just shorthand used when discussing dice. They are reflected in tabletop role-playing games (TTRPG) and character sheets as well. For example, when a player is to roll “2d6” to determine damage, this means they should roll a 6-sided die twice.

Just because a die looks geometrically sound doesn’t mean it will reliably produce random rolls. Some manufacturers advertise “balanced” dice that have been tested to roll without bias so you know your dice aren’t working against (or for) you. However, the difference between a balanced die and a regular die is so miniscule you’re unlikely to notice.

As you’re comparing different sets, remember that readability is just as important as looks. Think about the lighting of the environment you play in most. Is it well-lit from several angles, does it rely on natural light, or is there a single light source?

The higher the contrast between the numerals and the color of the die, the easier it will be to read. Numeral size is a factor as well, as is the typeface used. Thematic typefaces and dice with additional decorations and details can be more challenging to read, especially in low light.

Features to look for in DnD dice sets

Now that you know what type of dice you need, you get to do the fun part of choosing from the variety of patterns, colors, materials, and themes of D&D dice sets.

Engraved: Almost all D&D dice have engraved numerals. The numerals are recessed into the die and usually painted a different color from the background.

Inked or printed: These faces aren’t molded, but instead the numerals are painted on the flat surfaces. This gives the die slightly more mass, and some players prefer inked faces because each face is weighted equally, in theory resulting in more balanced rolls. However, ink is more likely to wear off flat dice that aren’t engraved or embossed.

Embossed: These die faces have raised numerals (and often edges) rather than recessed numerals. They have a bit more texture and are often more distinctive on the table.

Color: Think of a color and there’s a good chance there’s a D&D dice set in that color. There are also multicolored dice with different patterns.

Transparency: Most dice can be divided into two categories: opaque and transparent. Opaque dice have one or more solid colors and are usually highly readable. You can see through transparent dice, and they are often tinted in different colors. Some transparent dice also have color fills and swirls inside. Less common are dice filled with objects like eyes, gears, or skulls. A few have liquid cores filled with glitter or other substances that continue to swirl after each roll.

Pattern: A pattern gives the dice a bit more texture. There are a handful of common patterns, including marbled, with a blend of colors or tones, sometimes with a bit of transparency; speckled, with one dominant color and speckles in a second color; and glitter which isn't so much a pattern as an effect, but it gives the dice a shimmery look. Opaque dice have glitter on the surface, while transparent dice usually have glitter throughout.

While most dice don’t have a specific theme, some are designed to evoke a certain style or to pair well with a TTRPG class, such as warrior or wizard. A themed dice set can make for a more immersive game-playing experience, though you might not want to use the same themed set for different games. Common themes include elven, dwarven, dragons, and runic.

Symbols: Rolling a 1 or a 20 is always a dramatic moment. Some dice replace these numbers with a symbol like a skull, dragon, or weapon.

Shapes: D&D dice aren’t limited to the six traditional polyhedrons. Some dice sets are in the shape of cylinders, spheres, crystals, potions, and bullets. Dice can also be hollow with a smaller die inside.

The material typically has the biggest impact on cost.

Acrylic: The most affordable dice are acrylic, which is easy to pour into molds and typically results in a consistent density. However, acrylic dice can show wear after extended use.

Resin: This weighs about the same as acrylic, but it’s a harder material, resulting in finer details and a shinier texture. These dice are usually more expensive than acrylic dice.

Metal: One of the most popular materials among dice collectors and TTRPG enthusiasts, metal is weighty and loud as it rolls on the table. Most metal dice are made mostly of zinc alloy. When purchased in sets, metal dice are more expensive than resin. They’re often painted for a two-tone effect. Embossed metal dice are common.

Glass: Similar to metal dice, glass dice are heavy and clatter loudly on most hard surfaces. They may be frosted or clear. Most glass dice are made in molds and have numerals etched into the surface.

Gemstone: Many of the most expensive dice sets are made of gemstones. Common gemstones include amethyst, opal, and obsidian, but a synthetic gemstone is often used rather than natural stone. If you prefer authentic gemstone dice, most manufacturers make note of whether the gemstone is natural. Using these dice can chip them, so many people opt to only display their gemstone dice.

Wood: Wooden dice are made of a variety of woods, including sandalwood, walnut, and teak. 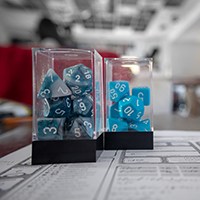 DID YOU KNOW?
“Sharp edge” or “precision” dice have crisp, sharp corners and edges rather than rounded ones, giving them a high-quality feel.
STAFF
BestReviews

How much do DnD dice sets cost?

D&D dice sets can be quite affordable or luxury collectors’ items that are more suitable for display than use.

Most acrylic dice sets and a few resin sets cost $7 to $15. Even in this range, you can find unusual patterns and colors, but themed sets are less common at this price.

High-quality resin sets, a few metal dice sets, as well as multipacks of acrylic dice sets cost $15 to $30. Transparent dice with objects inside are common in this range, as are themed sets.

Dice sets made of resin, metal, glass, wood, or gemstone cost $30 to $100. Their designs vary widely, but most feature intricate patterns or multiple colors.

Rolling a 20 on a d20 is often called a “nat 20,” short for “natural 20.” Any roll that results in a 20 with or without modifiers usually results in a critical hit. 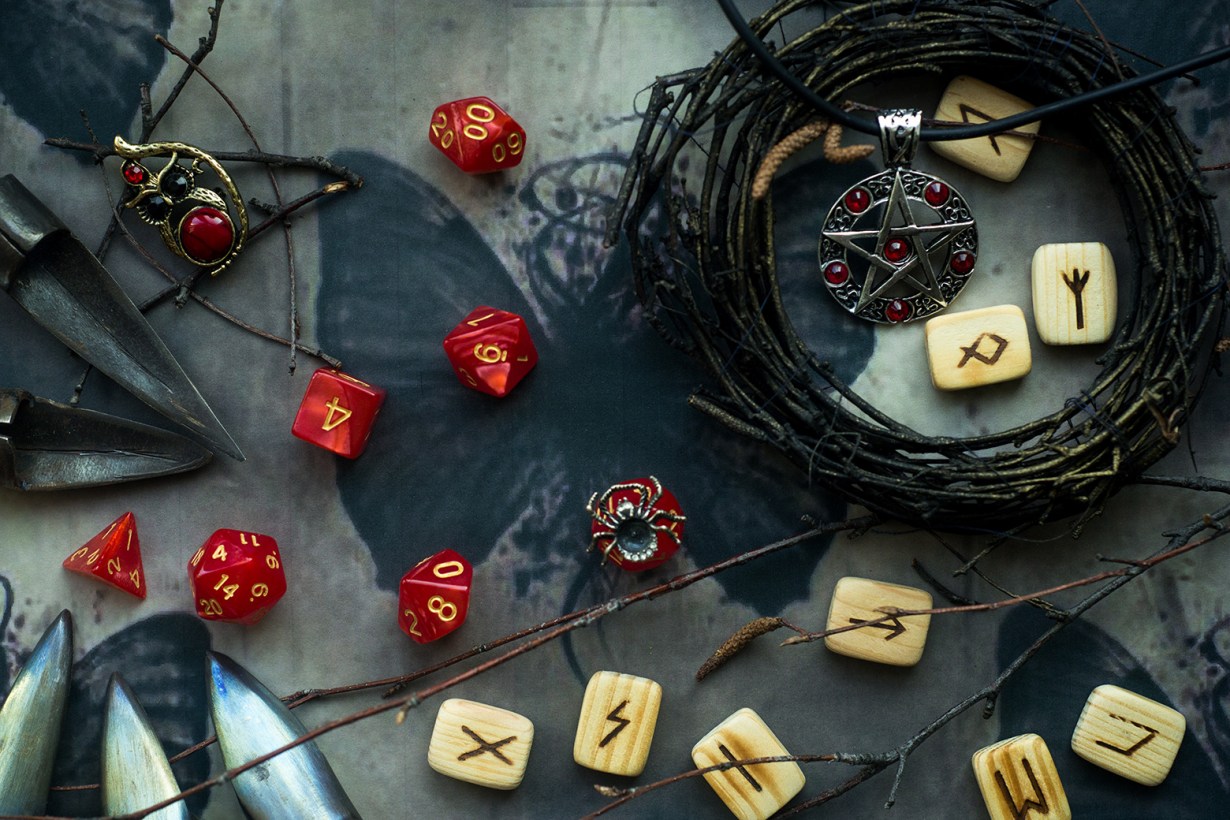 Dice sets rarely come with bags, though they might include a crystal plastic case. A small dice bag can be a worthwhile purchase.

Q. How can I tell if a die is balanced?

A. Other than rolling your die a hundred times or so and recording the results, you can perform the float test. Fill a glass with water and a lot of table salt, mixing the salt in well. Put the die in the water. After it floats to the surface with one face up, poke it to get the die rotating. If one face continually floats upward, your die could be imbalanced.

A. It’s possible, and the table could chip or scratch your dice as well. Glass surfaces are also susceptible to damage, and rolling glass or metal dice on them is quite noisy.

A. They do, though d6s are usually 14 or 16 millimeters tall when resting on one side, and the other dice are approximately the same. However, mini and extra-large sets do exist, though they’re often more of a novelty since they can be difficult to use. 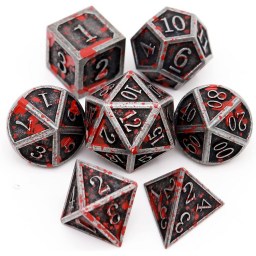 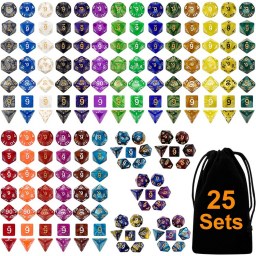 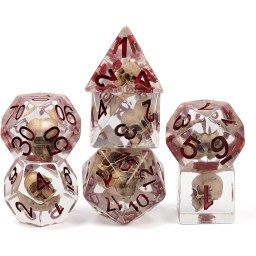 Top Pick
Udixi
DND Dice Set
Bottom Line
These dice come in 23 designs, all of which are clear and have little skulls and such inside.
Shop Now 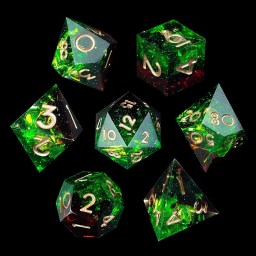 Top Pick
Atnpntr
DND Dice Set
Bottom Line
Each die in this set is sanded and polished by hand and closely inspected for quality before being shipped out.
Shop Now 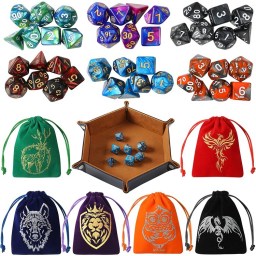 Top Pick
Grajar
DND Dice Set
Bottom Line
This set includes everything needed for up to six people to play Dungeons and Dragons together.
Shop Now