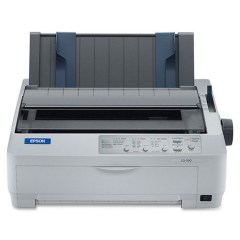 A reasonably priced model that is capable of printing 584 characters per second.

With an intuitive front control panel, multiple printing options, and a respectable print speed, this model is a workhorse that can consistently produce documents. Temperature control ensures that the unit doesn't overheat in certain environments.

The parts and cables are proprietary, so replacements will need to come directly from Epson. 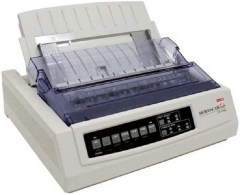 This best-selling model prints 435 characters per second, yet it has a lighter, more efficient motor.

Setup is not intuitive and can be a bit involved. Much noisier than more expensive options.

An energy-saving option that still has a max print speed of 584 characters per second.

User-friendly with the ability to print continuous documents and cut-sheet paper up to 7 pages thick. Works with new and old systems alike, including DOS. The included ribbon prints up to 8 million characters before needing to be replaced, meaning years of printing for constant users. 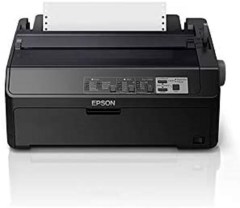 This model is network-ready and can integrate into any office the day it arrives.

Compatible with every version of Windows between XP and 10. Comes with a ribbon, expediting the setup process. Has front and rear tractor feed options, and it's even able to print off of DOS systems for those who work on older technology while embracing modernity.

Designed for high-volume work, and as such prints at a lower visual quality. 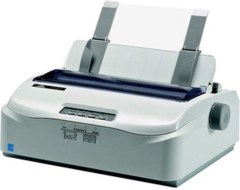 When a large, clunky model isn't necessary, this compact option is perfect for both personal and office use.

Smaller size works great when space is an issue; designed for small and medium-sized businesses. Prints labels, card stock, and envelopes as well as documents. Can print up to 400 characters per second. Control panel is easy to operate for beginners.

Graphics capabilities are very limited and only prints in black and white. Not compatible with Windows 10.

The first dot matrix printers were built into teletype machines (the forerunner of the fax) over a hundred years ago, so it would be reasonable to wonder what place that kind of old-fashioned technology could have in today’s office. In fact, there are still several things a good dot matrix printer does better than its laser and inkjet rivals, and they can put up with harsher working environments, too.

A dot matrix printer works much like a manual typewriter. A print head strikes an ink-filled ribbon, marking a sheet of paper. Because there’s a physical impact, several copies can be created at the same time — perfect for sending invoices, for example. These printers are invaluable in warehouse operations where lists are distributed to multiple departments. Small ones are used in hot working environments, typically restaurants, where other types of print can smudge or fade. 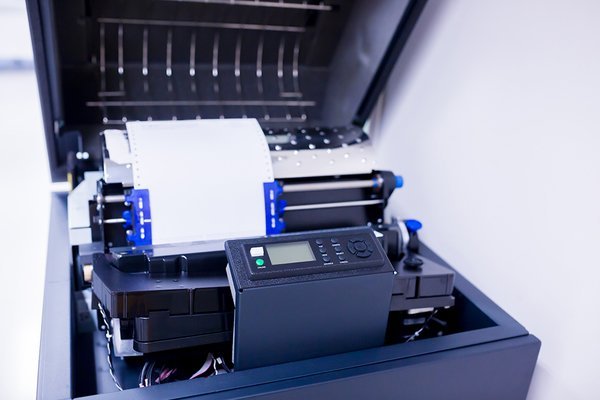 Dot matrix printers can be an efficient and cost-effective solution, but they’re quite function specific. Don’t expect to get high-resolution color images out of one.

The print head of a dot matrix printer is composed of a number of pins (or wires), in a vertical row. As the print head moves horizontally, it creates character shapes by pushing different combinations of pins forward into the ink ribbon and into contact with the paper.

Over their many years of development, print heads have had anywhere from 7 to 36 pins, though now there are just two choices: 9 pins or 24 pins, the latter in two slightly offset rows of 12.

Manufacturers often quote dots per inch (dpi), which can be confusing. Comparison with other types of printers doesn’t give a realistic view of print quality. A 9-pin printer might be capable of 240 x 216 dots per inch, for example. A similar 24-pin printer has a resolution of 360 x 180. There doesn’t seem to be a great deal of difference, but when you see the printed samples, there’s an obvious improvement in quality.

Speed can be an important factor in a busy business environment. Dot matrix printers are rated by characters per second (cps). This can be as low as 80 on entry-level machines and several thousand on large models. 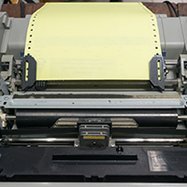 Did You Know?
Dot matrix devices have been around since the 1920s, and machines very much like those in use today were introduced over 70 years ago. Brother, OKI, and the defunct Centronics and DEC were early manufacturers.
Staff
BestReviews

Handling: This is an important issue. Listing paper (also called continuous printer paper) is a popular choice, but many printers also feed individual sheets just like any other printer. There will be a maximum thickness capacity, generally given as a number of sheets.

Listing paper: This is what’s usually used in dot matrix printers for invoices, stock lists, and so forth. It can be composed of several layers (frequently two or three but up to nine). It feeds continuously rather than as single sheets, but it usually has perforations so you can tear the paper into individual sheets after printing. Standard perforations are 12 per inch. Micro-perforations are 30 per inch. Listing paper is also available unperforated.

NCR: Listing paper may also be described as “no carbon required” (NCR). In the past, if you wanted to make duplicates on ordinary paper, it was necessary to insert a piece of carbon paper between each sheet. A laborious and messy process that often resulted in carbon-coated fingertips! NCR paper is treated so any marks made on the top sheet are automatically copied through. All that’s required is a little pressure.

Size: Paper sizes can vary. Don’t assume that all dot matrix printers use standard letter-size paper. It’s important to think about what you’ll be using the printer for. Sometimes data reports are left as a continuous concertina, perhaps dozens of pages long. Other times, when printing invoices, for example, you may want to file copies, so you won’t want oversize sheets.

Compatibility and connectivity are also key areas. Printer drivers for Windows are more common than those for Apple Mac. A few can print from your phone or tablet, but not many. Most are designed to be hardwired to your computer via parallel or serial ports. USB connections are fairly common, but ethernet are less so.

Color is restricted to the type of ribbon, and when they do exist, your choices are usually just black and red. These machines are designed to produce lots of data, and even 24-pin models are not great with images.

It would be unfair to describe modern dot matrix printers as noisy, but there’s no doubt they’re louder than inkjet or laser printers. It’s seldom a problem in office situations, but you wouldn’t want one close to your TV while you’re watching a movie! 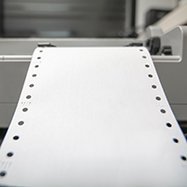 Did You Know?
Why is it called “listing” paper? Unfortunately, we couldn’t find a definitive answer. It might be simply because it’s often used for printing lists of products.
Staff
BestReviews

While there are plenty of dot matrix printers to choose from, there’s nothing like the variety you get with inkjet or laser printers, and price differences are largely in line with size and speed.

There are few models that cost less than $200, but most go from $300 to $600. While that might seem expensive when compared to a cheap inkjet, that type of printer just can’t do what you a dot matrix can. It’s also worth noting that dot matrix consumables cost as much as 90% less than those for other types of printers. There are also more expensive models, and high-capacity machines can top $2,000. 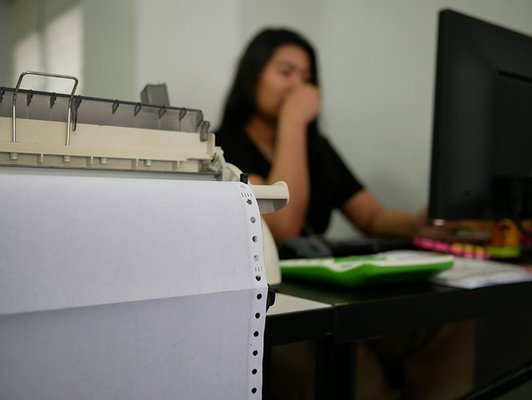 Inkjet printers seem to run out of ink suddenly — usually in the middle of an important job! Dot matrix ribbons start to fade slowly, so you get plenty of warning that you need a replacement.

Q. How long can I expect a dot matrix printer to last?

A. Most of these devices are very durable. How long they last will depend on usage, of course, but five to seven years is common.

Q. What’s the difference between a dot matrix printer and a thermal printer?

A. A dot matrix printer uses small pins to push ink from a ribbon onto ordinary paper. A thermal printer (also called a thermal transfer printer), uses a heated print head to transfer an image onto specially treated paper: it darkens where the heat is applied. There’s no ink (so they never run out), but the special paper isn’t cheap.

The advantage of thermal printers is that they can be very compact, and they’re quiet, which is why you often see them used in point-of-sale machines. The disadvantage is that they can’t handle multiple sheets. When you use your credit card, if the store clerk offers you a receipt straight away, they’re probably using a dot matrix printer. If they ask you if you’d like a copy and then have to print it separately, it’s almost certainly thermal. Thermal paper is also what’s most often used in fax machines. As you may have noticed, it’s prone to fading over time.

Q. Is it difficult to get supplies for dot matrix printers?

A. Not at all. Any online or local office supplier should be able to get whatever you need. When you’re getting spare ribbons, you can probably save money by trying third-party alternatives. Unlike with modern laser and inkjet printers, you’ll have no problem with these ribbons not being recognized because of some computer chip that forces you to use originals! 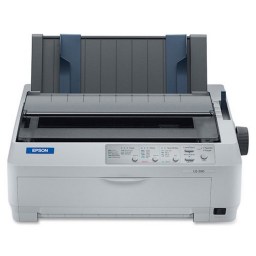 Best of the Best
Epson
LQ-590
Bottom Line
A reasonably priced model that is capable of printing 584 characters per second.
Shop Now 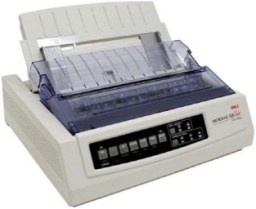 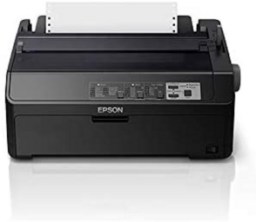 Top Pick
Epson
LQ-590II
Bottom Line
This model is network-ready and can integrate into any office the day it arrives.
Shop Now 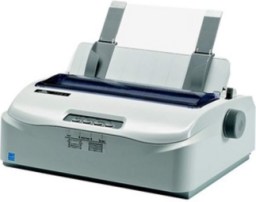