Quiet operation and a feature-loaded console, along with the comfort and ease of its recumbent setup, make this a winner of an exercise bike.

Heart-rate contact sensors are inaccurate unless gripped exactly right. Built-in speakers are tinny at best. Users shorter than 5’5” may find this bike uncomfortable. 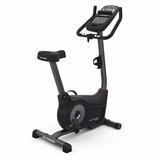 A good entry-level bike with an impressive number of workout options for the price.

Built for convenience, with statistics tracking that transfers using USB. Pedal while relaxing using media shelf for entertainment. Takes under 2 hours to assemble. Quiet and takes up relatively little space.

Some reports of a clicking noise when you pedal. Display is not backlit. The seat may be hard for some; consider buying a pad. 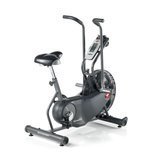 A reliable wind-resistance exercise bike that assembles sturdy and stays that way.

Fairly easy to set up, despite its weight. Wind guard and book stand are available separately. Comfortable seat and pedals. Easy to assemble, and not too large for the family room.

Seat is difficult to adjust and tighten, and tends to slant forward. LCD console has limited functions and can be hard to read. Belt can snap after a few months of use, and it’s prone to developing rattles and squeaks. Shorter users will have trouble reaching the handle bars.

An ideal choice if you’re looking for a WiFi-enabled upright model that lets you track your progress.

Easy to move to a new spot, thanks to front-side roller wheels, and both seat and handlebars can be adjusted. Console can be personalized and some custom programming can be done. Compatible with the Schwinn Trainer and other fitness apps, to help track your progress.

Programming interface has a steep learning curve. Seat can be uncomfortable. Unit may shift around on smooth floors, so consider purchasing a mat. Not very quiet, and inertia wheel isn’t as smooth as pricier models.

A gym-tough exercise bike that will hold up to intense training sessions, but its console could use a few upgrades at this hefty price point.

Console requires D batteries, a mild inconvenience. Display isn’t backlit, and LCD can be difficult to read. No air diverter (though some users are fine with the pedal-generated air conditioning). Instruction manual doesn’t help with programming console. Very heavy.

If you want to burn calories and fat, biking is a great cardio workout. If you want to establish a consistent exercise routine, investing in an exercise bike is your best bet because you can ride any time you wish — no excuses for inclement weather. Schwinn is one of the most respected bicycle manufacturers in the game, and it’s not surprising that the manufacturer offers a line of high-quality exercise bikes that can help you get fit. 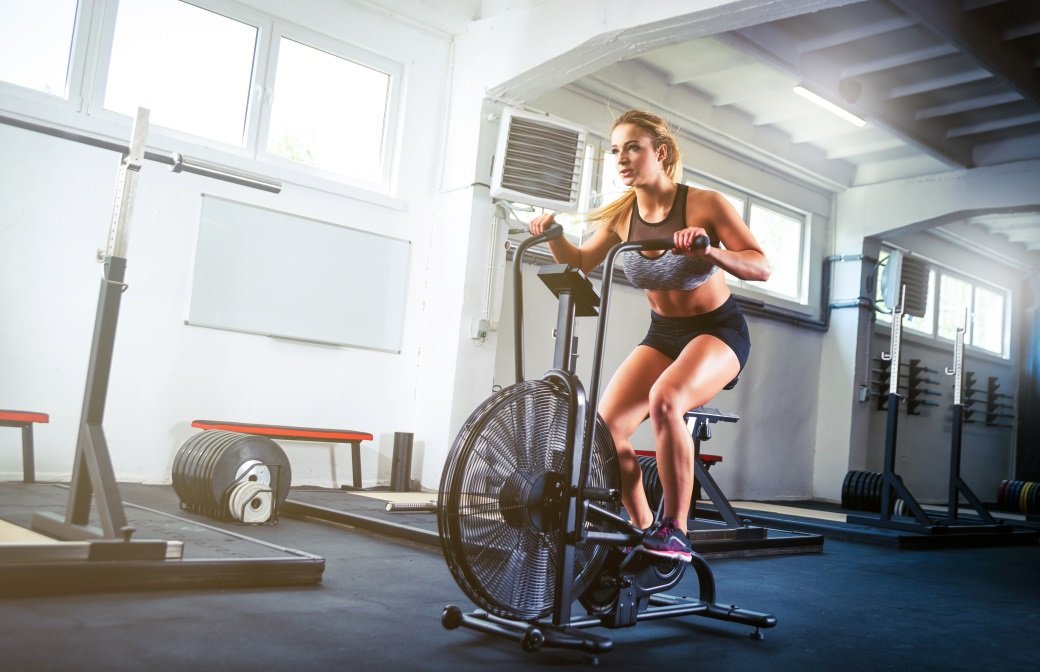 Using an exercise bike regularly can strengthen your heart and lungs and help lower your blood pressure.

While any type of Schwinn exercise bike can give you a great workout, you may prefer one style over another. Here’s a look at what’s available.

Recumbent bikes don’t have the same setup as outdoor road bikes. Instead, there is a seat with a backrest that’s set slightly back from the pedals and feels much like a chair. A Schwinn recumbent exercise bike is an apt choice if you’re looking for something comfortable that won’t put as much strain on your back and neck. These bikes tend to be quite large, however, so you’ll want to make sure you have enough space before buying.

Like an upright bike, the Schwinn indoor cycling exercise bike closely resembles an on-road bike. However, instead of a motor and electromagnetic resistance, this type of bike uses a flywheel system to provide resistance. As a result, the workout is similar to being on the actual road. Notably, indoor cycling exercise bikes aren’t known for comfort and can cause back and neck strain.

This type of Schwinn exercise bike uses a fan to create air resistance. As you pedal faster, the bike increases resistance. This setup can be difficult for beginners and is best left for experienced bike riders. 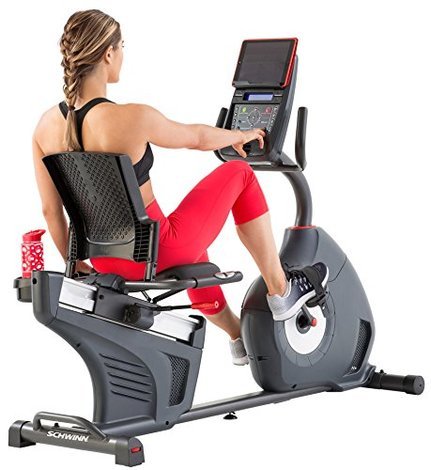 If you’ve sworn off exercise bikes because of their hard, uncomfortable seats, the Schwinn 270 Recumbent Bike is the model for you. The ventilated, contoured seat has lumbar support in the backrest to keep you cool and comfortable all workout long. It offers 25 levels of resistance and 29 onboard workout programs to remove the guesswork from effective exercising. We love the easy-to-read backlit LCD displays, too.

Nearly all Schwinn exercise bikes require some type of power. Some bikes have a motor that provides resistance. Schwinn models with a motor usually feature an AC adapter and must be plugged into a wall outlet. The fact that you’re tethered to the wall limits your placement choices somewhat.

Other Schwinn exercise bikes only need power for the electronic display. Replaceable batteries may power this type of bike. Because there is no power cord, you can station this type of exercise bike wherever you wish in the home. However, some battery-powered bikes can also be used with an AC adapter. You may prefer this to ensure that your data display doesn’t lose power in the middle of a workout.

An exercise bike can be uncomfortable to ride if the seat is too hard. Fortunately, Schwinn offers several models with padded seats to make the ride more comfortable. Some bikes come with an extra-large seat to enhance your comfort even further.

If you’re particularly concerned about seat discomfort, you might prefer a Schwinn recumbent exercise bike. These seats are similar to chairs and provide back support.

To customize your workout, an exercise bike should offer multiple resistance levels that are easy to adjust. That way, you can start at a lower resistance level and work your way up to a higher level as you become more fit. Schwinn upright and recumbent exercise bikes offer 20 or 25 levels of resistance. The levels are controlled by computer, so you have only to press a button on the display to set your level.

All Schwinn bikes have at least a basic LCD screen to display your exercise data while you’re riding. Some high-end Schwinn models have multiple backlit LCD screens.

An exercise bike doesn’t just provide an effective cardio workout. It can also help build up the muscles in your legs, thighs, and glutes.

Several Schwinn exercise bike models include pre-programmed workout routines that make it easy to complete the ideal workout based on your fitness level, goals, age, weight, and gender. Some models offer 22 workout programs; others have up to 29 options. Depending on which bike you buy, the programs may incorporate your user profile data and target heart rate. There may be a quick-start option, a fitness test option, and customizable options that you create yourself.

To get the most from your workout, it helps to know if you’re in your target heart rate zone. Some Schwinn exercise bikes have a built-in heart rate monitor for this purpose. These monitors are based on grip contact; you must hold a certain part of the handlebars or console to get a reading. Others feature a telemetry-enabled display; you wear a compatible chest strap monitor, and the display shows your readings as you pedal.

Are you interested in tracking your long-term performance on your exercise bike? Schwinn offers several exercise bikes that are compatible with the Schwinn training app, as well as third-party fitness apps. The bike transmits your workout data via Bluetooth so you can track your progress via your smartphone or tablet.

All Schwinn exercise bikes feature a water bottle holder, so you never have to worry about getting dehydrated during a workout. Some models also have a media shelf or tablet holder, so you can place your phone or tablet on the console and stream your favorite TV show or movies while you exercise.

Some Schwinn exercise bikes feature built-in speakers and an MP3 input to allow you to play your favorite workout playlists from your smartphone or tablet through the in-console sound system.

Some Schwinn exercise bikes have a built-in USB charging port so you can charge your phone, tablet, or another device while you work out.

Schwinn exercise bikes vary in price based on bike type and features offered. Most models cost between $299 and $999.

Schwinn air-resistance exercise bikes tend to be the priciest Schwinn models. These bikes start at $399 and can cost as much as $999. Less maintenance is required, however, which can make the higher price tag worthwhile. 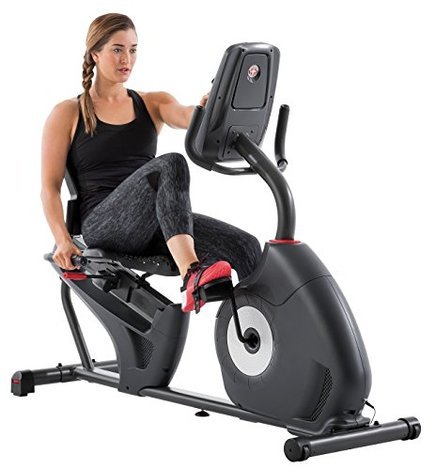 The Schwinn 230 Recumbent Bike offers many of the same features as high-end recumbent bikes at a fraction of the cost. Its comfortable rail slider seat adjusts with the pull of a lever. You can listen to your favorite playlists on its built-in speakers, and you can burn calories quickly and efficiently with the help of 22 preset exercise programs.

Most Schwinn exercise bikes allow you to see the distance you’ve ridden in either miles or kilometers.

The bikes on our shortlist are fantastic, but we also love the Schwinn IC3 Indoor Cycling Bike. It’s great for avid on-road bikers who want to train during the winter. The 40-pound flywheel offers a smooth, silent ride, and you enjoy infinite resistance levels based on how fast you pedal. 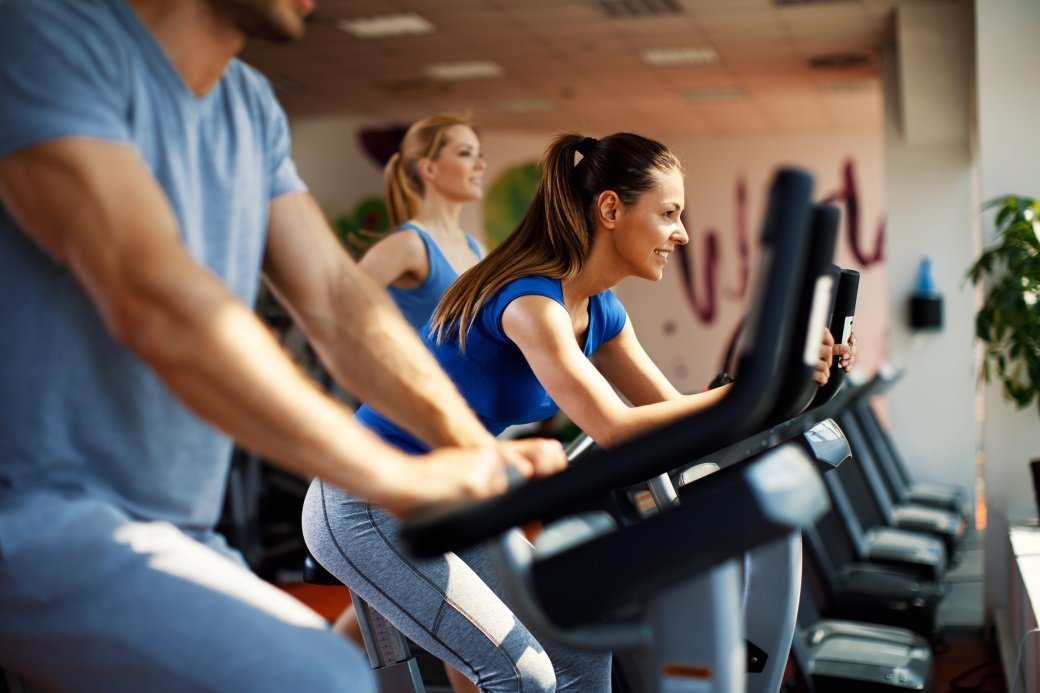 Riding an exercise bike burns calories and provides an excellent cardio workout. It’s also low-impact, which makes it worth considering if you have knee or joint issues.

Q. What type of maintenance do Schwinn exercise bikes require?
A. It depends on the type and model that you have. Consult the owner’s manual that comes with your bike to determine the proper maintenance procedure and schedule. In general, make sure that the bike is clean after every use. Wipe down the frame and display with a damp cloth after each workout to remove sweat, dirt, or debris that might damage the bike. If the console runs on batteries, you’ll need to replace them whenever they run out.

Quiet operation and a feature-loaded console, along with the comfort and ease of its recumbent setup, make this a winner of an exercise bike. 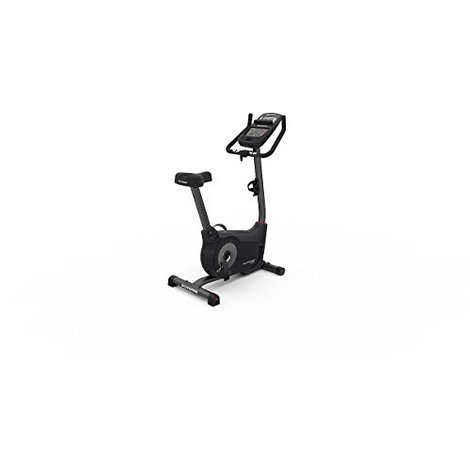 A good entry-level bike with an impressive number of workout options for the price. 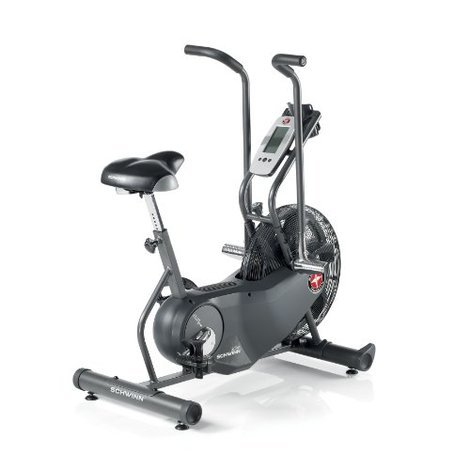 A reliable wind-resistance exercise bike that assembles sturdy and stays that way. 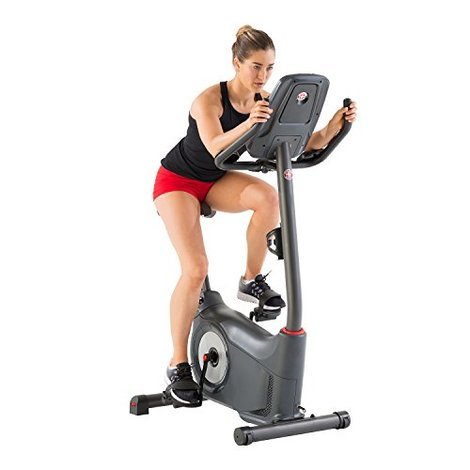 An ideal choice if you’re looking for a WiFi-enabled upright model that lets you track your progress. 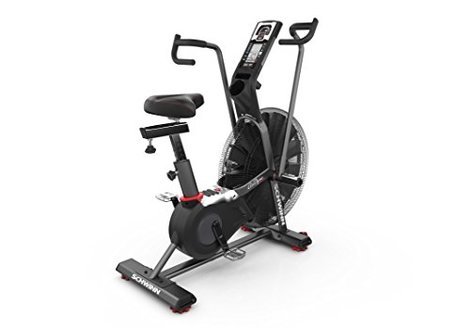 A gym-tough exercise bike that will hold up to intense training sessions, but its console could use a few upgrades at this hefty price point.