The polyester fabric and polyeurethane accessories are comfortable to wear despite the look. Faux-suede and leather give it an authentic look. Includes boot covers, a head tie, a tricorne hat, and patch. Great for anyone looking for the classic pirate look.

Some complain about the fabric quality.

A sexy take on the classic pirate look includes a corset-style top, a ruffled skirt, and several accessories.

Costume is made from 100% polyester, cotton, and polyurethane faux leather for an authentic look. ruffled skirt is short in the front and long in the back. Includes a sword, bracelet, and shoes. Several buyers lauded the costume's comfort.

Some say it runs small and is made from cheap material.

This maiden costume shines the spotlight on the unsung heroes of the pirate genre.

Costume includes a headscarf, dress, and vest, Available up to size 14. Made from hand-washable fabric. Many buyers laud the costume's flattering design. Dress, corset, and blouse are all a single piece that's easy to keep track of.

The shirt fabric is too thin.

This costume comes equipped with plenty of cuffs, bands, and swashbuckling accessories.

This one runs large. 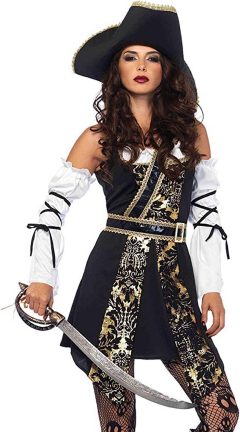 A sexy buccaneer costume that draws from the traditional look and adds a unique black-and-gold flare.

Show off your riches with the gold-colored trim. The puffed sleeves look great next to the dark-colored dress. The costume features a beautiful belt with a buckle and a hat. Available in plus-sizes. Several buyers love the comfort.

Hat is quite big. 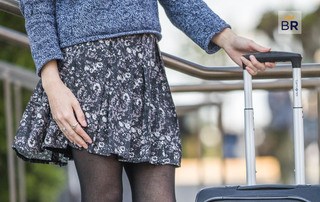 The swashbuckling, rambunctious persona of pirates has captured the public’s imagination for centuries, so it’s no surprise that pirate costumes are a great choice for any Halloween or other costume party. These costumes are fun and easy to customize, and various elements of it can be reused in future costumes. With the right care, a good pirate costume can last you for years.

Before you go wild adding one to your cart, there are a few factors to keep in mind. Is this a costume for a woman or a man? Each one has different elements. You should also think about extras such as makeup, the fabrics the costume is made of, and props.

Regardless of what you’re looking for, learn more about your options so you can arrive at your next costume party in style. A good buying guide and recommendations can get your shopping started. 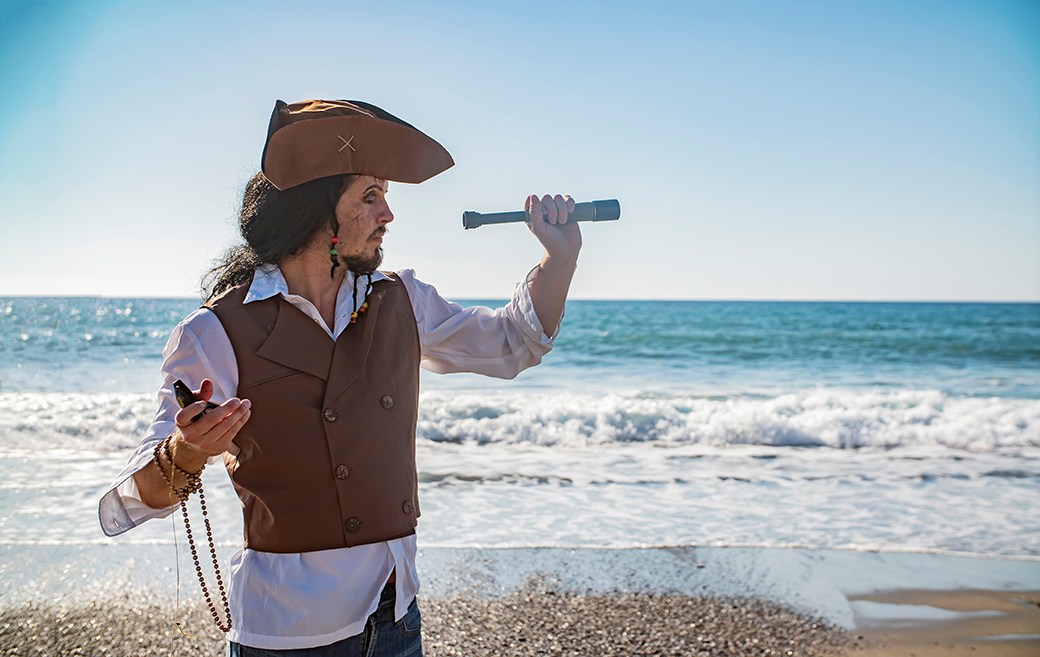 Most pirate costumes are loosely inspired by the Golden Age of Piracy, but costume renditions fit much more tightly than actual pirate garb from that era.

How to buy the best pirate costume

A brief history of pirate costumes

People have been fascinated by pirates since what’s known as the Golden Age of Piracy, which extended roughly from 1650 to 1730, a period rife with exploration, colonialism, the slave trade, and the trading of goods, including gold and other treasure, around the world. During that time, pirates were robbing ships in waters throughout the Caribbean, Indian Ocean, West Africa, and elsewhere.

Pirates have always been known for having an eccentric style. They favored billowy fabrics — flaunting the fine threads they stole from the ships they robbed — jewelry, and belts that supported their midsection as they labored on board the ship. With the rise of pop culture Halloween costumes in the mid-twentieth century, pirates became an increasingly popular option.

Admittedly, female pirates were rare during the Golden Age, but that doesn’t mean women have to miss out on the fun! In truth, the clothing female pirates wore wasn’t that different from men’s.

Anyone can wear a man’s pirate costume, but for those looking for a female-specific costume, you’ll come across many with knee- or midi-length layered skirts and dresses. Red, black, and brown are common colors, both solid and striped.

There are some costume options with pants too, usually tight-fitting and similar to leggings. Tops are often off-white and flowing and typically styled with a fitted black or brown corset.

While pirate costumes don’t necessarily include shoes, black boots with short heels are your best bet.

Since most pirates were men, many of the costumes you’ll find are for men explicitly or inspired by men’s pirate wear.

These costumes consist of a top and pants and sometimes a vest or jacket. As with women’s costumes, red, black, and brown are the most common colors. Most of the accompanying blouses are billowy and in shades of off-white or cream.

The pants are usually black or brown, sometimes incorporating stripes of other colors. You’ll come across a lot of breeches too, which pair well with knee-high boots.

While not all men’s pirate costumes include a jacket, the ones that do are often embellished with gold accents. Though less common, you can also find men’s costumes that include a belted vest.

There are many pirate characters in pop culture, so it’s no surprise that quite a few costumes are inspired by them.

Captain Hook is probably the most recognized pop culture pirate, best known for his silver hook (the result of one of his hands being cut off by Peter Pan and then eaten by a crocodile). A Captain Hook costume has a deep red or burgundy coat, tricorn hat, and, of course, a hook accessory.

In more modern times, there is Captain Jack Sparrow from the Pirates of the Caribbean movies. This fearless film captain is known for his dreadlocks, leather cross-body sash holding his sword, headscarf, and pants tucked into black or brown knee-high boots.

Unlike these captains, Blackbeard is both a historical figure and a pop culture mainstay. Since the only depictions of Edward Teach were fictionalized illustrations, Blackbeard costumes vary but are predominantly black, and many include cavalier boots with turned-down cuffs. The most recognizable element is a bushy black beard.

In general, most pirate costumes are made of polyester, spandex, cotton, and/or a blend of two or more of these materials.

Polyester is cheap to produce, making it a common fabric for costumes in general. It’s also durable, wrinkle-resistant, and easy to care for. Many pirate costumes incorporate a blend of cotton and polyester.

Cotton is organic, hypoallergenic, breathable, and easy to wash. Of the three materials, cotton is the most expensive. But it also blends well with cheaper fabrics, so your best bet is to find a costume made with cotton-blend fabrics if you’re looking to save some money.

Like many costumes marketed to women, you’ll find women’s pirate costumes that are marketed as “sexy.” Depending on the event, you might want to go that route, but there are plenty of options with more coverage and more historical accuracy.

Features to look for in pirate costumes

Eye patch: Few accessories are more closely associated with pirates than the eye patch. Contrary to what some believe, eye patches weren’t worn solely to cover up a missing eye. Pirates wore them in order to train their eyes to fight in the dark.

Headgear: A hat or bandana is essential to complete the pirate look. Tricorn hats are popular, sometimes with a skull and crossbones on the front.

Belt or sash: This is a must, especially if you want to include a sword with your costume.

The jury’s out on whether or not pirates actually wore makeup, but a couple of accessories can amp up your look a few notches. Dark smudges of kohl under the eyes complete a Captain Jack Sparrow look, and some surmise that the smudges, much like those worn by football players today, may have cut glare out on the open ocean.

Pirates likely had a deep tan from long days of sun exposure. If you aren’t naturally tan, you might consider some well-placed bronzer to achieve that sun-baked effect. 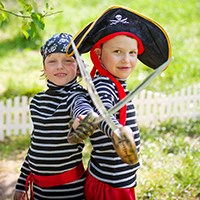 Did You Know?
Pirates wore a bandana to protect their heads from the sun and keep sweat out of their eyes.
Staff
BestReviews

How much do pirate costumes cost?

As is the case with most costumes, you get what you pay for with a pirate costume. On the budget-friendly end, expect to spend $15 to $30. Most of these costumes are primarily made of polyester. You’ll find costumes with minimal elements, such as a one-piece dress for a women’s costume. Accessories will be few at this price.

The $30 to $55 range opens your options to cotton fabrics and pirate costumes with a wealth of accessories. Many of these incorporate design elements like layered skirts, corsets, and embroidered jackets.

If you have a bit more to invest in a costume, for $55 and up you’ll find pirate costumes with jackets, fake beards, hats, and other accessories. These costumes include higher-quality materials, either 100% cotton fabrics or blends that are predominantly cotton.

Some pirate costumes include the black Jolly Roger flag, whether on the tricorn hat or a skirt. The Jolly Roger comes from the French “joli rouge,” or “pretty red,” since the original flags were red, not black. 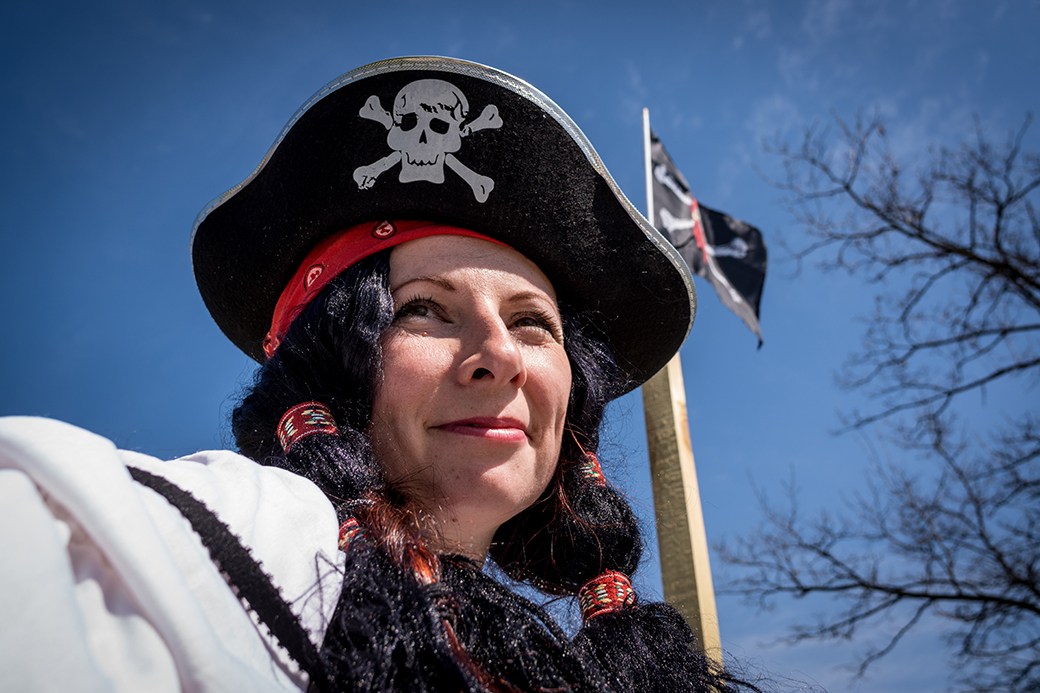 If you want to save some money, avoid pirate costumes that come with a full suite of accessories and see what you can scavenge or make yourself.

Q. Why are pirates associated with Halloween?

A. People associate pirates with Halloween because they’re popular choices for costumes. The costumes are suitable for all ages and genders and easy to customize or even throw together at the last minute with items you probably already own.

Q. How do I dress my child like a pirate?

A. A kid’s pirate costume isn’t too different from an adult’s. Mainstays like a black or brown sash, billowy pants or top, a bandana, and an eye patch will be enough to capture the pirate spirit.

A. Most pirate costumes aren’t offensive. An offensive costume is one that parodies or stereotypes an ethnic or cultural group. But pirates as a whole are 1) from many different geographic locations, and 2) a product of the modern pop culture imagination.