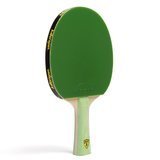 Body includes five layers of wood, guaranteeing the paddle will serve you well for years to come. Rubber handle makes it simple to control the paddle. Equipped with PVC tape to protect sides of paddle. Available in several attractive colors.

Paddle head is sometimes unstable and wobbly. Less durable than many comparable paddles. 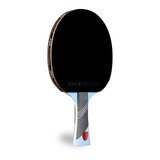 A lightweight recreational ping-pong paddle that won't break your budget.

Consists of pips-in rubber on both sides for a good offense. Five-ply blade is flexible and lightweight. Handle is flared to provide a good grip.

It's a beginner racket that will degrade over time.

Premium ping-pong paddle that delivers a great combination of power and speed.

Grip may wear down with extended use. 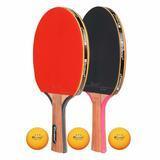 Deluxe ping-pong paddle that will help you play like a pro.

Performance-level paddle designed to help you maximize speed and ball control. Comfortable grip can help you put extra spin on the ball at any time. First-rate wood construction. More affordable than many similar paddles.

Handle is cheap and flimsy. Heavier than many other paddles. 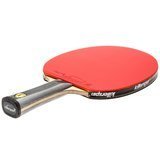 The Diamond TC blade sets this one apart from others. It's known for its speed and power.

Tournament-quality racket that is ITTF approved. Responsive with pips-in rubber. Expensive, but you're paying for high quality.

This pricey paddle may be overkill for the casual or amateur player.

Any ping-pong player knows that the game’s most important tool is the paddle. Ping-pong paddles come in a wide variety of styles to suit different types of players.

The paddle’s blade determines the power. The rubber determines the amount of spin the paddle can apply. The softness of the sponge depends on your playing style, whether aggressive or defensive.

There’s a lot to consider to find the right ping-pong paddle to up your game. Our guide has the information you need to make an informed decision so you can dominate the competition. 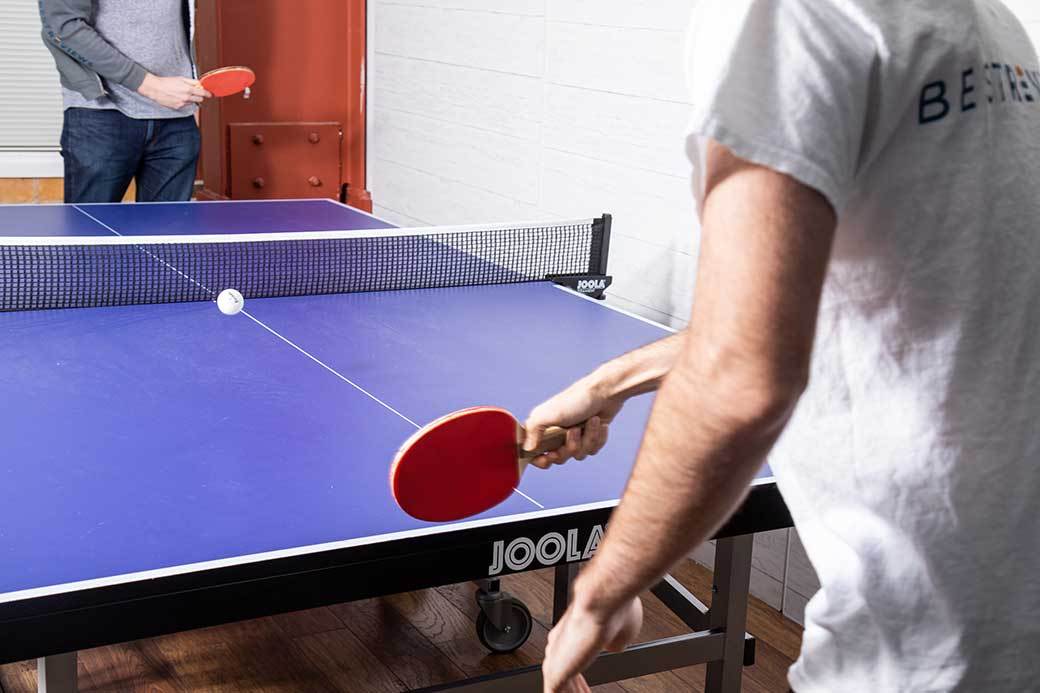 Using the same ping-pong paddle for a long period of time can improve your control and power.

Ping-pong, or table tennis, has been a popular sport since the early 20th century and is played both casually and competitively. There are a variety of playing styles and grips, which determine the type of paddle you need.

USA Table Tennis has very loose requirements for paddles, which are also called rackets. As long as the paddle is of even thickness, the blade and handle can be any shape or size. Despite this lack of specificity, most blades and handles are a similar shape and size, balancing surface area with weight so players can move and react quickly.

Do you use penhold or shakehand grip? Are you a defensive or offensive player? How important are power and spin to your playing style? You should answer these questions before you purchase a ping-pong paddle.

The blade, which must be at least 85% natural wood, is made of several layers, usually three, five, or seven. The overall thickness of the blade typically ranges from 5 to 10 mm, and the weight generally ranges from 2.5 to 3 ounces.

A ping-pong paddle’s handle should accommodate your preferred grip. Shakehand grip or Western handles are longer and rounded, allowing for the popular shakehand grip or the Seemiller grip. Penhold grip handles are shorter and thicker, allowing you to comfortably hold the paddle in the Eastern style.

Handles may also be straight, flared, or ergonomic. This has more to do with comfort than playing style.

The rubber is the part of the paddle that makes contact with the ping-pong ball. While some paddles have no rubber, this is fairly uncommon in competitive play. The rubber should complement your playing style. Rubbers are measured by their tackiness and firmness. Some rubbers are pips out, with rubber stippling covering the surface, while most are pips in (also called inverted or reverse), resulting in a smooth and even surface.

Tackiness determines how easily spin can be applied to the ball. Defensive players prefer highly tacky rubbers, while offensive players may want a less tacky surface. Grip determines how much control you have, allowing for the pinpointing of aggressive shots. Many players prefer a balance of tackiness and grip, which lends both their defensive and offensive games strength.

The sponge is the soft layer of foam between the blade and the rubber. Sponges vary in thickness, softness, and springiness.

Thin sponges are usually around 1 mm thick and are best suited to defensive play. Sponges around 1.5 mm thick tend to be a good choice for players with an all-around style of play. Thick sponges of 2 to 2.5 mm thickness are springy, adding power and control.

Ping-pong paddles with pips-out rubber, particularly those with longer pips, may have no sponge. 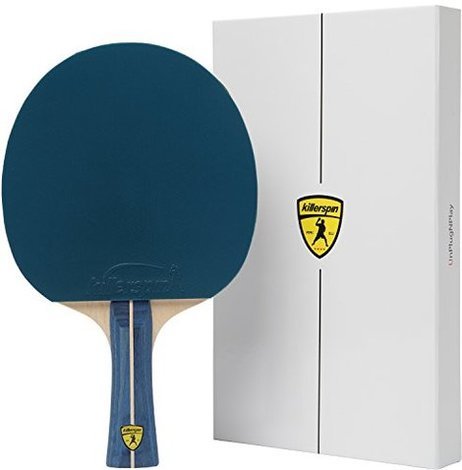 An all-around paddle for novice to experienced players

The Killerspin JET200 Table Tennis Paddle has a five-layer blade and rubber handle for excellent control. The flexibility of this ping-pong paddle makes it a great option for beginners looking to learn and improve.

Caring for your ping-pong paddle

Unfortunately, rubber does degrade over time and can lose its springiness and grip. A paddle left out can collect dust and dirt, shortening its lifespan.

Leaving your paddle on your ping-pong table is a great way to collect dust, which will lead to an uneven surface lacking grip. Ping-pong paddle bags and cases keep your paddle protected from dust and dirt and can prevent bumps and scratches. These bags can also hold ping-pong balls and your cleaning tools.

Rubber can also oxidize, but this can be prevented by covering the rubber with a plastic sheet designed for protecting paddles. You can also use kitchen plastic wrap.

The safest and most reliable way to clean your ping-pong paddle is with water and a sponge. There are special sponges made specifically for the job, but most sponges will work fine. Some players find that regular sponges can leave behind some small particles, however.

Rubber cleaners are available, but when using a cleaning product, you should always check that it does not contain any chemicals that may damage rubber. Different table tennis organizations may also have restrictions on what cleaners, if any, can be used on paddles.

You should also wipe down your handle after playing to reduce grease and dirt buildup.

Protecting the edge of your ping-pong paddle is as important as protecting the rubber since a serious drop or bump can split the wood of the blade. Side tape can be purchased to prevent dents and splits.

Entry-level ping-pong paddles from $15 to $20 are often made from less expensive woods like balsa and have basic rubbers for an all-around style of play. Paddles in this range may work well for beginners, but more experienced players may feel limited by their capabilities. Paddles in this range often have three to five layers of wood.

Paddles from $20 to $40 are likely to be specialized for certain playing styles and have five to seven layers of wood. Rubber surfaces may be extra tacky or grippy. Competitive players can often find paddles in this range.

For $40 to $80, you can get a professional paddle designed for competitive play. These paddles usually have seven layers of wood and may have layers of carbon fiber. They may also come with a carrying bag or other accessories.

Rubber does age, so purchasing a used ping-pong paddle is usually not a good idea.

After your paddle, the next most important piece of ping-pong equipment is your footwear. Your shoes should be grippy and allow for side-to-side movement.

Many of our top recommendations are all-around ping-pong paddles that work for beginners or intermediate players, but there are many paddles available that are tailored to specific playing styles that may better suit advanced players. The Idoraz Table Tennis Paddle Professional is a moderately tacky paddle that provides excellent spin and speed. We love this paddle for its defensive reliability. For a more aggressive paddle, the STIGA Pro Carbon Performance-Level Table Tennis Racket uses a layer of carbon fiber to add power to the springy and thick 2-mm sponge. Customers love the speed, control, and extreme amount of spin on this ping-pong paddle. 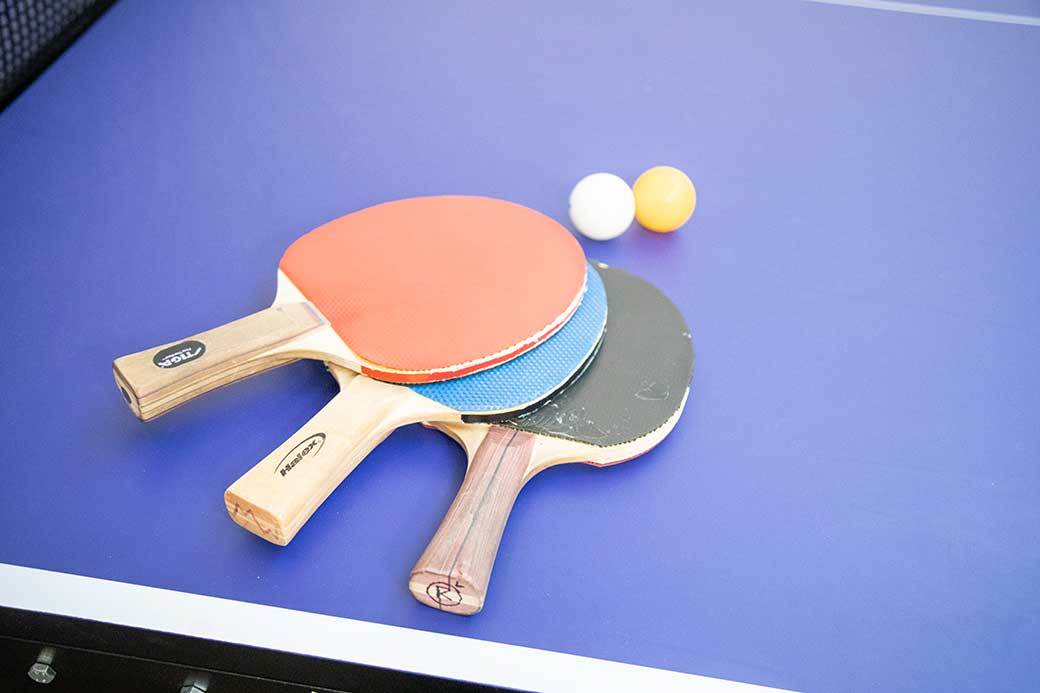 Having multiple ping-pong paddles allows you to switch playing styles between matches or even mid-match.

Q. Can the two sides of rubber on a ping-pong paddle be made of different materials?
A. While most table tennis organizations allow this, they also stipulate that one side must be red and the other black so your opponent can easily tell when you have switched sides. Beginners may find paddles with two different rubbers difficult to learn with.

Q. How much do speed, spin, and control ratings matter?
A. Because testing methods vary from one brand to the next, it’s difficult to compare ping-pong paddle ratings with much accuracy. You can use ratings to compare paddles by the same brand, but otherwise your best bet is to look at the materials used and read customer reviews.

Premium ping-pong paddle that delivers a great combination of power and speed. 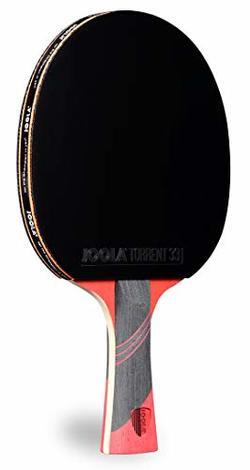 A lightweight recreational ping-pong paddle that won't break your budget. 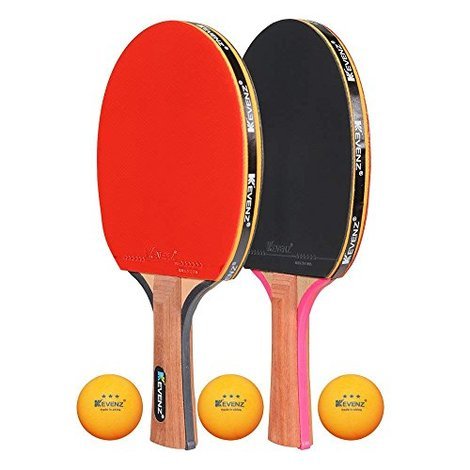 Deluxe ping-pong paddle that will help you play like a pro. 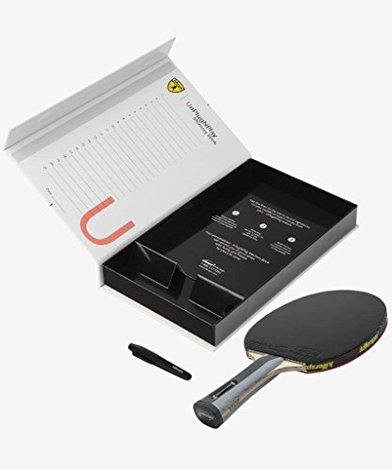 The Diamond TC blade sets this one apart from others. It's known for its speed and power.