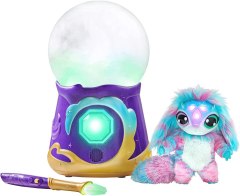 An interactive character reveal that lets kids use a magic wand to make a cuddly pet appear and that our testers found more fun than older versions.

Comes with a crystal ball on a stand that doubles as a nightlight. A removable stuffed animal appears through mist inside the crystal ball. Spells, games, lights, and sounds work with the included wand. Has a reset function to redo the reveal.

On the expensive end of the price range. 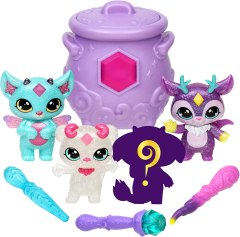 A mini cauldron and characters with wands that uncover surprise character actions.

Comes with a small cauldron and lid containing a surprise character. Includes Harlie the Flier, Gexi the Spellster, and Mava the Vanisher Mixlings with individual wands. Wand makes characters react and reveals the rarity of the secret character.

Some characters’ actions may not work. 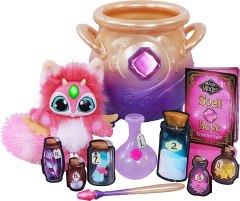 Kids can follow along with spell instructions and use their wand to reveal a soft pet in the misting cauldron.

Comes with spells, potions, and a magic wand that make the cauldron emit real mist and present a fluffy stuffed Magic Mixie. Mixie and cauldron light up and make 50 different sounds. Recommended for ages 5 and older.

Reveal may not work as advertised. 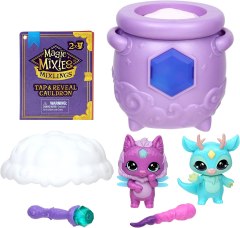 A small set of Magic Mixies with a cauldron that shows the characters’ surprise reactions.

Comes with a cauldron, magic wands, and 2 Mixlings whose identities are unknown before opening the cauldron. Wands make characters react in unique ways such as glowing and moving. Character reveal can be done more than once.

Much smaller than some other sets. 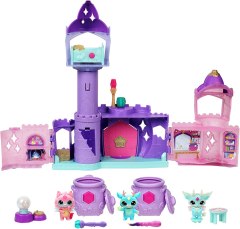 A castle for 3 Mixlings to interact that comes with 2 surprise characters inside of cauldrons.

Colorful plastic castle scene that folds open and has an extending tower. Included wands reveal 2 Mixlings from cauldrons and their special actions. Comes with a crystal ball that spins. Wands make certain castle parts move. For ages 5 and older.

May take time for young kids to figure out how it works.

Magic Mixies are some of the most exciting toys to hit the market in recent years. When your young magician mixes liquids and crystals in a special cauldron and taps a magic wand, a small plush animal (Mixie) emerges from the fog. Each Mixie has magical powers, so your child can enjoy hours of playtime after its exciting unveiling.

Before you add Magic Mixies to your shopping cart, you’ll want to consider a few factors. If this is a gift for a child (it’s understandable if adults want in on the fun too!), think about their age and the amount of supervision they need. Consider their interests too. Magic Mixies come with lots of accessories and dozens of sounds, lights, and colors to appeal to magic lovers of all ages.

Magic Mixies make a great gift for the young, aspiring magician and magic lover in your life. A good shopping guide and curated recommendations can help ensure that your choice is an informed one. 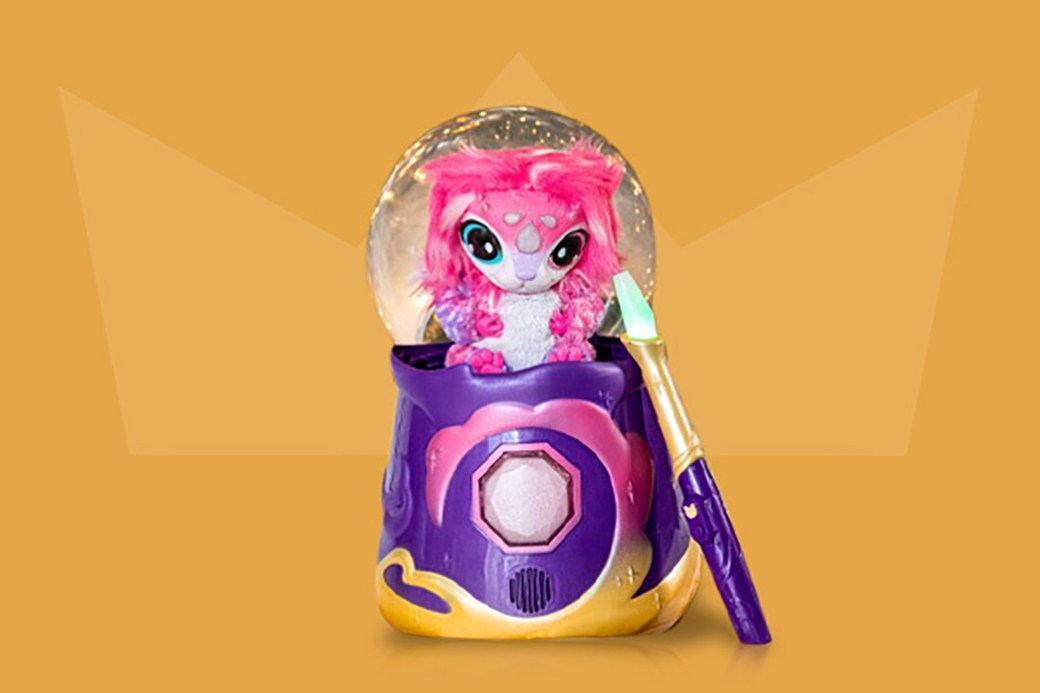 Toys are for all ages! You might be surprised by the number of social media influencers who have recorded videos of unboxing Magic Mixies.

How to buy the best Magic Mixies

What are Magic Mixies?

Magic Mixies are adorable, big-eyed furry toys with magical powers. After your child casts a spell and taps the included magic wand, the Mixie is revealed inside the fog-filled cauldron.

Along with the Magic Mixie, cauldron, and magic wand, Magic Mixies include a book of spells, a paper scroll, fizzy powder, dissolvable soap, and vegetable glycerin to make the fog. There’s also an instruction manual, a USB cable for charging the cauldron, and lithium batteries.

How does it work?

The cauldrons come in two colors: pink and blue. The Magic Mixie inside each one corresponds to the cauldron color. After unpacking the cauldron and confirming that it’s in Create mode, fill the included potion bottle with water. Adding the water to the cauldron makes a bubbling noise. A tap tap tap noise and green light prompt your child to tap the cauldron with the wand three times. Sounds help guide your child when to add “potions,” the crystal, and other items and tap the cauldron.

The final step is to add the scroll with the Mixie’s name on it. After your child drops in the name of their choice, they tap the cauldron and say the magic words. The Fizz Flower in the cauldron is what appears to give each Mixie its color.The Mixie appears inside the cauldron in a cloud of mist. Your child can play with it by nurturing its magic so it can grant wishes and help them cast spells.

You can find many videos online that detail using Magic Mixies, from opening the packaging to casting spells.

Spell mode: Magic Mixies can cast spells over and over again. The more spells they cast, the more powerful they become.

Wish mode: Mixies grant wishes. By tapping the Mixie’s gem twice with the wand, your child can make a wish and see if it comes true. If the Mixie’s gem flashes green, it means the wish is granted.

Enchanting mode: This means that the Mixie is ready to help your child cast spells. By setting the Mixie on the rim of the cauldron, entwining its tail around one of the cauldron’s handles, and holding the tip of the wand to its gem, your child sees flashes of different colors.

You should hear a bubbling noise when you add water to the cauldron. If you don’t, that means it needs to be charged.

The Magic Mixies Cauldron is the best-known model, but Moose Toys has since released a few different variations.

Magic Mixies Crystal Ball works like the cauldron except the toy is revealed through a crystal ball. It includes the same wand and magical sounds, but there aren’t any extra potions or powders to add. All the magic takes place through casting spells with the wand.

Magic Mixies Mixlings are miniature versions of the original Magic Mixies. Each type of Mixling has special powers, such as transforming or disappearing before your very eyes. Mixies Mixlings come in a greater variety of sets than the original. Along with the cauldron, there are also the Magic Castle Playset and the Sparkle Magic Mega Pack.

While a Magic Mixies cauldron doesn’t include a refill pack, you can buy one separately. The refill pack contains all the mixtures needed to recreate the excitement of the initial cauldron reveal. In addition, they come with two spell books and an instruction manual. Refill packs are less expensive than Magic Mixies and aren’t a bad choice if you have more than one child and don’t want to buy multiple Magic Mixies. 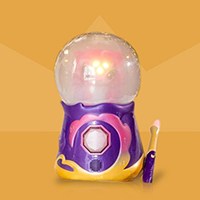 Staff Tip
Each cauldron includes some refill mist, which is good for about five uses.
Staff
BestReviews

How much do Magic Mixies cost?

Magic Mixies aren’t the cheapest toy on the market, but there are ways to save if necessary. Magic Mixies Mixlings and refill packs cost $9 to $20. The Mixlings Sparkle Magic Mega Pack is an excellent value since it contains four Mixlings and a cauldron reveal. Though the reveal isn’t as impressive as the original, kids will still have fun with it.

Spending more, from $20 to $60, opens your options to additional Magic Mixies Mixlings, such as the Castle Playset. Most of these include one Mixling and a wand, which means you don’t necessarily have to purchase a set of Mixlings to enjoy it. This is also the starting price range for the original Magic Mixies Cauldrons.

Spend more than $60 and you can find special edition Magic Mixies Cauldron models or the Crystal Ball model. When original Magic Mixies are in high demand, you will find a lot of resellers charging more than the original price.

The process of unveiling a Magic Mixie takes about 15 minutes, from unboxing the toy to adding the potion elements. 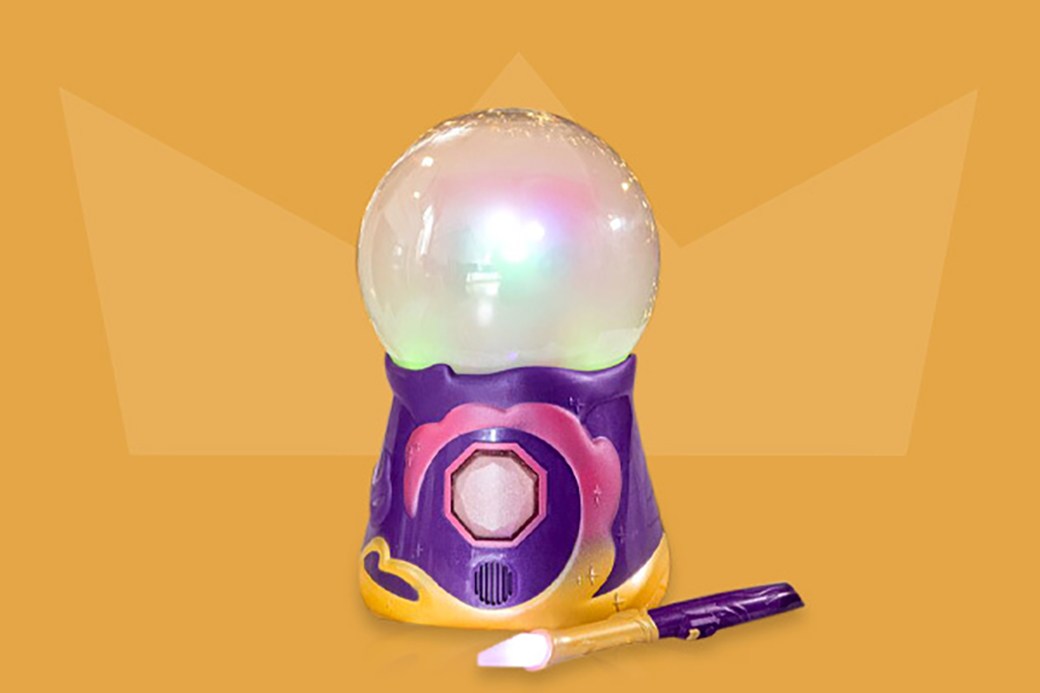 The toy includes instructions on how to care for the Magic Mixie once it’s created. Stroking the area above its gem recharges the Mixie’s energy while leaving it alone and laying it down for an extended time will recharge it.

A. Magic Mixies aren’t dangerous if used correctly. The Magic Mixies mist is primarily made of vegetable glycerin with some additional ingredients. What’s most important is that there are no hands or fingers in or near the cauldron as it fogs to reveal the Mixie. Be sure to add water to the correct side of the cauldron when reusing it. There is an indicator that shows which side is safe for water and which side isn’t.

Q. Can my child reveal Magic Mixies more than once?

A. Yes, Magic Mixies can be revealed up to five times. Just rinse any leftover residue out of the cauldron and make sure it’s set on Create mode. You can also buy a refill pack, which is good for more than 20 reveals.

Q. Do I need to charge the Magic Mixie before using it?

A. Yes. While some instructions say that the cauldron is already charged, that isn’t always the case. Charge the Magic Mixies cauldron with the included USB cable for 60 to 90 minutes.