This jogging stroller is for serious runners who really want a stroller for running.

The swivel and lock function of the front wheel is controlled on the handlebar. A little more slimline than the other Graco joggers. Can hold a larger child with a maximum weight capacity of 75 pounds. Solid foot rest. Suspension system is on all wheels. Has a brake on the handlebar. One-handed folding. Includes a tether for your wrist.

The seat on this stroller is designed with a slight recline and does not sit up straight.

Prized for its compact portability, Rowan can fold down to less than a third of its full size for transportation and storage.

Folds down significantly. Stroller can be adjusted to accommodate infant car seat. Folds down quickly and easily using Graco's signature design. Tires are air-filled to give you a smoother, more comfortable ride. Two storage areas for accessories. Hood and visor help to guard against sun and drizzle.

Folds up well compared to other models, but some small customers may still struggle with it.

With a jogging stroller, infant car seat, and base, this travel system is a great investment for first-time parents that can serve you for several years.

Neutral colors for either boys or girls. Weight limits accommodate child from infant to preschool size. Comes with infant car seat, which clicks into the stroller. Also includes an infant seat base for the car. Stroller folds with the pull of a handle. Nice ride on these air-filled, rubber tires.

This stroller is really big. You may want to measure your trunk to make sure it will fit in your vehicle. It may be a bit heavy for some to lift.

This stroller folds a bit more compactly than similar strollers.

This model is more expensive than some other Graco models.

With a variety of different seating configurations, the Modes jogger gives you options.

Very large. Does not accommodate all Graco car seats, so check compatibility before ordering. 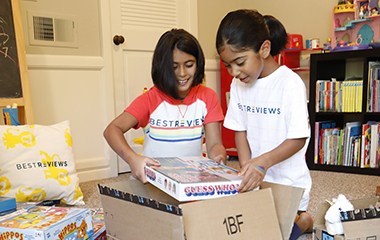 Becoming a parent changes your life completely, but it doesn't mean you can't enjoy activities you took part in before you had kids. With the help of a Graco jogging stroller, you can reap the physical and psychological benefits of exercise regardless of whether you get any time to yourself. The bonus is that many kids enjoy being pushed around at speed, and many find it soothing enough to drift off to sleep. 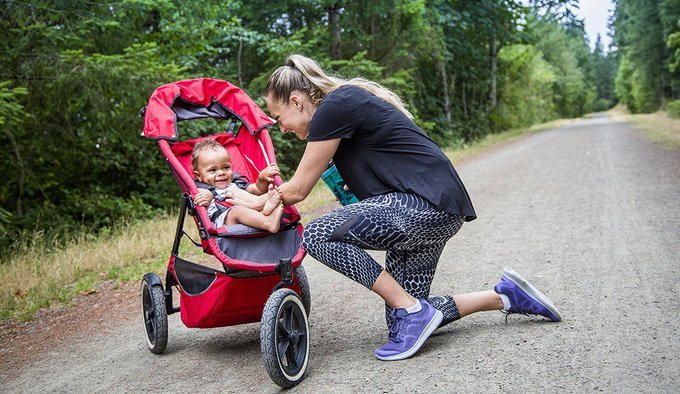 Jogging strollers tend to be slightly wider than standards strollers. The width gives them extra stability when turning at speed.

The majority of Graco jogging strollers feature air-filled tires rather than the solid rubber tires found on standard strollers. Although air-filled tires could get punctured and deflate, they provide a much smoother ride, which makes all the difference at a jogging or running pace. Graco is focused on quality, so you'll find these tires are made from tough materials that don't puncture easily. There's also a valve in each tire so you can easily pump it up if it starts to deflate.

A few Graco jogging strollers come with never-flat solid rubber tires. Notably, these models feature suspension systems that absorb shock so the tires don't have to.

When jogging with your child, the front wheel on the stroller must be locked in a forward-facing position. This makes it easier to turn at a quick pace and less likely that you'll lose control of the stroller, which is easy to do with a front wheel that moves side to side. Some jogging strollers feature completely fixed front wheels, but this makes them difficult to maneuver when you're not jogging.

Graco jogging strollers feature swivel front wheels that you can lock into position before you start running. This makes them quite versatile, since they're just as useful for a trip around the mall as they are for running trails.

Did you know?
Graco jogging strollers are lightweight to make them easier to push when jogging or running.
STAFF
BestReviews

Some Graco jogging strollers are sold as travel system packages. With a travel system, you receive both a stroller and an infant car seat. The car seat is compatible with the stroller, so you can lift it from the car, secure it to the frame, and go about your business.

You may find that your chosen Graco jogging stroller isn't suitable for young babies unless combined with an infant car seat. In this case, it makes sense to buy a travel system, as it usually costs less than buying a stroller and car seat separately. Of course, if you already own an infant car seat or you're buying a stroller for a toddler, a travel system wouldn’t be of much use to you.

Don't underestimate the convenience of a jogging stroller that's quick and easy to fold. When you're trying to set up or pack away your stroller with a baby in one arm, you don't want to be stuck with a model that feels like you need an advanced degree in engineering to unfold. Some Graco jogging strollers have quick-fold or one-hand fold features that make the process a breeze.

Storage space is important in jogging strollers, since you'll still need to bring your diaper bag packed with everything your child might need. Graco jogging strollers have a significant amount of underseat storage. Some also have cup holders, phone pouches, and similar accommodations.

The UV-protective canopy on a Graco jogging stroller helps shield your little passenger from the sun. Some models feature canopies with peekaboo windows, allowing you to look through the canopy to check your kid.

For your safety
All Graco jogging strollers are JPMA certified to give you some peace of mind about safety.
STAFF
BestReviews

Inexpensive: Inexpensive Graco jogging strollers cost between $140 and $200. Although they have some great features, they generally can't accommodate young babies unless paired with a Graco infant car seat (sold separately).

Mid-range: Mid-range Graco jogging strollers are priced from $200 to $300. These strollers generally accommodate babies of all ages in a range of positions. You'll also find some travel systems in this price bracket.

Expensive: High-end Graco jogging strollers cost as much as $300 to $450. You'll find a variety of jogging stroller travel systems here. The strollers themselves have top-notch features, such as one-hand foldability and adjustable rear-wheel suspension. 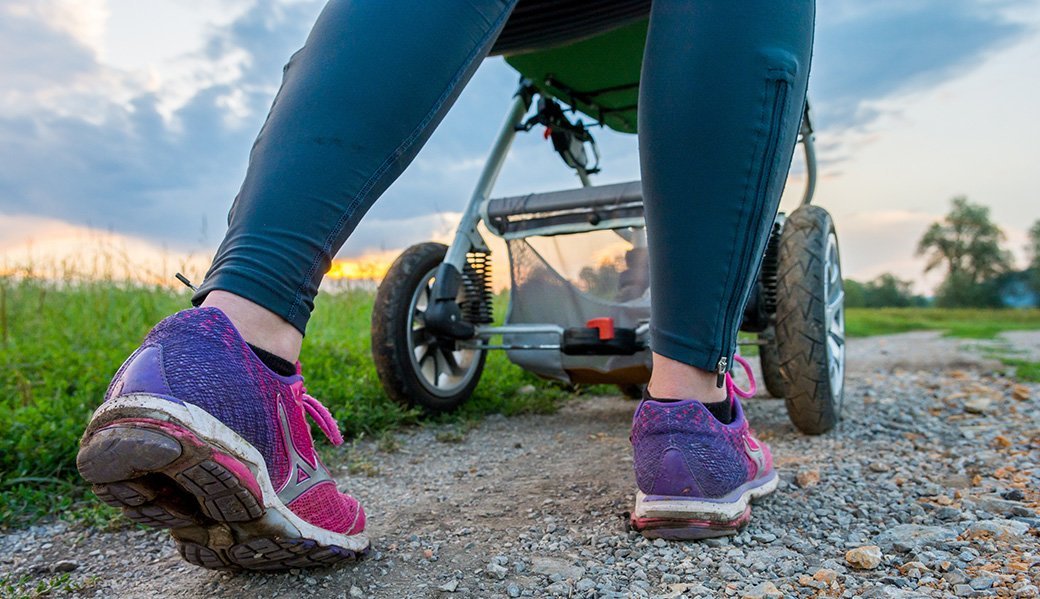 The majority of Graco jogging strollers feature toddler trays with cup holders, which are ideal for snack time. You can also remove them, and most parents appreciate having the option to do so.

Q. Are Graco jogging strollers suitable from birth?
A. Realistically, you aren't going to want to go jogging when you've just given birth and have a newborn to look after. However, most Graco jogging strollers are suitable for infants as well as older babies and toddlers. Check carefully, however, because some models come with all the parts you need to accommodate an infant, whereas others involve the use of a compatible infant car seat, which is sold separately (expect in the case of travel systems).

Q. Are Graco jogging strollers suited to general use as well as jogging?
A. Jogging strollers are designed specifically for jogging. They turn quickly and easily at speed and are balanced just right for this kind of activity. While you could use a Graco jogging stroller for general strolling — at the store or the park, for example — they're less maneuverable and balanced at a walking pace than standard four-wheeled strollers.

If you're willing to put up with some quirks, you can absolutely employ your Graco jogging stroller for general use, but many parents like to have a standard stroller in addition to a jogging stroller.

Q. Is it safe to jog with my baby?
A. Yes, it is safe to jog with your baby, as long as you use the proper stroller for the job and exercise caution and common sense. Make sure the front wheel is locked in position before starting your jog or run, as it's easy to lose control with the front wheel in swivel position. We recommend jogging on smooth trails or at the park rather than on the sidewalk because, if you were to lose control of the stroller, an accident is much more likely to occur near a road. Always make sure your child is properly secured by the safety harness. 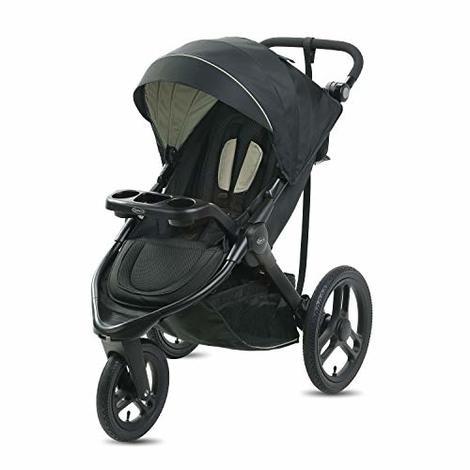 Prized for its compact portability, Rowan can fold down to less than a third of its full size for transportation and storage. 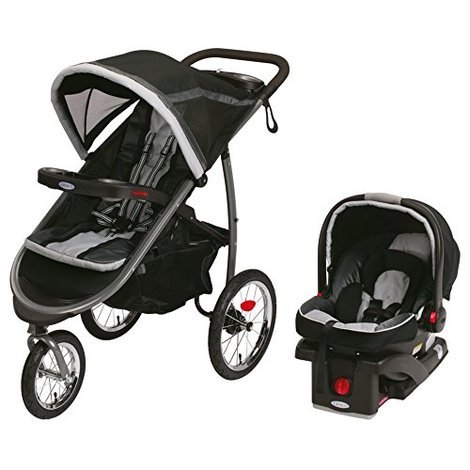 With a jogging stroller, infant car seat, and base, this travel system is a great investment for first-time parents that can serve you for several years. 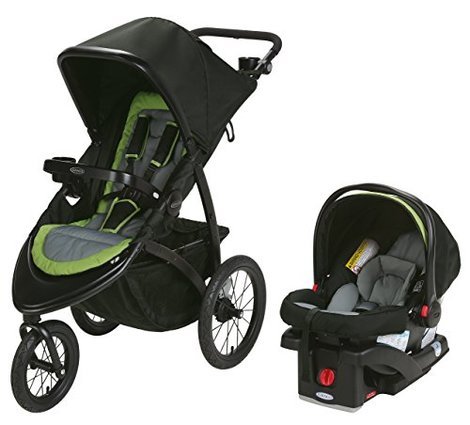 This stroller folds a bit more compactly than similar strollers. 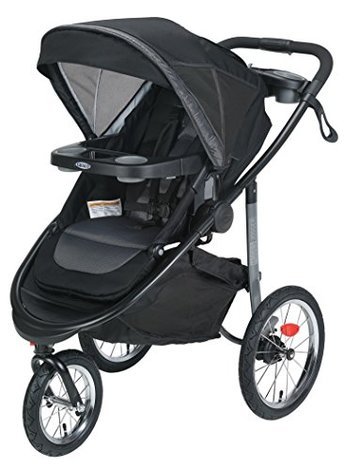 With a variety of different seating configurations, the Modes jogger gives you options. 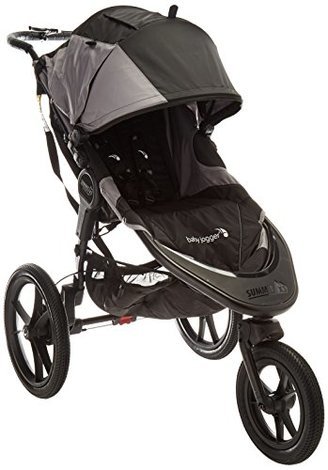 This jogging stroller is for serious runners who really want a stroller for running.