A sleek design and fast transfer speeds make this both a stylish and practical drive at a reasonable price.

Stylish and sturdy, with a very low profile. Fast transfer speeds. The plastic end makes for easy removal, particularly when the drive gets hot.

While it doesn’t affect performance, the drive can get quite hot. Lack of a connector cover may turn off some users.

A simple, no frills drive that offers 32GB of storage at a good price.

Features a small size and fast transfer speeds at a low cost. The built-in slider cover protects the drive without the annoyance of having to keep track of a cap.

The slider can stick a little when you try to use it, requiring a little force to open it. Some users have reported problems with the drive becoming write-protected.

A highly-rated and very sturdy drive that can take a lot of abuse.

Metal housing is light-weight, solid, and looks great. High quality and nearly indestructible. Very sturdy for use on a keychain, and no cap to lose.

Can get very hot when transferring large files. Some users report that the transfer rates aren’t that great.

We love the price for this high-capacity flash drive, although the USB 2.0 may put some users off.

High-capacity at a great price. Features an LED indicator and a slider so the end retracts into the housing for protection. Frustration-free packaging.

USB 2.0 will seem slow, particularly to those used to USB 3.0. Plastic housing seems a bit flimsy. Some users report problems with write-protection and read-only issues.

While this drive may be physically tiny, it can store a ton of files. Put a key ring on it to help in removing it and keep track of it when it’s not in use.

Large storage size in a super-small body. The low profile is great for laptop users who worry about accidentally breaking off their drive. Fast read and write speeds. Comes with a cap.

The physical size can also be a problem, as some users might find this drive hard to remove from the computer, as well as easy to lose. It can get very hot.

Backing up data from a computer or mobile device has never been easier. You can transmit data to the cloud, save it to an external hard drive, or transfer your data easily and quickly to a flash drive. Now, we’re not going to judge you on how often you’re backing up your data. (We’ll just assume you’re like most people and it’s probably not often enough.) Instead, we want to help you successfully back up your data by figuring out how to pick the best flash drive.

The great thing about flash drives is that they’re easy to use. You can also carry important files with you wherever you go and protect your files with encryption on a flash drive, which makes these devices very versatile.

At BestReviews, we pride ourselves on the detailed research we perform in each product category, including flash drives. We seek to give our readers the information they need to make a smart purchase. Additionally, we never accept free samples from manufacturers, which means you can feel comfortable that our selections and product reviews remain free of bias. Please continue reading this flash drive shopping guide to understand the technology behind these handy little devices and how you can pick the best one for your needs. 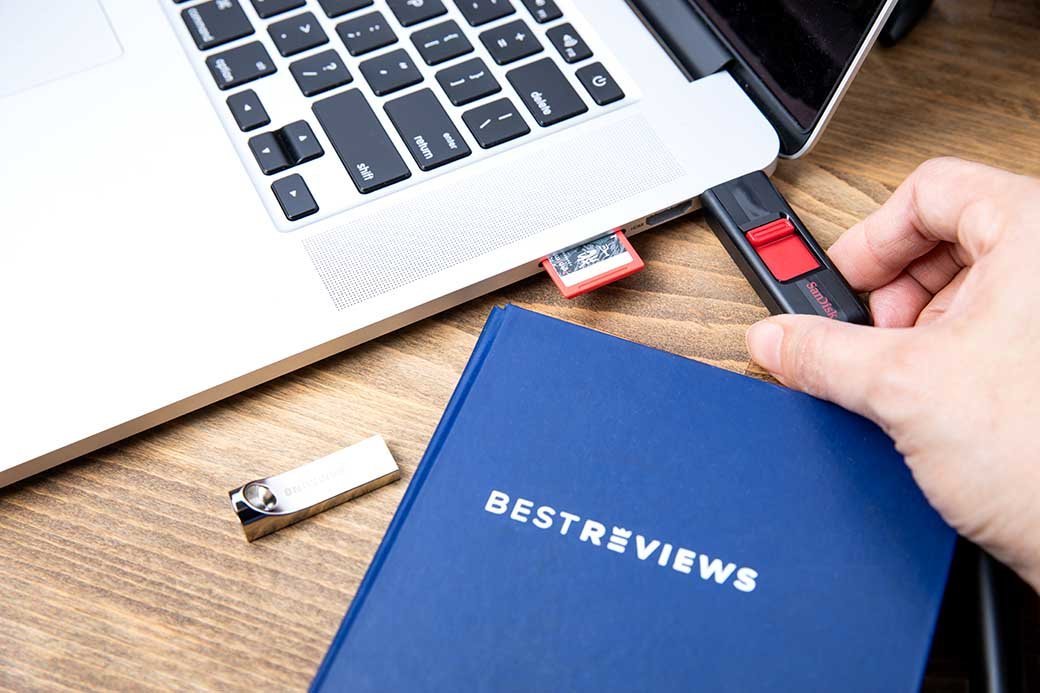 Most flash drives are shaped like a five-stick pack of gum and are about the same size. A flash drive’s hard plastic or aluminum cover protects it from rough treatment. Also, flash drives don’t have moving parts. They can survive being dropped without damaging the data.

What is a flash drive?

A flash drive is a small portable device that uses a type of electronic memory storage called flash memory to store your data. Flash memory requires no moving mechanical parts, and the flash drive has no moving parts either.

To store individual bits of data, the silicon in the flash drive uses a grid layout. Each section of the grid, called a cell, contains two transistors that work together to store a bit of data. The method of application of an electrical charge between the transistors determines whether the cell has a zero or a one stored in it.

The flash drive needs electrical power to read and write data, but it works so well because it holds the zero or one setting in the cell (the data) even after you’ve removed the drive from its power source.

A solid-state drive (SSD) also uses flash memory technology to store data, the same technology in a flash drive. However, an SSD offers permanent data storage inside a computer or mobile device, which differs from the portable storage of a flash drive.

If you drop a hard drive, the platters can break, meaning you lose your data. Because SSDs store data electronically rather than with moving parts, they aren’t susceptible to this particular sort of damage and data loss. However, it’s more expensive to save data on an SSD than on a traditional hard drive.

Did you know?
A permanent solid-state drive uses the same flash memory technology as a portable flash drive.
STAFF
BestReviews

The vast majority of flash drives make use of a USB connection to share data with other devices. USB ports are so common on so many types of devices that using USB flash drives gives you a lot of versatility.

Most flash drives use the most common USB Type-C connector. However, you occasionally will see a few other options for connecting a flash drive.

Some types of flash drives have multiple connection options built into them, giving them an X shape. You may find Micro USB  and USB Type-C connections along with a Lightning connection in this type of flash drive.

One other thing we should mention: because a memory card uses the same type of flash memory technology as a flash drive, some people think of memory cards like flash drives. You certainly can use them for backing up data or sharing data between devices, but because memory card slots aren’t as common as USB slots, USB flash drives are more popular.

USB flash drives use one of two transmission speed standards.

One final thing to note: regardless of the USB standard used by a flash drive, it will still be able to use any USB port to share data. Because USB technology is backward compatible, you can use a USB 2.0 flash drive in a USB 3.0 port on a computer, for example.

Did you know?
A flash drive with a USB connection is also called a thumb drive, jump drive, pen drive, USB stick, or memory stick. Some flash drives make use of the USB 3.0 standard for faster data transmission. Older flash drives use USB 2.0, which is slower.
STAFF
BestReviews

The other factor that determines price is the USB standard in use by the flash drive. Flash drives with a newer USB standard and faster transmission speed will cost more. You can expect to pay anywhere from $5 to $40 and more for a flash drive.

You can find USB 2.0 flash drives with 8GB or less storage capacity under $5. You often find these older drives sold in packages of four or more.

"Some newer flash drives protect your data using a fingerprint scanner on the case."
STAFF
BestReviews

Flash drives that have 256GB, 512GB, or 1TB of data storage cost $40 and more. (Understand that 512GB and 1TB or larger USB drives are very rare right now, and their build quality is questionable.)

You also will pay in this price range for flash drives that contain a Lightning port for use with Apple iOS mobile devices. 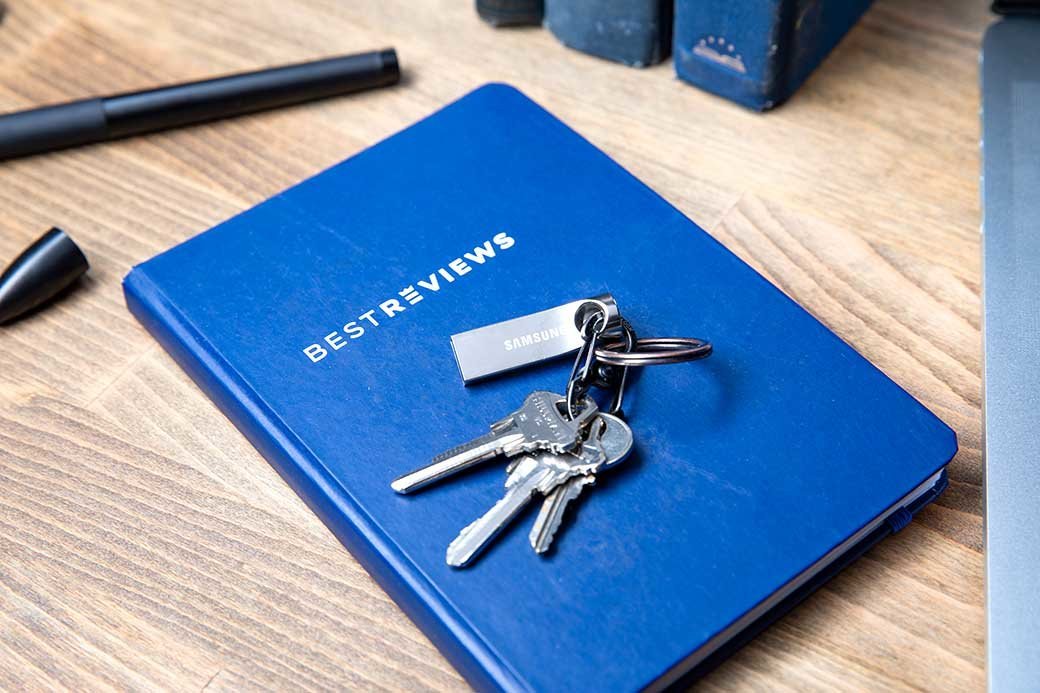 If you want even more convenience, look for a flash drive case that can be connected to a key ring.

Q. What are some good reasons to use flash drives?

A. Because flash drives are so small, they’re perfect for taking computer files with you from one location to another. Some people use a flash drive as a backup data option for their computer and carry the flash drive with them. You can also copy a file to a flash drive and print it at another location.

Q. Why wouldn’t I just burn data to a CD-ROM?

A. Certainly, some people like burning backup copies of computer data to CDs, but this process takes a lot longer than using a USB flash drive. Also, a flash drive can hold a lot more data than a single CD. You’ll need to use several CDs to match the data storage on a single flash drive. Finally, USB technology is more commonly available in modern computers than CD drives, so you can use the data on a flash drive in more locations.

Q. How can I keep my USB flash drive data safe?

A. If you’re worried about losing your flash drive and someone else gaining access to your data, you have some options for protecting the data. Some flash drives can encrypt the data, and it can only be unlocked with a password or key. You can use various third-party apps or software to encrypt a flash drive on your own, too. Some flash drives require a thumbprint to unlock the data.

Q. Where can I use a flash drive?

A. Any type of computer can access a flash drive, as long as the computer has the right port. You just plug the flash drive into the device, and you should be able to read the files stored on it. Desktop computers, network computers, laptop computers, and some mobile devices like digital cameras and phones can read USB flash drives. 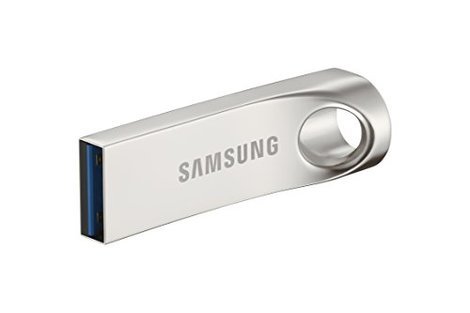 A highly-rated and very sturdy drive that can take a lot of abuse. 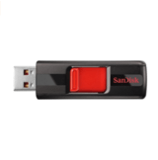 We love the price for this high-capacity flash drive, although the USB 2.0 may put some users off. 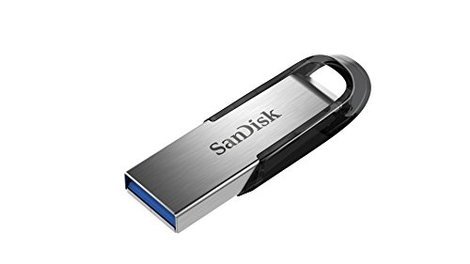 A sleek design and fast transfer speeds make this both a stylish and practical drive at a reasonable price. 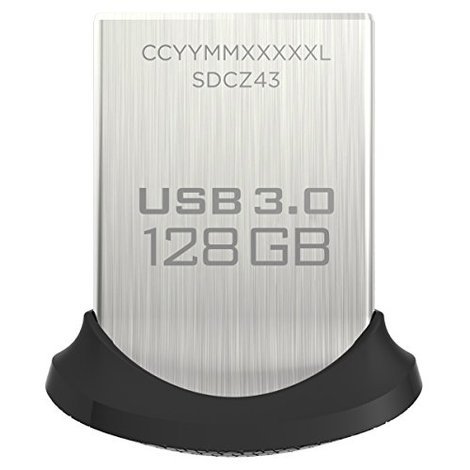 While this drive may be physically tiny, it can store a ton of files. Put a key ring on it to help in removing it and keep track of it when it’s not in use.

A simple, no frills drive that offers 32GB of storage at a good price.