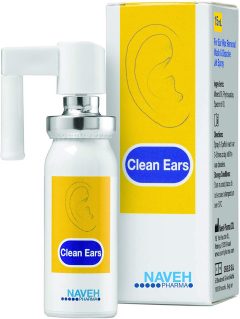 An easy-to-use system that will provide you with relief quickly.

Made of natural ingredients and will not irritate ear canal or surrounding area. Removes wax plugs and prevents future hardened wax buildup. Safe for children as well as adults. Formula contains spearmint essential oils as a natural antiseptic.

Formula is gentle and may require repeated use for heavy buildup. 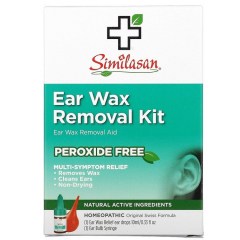 A formula with natural ingredients for removing wax without drying or irritating ears.

Some feel that the dropper is difficult to use.

Best option if the idea of sticking something large in your ear makes you squirm.

Users love that the single-dose pipette ensures they aren't using too much or too little of the solution. Smaller and less intimidating compared to other kits.

For best results, you should lie down for 30 minutes. 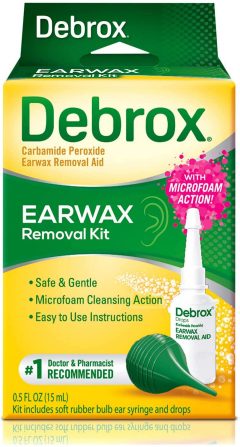 Solid option for those who don't want to stick anything into their ear canals.

Reviewers say this kit unclogged their ears faster than other products. Includes drops and a bulb syringe. Drops crackle as they loosen wax. Some users get great results from drops alone.

Be prepared to use the drops and bulb for up to 4 days to remove all wax. 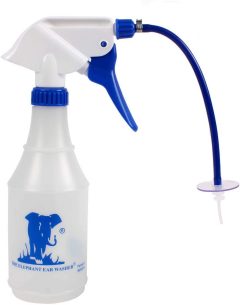 The kit used in most doctors' offices to remove earwax.

Owners love that there's absolutely no way to insert tip too far into the ear canal and cause damage. Reviewers rave that this has saved them money by eliminating the need to visit the doctor for the same service. Works for most people during first use.

No instructions included, but directions are easily found online. You'll need a basin to catch the wax and water. 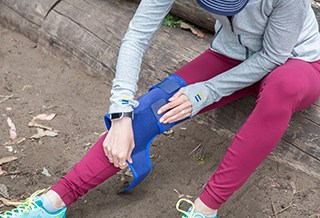 When it comes to cleaning the ears, most people rely on cotton swabs, but cotton swabs can not only pose a danger to your ear, but they’re usually not very effective in removing heavy wax buildup. If you’re dealing with ear discomfort or hearing loss due to excess wax, it might be time to look into an earwax removal kit.

Not all earwax removal kits are the same, however. 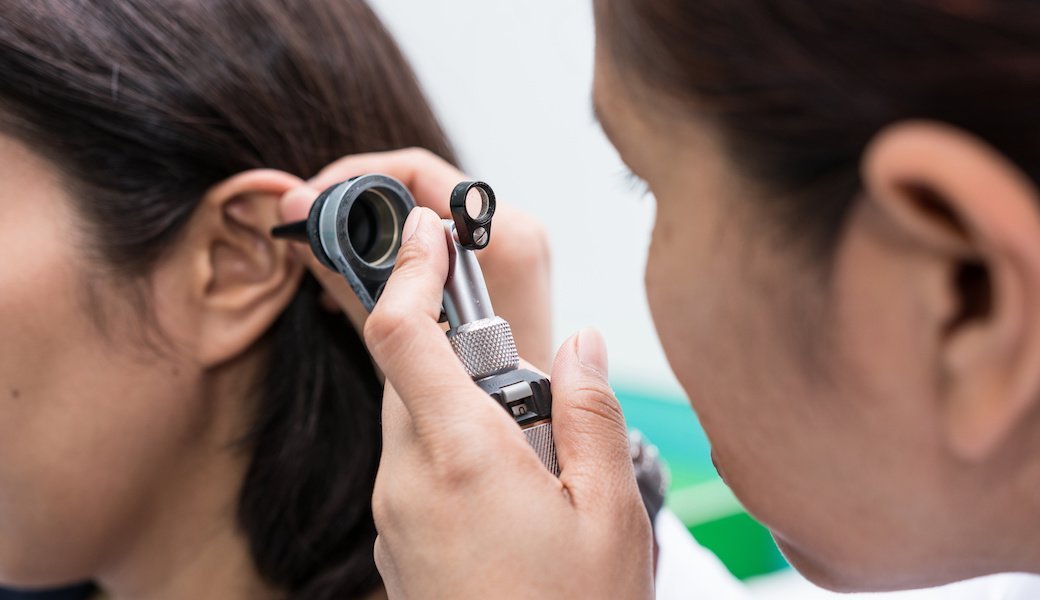 Both middle-ear and external-ear infections can result from an earwax blockage.

What is earwax buildup?

While it might seem like a nuisance, earwax serves an important function in protecting your ears. It’s actually a waxy oil called cerumen that’s produced inside the ear canal. It helps keep dust, microorganisms, foreign particles, and even water from entering and irritating your ears. The cerumen eventually makes its way out of the ears so it can be washed away.

In some cases, your ears may produce too much wax. That excess wax can harden and cause a blockage that can affect your hearing. Blockages are sometimes caused by using cotton swabs to clean the ear canal because the swabs actually wind up pushing the wax in deeper. Individuals who use hearing aids or earbuds could have an issue with wax buildup and blockages, too.

If you’re experiencing earwax buildup or blockages, you might notice some key symptoms, including the following:

Excess earwax can also lead to an ear infection, so it’s important to see your doctor if you develop any of the following:

Caution
Never use in the ear an irrigation system meant for the mouth because it can exert too much pressure to be safe for the eardrum. Only choose kits that are designed specifically for earwax removal.
STAFF
BestReviews

For mild earwax buildup, a removal kit with softening drops is often the best bet. The drops work by softening the hardened wax in the ear canal so the wax can then work its way out of the ear on its own.

Use: This type of kit is the easiest to use, though it requires more patience to see results. To use the drops, lie on your side with the affected ear facing upward and administer the recommended number of drops to the ear. It’s important to stay still for about five minutes so the drops have time to soften the wax.

When you sit up, blot the auricle, the outer portion of the ear, with tissue to remove any residue. Repeat the process on the other ear if it’s also affected. In most cases, the instructions will recommend that you use the drops more than once a day over the course of a few days to fully remove all the wax.

Many earwax removal kits with softening drops also include a tool for irrigating the ear. After you’ve given the drops time to work, flushing the ear with warm water helps to wash the loosened wax from the ear and provide faster results than just using the drops alone.

Price: Earwax removal kits with softening drops usually range in price from $4 to $19.

Earwax kits with an irrigation system are also fairly common. The principle behind this type of kit is simple: you flush the ear with water to help remove excess wax from the ear canal.

Components: Some of these kits include a bulb or syringe that makes it easy to squeeze a small amount of water into the ear without putting too much pressure on your eardrum. Other kits use a spray bottle dispenser and a small plastic tube to direct the water into your ear. Many people use lukewarm purified water with this type of kit, while others use a solution of warm water and hydrogen peroxide.

Use: To use an irrigation system, sit or stand upright. Gently pull upward on your ear and insert the syringe or tube into your ear. Squeeze or push on the container to release the water into your ear canal, tip your head to the side to enable the water to drain, and then blot the area dry. For the most effective cleaning results, you might need to repeat the process. You can also boost your results by using wax softening drops a half hour to an hour before using the irrigating kit.

Price: Earwax removal kits that use an irrigation system usually range in price from $5 to $50.

Some earwax removal kits include handheld tools that help extract wax from the ears. While the tools are designed to pull wax out of the ear rather than push it farther in, they can still cause injury if you don’t use them carefully and gently.

Components: These kits contain three to eight tools, including specially designed curettes that remove the wax without damaging your eardrum. Most tools have some type of barrier built into the handle to prevent you from inserting the curette too far into the ear. Some kits have tools with LED lights, so you’re better able to see what you’re doing as you remove wax from your child’s ears.

Choose a tool set that uses medical-grade stainless steel, so you can trust that the tools are durable and won’t rust. Stainless steel is also easy to clean, which is important because you should only use sanitized tools. To keep your tools clean, opt for a kit that comes with a storage container to keep them organized and dust-free so they’re always ready to use.

If you’re nervous about injuring your ear with metal tools, you can also find earwax removal tool kits with disposal plastic curettes. You don’t have to worry about sanitizing the tools because you simply throw them away when you’re finished using them.

Price: Earwax removal kits with handheld tools usually range in price from $6 to $15. 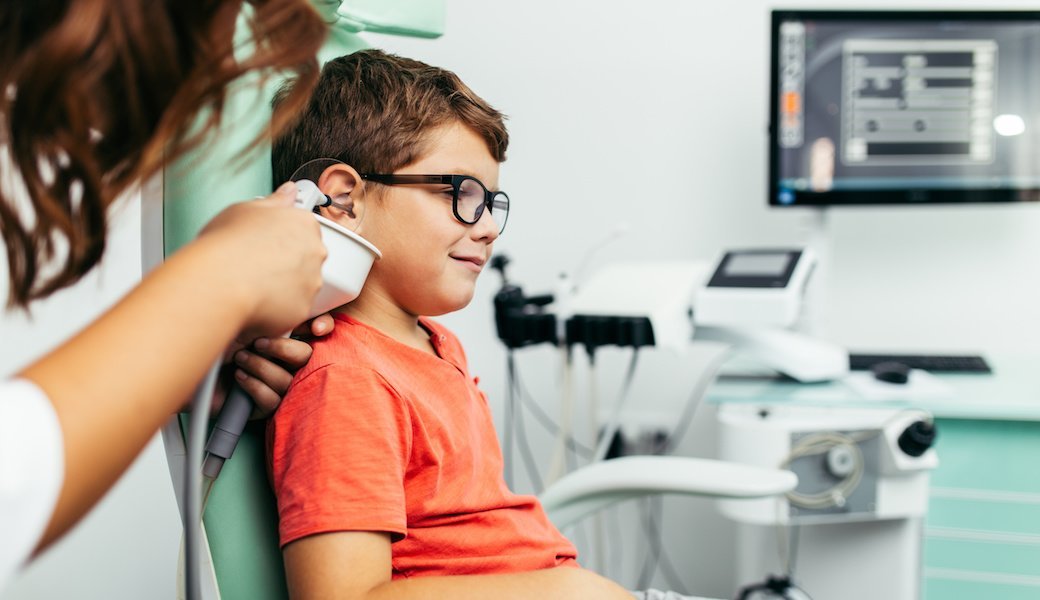 Before using earwax removal tools, always wash the tools with soap and water or disinfect them with alcohol.

Q. What causes earwax to build up?

A. Earwax builds up very easily in people who are naturally predisposed to producing excess earwax. Individuals who suffer from frequent ear infections can also have a problem with earwax buildup. If you have a habit of cleaning your ears with cotton swabs, you could be causing an earwax issue by pushing the wax farther into your ear, where it hardens and becomes impacted. It’s also normal for earwax to become drier as you age, so older people often have an issue with wax buildup. In addition, individuals with narrow ear canals, excessive ear hair, or osteomas are also prone to earwax buildup.

Q. Is it safe to use an earwax removal kit on children?

A. It usually depends on the type of kit and the age of the child. Before using any earwax removal kit on a child under the age of 12, always consult a doctor. In most cases, kits that use softening drops are safe for use on children because nothing has to be inserted in the ear canal. Kits with irrigation systems or tools can be dangerous for small children.

Q. Are there are any health issues that make using an earwax removal kit a bad idea?

A. Individuals who have a perforated eardrum or recently had some type of ear surgery should avoid earwax removal kits unless directed by a doctor. If you’re experiencing fever, dizziness, ear discharge, or ear pain, you should also talk to your doctor before using a kit. 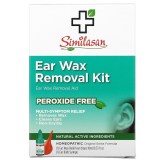 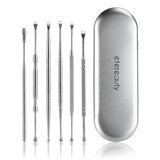 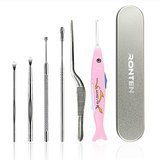