Versatile dovetail jig that includes multiple templates to ensure you can do the job exactly how you want.

Very easy to set up the unit no matter which template you're using. Can precisely and accurately set the router bit depth of the unit. Clear instructions included. Unit manufacturer provides a highly trusted name in this tool category.

Materials included in the jig's construction don't stand up well to tough jobs. 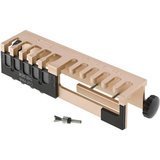 Inexpensive dovetail jig that will be very easy to use for someone who is new to this hobby.

Less expensive than most dovetail jigs on the market. Very easy to use. Design forces you to align the pieces properly every time before you can start cutting. Makes use of aluminum construction, ensuring good results for basic jobs.

Not a heavy-duty tool or one that can perform a lot of different kinds of cuts.

Works well with many different widths, lengths, and thicknesses of wood, ensuring a good performance.

Works best for hobbyists looking to perform small or average-size projects. Reasonable value. Offers a wide variety of different types of cuts. Includes everything you'll need to get started cutting, along with detailed instructions.

Not designed for heavy-duty projects or pro-level quality. 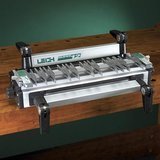 Unique approach offers extraordinary flexibility without the need for separate templates and provides for much more than standard dovetails.

In terms of quality, none. However, it's expensive and there is a learning curve.

Low-priced unit that will work well for someone just starting out with a dovetail jig.

Basic unit that's relatively easy to use for hobbyists. Kit includes everything you need to start using the dovetail jig immediately. Steel base provides plenty of stability to the unit. Many different thicknesses of wood will fit.

Only includes one template, which limits the types of cuts you can make.

A well-made dovetail joint invariably signifies a quality piece of furniture. Historically, these joints were cut by hand with just a saw and a chisel, and so it was a way for fine woodworkers to display their skill.

Today, there are a variety of dovetail jigs available which, when combined with a router, make the job much faster and easier. With a little care, the home woodworker can replicate craftsmanship that would otherwise take days to produce. If you’re searching for the right dovetail jig for your workshop, we can help.

We’ve been looking at what the market has to offer so we can help you choose the best dovetail jig for your needs. Our recommendations represent a broad range of performance and value solutions. In the following buying guide, we discuss the mechanisms in more detail, offer some useful tips, and answer some common questions about dovetails. 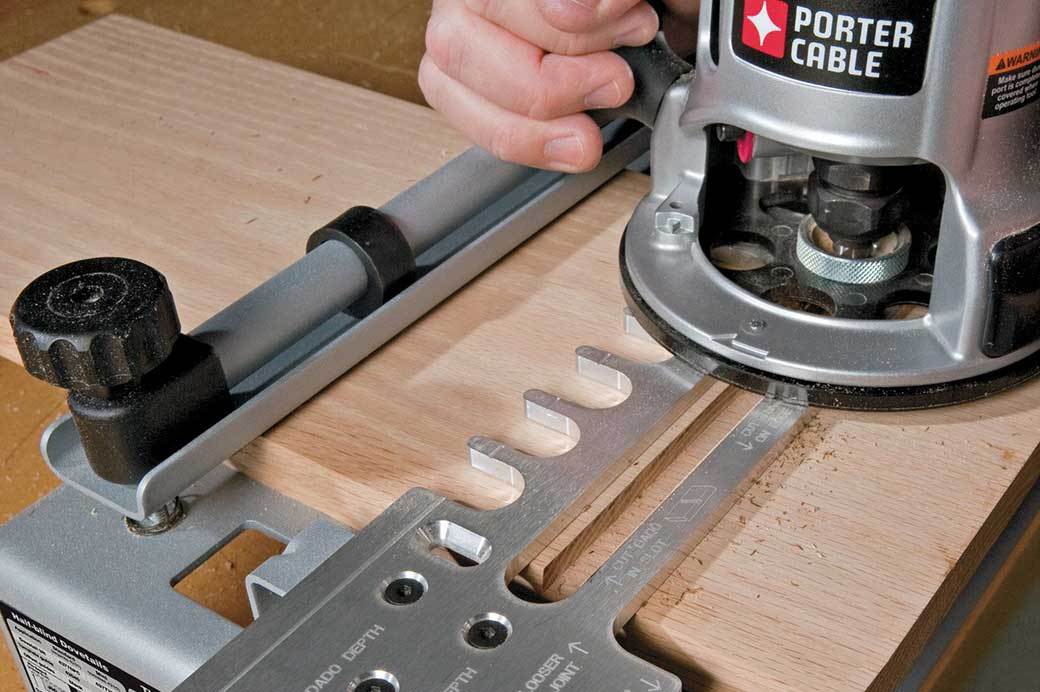 There are lots of different dovetail joints. The best jigs don’t restrict you to one type, they give you the freedom to experiment.

Finger joints: These joints, also known as box joints or comb joints, have straight sides and are much easier to cut than dovetail joints. However, because the two pieces slide together easily, they can also come apart quite easily. To keep them together you need either nails or glue.

Dovetail joints: These joints have angled sides. There’s only one way to put them together, and, once assembled, they will only come apart in one direction. For example, if you use a dovetail to attach a drawer front, it’s absolutely secure. No amount of pulling on it will ever make it come undone. Provided the joint is well cut, there’s no need for glue or nails. Done properly, a dovetail is not only a thing of beauty but it’s also incredibly strong. Dovetail furniture made hundreds of years ago is still intact today.

There are two parts to a dovetail, called “tails” and “pins,” which interlock to form the joint. Each is a similar but different shape (like a dove’s tail). A jig needs to enable you to cut both.

Two-step: The cheapest dovetail jig is a simple toothed guide (often called a comb because that’s what it resembles). Each side of the comb is a slightly different shape. The first piece of wood that you want to join is held in a vise, the jig is then clamped to it. An angled router cutter is used to form the tails or pins. The other piece of wood then has to be held in the same way, with the jig turned around and clamped again to create the second part of the joint.

The advantage of this type of dovetail jig is there’s no limit to the width of board you can join. You just keep repositioning the jig. The disadvantage is that that there are several steps, and things can go wrong at each if you’re not careful. Secure clamping and accurate positioning are absolutely critical. Any error in alignment means the joint won’t work. This type of jig will usually only allow one size of dovetail, so if you want others, you’ll need to buy a different jig.

One-step: To overcome these problems, a more complex type of jig was developed. Instead of clamping the jig to the board, the boards are clamped to a stationary jig. This clamps both boards at the same time – one vertically, one horizontally. Once clamped and aligned (which still requires care), the tails and pins of the dovetail are cut simultaneously. Different templates (combs) allow different-size dovetails and different spacing. Most jigs allow you to cut “through” and “half-blind” dovetails, the two most common types. Some allow you to cut more decorative types and box joints as well (see below).

This type of dovetail jig is most often recommended for novices. It’s much faster, and though it’s possible to make errors, they are much less likely. The only drawback is that the size of board is limited by the width of the device, and hence different-size models are offered. Most are 12-inch (which is more than enough for the majority of woodworkers), but a few 18-inch versions exist.

A more advanced version of this kind of clamping jig has individual “fingers” rather than a comb. Rather than always being evenly spaced, as on fixed jigs, these can be set wherever you like across the board. This gives virtually limitless potential for highly decorative dovetails.

High-end dovetail jigs allow you to cut tails and pins in two boards at the same time. It’s much faster and should guarantee accuracy.

Templates: The majority of templates are made of aluminum. The cheaper toothed guides (combs) are sometimes made of phenolic resin, which is hard and very strong. It’s important to treat both with care. Any damage will mean the router cutter can’t follow it smoothly and won’t be able to create the joint properly. Templates are difficult, if not impossible, to repair.

Clamps: With the simple comb-type jig, you’ll need to provide your own clamps, so you want something that is easy to use one-handed. Those that clamp the wood for you sometimes have an abrasive on the gripping surface to help hold the board securely. They should have large, easy-to-operate levers that clamp in one movement.

Board thickness: Check the thickness of board the jig can accommodate. Usually this is around 1/4 inch minimum and 1 inch – or perhaps a little more – as a maximum.

Body: The main body of clamping dovetail jigs is usually steel, either painted or powder coated, with the latter being a little more durable. There should be provision to either screw or clamp the jig to your workbench for complete stability.

Router cutter: We would expect any quality dovetail jig to include at least one router cutter. Some offer several.

The strength and durability of dovetails has been proven over thousands of years. Examples have been found in the tombs of Chinese emperors.

Inexpensive: We did find a couple of dovetail jigs for around $50, and they look similar to some of our favorites, but our concerns about quality and accuracy were echoed by many owners. If it’s something you’re not going to use often, some argue they’re okay. We think that if you’re going to the trouble of cutting dovetails rather than using dowels or pocket holes, you want the results to be recognized as special. It’s fair to say you can’t produce a high-quality joint with mediocre tooling.

Mid-range: We would look at spending $150 to $200, depending on the number of templates you want (you can always add more later). There are a number of good machines in this bracket.

Expensive: If you want the ultimate in versatility, with the ability to cut unique offset, angled, or inlaid dovetails, you’ll pay closer to $300, and some go as high as $600.

Most templates or jig combs are aluminum. A few are phenolic resin, a very hard synthetic polymer used in a variety of products from circuit boards to billiard balls.

Experts recommend that woodworkers challenge themselves to hand-cut dovetails at least once. If you want to try it, the Newkiton Dovetail Marker is a big help in getting the size and positioning right. The Rockler Complete Dovetail Jig follows the same basic design as the popular PORTER-CABLE models, is competitively priced, and is produced by a company that is well known and respected by the woodworking community. While not strictly speaking a dovetail jig, the Incra I-Box Jig for Box Joints is an interesting and very flexible solution that allows similar – albeit slightly less decorative – joints to be made with a table saw. It will work with a router table, too. 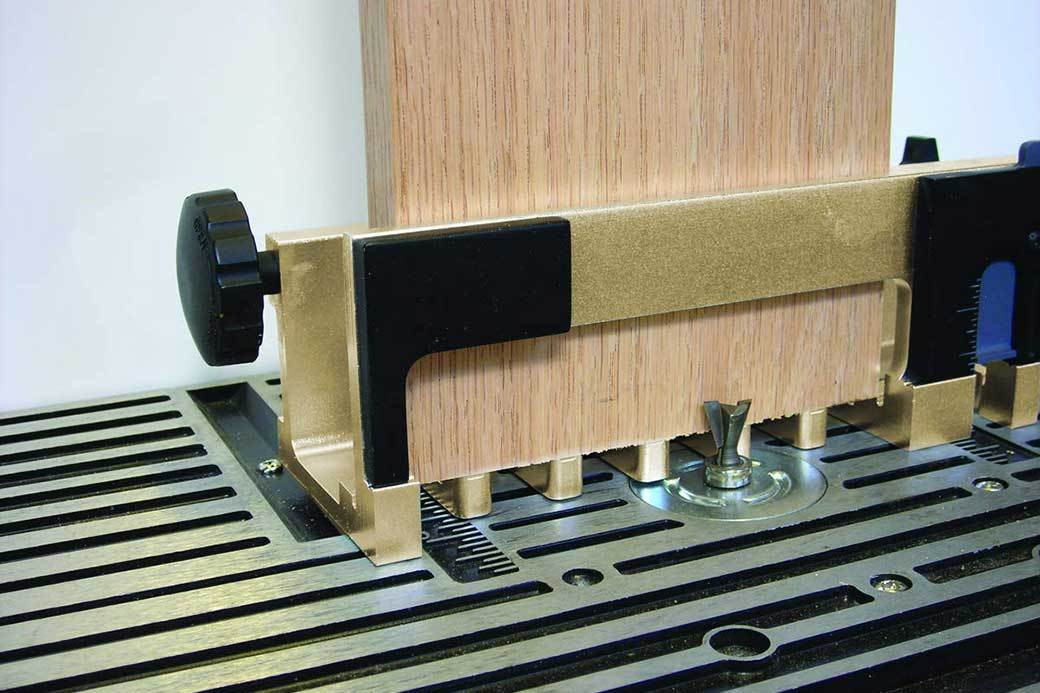 For highly decorative dovetails, consider using one dark wood and one light wood. The contrast can be beautiful.

Q. Does it matter which router I use with my dovetail jig?
A. You have quite a lot of flexibility. It largely depends on the size of the dovetails you want to make because it will impact on cutter size. If the cutter has a 1/4-inch shank, it’s probably a comparatively small jig surface, so for maximum stability and accuracy, a small to medium router would be best. If it’s a 1/2-inch shank, it’s likely you’re cutting larger dovetails (on a larger jig). You will want a machine with plenty of power to cut joints of that size.

Q. Are dovetails always used for making boxes and joining boards at 90°?
A. No. With the right jig, it’s possible to make angled dovetails so you can have boxes with sloping sides. Some craftspeople also use end-to-end dovetails to make a decorative joint between two or more flat pieces, thus creating a continuous board made of different woods.

Other Products We Considered
The BestReviews editorial team researches hundreds of products based on consumer reviews, brand quality, and value. We then choose a shorter list for in-depth research and testing before finalizing our top picks. These are the products we considered that ultimately didn't make our top 5.
Woodstock
12-Inch Dovetail Jig with Aluminum Template
O'skool
Complete Professional 12-Inch Dovetail Jig
MLCS
Dovetail Jig Set
PORTER-CABLE
Deluxe Dovetail Jig
The team that worked on this review
× 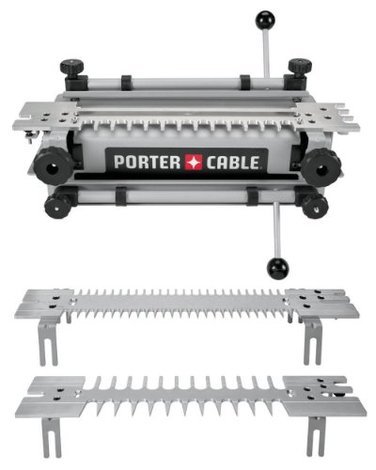 Versatile dovetail jig that includes multiple templates to ensure you can do the job exactly how you want.

Works well with many different widths, lengths, and thicknesses of wood, ensuring a good performance. 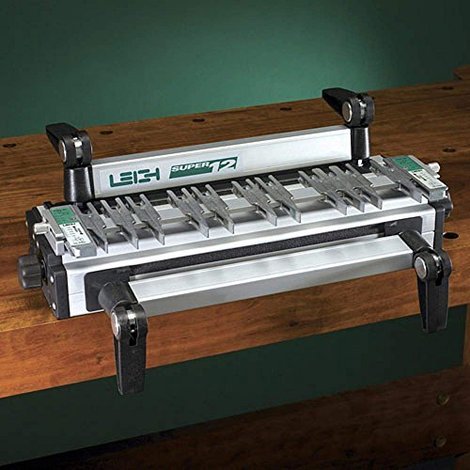 Unique approach offers extraordinary flexibility without the need for separate templates and provides for much more than standard dovetails. 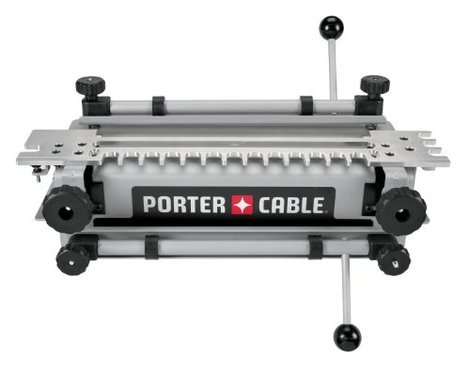 Low-priced unit that will work well for someone just starting out with a dovetail jig.

Inexpensive dovetail jig that will be very easy to use for someone who is new to this hobby.