Some reports that plates don’t heat up enough to cook inside the advertised time; could take twice as long.

A compact and economical donut maker that enables you to create up to four mini donuts at the same time.

Comes with nonstick baking plates so dough won't stick to the inside of the plates. Power light blinks off to let you know when ready. Non-skid rubber feet and latching handle provide added convenience.

Produces donuts that are very small. Can be tough to evenly spread dough into the donut maker's baking plates.

A superb option that allows you to instantly create donut holes, cake pops, and other delicious desserts.

Even heat distribution means you won't have to worry about overcooked or undercooked pastries. On/off switch is easy to use. Power-on light tells you precisely when your pastries are ready.

Quick-cook model that is affordable and maintains optimal temperature for consistently even baking.

Easy to cook multiple batches of donuts. Cooks so quickly that certain consumers report they bought this model to keep in the office break room to enjoy fresh donuts at lunchtime. Safe design reduces likelihood of accidentally burning yourself. Attractive red color.

Difficult to clean, and some reports of plates not retaining their heat after around a year of use.

A convenient option for making mini donuts, brownies, whoopie pies, and other delectable pastries at home.

May result in pastries that are burnt on the outside and raw in the middle, even if you follow the instructions.

Sometimes donut o’clock strikes at the most inopportune times. Donut cravings often start in the comfort of your own home, so why leave the house to satisfy your hankering? A donut maker is a happy solution for creating sweet treats in your kitchen within minutes. Simply whip up a simple batter, pour it in the donut molds, bake, and indulge — all within about 15 minutes.

Donut makers are geared toward those interested in baking small quantities of mini donuts, so they’re ideal for families and party hosts. They’ve also gained popularity among those who are ready to enjoy healthier homemade donuts using their favorite ingredients. Donut makers are also favorite housewarming and wedding gifts because they put a fun spin on small kitchen appliances.

If it’s time to satisfy that craving, take a look at some of the donut makers we recommend. Read on to find out more about these gadgets so you can start baking your own tasty treats. 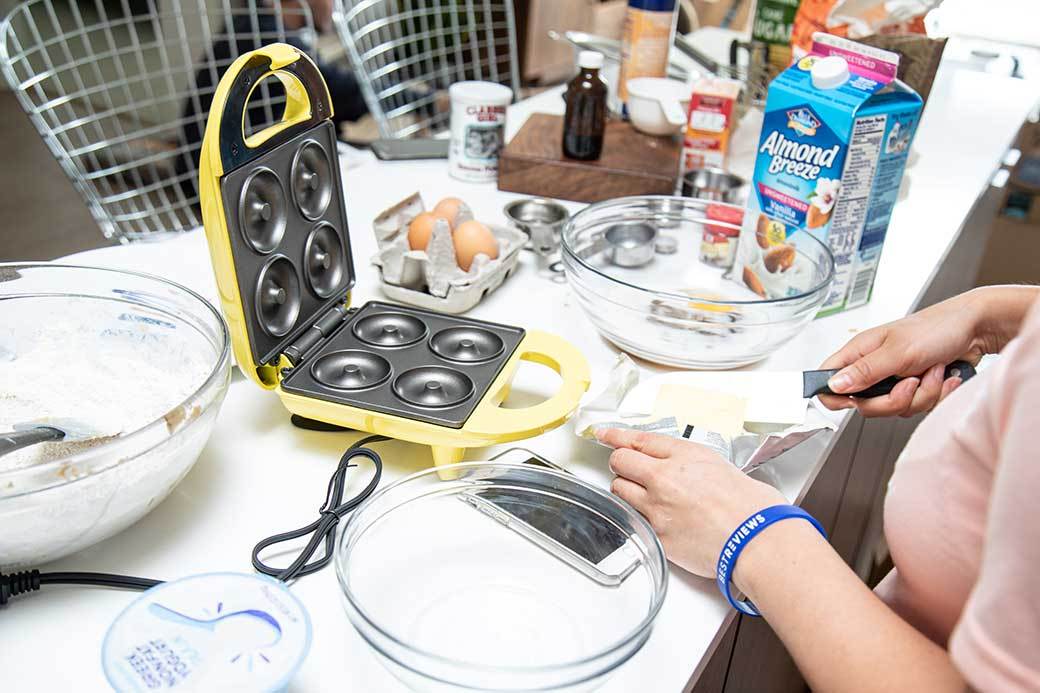 Freshly baked, non-filled donuts stay fresh up to two days in an airtight container at room temperature. If the donuts have a cream or dairy filling, keep them in the refrigerator.

Donuts you cook in a donut maker aren’t deep-fried in fat or oil; the batter is baked on hot cooking plates, similar to those in electric waffle makers. If you’re interested in baking more healthful donuts, you can experiment with different types of batter, including gluten-free, low-fat, and whole-wheat recipes.

Donut makers are generally designed for home and hobby use, not commercial. They make up to a dozen mini donuts (a few inches in diameter) at a time, though they’re built to make multiple batches back to back. It’s a practical solution — keeping the appliance small enough to store while producing a reasonable quantity of donuts to accommodate families and parties of all sizes.

The most basic donut makers have only one temperature setting, and considering these typically cost less than $30, it’s not too surprising.

Because of the small surface area on the cooking plates in donut makers, several models boast quick heating times. On average, a regular donut maker heats up in around ten minutes, whereas quick-heating models can be hot enough to bake in as little as four or five minutes. Donut makers with this feature are designed to trap and concentrate the heat, which also means they have a unique lid-locking mechanism or strategically placed donut molds.

Because baking of any kind requires a variety of kitchen tools and utensils, some manufacturers package their donut makers with these items. Mid-range and expensive donut makers, sometimes come with forks, tongs, cooling racks, or patented cleaning cloths. Considering the cost of each of these items if purchased separately, opting for a fully equipped donut maker is a sound and cost-effective choice.

Many donut makers come with a recipe booklet to guide bakers new to using this appliance. While it might seem like a minor item to include, the recipes are tested by the manufacturer in its own devices, so you’re assured they’ll work well in your donut maker. In addition to any booklet included with the donut maker, many manufacturers’ websites include a dedicated section of new recipes so you can stay on top of your baking game.

Donut makers range in price from $12 to $60, so you can essentially satisfy those last-minute donut cravings at home on any budget.

Inexpensive: The $12 to $ 30 range features small-capacity models, which typically bake four to six donuts at a time.

Mid-range: The $30 to $40 range includes the majority of donut makers, and these models bake six to eight donuts on average and often come with higher-quality nonstick surfaces that bake more evenly.

Expensive: Premium models fall in the $40 to $60 range and include a combination of features, such as removable and additional cooking plates, adjustable temperature settings, and matching accessories. Some donut makers at this price also cook as many as a dozen donuts at a time. 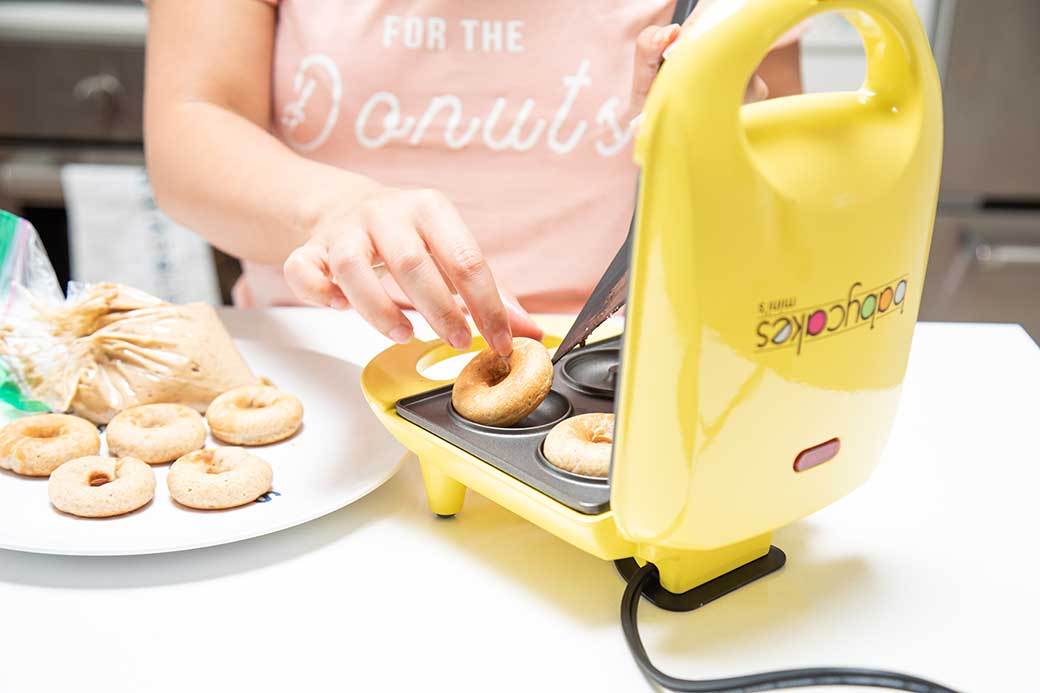 Create an assembly line to make your donuts so you can seamlessly decorate, fill, and add toppings to your treats.

Q. Can I use different types of batter, or do I have to stick to donut recipes?

A. Feel free to experiment with any batter recipe you find, though changing the batter could affect the baking time. For your first batch with a new recipe, make some extra batter so you can experiment with the time and make any necessary adjustments without ruining an entire batch.

Q. What should I use to clean the nonstick plates on my donut maker?

A. You can use a regular cloth or a special sponge that is safe for nonstick surfaces. You’ll also want to choose a mild dish soap because harsher ones can be too abrasive. For a definitive answer, refer to the owner’s manual for care and cleaning advice.

Q. Do I need to flip the donuts during baking?

A. Because donut makers are equipped with two cooking plates, you don’t have to flip the donuts during baking. Donuts bake evenly and with minimal supervision, so all you need to do is close the lid and wait for the signal that indicates the donuts are done. 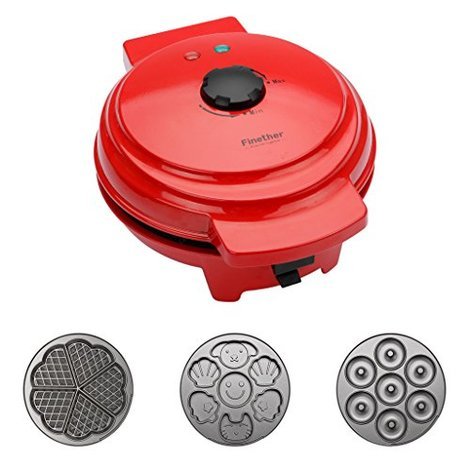 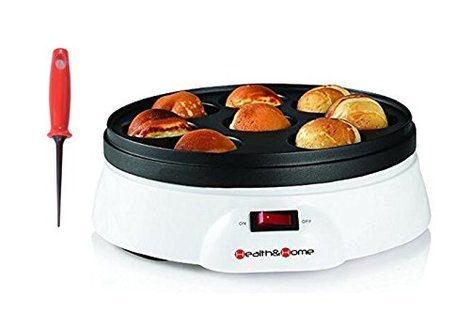 A superb option that allows you to instantly create donut holes, cake pops, and other delicious desserts. 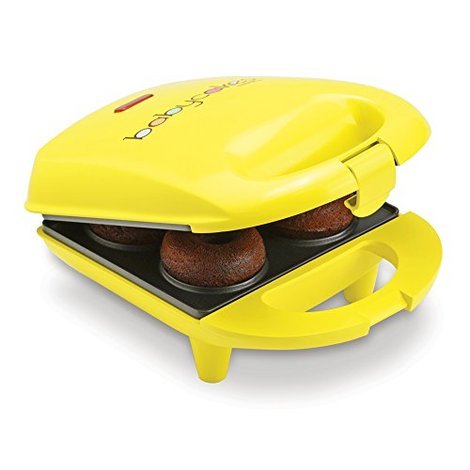 A compact and economical donut maker that enables you to create up to four mini donuts at the same time. 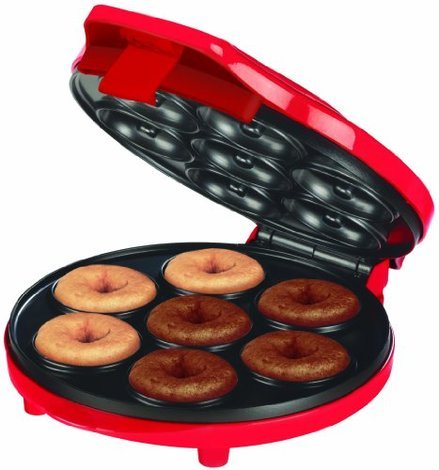 Quick-cook model that is affordable and maintains optimal temperature for consistently even baking. 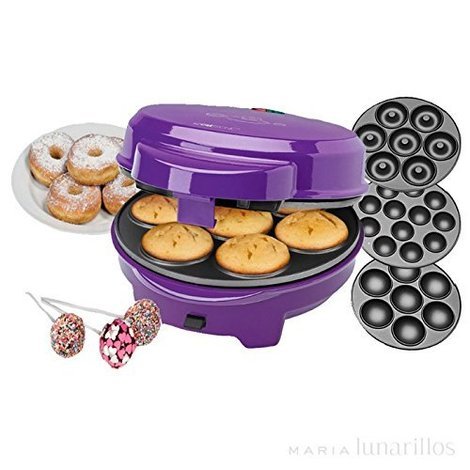 A convenient option for making mini donuts, brownies, whoopie pies, and other delectable pastries at home.