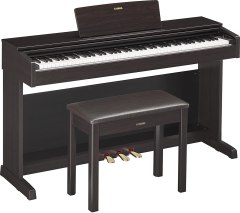 A beautiful digital keyboard with great features and a look, feel and sound that mimic an acoustic piano.

If you're just learning how to play, you'll truly appreciate this value-packed digital keyboard and its variety of educational features.

The keys certainly feel more like plastic than ivory.

This digital keyboard has an engaging sound, and its compact design makes it a good model for small spaces.

A little heavier than it looks.

With so many synthetic sounds at your fingertips, this is a fun model for experienced digital musicians to experiment with.

Does not include a keyboard stand.

Bring your keyboard into the spotlight with the durable, high-quality, and versatile AX-Edge keytar.

If you play with the AX-Edge for hours on end, you’ll feel the heft of those nine pounds.

Historically, there’s been a fairly big gap between traditional pianos and their electronic counterparts. Thankfully, times have changed, and many of today’s digital keyboards can hold their own against practically any set of keys, from a concert piano to a baby grand.

Digital keyboards also offer a lot of other advantages that modern players will love, like a line out for direct recording without a microphone, or the ability to adjust the sensitivity levels of the keys. There’s truly never been a better time to be a piano player — today’s digital keyboards offer the best of both worlds, so you can easily find one that sounds lush and professional while still being able to adapt to your personal playing style.

Whether you’re an accomplished pianist or you’re taking your first lessons, there’s a worthwhile digital keyboard for every skill level and budget. Here’s everything you need to know about digital keyboards: how to tell them apart, which features to hold out for, and how to find the one that’s perfect for your next performance.

Traditional or experimental use: you decide

When shopping for a digital keyboard, there are essentially two paths you can take.

Some people seek an instrument that duplicates the performance of a traditional keyboard, such as a piano or organ. Others seek a multifunctional synthesizer primarily for personal entertainment.

The idea is to match the user with the right type of instrument.

Modern digital synthesizers have removed much of the “work” from musical performance. Here are a few examples:

Other digital keyboards may not be as flashy or versatile as synthesizers, but they serve a different purpose.

Many music students do not enjoy easy access to traditional pianos or other keyboard instruments. One affordable solution is to purchase a digital keyboard that duplicates the action and touch of a real piano, including weighted keys and all three sustain pedals.

Traditional piano keys are mechanical levers. The performer depresses a key that engages an internal hinge and hammer. The hammer strikes the piano's tuned wires, creating a note. A cloth damper then presses on the string and ends the vibration. This design puts weight on the keys, and piano students eventually develop a performance technique based on that weight.

Touch sensitivity takes the concept of “action” one step further. A touch-sensitive keyboard allows the player to convey the emotion of the music by depressing keys with varying amounts of pressure and velocity. Many digital keyboards have special sensors that measure the amount of pressure and speed performers place on each key. A lighter touch often results in a softer tone, while a heavy or fast touch creates a louder note with a faster “attack.” This is a useful feature during performance, since part of what makes music interesting to the listener is a change in dynamics.

Did you know?
A keyboard is not designed to duplicate the mechanics of a saxophone or trumpet or strings. However, a keyboard with touch-sensitive keys is better able to allow a string section to build slowly or a trumpet to belt out quick, sharp notes.
STAFF
BestReviews

Some digital keyboard manufacturers like to pack as many additional features as possible into their high-end models, but shoppers should avoid the temptation to upgrade without cause.

There are additional features that enhance or improve performance, but there are also add-ons that casual users don’t need. Composers may want to create and store original tracks, for example, but most players, rehearsing the work of others, will not.

Below are some additional features student musicians and casual players should look for when shopping for a digital keyboard.

An important element of performance is the ability to sustain a note or chord for a long time or close it off immediately.

Traditional pianos accomplish this through the use of several foot-operated sustain pedals. These pedals move the dampening board closer or further from the piano's strings.

Many digital keyboards designed for rehearsal offer all three sustain pedals, but others offer only one pedal as an add-on feature.

Digital keyboards should have the capability to communicate with the outside world through external ports. The two most important features to look for are an external headphone/amplifier jack and a MIDI connector.

The onboard speakers on most digital keyboards, even on the higher end, can only produce a limited amount of sound, so the synthesizer needs the ability to connect with a mixing board or powered amplifier rated for keyboards.

One very useful addition, especially in terms of performance, is a pitch bend controller. Usually found on the left side of the keyboard, a pitch bend wheel is a spring-loaded switch that can “bend” a note several tones above or below its original setting.

Using a pitch bend wheel on an electronic keyboard often improves the authenticity of a voice’s sound.

A keyboard's polyphonic capacity reflects the number of pitches that can be held and/or sustained at the same time. Once a keyboard reaches its polyphonic maximum, the pitches begin to cancel each other out. In general, the higher the polyphony, the better.

Digital pianos range in price from hundreds to thousands of dollars. Higher-priced models claim to have better action and touch sensitivity and are targeted at serious and professional musicians.

Did you know?
Sometimes the difference between a $500 practice keyboard and a $1,500 digital piano is largely cosmetic. But other times, the differences really do affect performance quality.
STAFF
BestReviews

When used as an in-home rehearsal instrument or recreational synthesizer, volume is not usually a major consideration. The onboard speakers should deliver enough power to fill a small room with sound.

However, there are times when a home digital keyboard may have to fill some much larger shoes. Under these conditions, even the most expensive synthesizer speakers could be drowned out by other instruments or lost in the expanse of an auditorium. This calls for serious amplification.

Below are some ways to get it.

Use a wireless lavalier microphone

There are times when a wired instrument can be a safety hazard to others or a small sound system has no available channels. One low-tech solution is to attach a wireless lavalier microphone to one of the keyboard's external speakers and mix it into an existing channel with a wireless receiver. The keyboard and player can be positioned anywhere within the microphone's range, and the sound can be balanced through the mixing board.

Feed the keyboard into a mixing board or pre-amp

A safer solution for keyboard amplification is to plug the synthesizer into a mixing board first and then adjust the channel to the proper balance. This is a workable solution for church and performance halls where the player can hear other musicians and the keyboard through monitors or PA speakers. An experienced sound mixer should be able to monitor the keyboard's channel and keep everything in balance.

Plug into a powered bass or keyboard amplifier

It is important to remember that an electronic keyboard is a charged instrument, which means it already has electrical power running through it. An electric guitar, on the other hand, has no power of its own until it’s plugged into an amp

A charged instrument can easily overpower an amplifier designed for an electric guitar. A bass amplifier or a special keyboard amplifier is designed to handle a much more powerful load, so a keyboard player needs to make sure the keyboard's volume output is reduced to avoid a blow-out.

Pros and cons of digital keyboards

Digital keyboards run anywhere from less than $100 for an entry-level Casiotone to $3,000+ for a professional-grade Korg synthesizer. As such, it’s important for shoppers to understand the pros and the cons of digital keyboards at all price points. 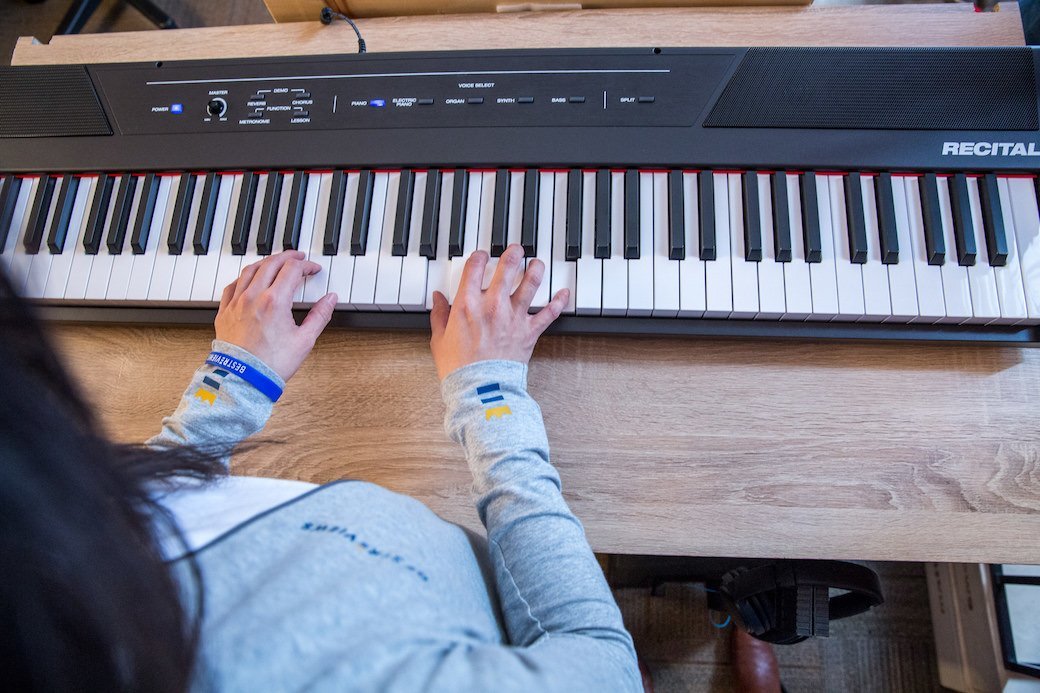 If you’re an adult looking to take beginning piano lessons, you can easily find age-appropriate material from the likes of Faber, Bastien, and other popular sheet music publishers.

Q. My son just started taking piano lessons. Do I need to buy a practice keyboard with 88 weighted keys?
A. Ordinarily, you would want to match the rehearsal instrument with the performance instrument as much as possible. If your son’s instructor uses a traditional piano with weighted keys, then investing in a similar digital keyboard would be ideal. However, these instruments can be very expensive. For the short term, a younger player just learning the fundamentals of music can practice scales and basic melodies on a smaller keyboard with fewer keys.

Q. How do digital keyboards duplicate the sounds of so many instruments so well? If I close my eyes, I swear there's a real sax player in the room.
A. Synthesizing authentic instrumental voices was a major problem with earlier generations of digital keyboards. The few voices featured on these instruments sounded very little like the real thing. But the invention of digital-sampling software revolutionized the industry. Sound engineers recorded real musicians performing on real instruments under laboratory conditions.

Q. Why does my new electronic keyboard sound so tinny? I like to play it for fun, but the sound isn't very good.
A. This is a common problem with entry-level digital keyboards. The low cost of a voice-sampling chip makes it possible for manufacturers to include hundreds of decent instrumental sounds, but the onboard speakers haven't been upgraded as well. The top synthesized sound generator is still going to sound tinny or distorted when played through a low-quality speaker.

The best solution is to look for an outgoing RCA or headphone jack and run the keyboard through an auxiliary input in a home stereo system or use a bass or keyboard amplifier. 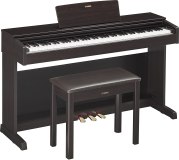