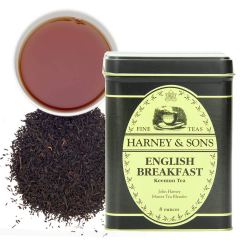 Tea that is best enjoyed in the mornings because of its mild fragrance and taste.

Is caffeinated and doesn’t need a long time to seep. Authentic Chinese Keemun tea that’s been satisfying generations since the 1800s.

Buyers thought it somewhat bland when seeped for directed amount of time. 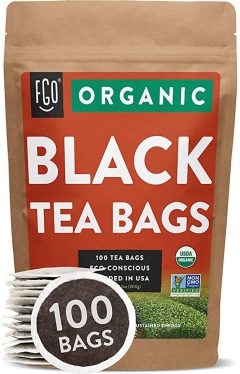 Certified organic black tea that is packaged in stringless, compost-friendly bags and made without additives.

Environmentally-friendly tea bags made with completely raw Chinese tea. Is offered in 20 or 100 count bags that come in a reusable Kraft Bag.

Customers wish tea was stronger and find themselves using 2 bags to get the flavoring they want. 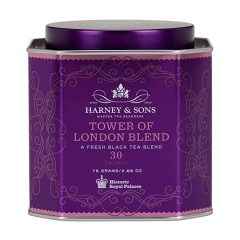 Comes in an appealing tin packaging with flavor-packed black tea that reflects on an older, classy London.

Certified Kosher tea that has hints of bergamot and honey oils combined with dried stone fruits. Is a wonderful gift idea for a tea enthusiast. 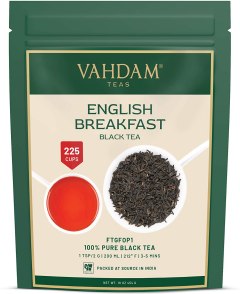 USDA-certified, organic, and non-GMO full-bodied tea with notes of bergamot, floral, and citrus.

Package quality has seemed to decrease, and flavor profile changes from bag to bag. 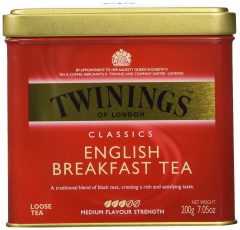 Excess steeping and ounces resulted in bitterness for some.

There are many reasons why tea is the second-most consumed beverage in the world, topped only by water. It tastes good, for starters, and there are many varieties to suit just about any palate. It has enough caffeine — the average eight-ounce cup of black tea has between 40 and 70 milligrams of caffeine, versus coffee’s 80 to 100 milligrams — to perk you up without giving you the jitters, and it even contains antioxidants that are good for your health.

While it’s true that the “best” black tea is somewhat subjective, it’s also true that the more you know about tea, including what to look for and the best way to brew it, the likelier it is that you’ll find just the tea to make your mornings or afternoons that much better.

Whether you like it plain, flavored, or even decaffeinated, you'll want the scoop on choosing, storing, and brewing the perfect cup of black tea. 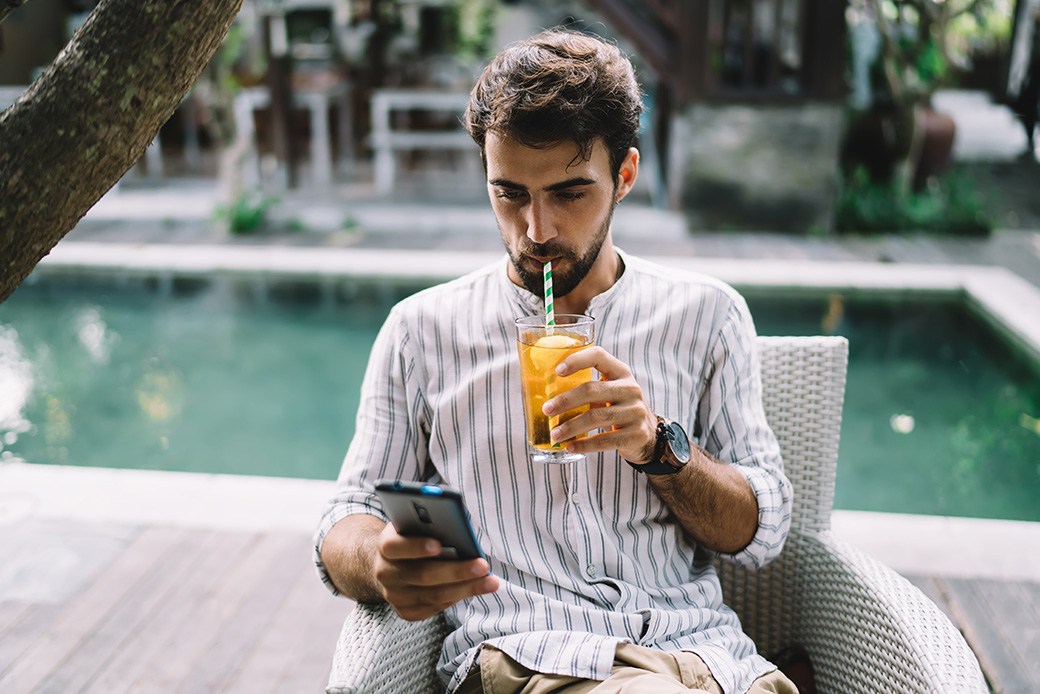 After water, tea is the most popular beverage in the world with a history stretching back more than 3,000 years.

How to buy the best black tea

It might seem like a simple question, but actually, there are a lot of beverages called “tea,” although technically, they are not. First of all, true tea only comes from the leaves of the Camellia sinensis plant, which is native to Southeast Asia but is now grown in many parts of the world, with China, India, Africa, South America, and Indonesia producing the majority of tea worldwide.

Because there are many cultivars of Camellia sinensis (thousands, in fact), there are many varieties of black tea, each with a slightly different flavor, which can range from strong and smoky to mild and smooth. Black tea isn’t the only drink that’s brewed from the leaves of Camellia sinensis: green tea, white tea, and oolong come from the same plant. The difference is how the leaves are treated after they’re harvested.

Herbal “teas,” such as peppermint, chamomile, and rosehip, are technically not teas at all. They’re herbal infusions or tisanes and are naturally caffeine-free. Other plant-based, caffeinated beverages often referred to as tea include yerba mate and rooibos, but neither are technically tea, as they are not from the Camellia sinensis plant.

You’ll find a wide range of black teas on your supermarket shelves and a huge selection at any tea specialist. While there are thousands of black teas to choose from, the following are some of the most popular.

Assam: Grown mostly in India, Assam black tea has a robust, malty flavor. Many drinkers like to add a bit of sugar or cream to this strong tea.

Darjeeling: Another tea mostly grown in India, Darjeeling generally has a milder flavor and lighter color than Assam. Its slightly fruity flavor is best without any added milk or sugar.

Ceylon: Grown mostly in Sri Lanka (once called Ceylon), these black teas tend to have strong flavor with a slight note of citrus or chocolate. This is another tea that does well with a bit of sugar, honey, milk, or cream.

Yunnan: This robust Chinese black variety brews a somewhat orange cup of tea with a smooth, malty flavor and slight undertones of chocolate or honey. Drink it plain or add a bit of sweetener.

Lapsang Souchong: Grown in the Wuyi Mountains of China, the leaves of this strong tea are dried over a pine fire, creating a smoky flavor that’s somewhat reminiscent of tobacco and pine. Sometimes called the “whiskey of tea,” this one is best with a little sweetener.

English Breakfast: This very popular breakfast tea is a blend of Assam, Ceylon, and Kenyan black teas, creating a pleasantly smooth, strong tea that’s delicious straight or with a little sugar and cream.

Chai: This fragrant and wonderfully spicy black tea drink originated in India. There are many versions, but typically, chai is Assam black tea leaves flavored with a blend of cinnamon, cloves, cardamom, ginger, and black pepper.

Earl Grey: The most popular flavored black tea in the west, Earl Grey is usually Assam or Darjeeling leaves flavored with bergamot, which is a type of citrus. There are quite a few variations of Earl Grey, including Lady Grey and Earl Green, which has green tea leaves instead of black. 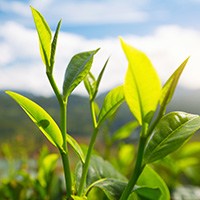 Did You Know?
All true tea comes from the leaves of the Camellia sinensis plant, which contains caffeine.
Staff
BestReviews

Tea bags are very convenient, but true tea purists prefer to brew loose-leaf tea, as loose tea generally consists of whole leaves or large pieces of leaf, whereas tea bags typically contain tea dust or very small bits of tea leaves. The larger the brewed leaf, the more essential oils and antioxidants infuse into the hot water, leading to a more flavorful and healthy cup of tea. However, brewing loose-leaf tea requires the use of an infuser to hold the leaves within the hot water.

If you prefer tea bags, look for higher-quality brands that bag the tea in a pyramid-shaped silk or fabric bag, rather than the common flat paper tea bags. Pyramid bags increase the water flow around the tea leaves, which in turn increases the tea’s flavor.

Many high-end brands of tea use organic tea leaves, which means the plants were grown without use of chemical or synthetic pesticides and fertilizers.

A fair-trade-certified product, including tea, means that the growers and pickers of the tea leaves were compensated fairly for their labor, their working conditions were safe, no child labor was involved, and sustainable farming practices were used to grow the tea plants.

If you love the taste of black tea but want to avoid caffeine, you can find many decaffeinated teas, including decaf English Breakfast and Earl Grey. Generally, either carbon dioxide or ethyl acetate is used to remove the caffeine, which can slightly alter the flavor of the tea. Note that decaf tea can still contain a trace amount of caffeine.

There are hundreds, perhaps thousands, of flavored black teas, including the highly popular Earl Grey. Some contain a single flavor, such as vanilla or lemon, and others have a blend of many flavors and spices. Chai is an example of a tea flavored with multiple spices. Flavored teas are especially nice as an afternoon pick-me-up. The best flavored black teas use natural (not artificial) flavors. 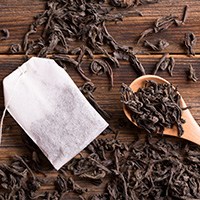 Did You Know?
There are many varieties of black tea, including Darjeeling, Assam, Ceylon, and Lapsang Souchong.
Staff
BestReviews

Black tea doesn't need to be expensive. You can find a box of 20 tea bags at the supermarket for less than $5.

Some exclusive or rare teas can cost well over $20 for a quarter-pound of loose tea. 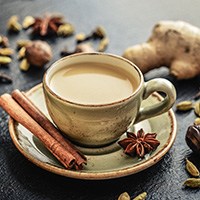 Did you Know?
Earl Grey and Chai are two of the most popular flavored black teas.
Staff
BestReviews

For the perfect cup of black tea, use the following guidelines. 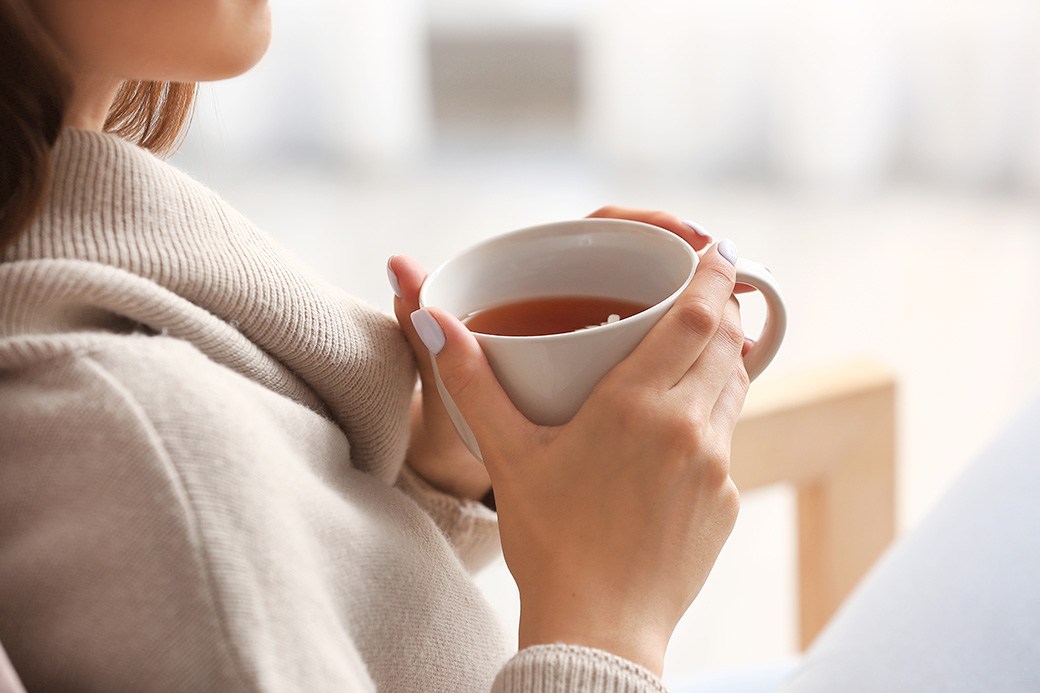 Q. How should I store my black tea?

A. Maintain your black tea’s flavor and freshness by always storing it in an airtight container away from excessive temperatures, moisture, and light. Never store tea in the refrigerator or freezer, as it will degrade the flavor, and keep your tea away from other foods or items with strong odors that might permeate the tea and alter its taste.

Q. What are the health benefits of drinking black tea?

A. Black tea contains a variety of compounds that may be good for your health. One such compound is theaflavins, which might lower cholesterol and blood sugar levels. Another is flavonoids, which also reduce “bad” LDL cholesterol, blood sugar, and triglycerides. Black tea may also increase the number of helpful bacteria in your gut, as well as lower your blood pressure. Plus, studies have shown reduced risk of stroke among tea drinkers.

Q. What about iced tea?

A. A cup of iced tea on a hot summer day is very refreshing. You can make iced tea quickly by brewing hot tea, allowing it to cool, and serving it over ice. For a stronger, more refreshing iced tea, pour cold water into a pitcher with one tea bag or a tablespoon of loose tea in an infuser for every 16 ounces of water, then refrigerate it overnight before removing the tea leaves and serving the drink over ice. 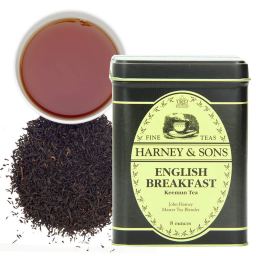 Best of the Best
Harney & Sons
English Breakfast Loose Leaf Black Tea
Bottom Line
Tea that is best enjoyed in the mornings because of its mild fragrance and taste.
Shop Now 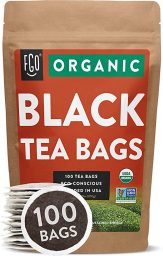 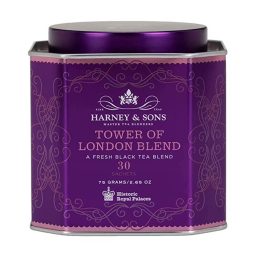 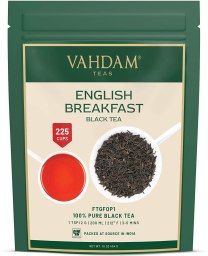 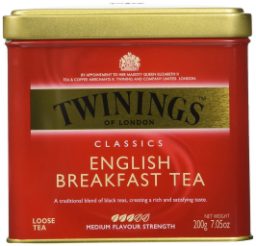 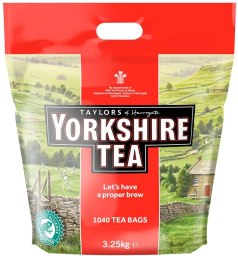 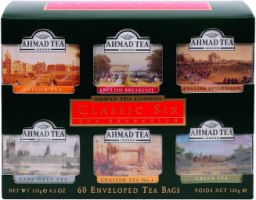