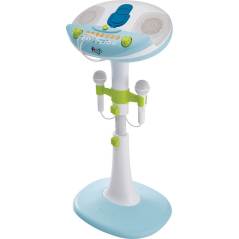 Place this karaoke machine on the ground or a tabletop and let your child show their full range of skills with a machine designed specifically for them.

Comes with fun voice effects to keep a child's attention. Also comes with memory so they can show off their artistic performance. Comes with 2 microphones, so your child can include a friend or family member for those songs that are just begging for a duet. Setting it up is incredibly easy.

Doesn't feature songs that are great for singalongs. Requires C batteries that don't come with the unit. 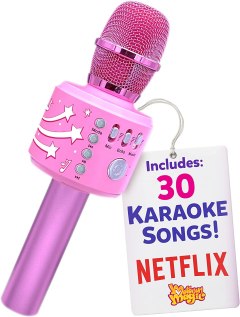 This microphone comes pre-packed with classic Motown hits for simple karaoke nights, but the Bluetooth connectivity gives you endless possibilities.

No included screen for lyrics. 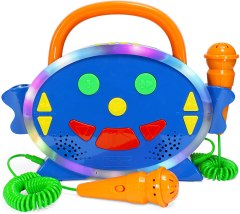 A simple karaoke machine that comes equipped with 100 kid-friendly nursery rhymes and tunes.

Not just for karaoke, kids will love the ability to record and playback their versions of songs. Flashing lights add a hint of showiness. Bluetooth microphones work with phones and tablets. Kids love the included voice changer that's pre-programmed with several hilarious effects.

Older children may prefer the other options. 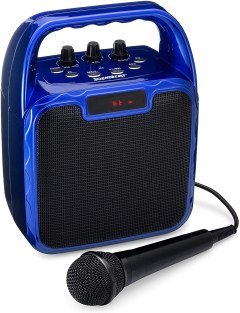 Kids can take their karaoke party anywhere with this highly portable machine. It doesn't play CDs, but it does stream music using Bluetooth.

Play background music using Bluetooth, USB, MicroSD, and auxiliary jack. Battery is rechargeable for portability. Comes with power adapter and a wired microphone with a 9.5-foot long cord. Jack available for second microphone. Also can work as a radio or speaker. 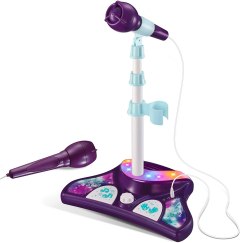 This kids karaoke machine is a good system for young children over the age of 3, as it is easy to use.

We like that this comes with 2 microphones, allowing your children to sing together. It also has an applause function and plenty of lights to make your child feel like a star.

Presents a choking hazard to children under age 2. It is also battery-operated, which limits its run time.

If your child can’t help but sing along with every song on the radio or television, a karaoke machine can make their dreams come true. Kids’ karaoke machines are designed to be easy to use and give kids the feel of performing.

Like many other children’s products, there are a lot of models on the market. If you’re not familiar with these machines, it can be hard to know what to look for. CD+G: what’s that? What about a microphone stand versus an all-in-one model? 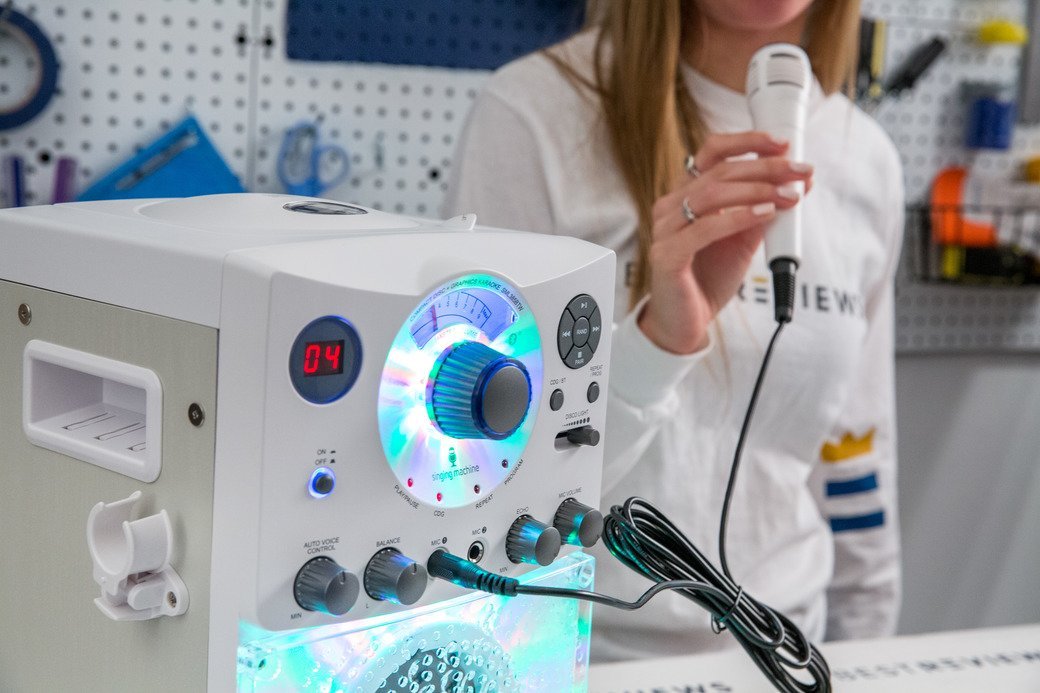 Kids’ karaoke machines come in a variety of themes, including Hello Kitty, Frozen, animal, bubble themes, and more. Don’t let the theme fool you – many of these machines have excellent durability and audio quality, too.

Types of karaoke machines for kids

Karaoke machines for kids are available in three basic types. The all-in-one karaoke machine is probably the type you’re most familiar with as it looks like a souped-up speaker with a microphone. These models may have a display, which doesn’t show lyrics, or a built-in screen, which does. Some models connect to a TV that displays lyrics, while others connect to a Bluetooth-enabled device like a smartphone or tablet on which lyrics are displayed. Some models connect to both.

Microphone stand karaoke machines mimic the sound equipment used by professionals. Some models have a control panel on the stand that allows your child to adjust the volume and choose the track. Other models are controlled via a Bluetooth connection to an app. A few stand models come with a set of pre-loaded songs. With others, you can download songs through the same app that controls the machine.

Corded machines rely on either an electrical or USB power cord. (USB cords are also used to connect to other devices and access songs.) Other models rely on batteries, some rechargeable and some not. A few karaoke machines can use either a cord or batteries for power. Battery-operated models offer better portability, but corded models usually have more features like tuning options and built-in screens.

The list of audio formats continues to grow, and you want to make sure the karaoke machine you choose is compatible with the most common types. Models with a CD player can play normal CDs and/or CD+G discs, which are compact discs plus graphics. CD+G discs do not play video but music and lyrics (graphics) that appear on a screen. They can also be played on a machine without a screen; you just won’t be able to see the lyrics. Karaoke machines for kids that play both types of discs offer more song variety.

Children’s products aren’t always known for their quality. And, we’ll admit, some inexpensive kids’ karaoke machines aren’t built to impress in terms of sound quality. However, mid-range and high-end children’s karaoke machines have impressive outputs that rival more expensive adult machines. If you want your child to be able to sing without distortion at high volumes, you’ll need to splurge on a machine with a good-sized speaker and audio control adjustments.

Karaoke machines with a built-in screen are often an excellent choice for children because everything you need is included in one unit. There’s no cord to find to connect a smartphone or tablet (although Bluetooth can eliminate this problem), and your child can look at the machine to read lyrics rather than at a separate screen.

All karaoke machines should come with at least one microphone, but those that include two are like gold for children. Kids love to sing with friends and siblings. With two microphones, what starts as a sing-along turns into a party. Check the machine’s specifications for two microphone jacks. Even if it only comes with one microphone, it may have two jacks.

Some karaoke machines offer more entertainment features than others. There are your basic audio adjustments like tone and bass, but some models also include voice changers, background singers, and other voice-modifying abilities. Extra audio adjustments can add hours of fun.

Karaoke machines with Bluetooth technology vastly increase song choice. Machines that are not Bluetooth-enabled may still connect to a smartphone or tablet via a USB cord, which will grant access to a wide variety of music. Models that don’t connect to any wireless device should have a port for (and hopefully come with) an RCA cord to connect to a television for displaying lyrics.

Before buying, be sure to check the operating system of the manufacturer’s app. Most machines are compatible with both Android and iOS operating systems, but there are a few that can only use one or the other.

Karaoke machines with easy-to-understand instructions and simple control panels allow kids to run the show. Younger children do better with CDs, but if your child is tech-savvy, she may be able to set up a Bluetooth connection without trouble. Your child’s age and capabilities will help you decide which machine will be easiest to use.

Let’s face it, kids love to listen to themselves. A built-in recorder lets them make their own tracks for playback. While some only record to the device, others can create an MP3 file that can be sent to grandma.

Kids’ karaoke machines start at around $20. These basic machines may only include a small set of pre-loaded songs without the option of adding more. A few machines can connect to a device to play MP3s. The models in this price range may be microphone stand machines or basic all-in-one models that lack a display screen.

Between $20 and $50, you’ll find all-in-one, stand-only, and microphone-only machines with good audio. These models may have a built-in recorder, LCD display, and extra audio control features.

In the $50 to $100 range are all-in-one machines with excellent sound, Bluetooth capability, USB ports, and multiple microphone jacks.

For over $100, you’re looking at machines with built-in screens, tablet and smartphone cradles, and disco lights. Older kids will love the extra audio adjustment features offered by these models. 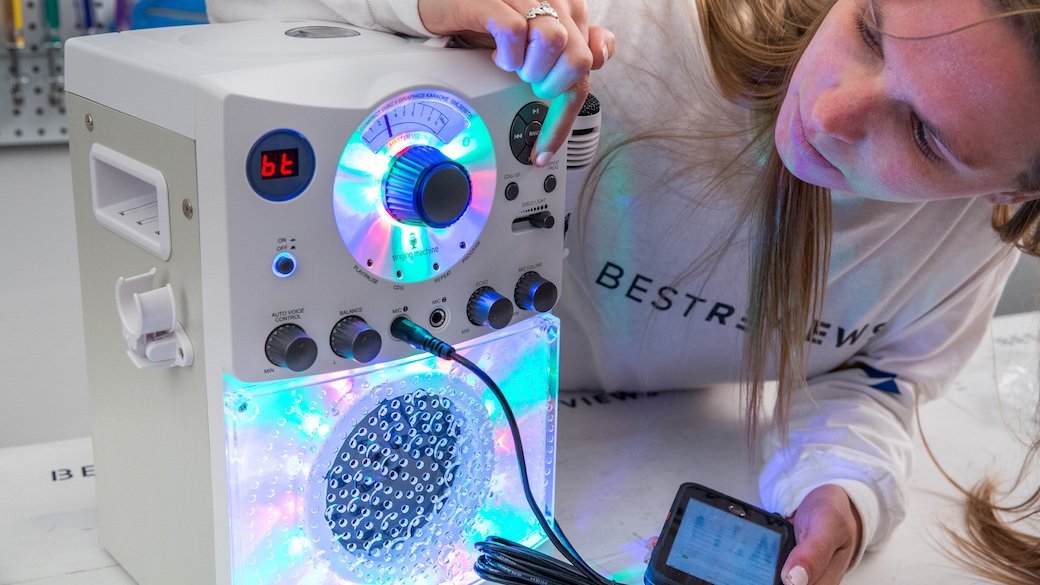 Little singers will love karaoke machines for kids with special effects. There are machines that blow bubbles or add drums and other background sounds to add to the performance.

Q. Can I record my child singing on a kids’ karaoke machine?

A. Many models include some kind of playback feature, though not all can create a sound file that can be saved to your phone or tablet. A model with built-in memory will let your child hear how she sounds. If the model you choose can’t create exportable sound files, you can always record the playback with your phone on a recorder or voice memory app.

Q. Can karaoke machines for kids connect to any karaoke app?

A. There are models that can play music from any karaoke app because once they connect to your smartphone or tablet, they can play any song on it. Other models can only connect to and play songs on the manufacturer's app.

Q. Do all-in-one karaoke machines for kids have a smartphone or tablet cradle?

A. Not all but many karaoke machines that don’t have a built-in screen have a cradle for a wireless device. Most cradles are at the top of the machine so your child can easily see the lyrics. A few models have two cradles, one for a smartphone and one for a tablet. 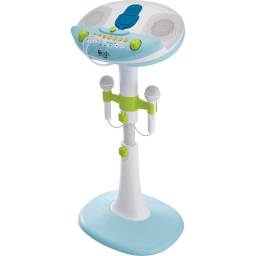 Best of the Best
Singing Machine Kids
Pedestal Kids' Karaoke System
Bottom Line
Place this karaoke machine on the ground or a tabletop and let your child show their full range of skills with a machine designed specifically for them.
Shop Now 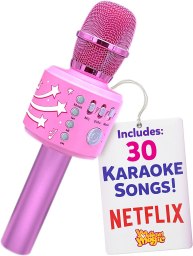 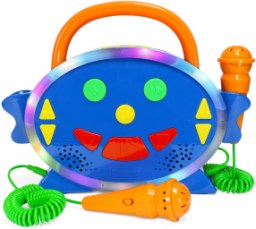 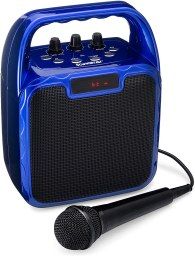 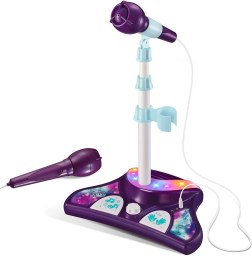 Top Pick
Little Pretender
L P Kids' Karaoke Machine
Bottom Line
This kids karaoke machine is a good system for young children over the age of 3, as it is easy to use.
Shop Now 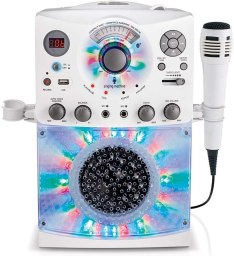 Top Pick
Singing Machine
CD+G and USB Karaoke Player
Bottom Line
This machine's disco lights get plenty of attention, but the real star is the Bluetooth connectivity, which gives you access to thousands of songs.
Shop Now 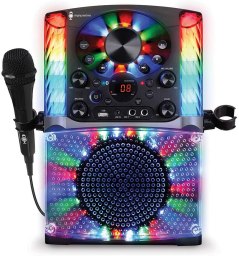 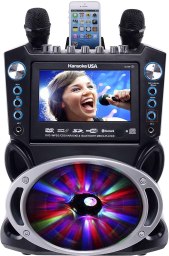