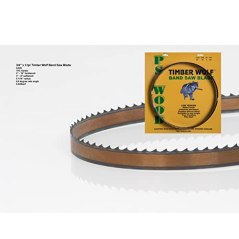 Band saw blade made from low-carbide steel to make for a durable cutting tool. 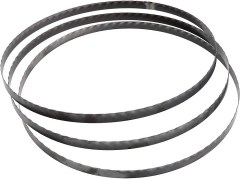 Prep for your project with a 3-pack of portable band saw blades.

This product received overwhelming positive reviews from purchasers, a very few complaints about the blades breaking easily, and not being able to cut through stainless steel. 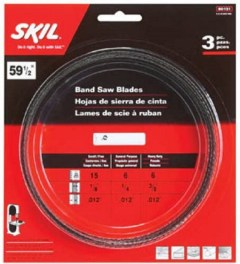 An assortment pack of band saw blades gives you the cutting power with optimized tooth geometry.

About 15-20% of purchasers thought the blades were too thin (too easily breakable) and/or not sharp enough.

Band saw blade made from premium grade steel and optimized tooth geometry for your toughest jobs.

64 1/2" by 1/2". Blade is made from premium grade steel to resist heat buildup, prolonging blade life. Optimized tooth geometry for best performance during cutting. Manufacturer states their saw blades are designed to fit most popular brand band saws, including 9" and 10" band saws.

Slightly over 15% of buyers were disappointed by the product, mainly because it didn't hold up to making cuts through metal. On the costlier end of price range. 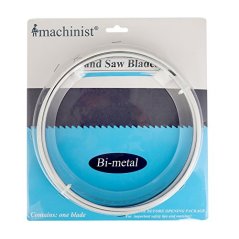 Not many complaints, but use on softer metals. Doesn't hold up well to stainless steel cutting, apparently.

Whether you own a wood- or metal-cutting band saw, choosing the best band saw blade for it can be a real challenge. At first glance, these seem to be fairly basic items: little more than a ribbon of steel with some jagged teeth. In fact, they come in a variety of lengths and widths, can be made from several different materials, have different tooth shapes, and can be capable of cutting wood, plastics, laminates, aluminum, steel, and even cast iron.

While a general-purpose band saw blade might seem the simple answer, and it can often be a cost-effective solution, it can also result in poor performance and disappointing results. Taking a few minutes to select the right blade for the job will increase both accuracy and productivity.

Fortunately, most of these blades are not expensive, so having a selection of three or four different sizes to choose from is a practical solution. 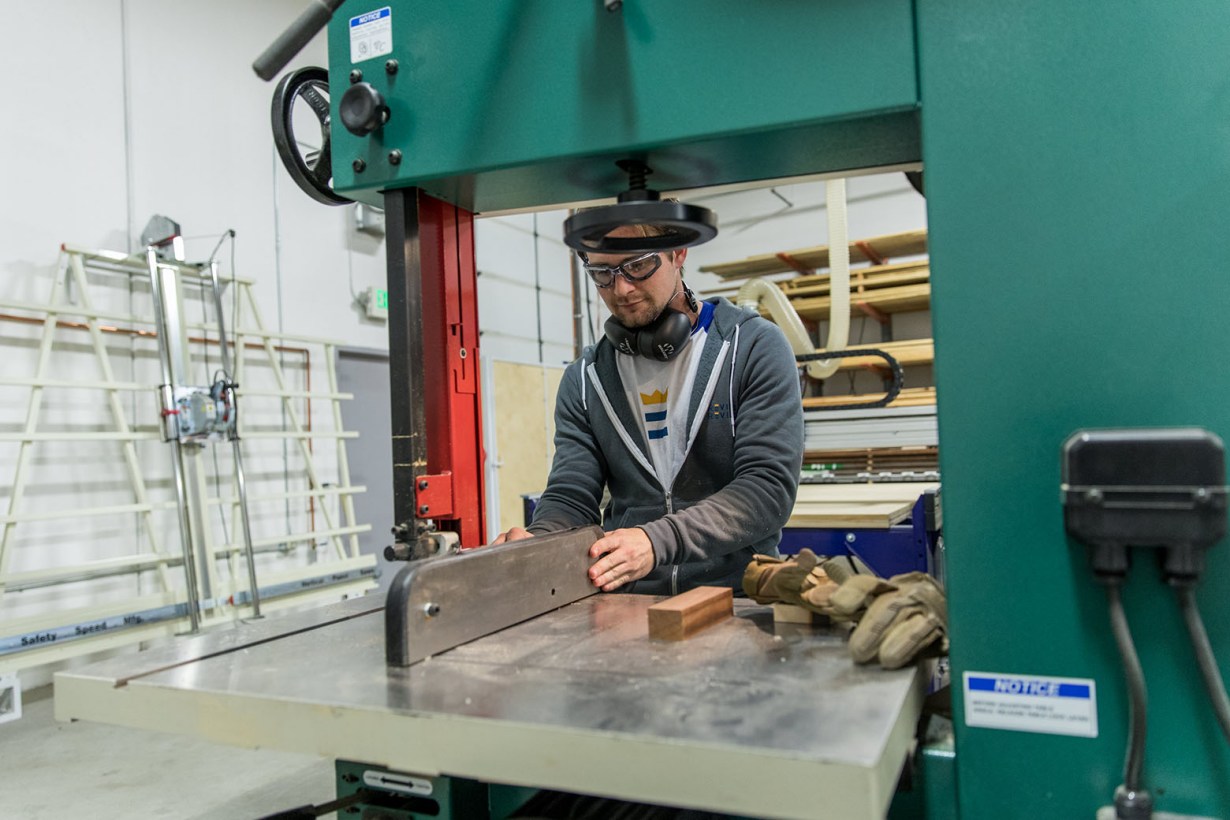 Always think of safety first. A band saw blade that can cut wood or metal will cause serious damage to fingers and hands.

How to buy the best band saw blades

Although wood-cutting band saws and metal-cutting band saws are quite different tools, the same general principles apply to choosing the best blades for both. However, while there is some overlap in blade materials, there are also clear differences.

Carbon steel: These blades (also called spring steel) are often what is supplied with a new wood-cutting band saw. They are inexpensive to make and can cut a wide variety of materials, including wood, plastics, fiberglass, brass, aluminum, and even thin steel. However, they do wear out relatively quickly, particularly when cutting metal.

Bimetal: As the name suggests, bimetal blades are made of two metals, usually carbon steel for the main body and high-speed steel (HSS) or cobalt steel for the teeth. The blades cost more, but the cutting edges are much harder and more durable. Bimetal blades can be found on both wood- and metal-cutting band saws.

Carbide-tipped: These blades usually have a carbon steel body with tungsten carbide powder bonded to the cutting edge. They often don’t have teeth. Tungsten carbide (or carbide) is a very hard compound that can cut through steel and cast iron. While mostly found on metal-cutting band saws, carbide blades can also cut concrete, ceramics, masonry, and stone. They’re also found on large logging band saws.

Diamond-tipped: These blades have industrial diamond grit bonded to the cutting edge, similar to carbide-tipped blades. The resulting blade can cut through just about anything, but the higher cost means they’re usually reserved for specialist processes like cutting quartz and glass. 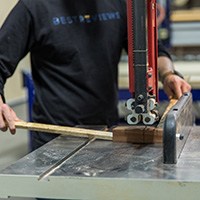 DID YOU KNOW?
An old pro tip says that a properly adjusted band saw blade should sound clear when plucked, just like a guitar string. If it sounds dull, either the tension is wrong or the blade may be damaged.
STAFF
BestReviews

Length: Every band saw requires a blade of a particular length. It’s a fixed dimension, and blades of the wrong length simply won’t fit.

Width: Band saws also have minimum and maximum blade widths. The narrowest is usually 1/8 inch, and few exceed 2 inches, though wider blades can be found on large industrial machinery.

However, narrow blades can make it difficult to cut straight lines, especially in thick material. If you want to take deep slices off a piece of wood (when cutting veneers, for example), a wider blade offers better straight-line control. There’s more metal in the blade and therefore more stiffness to support the cutting edge.

General guidelines say to use the widest blade possible for a particular job. The blade will cut straighter, be less prone to overheating, and last longer. Only use narrow blades when curves are required.

Thickness: The thickness of the steel used for the blade can also have an impact, though there isn’t a great deal of choice in this area unless the blades are custom-made.

TPI: This is teeth per inch. Usually, having more teeth per inch means a smoother cut but at a slower rate. For rough sawing of softwoods, you might use a blade of as low as 3 TPI. For general-purpose band sawing, 6 to 8 TPI is often recommended. For fine cutting or hardwoods, your choice would be 12 to 14 TPI. High TPI is also recommended for thin material. If there are too few teeth making contact with the material, the cut will be ragged.

Metal-cutting band saws have a comparatively higher tooth count. For soft metals like aluminum and brass, you might use a blade with 8 to 10 TPI, whereas for steel it could be 14 to 16 TPI. Once again, cutting thin material requires higher TPI, and when cutting sheet steel it could be over 20 TPI.

Normally, the wider the blade, the lower the TPI. For instance, you probably won’t find a 1-inch wood-cutting blade with more than 10 TPI. You’ll sometimes have to compromise between blade stiffness and cut quality. If a fine finish is required, maximize the number of teeth. If rapid sawing is more important, a wide blade with fewer teeth is the better choice.

Tooth shape is an often overlooked feature of band saw blades. It’s an area worth exploring, particularly if you cut a wide variety of materials.

How much do band saw blades cost?

The cheapest band saw blades are plain carbon steel, which is fine for high-productivity use when cutting softwoods. Depending on the size of the saw, these can start from well under $10.

Bimetal band saw blades for wood, plastics, and soft metals like aluminum or hard metals like steel cost around $15 to $30, though lower prices are available for those who buy blades in packs of five or more.

Commercial band saws often require longer and wider blades or carbide-tipped versions for heavy-duty metal cutting. These can be significantly more expensive, and it’s not unusual for them to cost $80 or more. 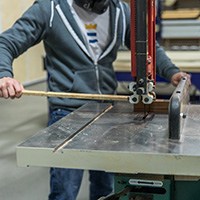 CAUTION
A band saw blade can get very hot during use, though it may not seem like it. Allow time for the blade to cool before adjusting or changing it or it could burn you.
STAFF
BestReviews

There are several ways you can prolong the life of your band saw blades and maintain their accuracy, as well as stay safe while using them. 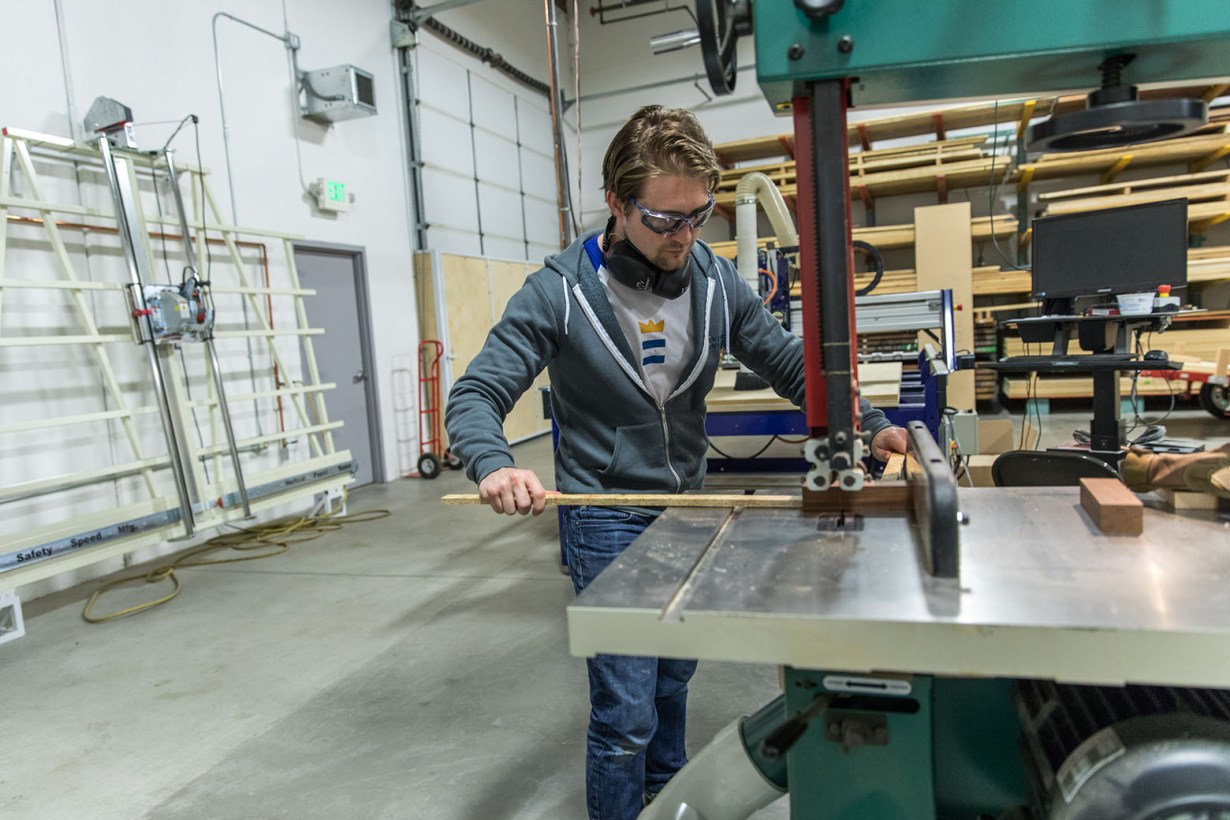 Give the blade a quick visual check before each work session. If you spot missing teeth or hairline fractures, change the blade immediately. Sudden breakage is rare, but it can be very dangerous.

A. Not necessarily. Generally speaking, higher TPI produces smoother cuts and is better for hard materials. However, the sawing is slower. For rough cutting of softwoods, for example, low TPI is better. Most band saw users have a selection of blades to suit different purposes.

Q. How long should a band saw blade last?

A. It’s difficult to say because it depends on how frequently it’s used and the materials it’s cutting. In a professional environment, a blade might only last a week. Hobby users should probably expect it to last at least a few months and perhaps up to a year.

Q. How do I sharpen a band saw blade?

A. You can use a small round file or a rotary tool with a carbide burr to regrind the edges of the teeth. However, this is very laborious and can only be done once or twice before the cutting edge is worn away. Given the relatively low cost of these blades, most people treat them as disposable. 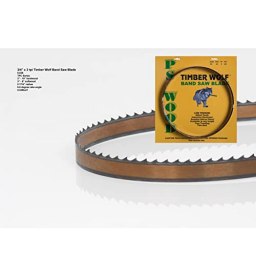 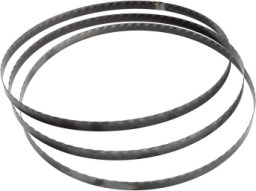 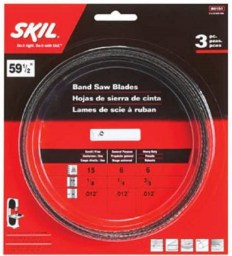 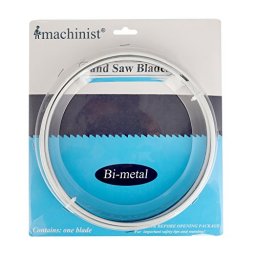