Reliable sandbags designed by a reputable company. It’s a premium purchase with reinforcement features; well worth the price.

Heavy-duty design with durable natural materials. Bags are double-stitched on the bottom and come with a pre-attached tie string, securing both areas. Delivered in sealed bag to prevent burlap from being exposed to moisture during shipping.

Some complaints about the porous design. Inconsistent packaging for correct number of bags.

Affordable heavy-duty bags ideal for salvage sites; a useful tool against flood protection. Can also be used for sandbag training.

Features a double-sewn bottom for extra strength. Heavy-duty 850 denier count material with UV protection for up to 1,600 hours. The hemmed top makes these easy to fill. Provides excellent value for money.

Some users report these degrade too quickly.

Rugged sandbags made from heavy-duty polypropylene material. UV protected for outdoor use.

Can take a load of up to 50 lb. Made from a heavy-duty polypropylene material with thick weaves. Photodegradable UV protection means these bags will last up to 1,600 hours before degrading.

An affordable line of sandbags that perform well. Solid construction thanks to special weaving process.

Features double-chain stitching, so bags are strong enough to hold up to 50 lb. of sand. Sturdy and durable with a tensile strength of at least 30lb. Equipped with UV inhibitor to withstand direct sun exposure up to 6 months.

Some reports of ripping after a couple days of use and a flimsy pre-attached string that shreds the bag when closing it.

If you live near the water or in a flood zone, you’re well aware of the importance of having sandbags. They’re designed with durability in mind, as their weather-resistance is a priority. Sandbags are made from tough materials that can withstand up to several months of direct sunlight. When stacked together, they form an almost impenetrable wall against incoming water. Home is where the heart is, which is why sandbags are an essential investment if you’re in a vulnerable area.

In addition to flood protection, sandbags can also be helpful in fitness and home improvement projects. Their durability is complemented by versatility, so you can train hard with sandbags, or you can use them to secure lightweight items in your backyard. Considering the list of possible uses for sandbags, it’s a good idea to have some in your home just in case a need arises.

We assembled this definitive guide to sandbags so you can choose the right ones to handle your household or training needs. 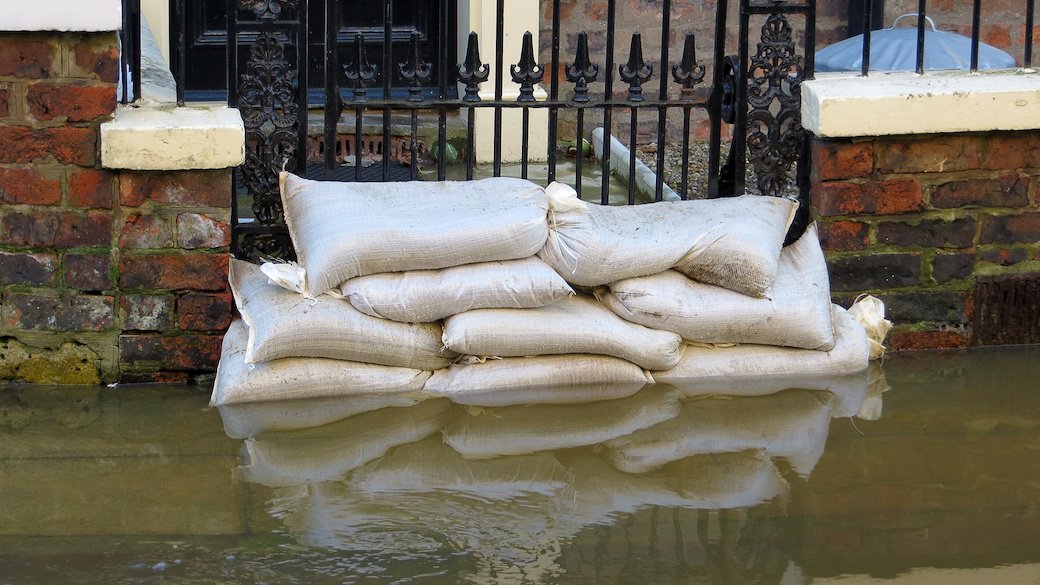 If you’re building a flood wall with sandbags, keep in mind that some stacking styles are more effective than others. A deciding factor in stacking style is your intended height. The higher the wall, the more reinforcement it needs.

How can I use sandbags?

There is a degree of uniformity when it comes to sandbags. For the most part, the common size is 14” by 26”, though some manufacturers make an assortment of larger sizes. If you think 14” by 26” doesn’t sound big enough, keep in mind you’ll be carrying these bags, and they are filled with quite a bit of weight. The standard size is the most manageable for one person to handle, especially if the sandbag is filled to capacity.

When it comes to 14” by 26” sandbags, you can expect them to hold up to 50 pounds of sand. You could fill them with less sand depending on your needs, but keep in mind you’ll need to close off the bag closer to where the sand is. If you try to seal an under-filled bag at the same place on top, the sand will move around and won’t centralize its weight — which defeats the whole purpose of a sandbag.

Many polypropylene sandbags are engineered to have UV inhibitors, which means they’re treated with chemicals that prevent them from deteriorating in direct sunlight. On average, these sandbags can last up to six months in direct sunlight before their integrity is compromised. After that, you’ll need to change out your sandbags or get rid of them. (Hopefully, you won’t need them after that amount of time.)

For your safety
Sandbags are heavy, so it’s important to lift them using strength from your legs and not your back. Proper lifting techniques will reduce the likelihood of injuries. If you are using sandbags larger than the common 14” by 26” size, you may want to ask a second person for help.
STAFF
BestReviews

Sandbags require tight, secure closures so sand doesn’t leak from them. It’s especially important when you’re stacking the bags on their sides, as an under-secured bag could simply open and pour out. Some sandbags come with closures, which could be packaged in a separate bag or sewn into the bag in a drawstring style. There’s usually a great deal of string, as it’s intended to be wrapped multiple times for a proper seal.

We compared the price of sandbags in 10-count packages and found that they cost between $10 and $30.

At the low end, between $10 and $12, you’ll find polypropylene sandbags which sometimes come with their own tie strings.

Mid-range sandbags cost between $13 and $15 and occasionally come in more than one color.

At the top of the range, generally closer to the $30 mark, are burlap sandbags that feature additional security stitching and could be filled with contents other than sand, such as gravel or stones.

We also like Greenstar Military Sandbags. It’s no surprise their strength and durability are among the best. These sandbags use the highest-quality polypropylene available. They’re especially tough and can withstand up to nearly 2,000 hours of UV exposure, which is between six to nine months. You won’t have to worry about sand leaking or the bag bursting thanks to a reinforced drawstring closure. The stitching is equally strong. These bags can hold over 50 pounds of sand.

In the event you need sandbags in an assortment of colors, the SGT Knots Poly Sandbags come in three colors: white, green, and orange. These sandbangs are appropriate for all weather conditions with tightly woven polyester that keeps out moisture, chemicals, and UV rays. The veteran-owned company that makes them has a great reputation, too.

If you’re making sandbags for fitness training, fill multiple bags at once, all with different weights. You’ll have a full-scale “weight rack” of sandbags. There will be enough variety to challenge yourself when you’re ready to take on more weight.

Q. I’m unable to weigh the sand for my sandbags, so how will I know when I’ve reached 50 pounds?

A. Load up your sandbag between half and two-thirds full. This amount generally hovers in the the 40-pound or 50-pound range. If you try to fill it to the top, the sandbag won’t be able to close properly and could be at risk for leaking or bursting.

Q. If the tie rope included with my sandbags is too flimsy, what could I use instead?

A. You could purchase a better grade of polypropylene rope. There are variations in thickness, so to avoid breaking the rope when tying it, opt for one on the thicker side. Alternatively, you could try doubling up thinner rope.

Q. How many sandbags do I need to protect my garage/door/home against flood or rain?

A. To determine this, you’ll need the exact measurement of the perimeter of the area. Once you have that, you also need to anticipate how high you need to build the wall. There are various equations available online to help you calculate your measurements and any variables. If you’re concerned about getting the right number of sandbags, talk to your local department of emergency management. They are equipped to make recommendations, especially if you’re in a flood zone.