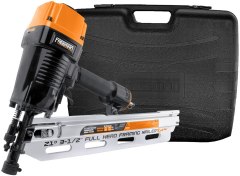 Versatile nailer that has the best performance. Offers a nice collection of useful features.

Will accept nails between 2 and 3.5 inches in length. Includes an anti-dry fire mechanism. Offers a no-mar tip to prevent damage to the surface of the material. Adjustable air exhaust direction. Good value with a high performance level.

Some problems with nails jamming inside the machine. Setting nail depth can be a challenge. 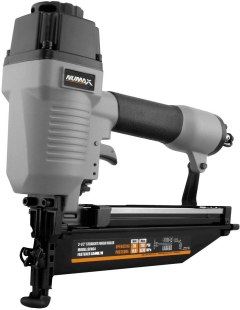 Reliable performance in a low-priced nailer. Can only use smaller finish nails, but does this well.

Extremely low price. Able to drive nails ranging in length from 1 to 2.5 inches. Aimed more at home users than contractors. Includes no-mar tip. Can adjust the direction of the exhaust so it doesn't blow the air back into your face.

Limited to 16 gauge straight finish nails. Some problems with nails jamming inside machine. 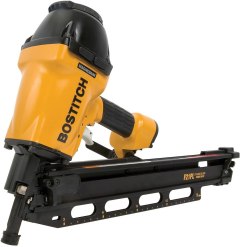 Excellent nailer from a trusted brand name. Powerful unit offers plenty of versatility for many jobs.

Unit weighs less than you'd think at 8 lbs., making it comfortable to use for long periods. 2-in-1 machine accepts framing nails ranging between 2 and 3.5 inches in length and metal connector nails from 1.5 to 2.5 inches. Powerful. 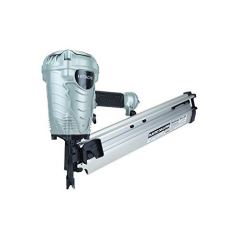 High quality product from a solid manufacturer. Easy to use unit for at-home use or contractors.

Easy depth adjustment for countersinking or flush finish. Only minimal maintenance required. Can use nails between 2 and 3.5 inches in length. Weighs only 7.5 lbs., weight balanced well throughout the tool for smooth performance.

Above average price point in framing nailer market. Questions regarding longevity of tool. 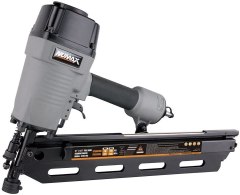 Good collection of features in a reasonably priced nailer, but doesn't have the longevity of other models.

Includes anti-dry fire mechanism. Accepts nails ranging in size from 2 to 3.5 inches in length. No-mar tip protects surface. Can adjust direction of air exhaust. Good power tool for those who need basic features for at-home use or who don't have much experience with nailers.

Model may begin to leak air near the trigger over time, causing the nailer to stop working properly.

A framing nailer is the epitome of a power tool. It combines fast performance with power, and it can drive several dozen nails in no time flat.

If you’re looking to connect two-by-four wood studs or other large pieces of wood, a framing nailer could be right for you. Bear in mind that framing nailers deserve the utmost respect for the power they deliver. Every time you pick up a framing nailer, work carefully and keep safety your top priority.

If you’re looking to buy a framing nailer, the following BestReviews shopping guide will enhance your understanding of framing nailers, and the product choices we've included here will help you make a wise purchasing decision. 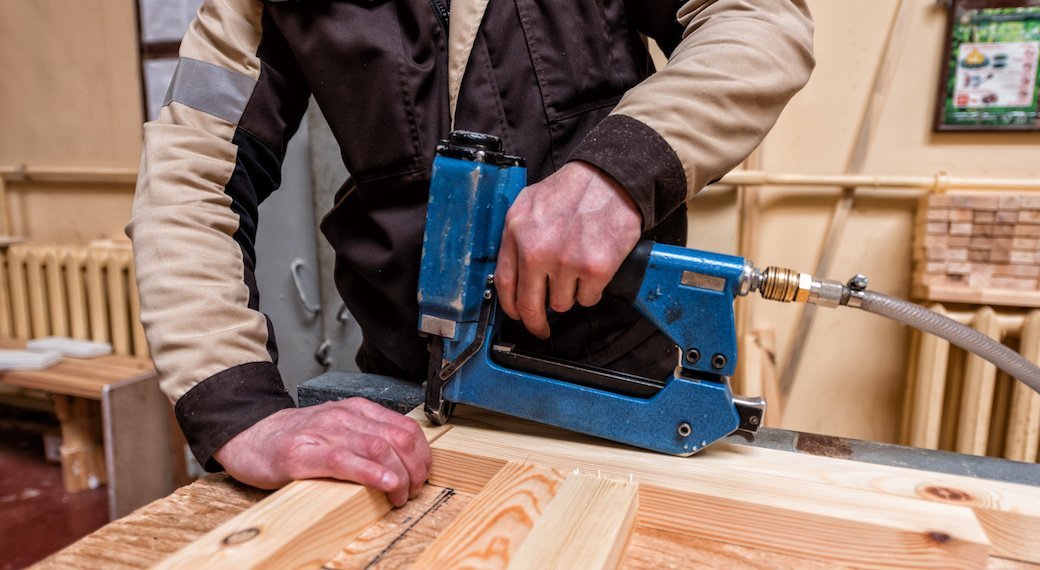 A high-quality framing nailer should allow you to adjust the depth of each nail strike.

What is a framing nailer?

A framing nailer is a type of nail gun that drives large nails quickly. If you need to create a frame for a room before hanging drywall, for example, a framing nailer can help you make fast work of it. Framing nailers are also great for building decks, creating wood fences, and installing sub-flooring.

If you’re faced with a woodworking job that requires power over precision, a framing nailer is likely the right tool. Framing nailers bind big pieces of wood together with large nails.

If you’re doing more precise or delicate woodworking, such as hanging door trim or assembling furniture, you would probably not use a framing nailer. Instead, you would use a brad nailer or a finishing nailer. These types of nailers use thinner nails that work better on thin pieces of wood.

When selecting a framing nailer, you will need to decide how you want to load nails into the nailer’s magazine. There are two options.

A framing nailer with a coil-style magazine uses strings of nails that are connected with wires. You load the coil nails into the round magazine attached to the nail gun. The nailer removes the connecting wire as it drives each nail.

A framing nailer with a strip-style rail uses nails that ship in a long, flat strip. Paper or glue holds these nails together.

The strip-style framing nailer has a long rail that extends from the nail gun. You load the strips into the rail. The rail then feeds the nails into the framing nailer, which separates them before ejecting a nail.

Because of the length of the rail, it can be awkward to use this type of nailer in tight spaces. The strip-style framing nailer does usually weigh less than a coil style nailer, though.

Most framing nailers can go back and forth between two firing options: bump firing and sequential firing.

Bump firing allows you to quickly drive nails. To fire in this manner, you depress the trigger and continuously press the nose tip to the wood to eject nails. It takes some practice to use the bump-firing method properly. The method can be dangerous because a framing nailer is tougher to control when you’re going fast. If you were to have a misfire when using the bump method, you could injure yourself.

Sequential firing is a slower process than bump firing, although it can still be faster than using a hammer. It’s a great method for beginners who want to carefully position each nail strike and are concerned about safety.

Expensive framing nailers tend to have more features than basic units. Here’s a general look at what you can expect for various prices.

Most homeowners can get many years of satisfactory use out of a mid-priced framing nailer. The tool won’t have the versatility of a high-end nailer, nor will it have extra features aimed primarily at professionals. However, it should be able to adequately handle most jobs.

The best framing nailers cost upwards of $150. For the higher price, you get a nail gun with lots of power and few misfires. If you’re interested in a high-end cordless framing nailer, expect to pay $300 or more. 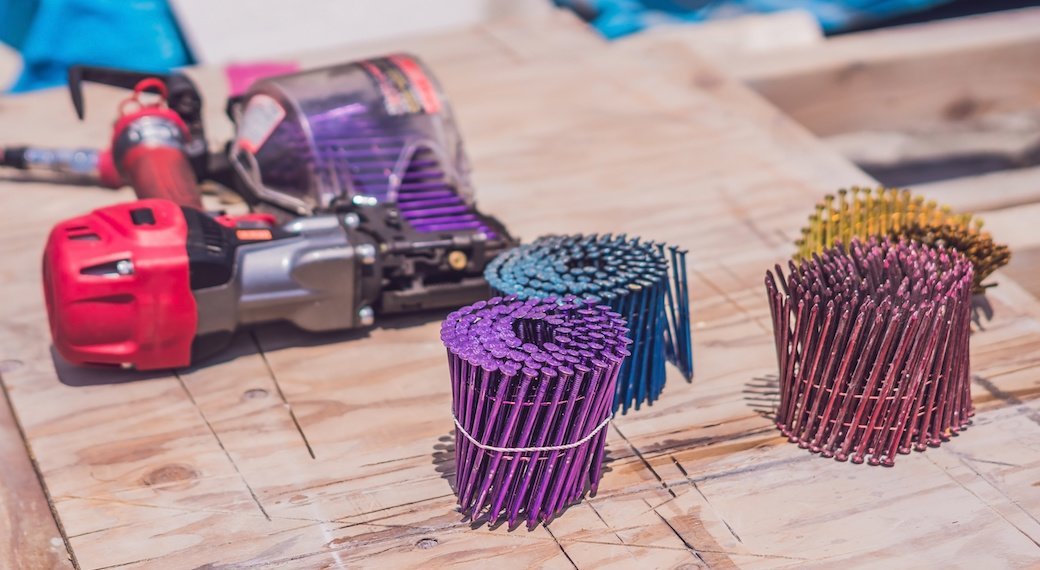 Some framing nailers are more versatile than others. If you want a framing nailer that you can use in multiple scenarios, look for one that can handle many different nail lengths.

Q. Do I need a special framing nailer for toe nailing?

A. A framing nail gun should be able to perform both perpendicular and toe nailing without any adjustment to the power tool on your part. However, you should be aware of one difference. When driving the nail perpendicular (or square) to the face of the wood, you can accurately set the depth of the nail. But when toe nailing, which involves driving the nail at an angle to the face of the wood, you cannot control the nail depth as easily.

Q. What can I do to reduce nail jams?

A. A high-quality framing nail gun will have fewer nail jams than a cheaply made framing nailer. But unfortunately, even the best nailer will have an occasional nail jam. Nail jams are more likely to occur with poorly manufactured nails. They may also occur if you’re working too fast and the nailer cannot keep up.

Always follow the safety recommendations on your framing nailer when trying to clear a jam.

Q. Can I use my current air compressor with a new pneumatic framing nailer?

A. You can probably continue to use your current air compressor. To be certain, however, you can check the specifications on the framing nailer to see what PSI (pounds per square inch) and CFM (cubic feet per minute) ratings it requires for operation. If your current air compressor can at least match those ratings, the two should work well together.

Q. What safety gear should I wear when using a framing nailer?

A. A framing nailer can deliver power that approximates that of a firearm, so safety gear is important. At the very least, you will want ANSI Z87.1 protective safety glasses, as framing nailers can cause debris to fly. Hard hats and ear plugs are recommended as well.

If you’re working at a job site, your employer may have certain gear requirements to match OSHA safety standards for nail guns. 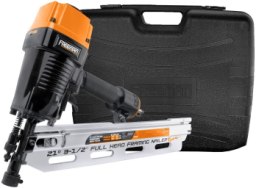 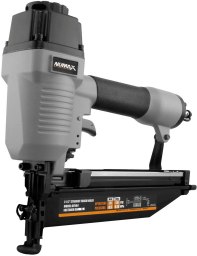 Best Bang for the Buck
NuMax
Straight Nailer, 16 Gauge
Bottom Line
Reliable performance in a low-priced nailer. Can only use smaller finish nails, but does this well.
Shop Now 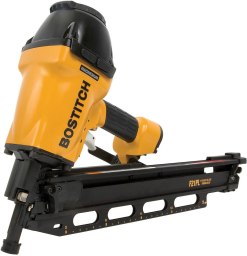 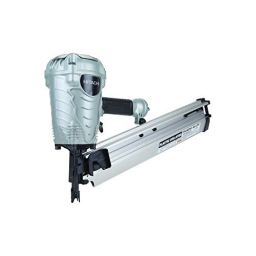 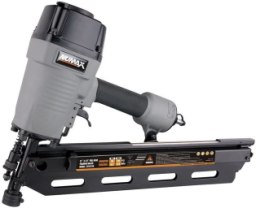 Top Pick
NuMax
21-Degree Nailer
Bottom Line
Good collection of features in a reasonably priced nailer, but doesn't have the longevity of other models.
Shop Now