A multifunctional camera with easy data transfer and a larger screen.

A combination of thermal and digital cameras and flashlight. Compact enough to fit in a pocket. Has a 3.5-inch display with a 19,200-pixel resolution. Detects between -4 and 752 degrees. Uses WiFi, Bluetooth, FLIR Ignite cloud, and USB-C.

May have various glitches. Screen is a bit small and doesn't have the best resolution. 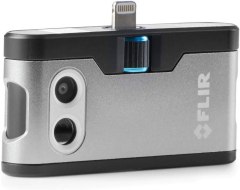 An easy-to-use iPhone or iPad attachment with sharing capabilities.

Lightweight and small. Plugs right into an iPhone or iPad and turns the device camera into a thermal infrared camera. Includes FLIR One app for support and sharing. Can connect to Apple or Android watches. 150 mK thermal sensitivity.

Only works with Apple devices with the lightning input. 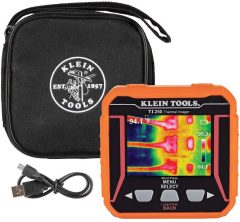 A small but powerful thermal imager with temperature alarms.

Has 10,000 pixels and emissivity between 0.10 and 0.99. Accepts microSD cards for saving and sharing pictures. Temperature alarms between -4 and 752 degrees. Offers 3 color palettes. Includes rechargeable battery, USB cord, and case.

Screen is smaller than those on other options. 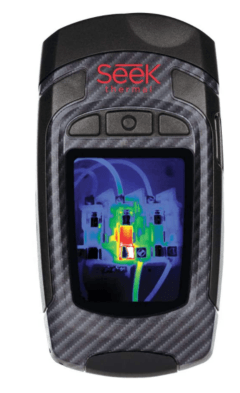 A solid piece of equipment with enhanced resolution.

Designed to withstand rough use. Offers 320 x 240 thermal sensor and 300-lumen flashlight. Charges quickly and the battery lasts a decent amount of time. Detects temperatures between -4 and 626 degrees from up to 500 feet away.

Hard to tell the actual temperatures of surfaces. 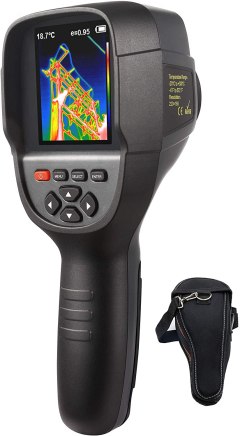 A model that works in many applications and has good performance.

Has thermal detection and shows visible light with a 220 x 160 resolution. Rechargeable battery. Built-in 3G memory card. Can detect water leaks in the walls. Good for everyday use. Comes with a travel bag, strap, and USB cord.

Can only measure thermal differences. If none exist, it cannot detect an image.

Using a standard digital camera or a smartphone is a common way to take photographs. After all, nearly 100 million photos and videos are shared on Instagram alone per day. But there are times when these cameras can’t deliver the information or capture the image you need. For example, when you need to measure temperature differences between objects in an area, only a thermal camera will do.

Thermal cameras can help you see things that aren’t possible to see in the visible light spectrum. They’re great around the house for spotting poorly insulated areas. They work nicely for security purposes. They also help you spot animals that may be on your property at night. But the choices out there can be overwhelming on this oft-misunderstood camera.

Read on to find out all about thermal cameras, then check out our top picks when you’re ready to buy one. 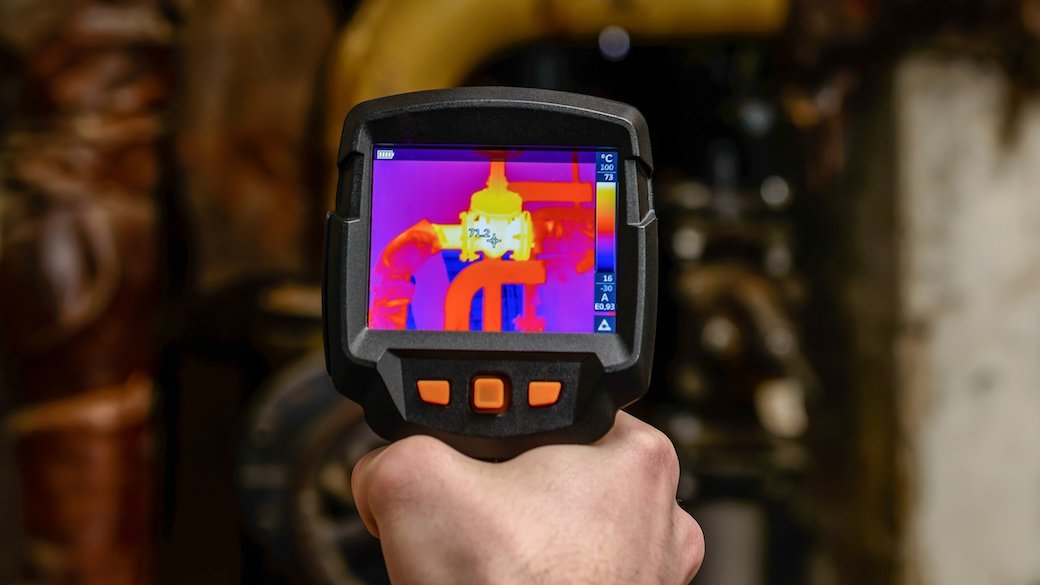 Thermal imaging is a useful tool when trying to view objects during night time, when visible light is limited or not available.

A thermal imaging camera measures the thermal heat of a person or an object in the area. It then displays an image on a screen that shows the difference between the thermal energy all objects in the scene are emitting.

Instead of an image sensor that measures visible light, as is found in a standard camera, the thermal camera uses an infrared image sensor. This allows it to measure temperature differences.

Through these temperature differences, the camera’s software is able to create an image on the screen. If a person is in the scene, the camera will create a picture that resembles a silhouette of the individual. You won’t see clear facial features or the color of their clothing, but the person’s outline will be visible and easily identifiable.

For simple thermal cameras, the image is shown on the screen for immediate consideration. For example, if you’re trying to find a leak around a window, the thermal camera simply shows you the approximate location.

For more complex needs, some high-end cameras will save their data, allowing you to run it through software later. This method provides exact measurements, data tracking, and locations of items in the scene.

Thermal cameras have a few features that are common on every model. But there are some key differences that will help you find the perfect model for your needs.

Thermal cameras don’t really look like visible light cameras, such as a DSLR. Many thermal camera bodies are similar to the handle part of a cordless drill with the camera at the top. You hold the handle and pull a trigger to start recording the image. It’s displayed on a screen at the back of the camera.

Some thermal cameras have a design more like a smartphone. This allows the unit to have a larger and sharper display screen.

Another popular option is a thermal camera that attaches to a smartphone or a tablet’s input port. You then can view the thermal image directly on the mobile device’s screen.

Some thermal cameras are simple units that only measure the current heat signature of objects. They don’t store data. But more advanced models may take continuous measurements of a scene, storing the data. They then can provide you with the high, low, and average temperatures of different objects in the scene over a set period of time. This feature can help you determine if a certain part in a device is overheating regularly. Advanced thermal cameras may even allow you to set an alert when any part of the scene exceeds a certain temperature.

The resolution of a thermal camera’s display screen can play an important role in your enjoyment of the system.

Larger screens with high amounts of resolution allow you to receive a clear picture of the scene. This makes it easier to identify shapes you’re seeing on the screen or to pinpoint the source of a problem.

Lower resolution small screens are found on inexpensive units. These cameras give you a general idea about temperature differences that exist in the scene, but the images are not sharp. If you’re just looking for a draft around a door or window, a low resolution camera may be enough.

Prices for thermal cameras vary widely. You can end up spending a lot on a thermal camera, especially if you have specific high-end needs.

Typically, expensive models will have features that only professionals will want or can use. Someone seeking a thermal camera for home use can expect to pay less than $750, and often quite a bit less than that.

Thermal imaging cameras are fun to have around, but they also can provide some important functions. Here are some ideas to help you make the most of your thermal camera purchase.

Quite a few different thermal cameras are available – more than we can include in our top five. Here are some other cameras you may want to consider. The Perfect Prime IR0018 Thermal Imager Camera has a high level of resolution, which helps identify objects on the screen. It has a handy one-handed operation design, too. If you prefer a unit with a design more like a smartphone, the Perfect Prime IR0005 Thermal Camera is a nice option. It also has a high level of resolution and can switch between thermal and visible light imaging. For iPhone users, you can add thermal imaging capabilities with the FLIR ONE attachment. This unit slides into the iPhone or iPad’s power port, providing thermal images on the screen. Finally, the Fluke VT04A Thermal Camera has an interesting feature. It allows you to overlay a thermal heat map over a visible light image, merging the two so you specifically can identify problem areas. 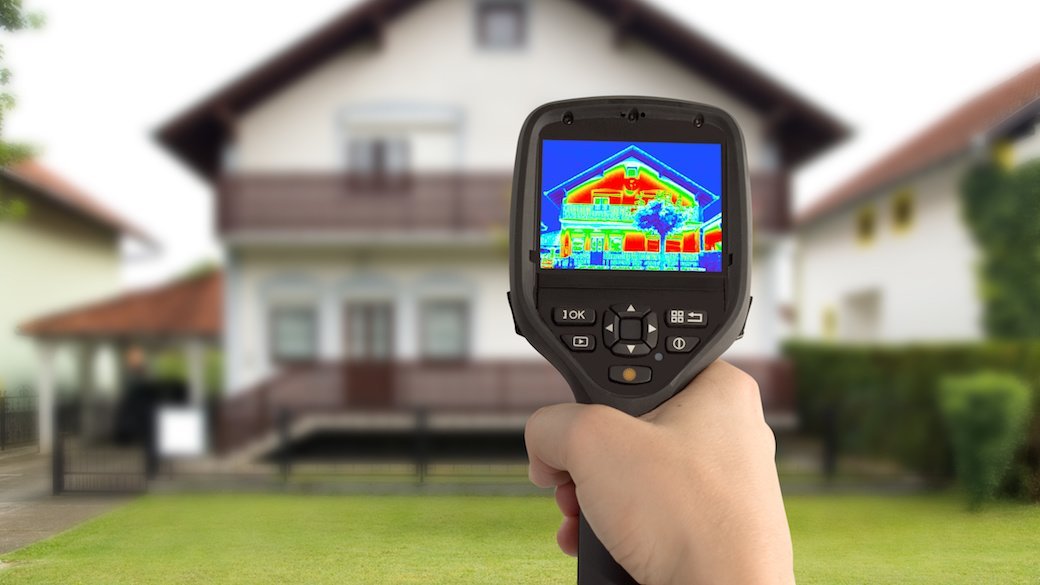 Thermal cameras can have the same viewing range as a standard digital camera. The longer the distance over which you use these cameras, the less sharpness you’ll have.

Q. What does a thermal profile mean?

A. Thermal cameras can measure the heat emitted from objects in the area. They cannot measure heat inside of a building or even through glass. Those objects have their own heat signatures, so they negate any heat measurements from objects on the other side of them. This capability allows thermal cameras to measure heat loss from gaps in a structure, for example.

Q. Does a thermal camera have uses beyond law enforcement?

Q. How does a thermal camera differ from night vision goggles’ technology? 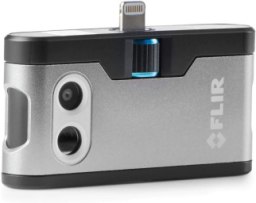 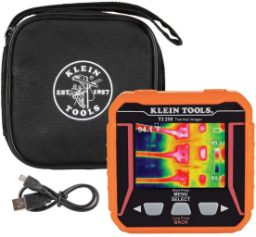 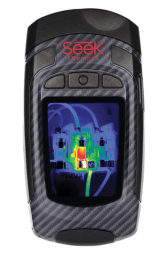 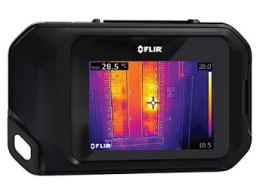 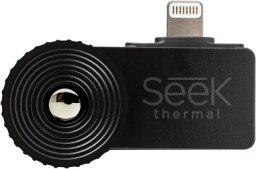