An affordably priced, smartphone-sized device that emits both vibration and an audio alarm.

Highly accurate and easy to hold. A good solution in extreme temps. You don't need to calibrate it first.

Cannot be used in a wet environment.

A small unit that can connect to a computer via USB and is very sensitive.

Arrives fully calibrated; usually does not need recalibration for years. Can interface with a computer to record data. Highly portable and lightweight. Good battery life. 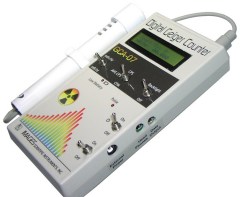 This Geiger counter is on the pricey side, but features like the external wand make it worth the investment.

Pricier than some other options. Recalibration is needed every 12-24 months.

If you're looking for an easy-to-use Geiger counter that can take continuous data and download it, this is a convenient and inexpensive option.

Data can be recorded continuously and downloaded elsewhere. Charges via USB. Features audio and visual signals. Price is very reasonable.

Some people have had trouble integrating it with their computers.

Based on a design used by the Ukrainian Army, this popular option is a great choice for field work.

The compact, lightweight design is also shockproof. Long-lasting battery life. Easy to use. Includes a case. Measures or detects gamma, beta, and X-rays.

No backlighting for the LCD screen. Some find it to be more fragile than the manufacturer claims.

Simply put, a Geiger counter is used to detect radiation. While you may think of a Geiger counter as simply a science fiction trope or a must-have dust collector on a survivalist’s shelf, there are a number of practical reasons why you might want to purchase one.

With a Geiger counter, you can keep tabs on radiation in your food, water, and home. It is a necessity if you live near a nuclear reactor, and rockhounds or those interested in science will find any number of fun ways to use one. Those into collectibles will also find a use for a Geiger counter because the level of radiation in older glassware, clocks, and other collectible items can be fairly significant.

While generally not harmful outside of the body, alpha radiation becomes significantly more dangerous to humans if inhaled or eaten.

Because this is a device that you may have to take with you, all elements of a Geiger counter should be durable and long-lasting. The housing — plastic is standard — should hold up over time. Any buttons or switches should be able to withstand a fair amount of use, and any display screens should be firmly fixed to the housing and resist cracking. If your Geiger counter will be used outside frequently, try to find one that is either waterproof or can otherwise hold up to various weather conditions.

Based on their size, it should be no surprise that most Geiger counters run on batteries. Some use disposable batteries (9 volt or AA/AAA), while rechargeable batteries are more standard.

Disposable: If the Geiger counter uses disposable batteries, find out if it ships with the batteries, and how long on average the batteries will last before they need to be replaced.

Rechargeable: If it uses a rechargeable battery, you need to know how long the charge lasts and how long it takes to recharge. Does it charge via AC, USB, or your car? Some offer a variety of recharging options, but whichever way a Geiger counter is charged, be sure it ships with all the cords necessary to recharge or power it.

Controls like buttons and switches for changing modes and settings can enable more fluid operation, as opposed to scrolling through multiple menus on the LCD screen. Look for a Geiger counter that presents the information in such a way that you can tell at a glance what an item’s radiation level is.

Finally, a Geiger counter is only as accurate as its calibration, so know how often you’ll need to recalibrate it and how easy or difficult this process is.

Did you know?
Hans Geiger and Walter Müller created an early version of the Geiger counter in 1928.
STAFF
BestReviews

While all Geiger counters can read radiation levels, most of the higher-quality ones are also capable of doing much more with the data they collect. This is often helped via software or an app that installs on your computer or smartphone, allowing you to link to the Geiger counter to graph data over time, receive alerts, share your readings with others, monitor levels, and more. If a Geiger counter ships with this capability, verify that any software or app will work with your specific operating system (type and version). Also be sure that the Geiger counter ships with all the cables you’ll need to link up with your computer or phone.

Type: Alpha, beta, gamma, X-ray — top-shelf Geiger counters are capable of detecting a variety of radiation types, but cheaper models will vary in what they can detect. Nearly all can detect gamma rays and X-rays, and most can also detect beta rays. Alpha-ray detection is rarer and usually only available in more expensive Geiger counters.

Range: You should also know the range of radiation that a Geiger counter can detect. Digital Geiger counters can usually detect 1 to 200 milliroentgens per hour (mR/hr), although more expensive devices can reach up to 1,000 mR/hr.

"According to the World Nuclear Association, typical background radiation levels range from 1.5 to 3.5 millisieverts per year."
STAFF
BestReviews

Most Geiger counters are digital and have an LCD screen for displaying the counts per minute/second, radiation levels, and other information. A Geiger counter’s LCD screen should be large enough so that you can clearly see and understand the information you need. A backlit screen is easier to read than one without backlighting. The ability to zoom or manipulate the font size will also be a big plus for some users.

Controls: The controls vary by device, but most Geiger counters offer some way to switch between type (metric, imperial), counts per minute and counts per second, on and off, and more. Some Geiger counter controls have computerized menus for changing settings, while others rely on buttons and switches.

Ports: Check if the Geiger counter you’re interested in has a speaker/headphone port and a data output port so you can use it with your computer.

Geiger counters start at less than $100 and can go up to $400 or $500 for high-end consumer devices. Under $150, you’ll find lower-end devices with limited ranges, features, and other capabilities. Spend over $150 and you’ll find Geiger counters that can detect more radiation types at a wider range, sturdier build quality, and much more robust software/sharing capabilities that allow you to do more with the data you collect.

Did you know?
Of the three primary types of radiation (alpha, beta, and gamma), gamma has the highest energy and penetrating power. It can even be detected through a thick lead shield.
STAFF
BestReviews 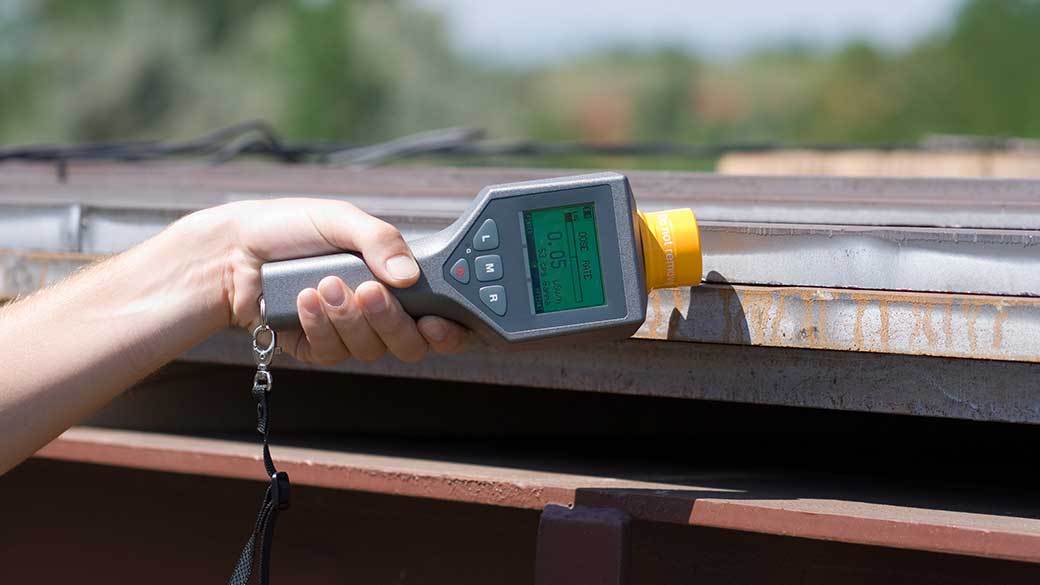 Background radiation consists of normal radiation that always surrounds us. Its sources include the earth, sky, and objects that we use every day.

Q. What’s the best way to test for radiation in food?
A.
While you can use a Geiger counter to test for radiation in fish and other foods, you shouldn’t necessarily rely too much on the results. Because the radiation readings in foods can be miniscule and blend in easily with background radiation, tests of this nature are usually done in a lab. That said, if you do wish to use your Geiger counter on food, do it the right way. Instead of a single apple, say, test a bushel of them. For best results, turn the Geiger counter on and place it close to the food, leaving it for a minute to generate a solid reading. Do this several times in different spots around the food to increase your chances of ending up with an accurate reading.

Q. Can my Geiger counter be used to detect a microwave oven leak?
A.
No. Geiger counters can detect ionizing radiation, such as that emitted by uranium. While microwaves, cell phones, and similar items do produce radiation, it is of the nonionizing variety. To detect this form of radiation, you’ll need to buy an electromagnetic frequency (EMF) meter.

Best of the Best
RADEX by Quarta-Rad
RD1503+
Bottom Line
An affordably priced, smartphone-sized device that emits both vibration and an audio alarm.
Shop Now 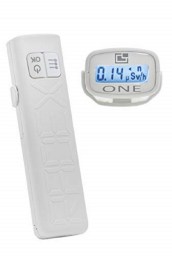 Best Bang for the Buck
RADEX by Quarta-Rad
Personal RAD Safety
Bottom Line
A small unit that can connect to a computer via USB and is very sensitive.
Shop Now 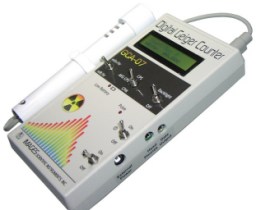 Top Pick
imagesco
GCA-07W
Bottom Line
This Geiger counter is on the pricey side, but features like the external wand make it worth the investment.
Shop Now

Top Pick
GQ
GMC-320 Plus
Bottom Line
If you're looking for an easy-to-use Geiger counter that can take continuous data and download it, this is a convenient and inexpensive option.
Shop Now

Top Pick
Ecotest
Geiger Counter Terra-P
Bottom Line
Based on a design used by the Ukrainian Army, this popular option is a great choice for field work.
Shop Now