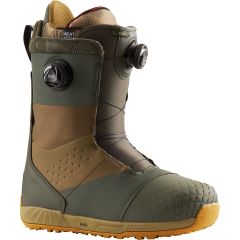 Solid boots that put performance at the forefront.

Can fit on the wider side making it harder for people with narrow feet. 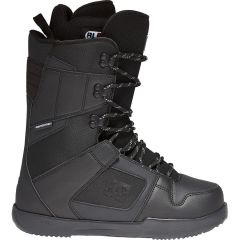 These boots come with an iconic lace-up design that is great for beginners or park riders.

The no-frills design adjusts anywhere on the mountain. The mid-range flex is great for beginners who want to progress in the sport. Very comfortable while remaining lightweight.

Material will begin to fall apart quickly because of being light. 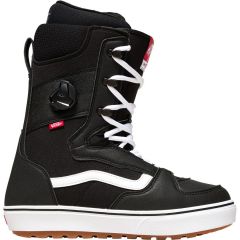 A comfortable boot with a hybrid system that allows for a wide-ranging fit.

The BOA system can be hard to fix if it breaks. 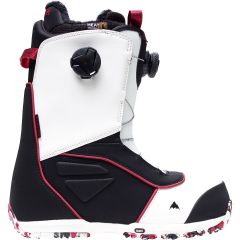 A great fitting boot that will keep you comfortable from the first chair to the final run.

The double BOA design tailors fit for both lower and top parts of the boot. Laces made of cord so that the flex of the boot stays true. The liner includes 3M tech to keep feet warm.

The heel pocket can be a little too roomy for some. 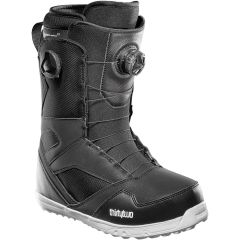 A double BOA boot with a great liner and a durable shell that will stay true to fit for a while.

Soft flex for new riders to turn easily. Thermo-moldable liner stays true to foot size. The footbed is made to be soft to stop cramping. The double BOA comes on and off easily.

The fit runs a bit too snug for some users.

For avid snowboarders, there’s nothing better than an afternoon on the slopes. But your whole day can be ruined if you don’t have a well-fitting pair of men’s snowboard boots to keep you comfortable and safe.

Snowboard boots are designed to attach to your board with bindings, so you don’t fall off when you’re flying down the mountain. Unlike ski boots, these boots have some flex, which means you can assume a comfortable, balanced stance on your board. Snowboard boots can also give you more control when you’re traveling at high speed down the slopes. Fit is crucial, though, and your technique can be affected if you don’t have boots that fit properly.

With so many men’s snowboard boots on the market, choosing the right pair can be difficult. Our buying guide has all the facts to help you find the best boots for your next snowboarding adventure. We’ve included some specific product recommendations, too, so you can get started shopping as soon as possible. 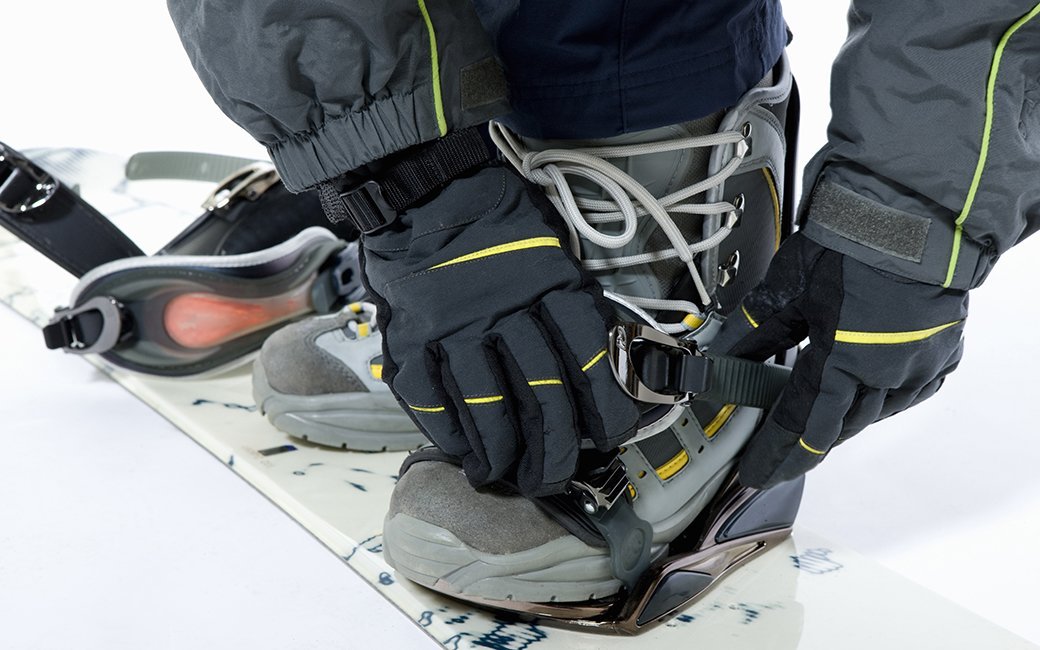 Men’s snowboard boots are available in a wide range of colors, but black and gray are the most popular options because they coordinate with any color gear.

In general, the sizes of men’s snowboard boots match those for standard footwear. There can be some variation from brand to brand: one manufacturer’s size 10 may not fit the same way as another brand’s. Fortunately, most snowboard boot manufacturers offer sizing charts with measurements to help you determine which size is best for your feet.

For a proper fit, men’s snowboard boots should be snug across the top of the foot and around the ankle. There should be slight resistance when you flex your feet and ankles, but the boots should still provide a comfortable range of motion. Your toes should only slightly touch the toe box, and your heel should sit firmly in the heel cup. You don’t want your heels lifting in the boots.

When you’re shopping for men’s snowboard boots, it’s crucial to consider your experience with the sport and your preferred riding style. The right boot for one type of snowboarding may not be effective for other types.

Beginner: If you’re new to snowboarding, you’re better off with a soft snowboard boot that allows for a fuller range of motion. It enables you to have greater control over the board as you’re learning to master the proper form and technique.

All-mountain: If you’re a fan of all-mountain snowboarding, which involves riding over different types of snowboarding-suitable terrain, you’ll do best with a boot that offers more flexibility. For greater speed, choose a stiffer pair of boots for better reactions at higher speeds.

Freeride: If you’re into freeriding, which involves going over deep snow and untracked terrain, opt for stiffer boots that allow for greater precision and speed. The stiffness can also help you generate more power as you move across firm or icy snow.

Freestyle: If you’re a fan of spins, jumps, and other tricks, you want a softer boot that feels more responsive and allows for faster maneuvers.

Did you know?
Stiff-flex men’s snowboard boots generally last longer than soft-flex boots. That’s because they're stiffer to begin with, so it takes them longer to soften.
STAFF
BestReviews

The flexibility of a snowboard boot is a factor of how soft or stiff it is. While certain types of riding require a specific amount of flex, your comfort and personal preference also help determine what amount of flex you should choose.

Flex is measured on a scale of 1 to 10, with 1 being soft and the most flexible, and 10 being stiff and the least flexible.

Here are some general guidelines for choosing flex:

Traditional laces are a classic option found on plenty of footwear. They’re inexpensive and easy to replace, and they allow you to manually control how tight the boots are. However, it can be tough to tie laces when you’re wearing gloves or your hands are numb from the cold, and laces can come loose unexpectedly.

Quick-pull laces feature a pulley system that offers quick fastening. They also allow you to tighten certain areas of the boot individually. For example, you can tighten the ankle without tightening the forefoot. Quick-pull laces are easy to close when you’re wearing gloves, too. However, some snowboarders don’t find that they get tight enough, and the laces aren’t as easy to replace as traditional laces.

Boa systems feature one or two dials or wheels that are connected to thin steel cables. The dials control the fit of the boots and make it quick and easy to fasten your boots. You can usually do it with one hand and while wearing gloves. The Boa system isn’t as likely to come loose unexpectedly. However, it’s more expensive than other lacing systems, and broken cables aren’t as easy to replace as laces.

The inner portion of a snowboard boot is called the liner. Most liners are made from lightweight, moldable ethylene vinyl acetate (EVA), which cushions and insulates the boots and provides stability. Some men’s snowboard boots have removable liners, so you can take the liners out after a day on the slopes and allow them to dry. You can choose from three main types of snowboard boot liners:

Stock or non-moldable liners provide basic cushioning and insulation for your feet. They gradually conform to the shape of your feet with repeated use.

Thermoformable liners use the heat from your feet to mold the liners to a custom fit. It usually takes a couple days of wearing the boots for the liners to mold properly.

Custom moldable liners use an outside heat source to mold the liners to your feet. These types of liners must be molded professionally at a ski shop.

Did you know?
Your feet won’t move around much inside snowboard boots that fit properly.
STAFF
BestReviews

Snowboard: DC Men’s Media Blitz Torstein Horgmo Snowboard
You can’t get far with snowboarding if you don’t have a high-quality, responsive board to ride. This option from DC is one of our favorites because it features an impact-ready core and provides plenty of flex to keep you safe if you knock into any obstacles.

Snowboard bindings: Burton Malavita Snowboard Bindings
If you’re doing jumps and spins on your snowboard, you definitely want to keep your boots connected to your board with bindings. We like these from Burton because they’re lightweight and comfortable but still provide plenty of support.

Snowboarding jacket: Wantdo Snowboarding Jacket
You want to stay warm while you’re on the slopes, so you need a comfy snowboarding jacket to ward off the chill. This one from Wantdo is water repellant and insulated for warmth, and it features plenty of pockets to hold all your personal items.

Did you know?
Snowboard socks are thin and smooth, so they don’t collect moisture. That means there isn’t as much friction between your feet and the boots, limiting hot spots and blisters.
STAFF
BestReviews

Men’s snowboard boots vary in price based on flex, lace system, liner type, and other features. Most boots cost between $100 and $500.

Inexpensive: The most affordable men’s snowboard boots are soft-flex boots with traditional or quick-pull laces. These often feature stock liners, though some are removable. You’ll typically pay between $100 and $230 for these boots.

Mid-range: These men’s snowboard boots are soft- to medium-flex boots with quick-pull or Boa system laces. They typically feature thermoformable liners that may be removable. You can expect to pay $230 to $380 for these boots.

Expensive: The most expensive men’s snowboard boots are medium- to stiff-flex boots with Boa system laces. These can have either thermoformable or custom moldable liners that may be removable. These boots typically cost between $380 and $500 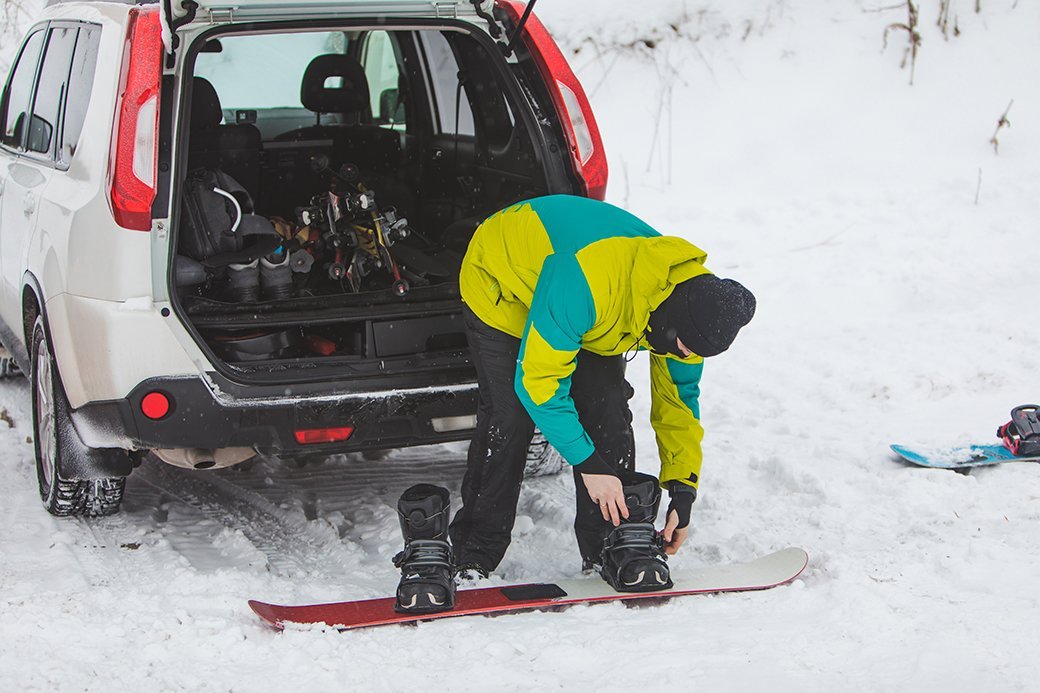 If your snowboard boots have quick-pull or Boa system laces, know that the laces aren’t as easy to replace as traditional ones. If one breaks or wears out, you might have to cut your snowboarding session short.

Q. Can’t I just rent snowboard boots at the resort or mountain where I’m riding?
A. If you only go snowboarding occasionally, it makes sense to rent boots. But if you’re a regular snowboarder, you’re better off buying your own. They’ll be much more comfortable than rental boots, which can make your snowboarding experience a lot more enjoyable.

Q. How long do snowboard boots usually last?
A. It depends on how often you wear them. One pair is usually good for 100 to 125 days of snowboarding time. They can wear down more quickly if you walk around in them when you’re not riding. You’ll usually know that it’s time for a new pair when the boot becomes so soft that it doesn’t provide as much support as it used to. Boots with tears or rips require replacement, too. 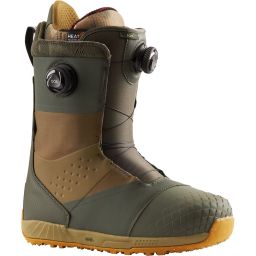 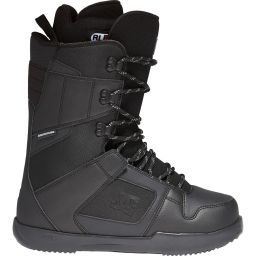 Best Bang for the Buck
DC
Phase
Bottom Line
These boots come with an iconic lace-up design that is great for beginners or park riders.
Shop Now 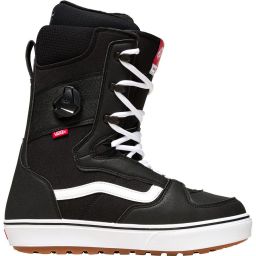 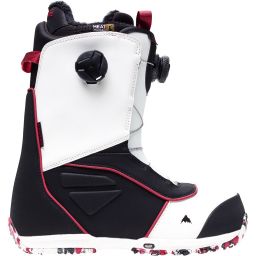 Top Pick
Burton
Ruler
Bottom Line
A great fitting boot that will keep you comfortable from the first chair to the final run.
Shop Now 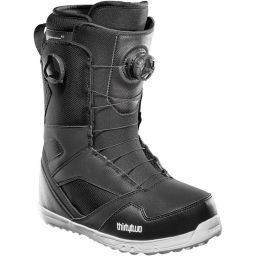 Top Pick
ThirtyTwo
STW Double BOA
Bottom Line
A double BOA boot with a great liner and a durable shell that will stay true to fit for a while.
Shop Now 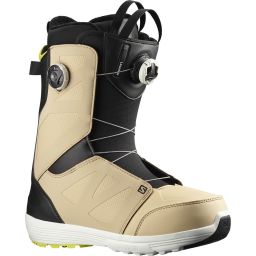 Top Pick
Salomon
Launch Boa
Bottom Line
A great boot with a system that will keep you comfortable all day long.
Shop Now 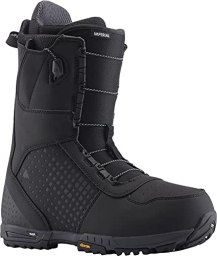 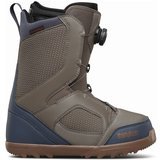 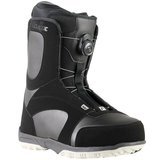