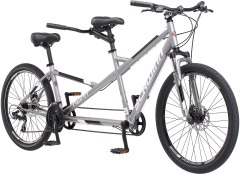 A durable bike from a trusted brand with comfortable and cushioned ergonomic seats.

Bike for 2 that is easy to mount and has thick padded seats. Features textured grips, 7-speed shifters, and alloy brakes. Made of aluminum. Seats are height adjustable. Has 26-inch tires. For riders 63-73 inches tall.

Not meant for those under 63 inches tall. 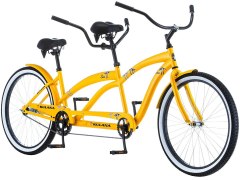 A stylish tandem bike with protective fenders and spring seats.

Offers 1 speed and has a steel frame with 26-inch wheels. For rider heights between 5’4” and 6’2”. Has wide handlebars that are angled back and cushioned seats. Features cable-free brakes in the back. Available in yellow and orange.

Some reports of items arriving damaged.

A tandem bike with many speed options and a sturdy steel frame with alloy parts.

Blue 2-seater bike with 26-inch wheels and handlebars with textured grips. Alloy pedals have reflectors. Both seats are padded, adjustable, and contoured. Offers 21 speeds and hand brakes on the handlebars. Weighs about 59 pounds.

Rear handlebars are positioned low below the front seat.

If you and your partner love to do everything together, including riding bikes, you might want to consider a tandem bike. Imagine enjoying leisurely bike rides together at a pace to suit you both. But deciding which model to buy can be a challenge, especially if you aren’t especially knowledgeable about bicycles or this is your first foray into tandem biking.

At the top of this page, you'll find our favorite tandem bikes available right now. But first, read on to learn more about tandem bikes and how to choose the best one for you. 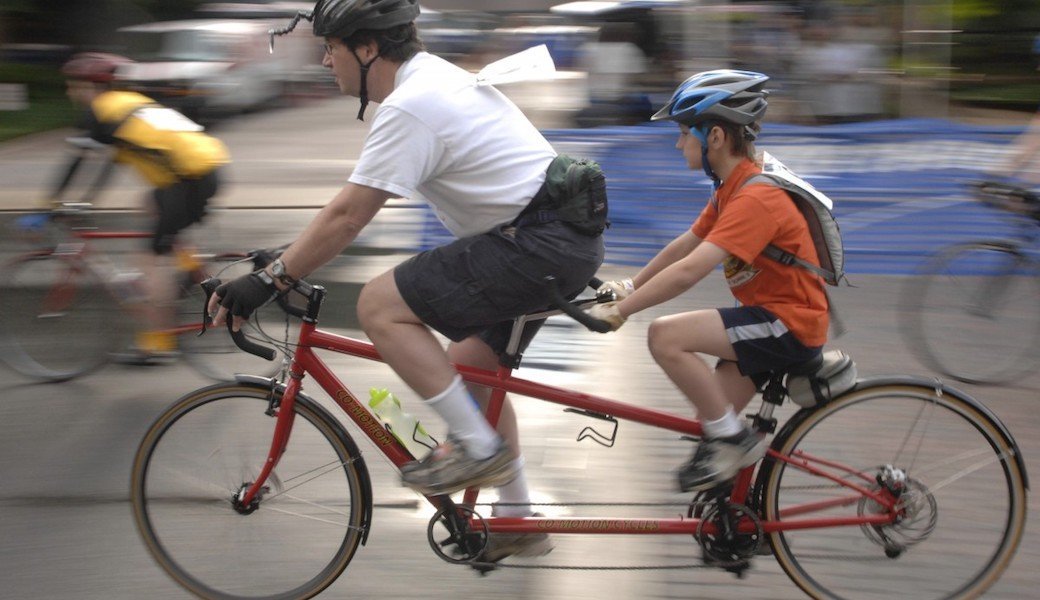 A tandem bike is a great way for two people with differing cycling abilities to ride together.

Making a tandem bike isn't as simple as just sticking two bicycle frames together. The frame must be well constructed in order to avoid unwanted flexibility.

Some manufacturers of tandem bikes keep the frame stiff by making it as short as possible. But this can result in a cramped tandem that isn’t very pleasurable to ride.

A better option is to increase the tube diameter and/or wall thickness of the frame.

Tandem bike frames are constructed from a number of materials. Here, we take a closer look at some of the most popular options.

Buying a tandem bike of the correct size can be tricky, since you're looking for a cycle that fits two people who may be of very different heights. Because the captain (the person in front) must stand up and keep the tandem steady while the stoker (the person behind) mounts, she needs to be able to straddle the bike with both feet firmly on the ground. It's not necessary for the stoker to be able to touch the ground, just as long as he can reach the pedals.

"Most tandem bike wheels are 27 or 28 inches in diameter, which is ideal for touring. Choose 26-inch wheels for mountain biking."
STAFF
BestReviews

Since tandem bicycles have only two wheels but hold two people, they take twice the weight of a standard single-person bike. As such, tandem wheels are generally sturdier than average, with 40 or 48 spokes instead of the standard 28, 32, or 36 spokes.

Good brakes are important on any bike but even more so on a tandem bike because there is more mass to bring to a stop.

What's more, because the wheels are carrying more weight, and hence have better grip, tandem bikes can better accommodate very powerful brakes that would cause a standard bike’s rear wheel to lock up.

Disc brakes on both the front and rear wheels are the brakes of choice for most tandem riders. However, V-brakes aren't a bad choice either.

Standard rim brakes don't pack enough of a punch for most tandem riders.

Casual tandem cyclists probably won’t need a wide selection of gears. But since you'll generally be reaching higher speeds downhill and on flat ground and be somewhat slower going uphill, you may find that you want bother higher and lower gears than those found on a standard solo bike.

Some tandem bikes allow you to change the transmission to meet your individual needs.

If you and your cycling partner are of different heights, you should also consider having different length cranks. If the crank length is too long for you, it will feel difficult to pedal quickly.

Tandem bikes aren't cheap, but you shouldn't have to spend the earth to get a decent model for casual use. Expect to pay between $200 and $3,000, depending on features.

Basic tandem bikes are perfect for occasional use. They tend to cost between $200 and $500.

Mid-priced tandem bikes are durable and offer a smooth ride. Most cost between $500 and $1,000.

High-end tandem bikes are designed for serious cyclists. Expect to pay between $1,000 and $3,000.

Expert Tip
Although the larger rider is usually captain, since it’s harder to control a tandem with the heavier rider as stoker, this isn’t a rule. The more confident cyclist will usually do better as captain.
STAFF
BestReviews

Did you know?
While not technically a tandem bike, a bike trailer for children is like a small bicycle that attaches to the back of a regular bike.
STAFF
BestReviews

Q. What are the advantages of a tandem bike?

A. Tandem bikes have a range of advantages for cyclists who like to ride together. First, a tandem bike goes faster than a solo bike (if you don't have to climb a lot of hills). Since you're closer to your fellow rider, it's easier to hear one another, so you don't have to yell when you want to communicate. What's more, a single tandem is lighter than two solo bikes to carry. And you only need to carry spare parts for one bike rather than two if you go touring.

Q. What are the disadvantages of a tandem bike?

A. Nothing is perfect, and you'll find some disadvantages to tandem bikes, too. One of the biggest issues is that they're harder to transport from one place to another. Maneuvering is also more of an issue due to the increased length.

A. As long as they're tall enough to reach the pedals and the handlebars, children can ride a tandem bike in the stoker position. You can also find bike trailers for smaller children that attach to the back of a solo bike, effectively turning it into a tandem. 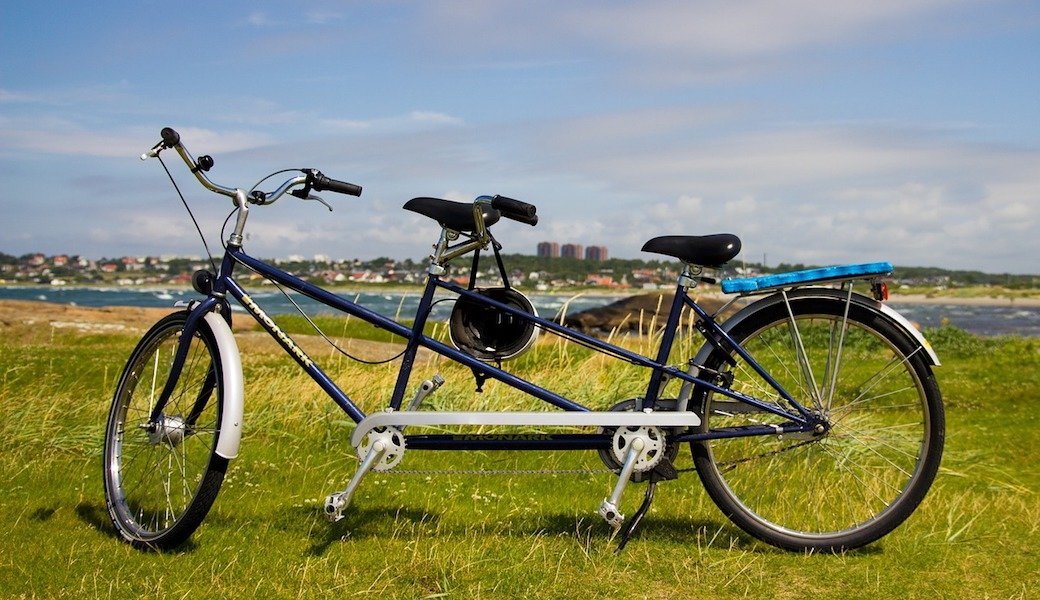 It can take a bit of practice for both riders to sync their pedaling cadence on a tandem bike, so don't expect to be perfect the first time out.

Learn the lingo of tandem biking

When you ride a tandem bike, the captain is in charge of steering and braking, but she'll still need some assistance from the stoker. The world of tandem biking has standard commands that the captain and stoker give each other. While you could make up your own commands, we'd recommend learning these standard ones because it will make it easier if you ride with other experienced tandem cyclists in the future. 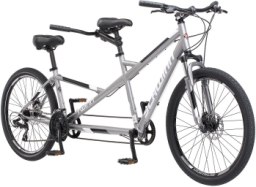 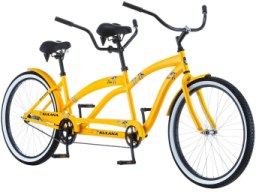 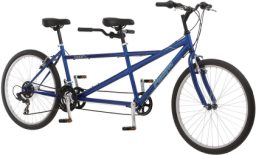 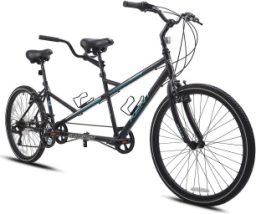 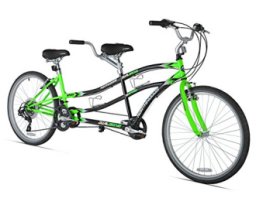 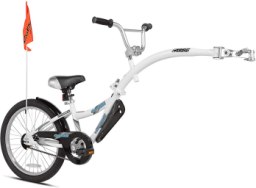 Top Pick
WeeRide
Co-Pilot Bike Trailer
Bottom Line
A safe and affordable way to add a second rider without the need for a tandem model. Challenging to assemble but end results are positive.
Shop Now 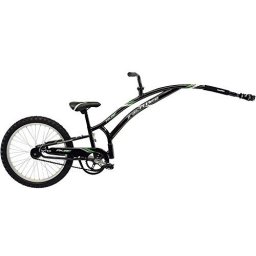