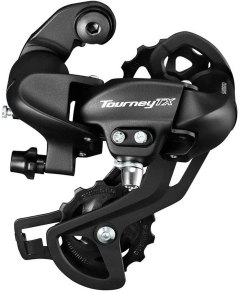 This is a good budget pick if you want a derailleur that works without being too flashy.

Installation is straightforward and takes about 30 minutes. Made of lightweight aluminum instead of heavy steel. Shifting is smooth. Works well on a variety of bicycles and configurations.

When on the softest gear, it has a tendency to touch the spoke.

The best budget rear model available for those wanting a small improvement in performance.

Heavier than other rear derailleurs. 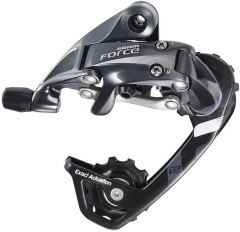 Heavy-duty construction with an outside carbon fiber cage allows the derailleur to resist dents and scratches. Outer jockey wheel rides smoothly through gear changes without getting hung up on the chain. Comes in multiple speeds.

Heavier and more expensive than others. 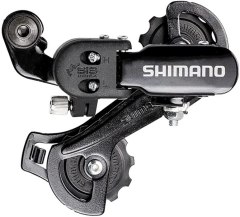 Made with aluminum alloy that shifts promptly, guaranteeing a safe ride, this rear derailleur is usable with mountain, road, and folding bicycles.

Made with long-lasting aluminum alloy material. Fast shifting ability for a safe and balanced ride. Easy to install and maintain. Adaptable for use with mountain, folding, and road bicycles. You’ll get 2 mount types to select from – direct and hub mount.

Some parts are made of plastics so they may not hold satisfactorily. 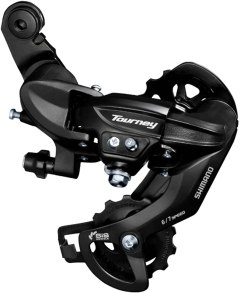 Derailleur is the French word for a bicycle gear mechanism that moves the bike chain from one cog or sprocket to another. The derailleur also has a mechanism for taking up the slack in the chain as it moves to smaller cogs.

When should you replace the derailleur on your bike? That’s a judgment call. Derailleur failures normally don’t happen in some kind of catastrophic event. Instead, they gradually get worse, becoming incrementally harder or slower to shift. Other common problems include the chain falling off the largest chainring or cog onto the spokes or falling off the smallest cog and getting stuck between the cassette and frame. If your chain is making noises when you’re shifting, that’s also an indication of trouble.

Many of these problems can be fixed by adjusting the derailleur. Eventually, though, there comes a point when further adjustments won’t be enough to keep things moving smoothly, and you need to install a new derailleur.

A noisy chain is usually the result of the upper derailleur pulley being too close to the cassette. Use the B screw — usually found between the high-limit screw and the low-limit screw on the body of the derailleur.

There are generally two derailleur mechanisms for any multi-speed bike’s gear shifting apparatus: one in the front and the other in the rear. When replacing either of them, it’s important to get compatible mechanisms that work with each other as well as with your model of bike.

The larger the cassettes on your bike and the greater the number of teeth on the rear cogs and front chainrings, the longer the chain you’ll need to accommodate them all. This will affect the derailleur you choose for your bike. Alternately, you can use a bike chain tool to lengthen or shorten your chain.

Steel was the bike derailleur material of choice for many years, but advanced manufacturing methods, such as cold forging, especially with aluminum, has reduced the cost and weight of the parts while increasing their strength. Today, derailleurs can be made with a combination of multiple materials, including carbon fiber, aluminum, magnesium, and steel.

There are three different cage lengths; short, medium, and long. Long cage lengths are used when there is a large range of teeth between the largest cog on a cassette and the smallest. The greater the range, the longer the cage length will need to be. However, a medium cage length will be sufficient for most bikes. Never change your cage length unless you have a specific reason to do so.

Inexpensive: Anything under $20 is considered the low price range for derailleurs. At this price, you will normally find rear derailleurs or inexpensive front derailleurs.

Mid-range: From $20 to $80 is the medium price for derailleurs. Most derailleurs, front and back, will be found in this range, from nine to eleven speeds in the rear and up to three in the front. You should expect long-lasting derailleurs of good quality in this price range.

Expensive: Over $80 is where you’ll find the high-end bicycle derailleurs. These will be the high-quality derailleurs for professionals made of the best materials and manufactured to the highest engineering standards.

The numbers etched on the side of the chainring refers to the number of teeth on each chainring. For instance, 50x34 means there are 50 teeth on the large chainring and 34 on the small one.

Q. What is a chainring?
A.
That is the bicycling term for the toothed sprockets the chain wraps around at the front of the drivetrain on the crankset where the pedals are attached. 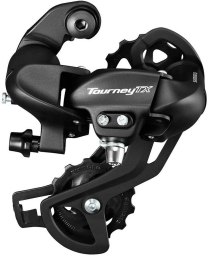 Best of the Best
SHIMANO
Tourney Mountain Bike Rear Derailleur
Bottom Line
This is a good budget pick if you want a derailleur that works without being too flashy.
Shop Now 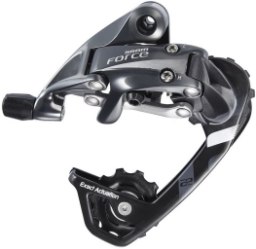 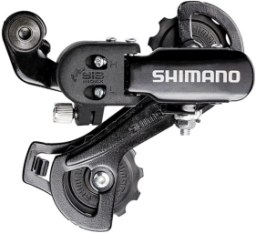 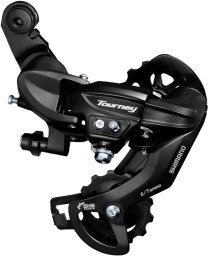