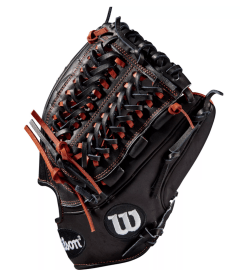 A comfortable glove for secure ball handling and long-lasting use.

An 11.75-inch glove made of leather and a sturdy and lightweight synthetic material. Has a closed, pro-laced web. From the 2019 series. Maintains its shape and has a carefully designed palm to minimize the break-in period.

May still take some time to break in. 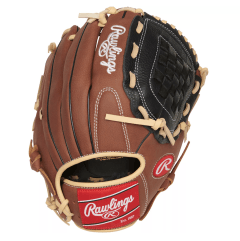 A glove from a trusted brand that reduces the ball’s impact on the hand.

Twelve-inch glove made of full-grain leather with an oiled finish. Back of the fingers has cushioning. Has a basket web and boa openings for a gentle but sturdy feel. Palm cushioning absorbs shock. Modeled after professional gloves.

May be difficult to break in. 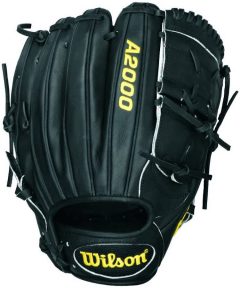 This series is sleek and concealing for a standout look on the field.

Still takes time to break-in. Player-specific modeling may not be ideal for all pitchers. 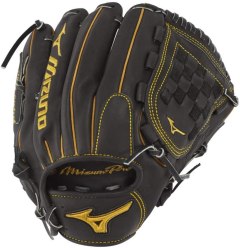 Woven webbing for pitch concealment. "Kip" leather is soft and light. Leather for both shell and palm for consistent performance. Pre-shaped pocket in several depths. Designed to center in the palm.

Expensive. Some seams may chafe due to placement. 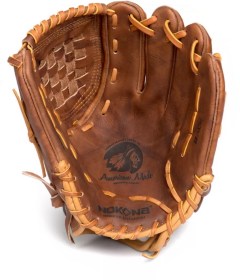 For those who prefer a sturdier glove for the break-in experience, try this option.

A new baseball player may not require a specific glove because they’re still learning so much about the game, but as a player gains age and experience, they may begin to focus on one or two defensive positions. At this point, purchasing a specialized glove that matches the defensive position is a smart idea because it will help the player advance their skill set.

Pitcher’s gloves come in several sizes, colors, and designs, but these gloves also share a few standard features that are necessary to adhere to the rules of the game. We put together a list of the most important features for you to consider when purchasing a pitcher’s glove. 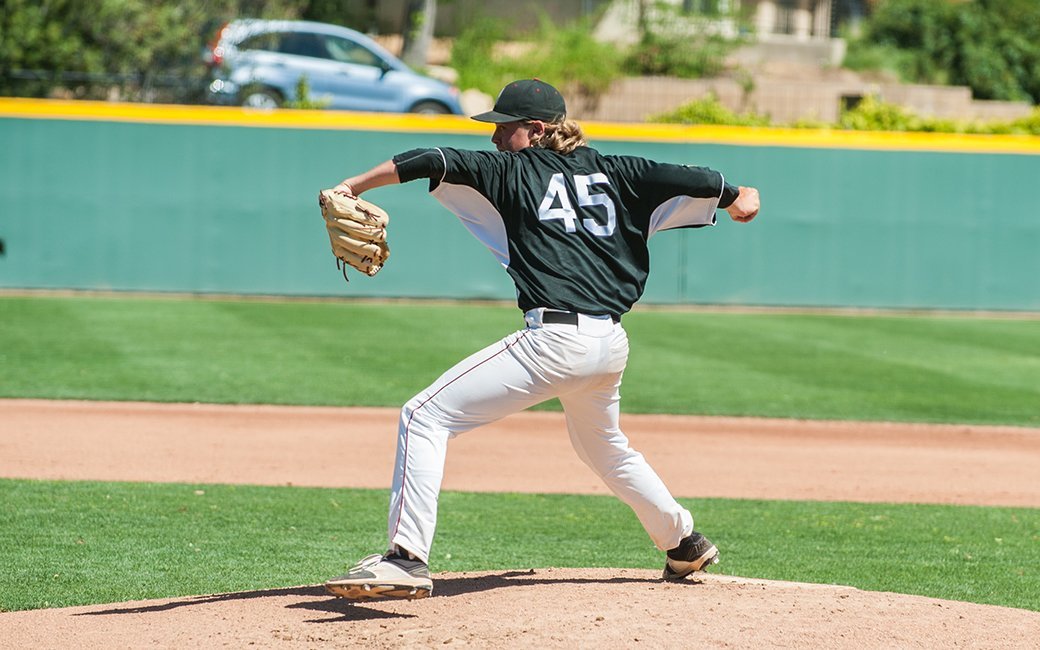 Pitchers hold the ball in the pocket of the glove before starting the windup so they can adjust their grip on the baseball with the other hand to throw a particular pitch.

The manufacturer lists the size of a pitcher’s glove as the distance from the tip of the glove index finger to the base of the wrist. The maximum size for a pitcher’s glove is typically 12 inches, but this is only appropriate for older players.

As players begin to pitch more, they will gain a better understanding of the size that makes them feel most comfortable and confident on the mound. Some pitchers prefer a smaller glove because it doesn’t feel like it’s in the way during the windup and pitch. Others prefer a large glove because it helps them play defense more effectively.

When fielding a ground ball or catching a line drive or popup, a pitcher can successfully use a glove that’s larger than the typical infielder’s glove. When the pitcher fields the ball, they usually have more time to throw the ball to a base than a shortstop, so the pitcher isn’t as worried about the difficulty of grabbing the ball out of the bigger glove quickly to throw to the base. Infielders will want a smaller glove so they can grab the ball faster out of the glove.

You’ll need to choose between leather and synthetic material. Leather is highly durable, but it also wears a high price tag, and it requires a longer break-in period than a synthetic glove.

The primary features that set a pitcher’s glove apart from those worn in other defensive positions include the webbing of the glove and the style on the back of the glove.

A pitcher’s glove has a closed style of webbing that is sometimes referred to as H pattern webbing. This means you cannot see daylight through the web.

Closed webbing allows the pitcher to hold the ball in the pocket of the glove while adjusting the grip on the ball before throwing. The batter will not be able to see what kind of grip the pitcher is using. This is helpful because if the batter can see the grip, they may be able to predict whether a fastball or off-speed pitch is coming.

Because young pitchers usually throw fastballs, they don’t need to hide their grip like older pitchers (who may throw curveballs or sliders along with fastballs) do.

One downside to closed webbing is if the pitcher is fielding a ground ball, they could end up with dirt from the mound scooped into the pocket of the glove. This can make it difficult for the pitcher to grip the ball securely while trying to throw the ground ball to a base.

Occasionally, a pitcher will pick a glove with trapezoid webbing, which has a detailed lacing pattern that only allows a little bit of daylight through. The pitcher can hide their grip successfully without scooping much dirt into the pocket.

The back of a pitcher’s glove often includes an open area above the wrist strap that encourages airflow to the glove hand. There may be a hole for the index finger that provides extra support for holding the ball securely while the pitcher adjusts their grip.

"A pitcher’s glove should last longer than gloves for other positions because pitchers usually only throw one to three times per week."
STAFF
BestReviews

Baseball cleats: New Balance 3000 V4 TPU Molded Baseball Cleat
A pitcher needs a high-quality set of cleats that provide sure footing as they push off the pitching rubber to generate power. These New Balance 3000 V4 cleats have an extremely comfortable fit and a lightweight design.

Baseball bags: Easton Bat Pack
Even if they don’t play other positions, pitchers still have plenty of gear to carry in and out of the dugout. A long-lasting baseball bag is a key purchase. This durable Easton bag has multiple pockets to simplify organization of the gear.

Baseball bats: Marucci Cat7 BBCOR Baseball Bat
Pitchers in youth leagues often still hit, even if they rarely hit in college and professional leagues. The Marucci bat is an excellent performer, giving players the weight distribution and balance they need at the plate.

Did you know?
During warmups between innings, the pitcher will use varying glove movements to signal to the catcher whether an off-speed warmup pitch or a fastball is coming.
STAFF
BestReviews

The price structure for pitcher’s gloves is similar to that of other types of baseball gloves made for defensive positions.

Inexpensive: Pitcher’s gloves for youth players cost $20 to $50. That said, many beginner players will want more of a versatile glove at this point in their athletic career so they can try out multiple positions.

Mid-range: As a middle school or high school player begins to focus more on pitching, they may want a mid-range pitcher’s glove. These gloves cost $50 to $100 and are adequate for pitchers who practice and play the position a couple times a week.

Expensive: Some players realize they want to focus exclusively on pitching. Such players need a specialized pitcher’s glove. An athlete who pitches games several times a week would likely do best with a glove in the $100 to $300 range.

When selecting a pitcher’s glove, you will need to adhere to a few rules. The tips listed here are specific to advanced amateur and professional baseball leagues. For a local league, the rules may differ, so be sure to check before purchasing.

If an umpire determines that a pitcher’s glove is distracting or illegal, they will have the glove replaced immediately. 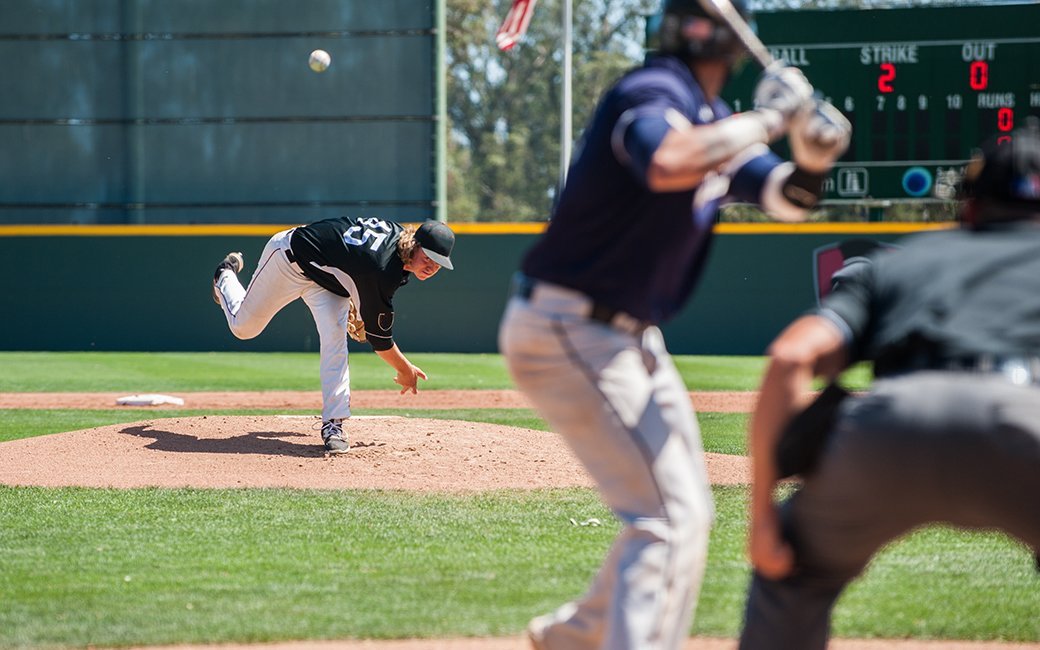 You know your pitcher’s glove is broken in well when the glove is easy to squeeze closed and the ball sticks in the pocket and palm securely.

Q. Is a pitcher’s glove restricted to only pitching?
A. There’s no rule that says you must use a particular glove only when pitching. In fact, a young player may want to use their pitcher’s glove when playing other positions because it’s too expensive to buy multiple gloves. However, for the best results for an older player, a separate pitcher’s glove is a smart choice.

Q. How can I make my pitcher’s glove last longer?
A. Keep the laces on the glove tightened and tied. You may need to check the laces one to three times a week to determine tightness. Don’t leave the glove in wet grass or areas where it will be exposed to varying temperatures or direct sunlight.

Q. How will I know when my current pitcher’s glove is worn out and ready for replacement?
A. If you notice the fingers of the glove bend backward when catching a line drive or hard-thrown ball, the glove may have lost some of its firmness. Damage to the laces in the pocket could allow a ball to go through, which is dangerous. Additionally, if the padding in the palm no longer protects your hand, a replacement is a good idea.

Q. Why do I see pitchers cover their face with their glove when talking to the manager or catcher on the mound?
A. This commonly happens in Major League Baseball, where television cameras seem to be everywhere. The pitcher does not want the other team’s players or coaches watching the TV broadcast in the locker room and reading their lips as they discuss strategy, thus the covering of the face. 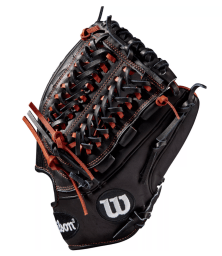 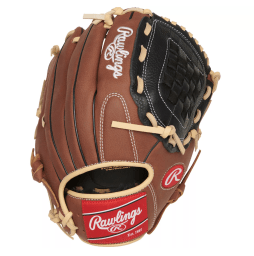 Best Bang for the Buck
Rawlings
12'' Premium Series Glove 2022
Bottom Line
A glove from a trusted brand that reduces the ball’s impact on the hand.
Shop Now 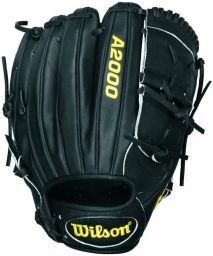 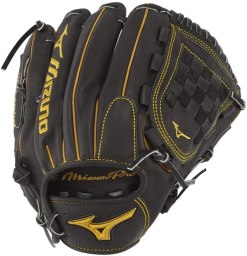 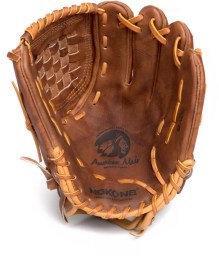 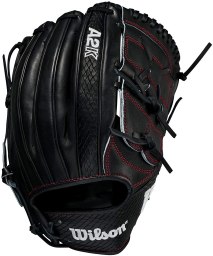 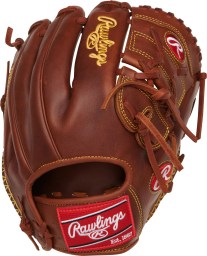 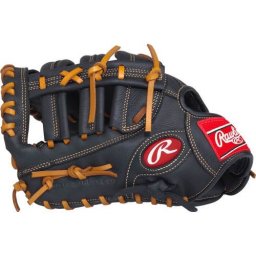 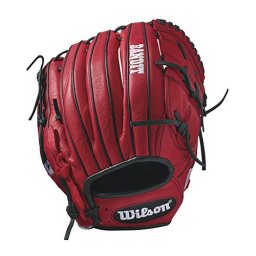