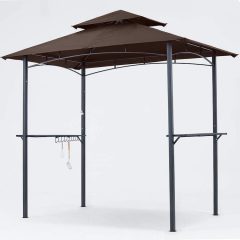 This high-quality grill gazebo is a great choice for any outdoor barbecue.

Designed with rustproof steel frame to prevent top from collecting water and two convenient shelves for grill accessories, drinks, food, etc. Top of gazebo is vented and double-tiered to allow smoke to come out. Fabric on top is waterproof and rip-lock. Comes with 2 LED lights.

Some customers noted product arrived with some damages. 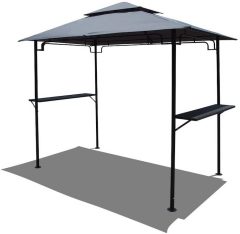 This model is great for grilling and won't break the bank.

A couple of customers noted unsturdiness. 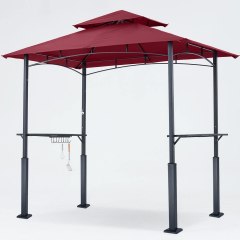 This high-quality grill gazebo will provide nice shade for your patio barbecue or cookout, day or night.

A couple of customers noted product is not suitable for very strong winds. 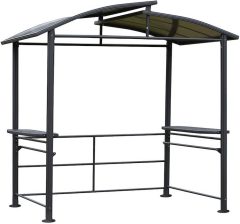 This sturdy grill gazebo provides cozy shade for outdoor barbecues and is designed for rain or shine. 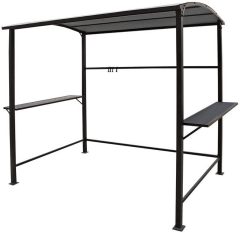 To those who cook outdoors, it’s probably a familiar scenario. You finally have the grill at the right temperature, the sun shining down as you babysit your coals. On go the steaks as the sun ducks behind an angry cloud, and suddenly you’re facing a summer squall, the grill — and your soggy meat — hissing in the deluge.

With a grill gazebo, you can be the master of both the elements and your barbeque. These specially designed gazebos can not only protect you from the heat of the sun but also allow you to fire up the grill regardless of the weather. Grill gazebos also provide a decorative central feature in your outdoor living area, in addition to being equipped with specialized features and safety elements that can assist you in your grilling.

Grill gazebos range from the simple and inexpensive to the deluxe and pricey, and you may feel lost when you start to shop for one. This guide can help you to sort out the various features and other considerations you need to know before wading into this market. We also cover price ranges and offer some of our personal favorites in the grill gazebo niche. 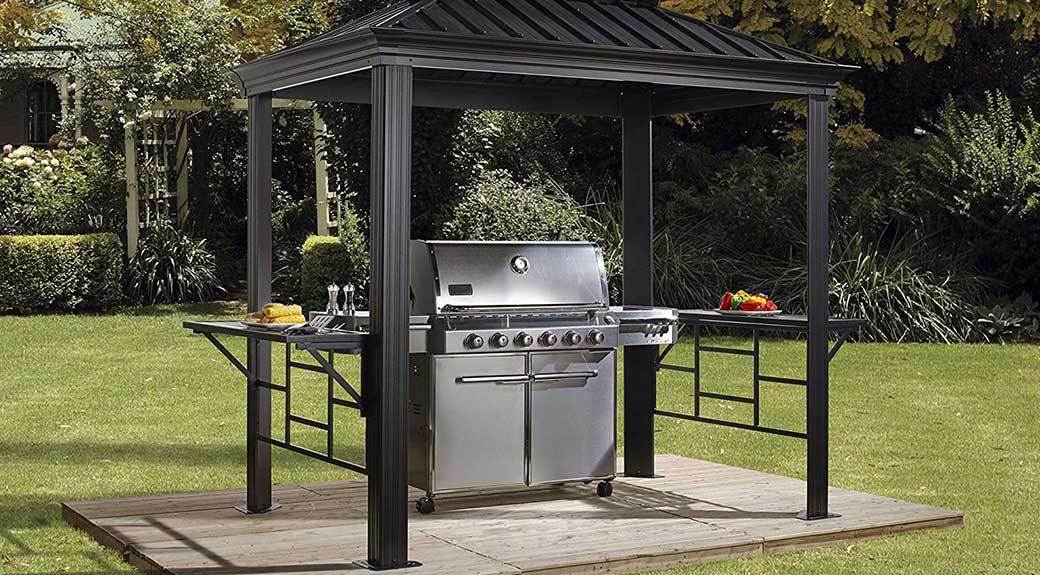 If you want to put a table and chairs in the shade along with the grill, purchase the largest grill gazebo you can afford.

The two main components of a grill gazebo are the frame and the canopy.

Frame: The frame consists of the legs and skeletal structure that the canopy attaches to. It’s usually constructed from steel or some combination of steel and aluminum. An all-steel frame will be heavier but also more durable. As the gazebo will be constantly exposed to the elements, all aspects of the frame and the hardware that holds it together should be rustproof and strong enough to hold up to severe weather. A powder coating on the metal helps to prevent rust and corrosion. A common complaint about some gazebos is rusted nuts and bolts.

Canopy: Canopies can be either soft or hard. Some canopies, both soft and hard, are double-vented to help draw off grill fumes. Most soft canopies are made of canvas, although some are polyester or something similar. It should be water and UV resistant, as well as able to ward off mildew and stains. A flame-retardant canopy is a big plus here, because the purpose of the gazebo is to cover a very hot grill.

Most hard canopies are constructed from metal or occasionally some other rigid material. While these gazebos can be a bit more challenging to assemble (and often more expensive), they tend to hold up much longer than those with soft canopies.

A grill gazebo is a sizable element on your deck or in your backyard. In other words, it stands out, and because of this it should complement your outside living area. Don’t downplay the significance of appearance when shopping for a grill gazebo. You should be happy with both the physical design and color.

Grill gazebos vary in size from about 8 x 4 feet to 8 x 6 feet or slightly larger, and about 8 or 9 feet tall. The larger the size, the larger the grill and other items you will be able to fit under it. Larger gazebos also tend to be more expensive and more difficult to set up, and some can be more difficult to control in windy conditions.

Regardless of the grill gazebo you buy, it’s going to require some assembly, and some gazebos are much easier to put together than others. Even the simplest will probably take two people a couple of hours, and it gets more difficult from there. Some assembly issues to watch for include the following:

Legible directions. One picture with a couple of scribbled arrows is the working definition of poor instructions. Check that the assembly directions are clear, legible, and in English. Instructions that include both text and illustrations offer the clearest step-by-step directions.

All the parts you need. Count every bolt, screw, and fastener. Missing something? Reach out to the manufacturer.

Holes that align. Some manufacturers are more careful than others. The worst leave you with bolt holes in the frame that don’t match up, forcing you to drill your own.

Once your gazebo is set up, it shouldn’t need much in terms of maintenance. Check the bolts and other fasteners holding the gazebo together every once in a while to verify that everything is secure. Before purchase, you should also check that the canopy and other elements can be easily cleaned of pollen, sap, grease, and dirt by wiping or hosing down.

Does your grill gazebo include shelves? Most do, usually in the form of one halfway up either side. These can be a handy way to hold plates and beverages, in addition to spices and meats waiting for the grill. Metal is the primary shelving material, although some are constructed of glass, which can be an attractive decorative element in addition to being functional.

LED lighting is increasingly common in grill gazebos. These lights, usually one to four mounted to the underside of the canopy, can be a big help if you do much grilling after dark. Higher-priced options often include a remote to control the lighting.

Other common elements that come with grill gazebos include the following:

Tool hooks: For hanging grilling tools
Bottle opener: Mounted to one of the gazebo legs
Side baskets: For storage
Spice rack: For storing your secret grilling spices

As mentioned, grill gazebos range from modestly priced to expensive, and there generally isn’t a big selection in the middle.

Simple grill gazebos start around $100 to $150. These are typically smaller, with lightweight canopies and occasionally lighting or other extras. One big plus at this price range is that you can usually find a replacement canopy for these gazebos for around $50, which can greatly increase their lifespan.

Grill gazebos that cost around $1,000 and up are generally much more durable, with hard canopies, larger footprints, and a variety of extras, such as remote-controlled lighting and additional storage. 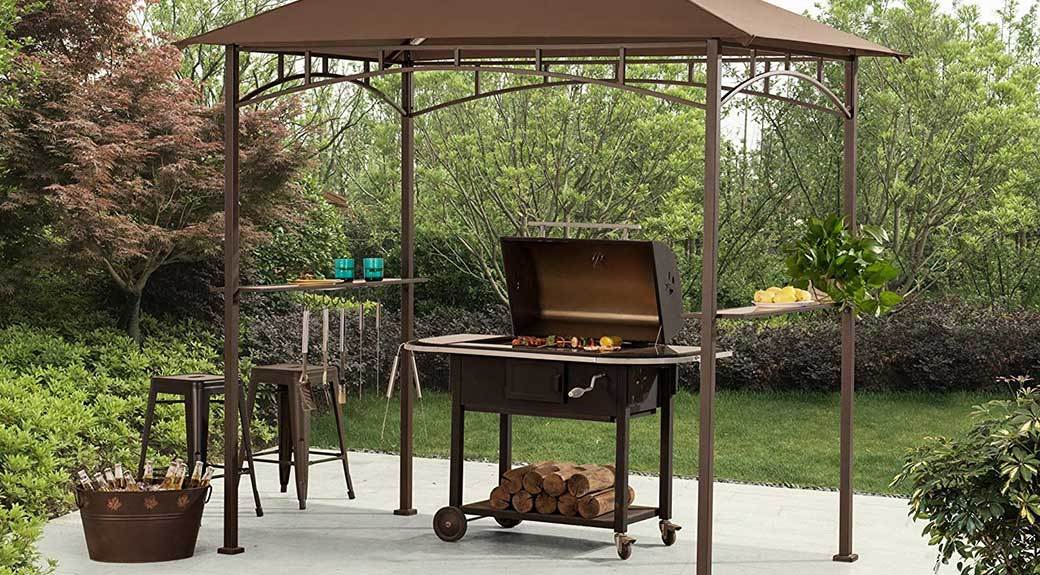 A grill gazebo can be a fairly significant purchase. As such, it’s advisable to note what type of warranty a manufacturer offers, if any.

Q. Can a gazebo be anchored to protect it against wind damage?

A. This varies from one gazebo to another, and it also varies depending on the surface your grill gazebo is sitting on. While few of them ship with anchors, such as sandbags or weights, some do have holes in the legs that allow you to secure them to a deck with screws or bolts or other surfaces with stone/concrete anchors. You can also purchase weighted anchors to use with your grill gazebo. Weighing down the legs is particularly important for a gazebo with a lighter canvas or polyester canopy because these are especially at risk of either being damaged or damaging other elements of your property during a storm.

Q. Can I leave my grill gazebo up year-round?

A. While this largely depends on the mildness of your winters, leaving a gazebo up all year is generally not advisable. This is particularly true for gazebos with a soft canopy. Exceptions to this are those models that specifically claim to be all-season gazebos, but you will still need to regularly remove snow from the top of an all-season gazebo so that the added weight doesn’t damage it.

A. A soft canopy is generally the weakest part of a gazebo, and as such it is more likely to wear out long before the frame. Realizing this, many manufacturers sell replacement canopies that allow you to add years of use to your grill gazebo at a fraction of the original price. If this is something that interests you, contact the manufacturer before buying a gazebo to find out if it sells replacement canopies. 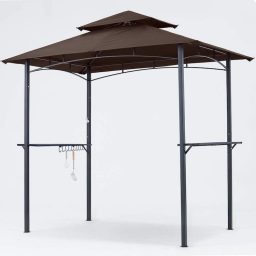 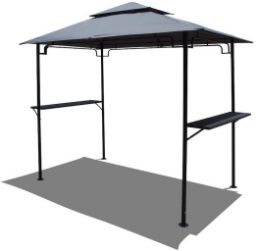 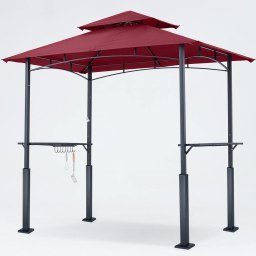 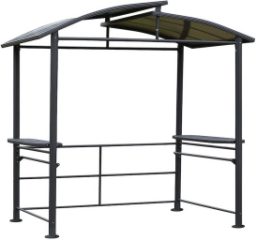 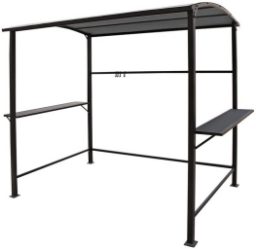 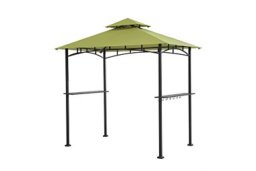 Top Pick
Sunjoy
Grill Gazebo with Canopy
Bottom Line
Not only is this grill gazebo nice to look at, its vented canopy will send smoke up and away.
Shop Now 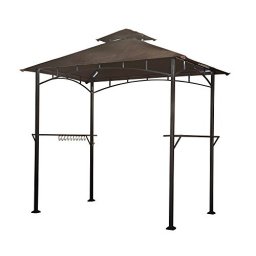 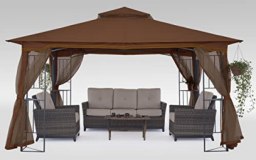 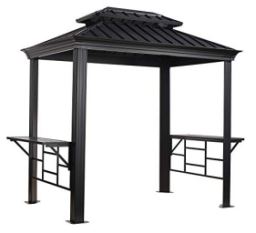 Top Pick
Sojag
Messina BBQ Shelter
Bottom Line
The best choice if you're looking for a strong and sturdy grilling shelter, but prepare to invest both money and time in buying and assembling it.
Shop Now 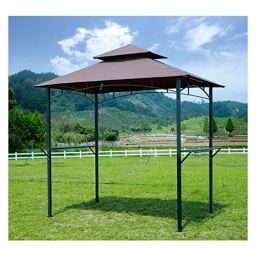 Top Pick
GOJOOASIS
Barbecue Grill Gazebo
Bottom Line
Inexpensive, durable, and loaded with an array of built-in features to make your next cookout a little easier on the chef, this grill gazebo is worth your consideration.
Shop Now