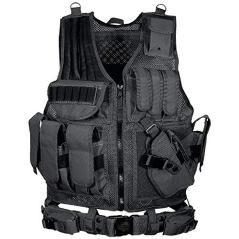 This is a highly popular tactical vest for good reason.

1-size-fits-most design because of girth and length adjustability. 4 total magazine pouches that are universally sized. Back loop for additional carrying options. Made with durable, breathable mesh ventilation. External zippered map or document pouch.

Some customers commented that the zippers broke too easily on this vest. 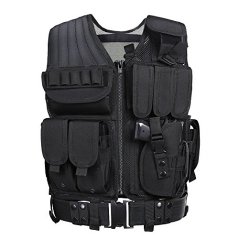 Single size offering fits most due to girth and length adjustments. Mounted on durable, ventilated mesh. Comes with included pistol belt. Comes with a pistol holder that holds most guns and 3 magazine holder pockets.

Customers found the vest uncomfortable and they struggled to find the right fit. 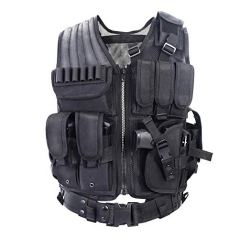 This tactical vest fits nearly everyone.

Comes in S to XXL to fit nearly all sizes. Adjustable shoulder straps. Double-ply breathable mesh makes up the back panel of the vest. 2 document pockets on the inside of the vest. Hook-and-loop closure keeps items secure.

Customers commented that the vest didn't drain well and left a musty smell. 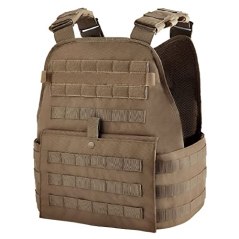 This vest is made in the USA and an Amazon best seller.

Specifically designed for various modular attachments. Comes in sizes M to XL and can be adjusted. Shoulder can be adjusted and has side release buckles. Uses hook-and-loop guides and webbing. Front pocket with a snap closure for maps or documents.

This vest didn't fit as tightly as some customers wanted it to. 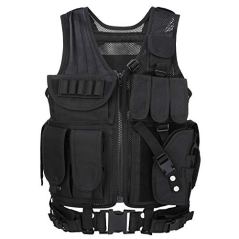 Larger customers commented that this vest is too small for a bigger person.

Tactical vests are popular with a wide variety of users. Originally employed by military and law enforcement personnel, they’re now used by rifle and bow hunters, anglers, hikers, and survivalists, plus fans of Airsoft, paintball, and live-action role-play (LARP). On occasion, the vests are also worn by store personnel.

A good tactical vest offers various levels of protection and can carry all kinds of gear, from phone or radio to sidearm and spare magazines. The big advantage is that it’s all there, right on your chest or back. If needed, it’s easy to reach things fast. It also frees up backpack space and has minimal impact on your movement.

Not surprisingly, there’s an enormous amount of choice. Materials make a big difference in which tactical vest meets your needs, as do various configurations. 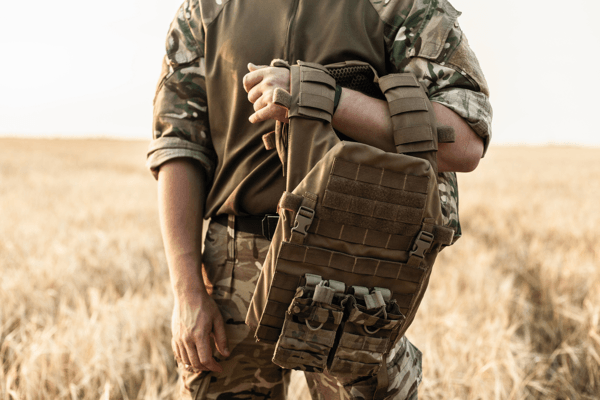 A tactical vest is just one of the body armor options available. You can also get a variety of helmets, arm and leg guards, plus throat and even groin protectors.

Nylon and polyester: Many low-cost tactical vests are made of nylon, polyester, or Cordura, which is nylon-based but may include other fibers. Thickness is measured in denier (D) and can be anywhere from 500 to 1,200 denier. On a basic nylon or polyester vest, thicker material adds toughness, though there can be some loss of flexibility.

Ballistic polyester: Some vests are made of ballistic polyester, which is a woven material invented during World War II to protect pilots from flying shrapnel and bullets. It’s not actually bulletproof, but it is very hard wearing and highly resistant to tears. Other vests have Kevlar added, making them extremely durable. Using these tougher materials, the vests can be made thinner and thus more flexible.

Tactical vest materials can be stab- or spike-proof, but it’s not something you should assume. If they are, they should be described as such. If it’s sold specifically as an Airsoft vest, it might look the part, but physical protection may be minimal.

Mesh: Mesh or breathable fabric is often used in places to provide ventilation and help keep you cool.

Though different sizes are sometimes available, most tactical vests are one-size-fits-all.

Waist: They have either an adjustable cummerbund-style waistband or a belt with snap buckles. Waist buckles are usually quick-release and large enough to be used while wearing gloves, so you can get out of the vest quickly if needed.

Front: The front is often zippered, though not always. Some vests have to be put on over your head.

Shoulder straps: Tactical vests also have adjustable shoulder straps. These often have hook-and-loop fasteners but sometimes buckles. It’s nice if the straps are padded to provide extra comfort. It’s also good if they’re of reasonable width so they don’t dig in when the vest is loaded.

Adjustability: Although the amount of adjustability is usually considerable, there is a limit, and people outside the “average” bracket may struggle to find a vest that fits. Minimum and maximum measurements are often given, and it’s also worth looking at owner feedback for any comments regarding fit.

Personalization: Pockets and pouches may be held on by hook-and-loop fasteners, but quick-release snap buckles are also used. The amount of flexibility varies when it comes to positioning pockets and pouches. It can be a useful feature in that it allows you to personalize your vest. It may also be possible to add accessories. Closures are frequently hook-and-loop, though snaps are also used. Drain holes are a nice addition. The pouches may also be elasticized to hold the contents more securely.

Some tactical vests have a National Stock Number (NSN) indicating that they’ve been bought by the United States Department of Defense, but it doesn’t mean the vests have achieved any particular protection standard.

A few tactical vests have a padded and/or rubberized shoulder area for use as a recoil pad if you’re using a rifle or shotgun. Unfortunately for lefties, this area is almost invariably on the right shoulder.

A rescue handle is usually fitted at the top of the back panel so someone can grab you and pull if you get into difficulty. 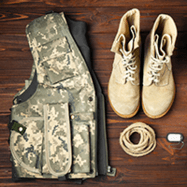 DID YOU KNOW?
Kevlar and Nomex are brand names for super-strong, heat-resistant fibers that may be used to reinforce tactical vests. They’re technically called aromatic polyamides but are better known as aramids.
STAFF
BestReviews

Some tactical vests are purely for protection, but a major benefit of most is their various gear-carrying abilities. However, before you decide to simply go for the one with the most pockets, bear in mind that everything you add increases the weight. A vest normally gives you great freedom of movement, but it won’t if it’s so loaded down you can hardly walk!

Pouches and pockets: Although you can put what you like in them, of course, pouches are usually provided for things like phones, flashlights, and “utilities,” perhaps a pocket knife or multi-tool. The size, number, and arrangement of the pouches vary considerably, and it’s worth taking some time to think about how you’re going to use your tactical vest so you know you’ll be able to carry all the gear you need to.

Internal pockets are sometimes provided, useful for documents or those people who still use printed maps!

Holster: A cross draw handgun holster is a common addition. Many can be detached and alternatively fitted to a belt. Although regularly called “universal,” they are almost always better suited to automatics than revolvers. Additionally, large and long-barreled pistols may not fit well. Bear in mind that when it’s on the vest, the holster is almost always on the wearer’s left-hand side and thus only suitable for right-handed people.

Magazine pockets: These are another inclusion and may take either pistol or rifle magazines. The latter are frequently M4/AR type, though it’s worth checking. There may also be space for shotgun cartridges.

Hydration bladder: We’ve also seen several tactical vests that make provision for a hydration bladder on the back, although the bladder itself is not included, so you’ll need to source one to fit.

PALS: Webbing or loop systems, sometimes called Pouch Attachment Ladder Systems (PALS) may be added to the back of the tactical vest for hanging even more items.

MOLLE: Modular Lightweight Load-Carrying Equipment (MOLLE) attachments may also be used. Originally a way to fit a range of gear to backpacks, it was first designed for use by NATO, and widely adopted by the American and British armies. However, the system is now used by many different manufacturers whose gear may or may not be of a military standard, but they should at least all be compatible.

Many tactical vests are machine washable, usually in cool water (follow the manufacturer’s instructions). But they should never go in the dryer or be hung near a heat source like a radiator or furnace. Allow your vest to air-dry at room temperature.

Inexpensive: The cheapest tactical vests we found cost around $20. Material isn’t always as thick as that on better-quality models, and carrying options may be limited. We’d probably pass on these, especially when you can get a good one for not a lot more.

Mid-range: The vast majority of tactical vests range from $30 to $100. We expect most people can find what they need in this bracket, which covers just about every possible size and feature, short of being bulletproof.

Expensive: Bulletproof tactical vests, not surprisingly, are in a different league. Prices start at around $240 and can exceed $1,000. 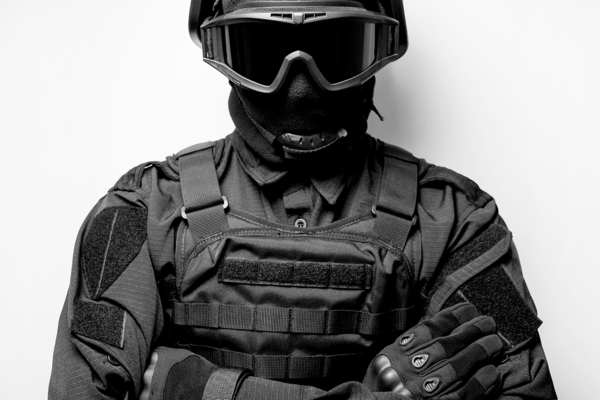 Tactical vests aren’t just for people — there are models for dogs, too!

Q. How can I tell if a tactical vest is bulletproof?
A.
It’s pretty important to check carefully! It should be described as bulletproof (or ballistic), and it should tell you what level of protection it offers. It’s common for vests to protect you from pistol rounds up to a particular caliber (often .38 or .44) but fewer offer protection from hunting or assault rifles.

Some vests, often called “plate carriers,” are not inherently bulletproof but can have soft or hard plates added as an option. You might also see Small Arms Protective Inserts (SAPI), which are ceramic plates designed for use by the U.S. Army that are now widely available. Again, you need to check the specifications. There are several different materials, and these make a considerable difference to the amount of protection offered and to the overall weight. Also bear in mind the shape. The protected area can be a lot smaller than you might think.

Q. Is it legal to buy and wear a tactical vest?
A.
In general, yes, though some restrictions apply if they’re bulletproof. Convicted felons cannot buy that kind. Some states have other exceptions, and increased legislation is always a possibility, so it’s important to check the regulations where you live. For example, Louisiana bans tactical vests on school properties or at school functions. In Connecticut, you can’t buy them online; it must be in person. In most states, using one during criminal activity will result in an increased sentence.

Q. Are “law enforcement” tactical vests actually used by cops?
A.
It’s possible. These garments are sold all over the world. However, calling it a “law enforcement” or “SWAT” vest is really just a way to describe something that’s similar to what a police officer wears. It’s marketing, and it doesn’t necessarily mean that it’s actually used by any particular department. 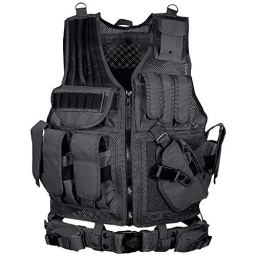 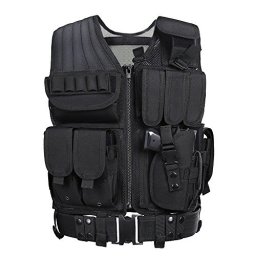 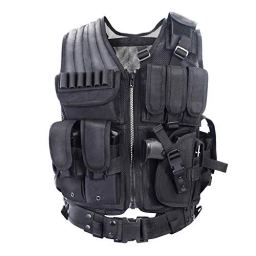 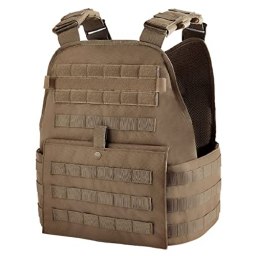 Top Pick
GFIRE
Tactical Law Enforcement Vest
Bottom Line
This vest is made in the USA and an Amazon best seller.
Shop Now 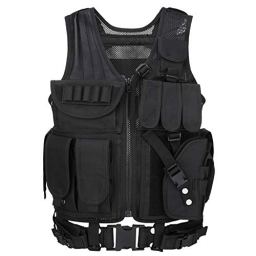