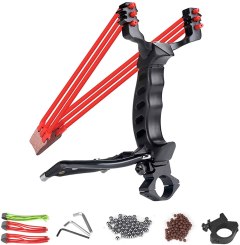 Band lacks accuracy due to size and is missing assembly instructions. 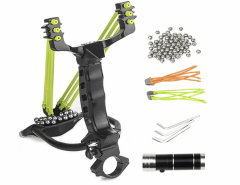 Heavy-duty, die-cast aluminum alloy frame. Handle has grooves so hand is comfortable when you shoot. Features 3-hole rubber band design for plenty of power with each shot. Magnet on support strap for portable ammo loading. 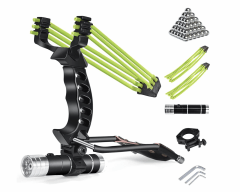 A hunting slingshot that delivers precise shooting at a budget-friendly price.

Includes adjustable wrist brace for use by people of all ages. All-metal slingshot with durable rubber bands constructed to last. Handle grip molded to fit perfectly in hand. Strong enough to hunt rabbits, birds, or other medium-size prey. 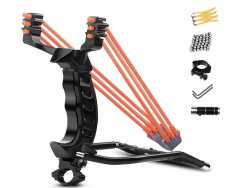 High-end hunting slingshot that is simple to shoot accurately.

Rubber bands tend to wear down and discolor over time. 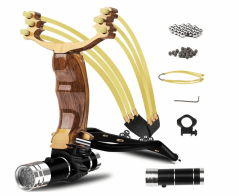 A hunting slingshot that is designed to deliver unmatched strength and durability.

Once considered a toy for kids, the humble slingshot is gaining popularity with those who love the outdoors. It’s no longer just a rudimentary tool built from a Y-shaped tree branch: the modern hunting slingshot is a product of decades of design refinement. Rugged construction and a more powerful shooting ability are hallmarks of today’s hunting slingshot. But as with any seemingly simple device, the devil is in the details.

Personal shooting style, slingshot build, and special features like laser sights mean that finding the right hunting slingshot can be a difficult process of sifting through countless available options. Hunting slingshots are largely geared toward users with experience in slingshot target shooting who want to step up from basic slingshots. But beginners can also start out with a hunting slingshot.

Read through this buying guide to learn the most important elements, options, and accessories to consider when buying a hunting slingshot. Then you can choose a model that best fits your needs. 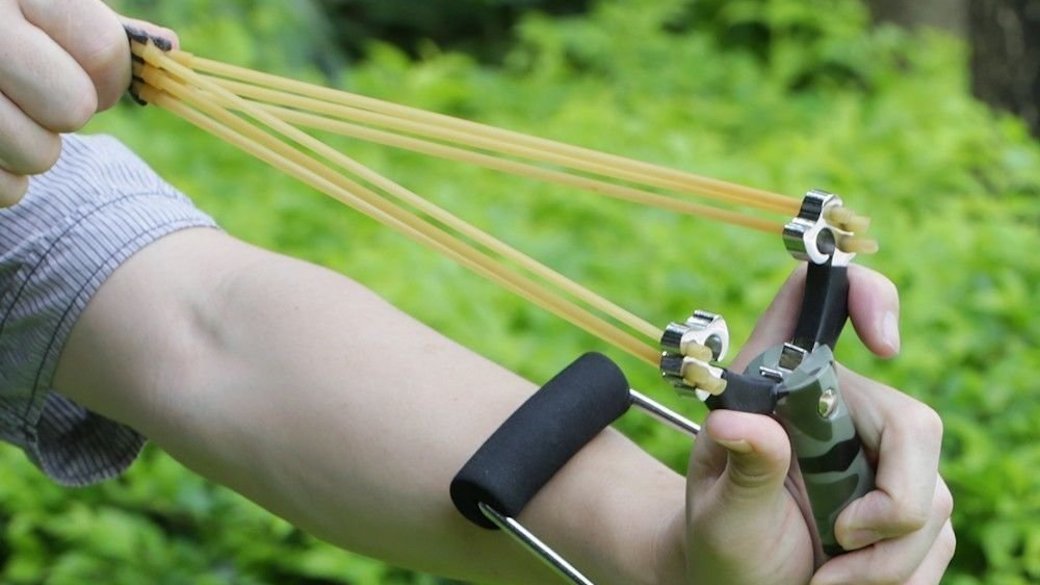 Hunting slingshots commonly use two, three or even four tubular latex bands in parallel to increase a slingshot’s power. But more bands can also make a slingshot harder to draw back.

Regardless of their level of expertise, slingshotters need to focus on a range of characteristics when choosing one of these high-performance projectile weapons for hunting small game.

Accuracy: Clean, accurate shots are important in a slingshot, as with any hunting weapon.

Durability: Hunting slingshot bodies may be made of metal or hard plastic, but whatever the material, they must be tough and durable. The grip handles of hunting slingshots can be constructed of molded metal, wood, or plastic and should be equally durable while also enabling a comfortable grip.

Ease of use: While a slingshot’s basic design is straightforward, modern enhancements and attachments such as laser sights and mounted lights can be confusing for new users. Start with the basics and build from there.

Repairability: Users should be able to make adjustments to their hunting slingshot and replace the bands when necessary.

Unassembly required: In contrast to many products, a hunting slingshot that comes unassembled or partly assembled can be desirable. Assembling a hunting slingshot allows the user to make any adjustments that are necessary as well as building familiarity with the weapon while assembling it.

The handle, or grip, of a hunting slingshot is durable, has some heft, and is either molded to better fit the user’s hand or is shaped to be comfortable during long shooting sessions.

Hunting slingshots often have mounting points for more advanced sights such as fiber optics or lasers. These mounting points are typically at the bottom of the handle/grip or on one of the forks.

The majority of hunting slingshots use tubular latex bands, which are stretchy yet tough and stand up well to the elements. A few brands use flat elastic bands, which are said to have more power and accuracy but need to be replaced more often than tubular bands.

Made of cloth or soft leather, the pouch is a small rectangle where the shooter places the round projectile they will shoot. The pouch is the holding point during the draw, where the ammunition is pinched between thumb and forefinger to keep it in place until the release.

Many hunting slingshots have fold-out or adjustable arm supports. These features provide additional stabilization and greater leverage in hunting slingshots. They work by bracing against the wrist or arm during the draw and release.

Magnetic ammo holders are a convenient feature of many high-end hunting slingshots. The bottom of the grip or arm support is magnetized, so that the spherical metal shot ammo can be attached and quickly accessed by the shooter.

Did you know?
Band weight determines much of the power of the shot when using a hunting slingshot. The heavier the band, the more power is translated to the shot.
STAFF
BestReviews

Bring plenty of ammunition on your hunt. Marbles or hard clay pebbles are fine for target practice. But an actual hunt requires real steel or lead ammo to do the job right. We like the BC Precision’s 3/8-inch Steel Shot Slingshot Ammo Balls made of carbon steel.

Corral your ammunition in an ammo pouch. Keep your extra slingshot ammunition organized with a storage tote like this army green Tactical Molle Magazine Dump Pouch by CREATRILL. This adjustable fanny- or hip-holster bag keeps your backup ammo pellets at the ready.

Always have replacement bands on hand. Don’t cut your hunt short due to a broken slingshot band. Be prepared with extra bands in your pack, like these Barnett 16000 Slingshot Magnum Power Bands.

Eye protection is a must when shooting slingshots. Don’t endanger your eyes while eyeballing your prey or doing your practice shooting. When slingshotting, we like to wear the Honeywell Genesis Sharp-Shooter Shooting Glasses by Howard Leight. These glasses offer no-nonsense eye protection with anti-glare, anti-fog lenses.

Save your hands with slingshot gloves. Keep your hands warm and protect against “hand slap” when the pouch flies through after each shot by wearing protective hunting gloves. We like the Antiskid Design for Slingshot Shooting Gloves by TOPRADE, which leave three fingertips exposed on each hand so you can draw back your slingshot with nice touch.

Inexpensive hunting slingshots can be found as low as $10 to $15, though models in this range tend to use lower quality elastic bands.

In the $15 to $25 price range you will find the widest range of hunting slingshots, and more of them will include accessories like extra bands or optional sights.

Expect to pay $25 to $50 for the sturdiest slingshots, many with stainless steel construction. Slingshots in this price range will feature the best quality materials, construction, and included accessories. 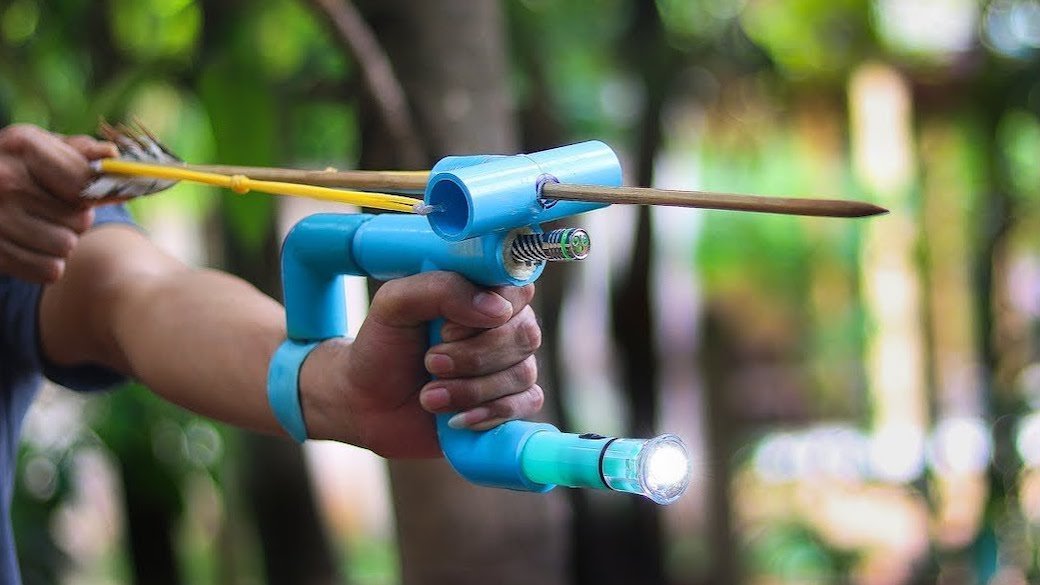 Using the recommended ammunition for your hunting slingshot and mission will reduce the risk of damage, fork strikes, and other issues that can shorten the life of slingshots.

Q. The band on my hunting slingshot is beginning to deteriorate. Can I continue to use it?

Q. Is a flat band better than a tubular band for hunting slingshots?

A. Flat and tubular bands have different characteristics — some desirable, others not so much. For example, flat band enthusiasts like the fast draw and release. Users say that flat bands increases accuracy, but they find the more frequent band changes a bit annoying. Tubular bands are much longer lasting. But it takes a little more time to master aim, draw, and release techniques when using tubular bands. You’ll find slingshot users who are firmly entrenched in one group or another and others who readily switch between band types.

Q. I seem to hit the slingshot fork as often as I hit the target. Why does this happen so often?

A. Review your aiming and release technique. Have a friend take video of you shooting using the hunting slingshot to find out if you’re shifting in any way just before the release. If you’re using a slingshot with an arm/wrist support, make sure the support is secure and doesn’t jiggle or shift on release. One way to improve your technique is to practice using a lighter weight band and switch back to heavier bands when hunting.

Q. Is there a preferred way to grip the slingshot?

A. There is no universal gripping technique for hunting slingshots. The handle design can limit grip options. The classic “hammer” grip, where the user holds the slingshot by the handle, is a good place to start. Those using a slingshot without an arm support may prefer a “fork-support” grip, where the fingers are braced higher up on the prongs. If the user wraps their thumb around a fork, that’s called a “pinch” grip. Some hunting slingshots are designed with fork-support and pinch grips in mind. Variations in band weight and draw length may also determine the type of grip used. 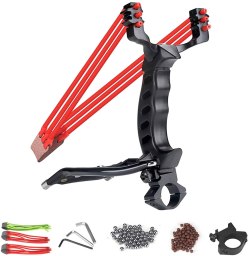 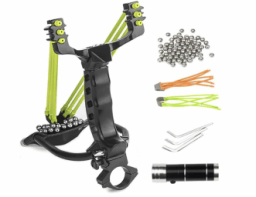 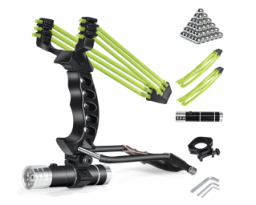 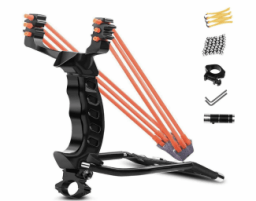 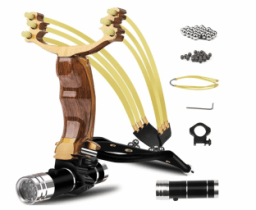