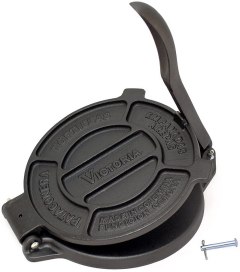 Pre-seasoned cast iron construction takes much of the work out of pressing tortillas.

Heavy cast iron lid makes pressing easier. Can also make pizza crust. Well-engineered; surfaces are perfectly flat. Some consider the Victoria to be the Cadillac of tortilla presses, but be aware of its additional weight. Naturally nonstick.

Heavier than average tortilla presses. On the expensive side. 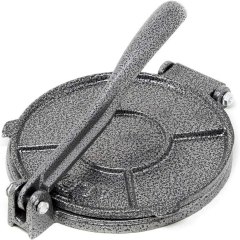 This is an affordable yet reliable tortilla maker that comes with a durable exterior for tougher projects.

Can be difficult to operate, especially for long periods of time. 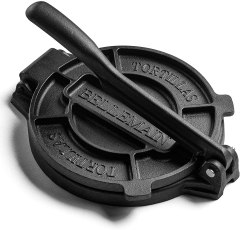 This professional-quality tortilla maker remains a good choice for those living by themselves.

Evenly applies pressure so that cookers can enjoy smooth and flat tortillas with each press. Reinforced by heavy iron for long-lasting operation. Compact size is an excellent choice for those needing single servings or smaller quantities.

Tortillas don't get as thin as some users would have preferred. 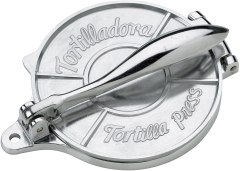 Lightweight compared to cast iron models. Compact and easy to store. Can be used to make pita bread and mini-pizzas. The finished tortillas may not be as large as burrito versions, but they're consistently thin enough for chips or shells.

May be too small for some users. Requires considerable pressure for best results. 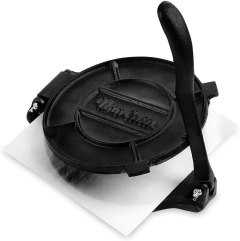 It's larger than a typical tortilla maker, making it an excellent choice for making large quantities of food at one time. Flattened surface goes down easily to create a smooth tortilla. Comes with 100 sheets of parchment paper, so chefs can started right away.

Bolts are on the thinner side, which may present some frustration.

With the increase in popularity of Mexican cuisine, many home chefs now want to add tortilla making to their repertoire. Whether you’re looking to cook authentic Mexican cuisine, or you’re a DIY chef who wants to know every ingredient in your food, a tortilla maker can be a fun and healthy addition to the kitchen. Making good tortillas takes a combination of the right recipe, skill, and a decent tortilla maker.

Tortilla makers, sometimes called tortilla presses, can be made of anything from wood to cast iron, and are intended only for corn tortillas. Knowing which type and style are right for you will take some research, but you’ve come to the right place. 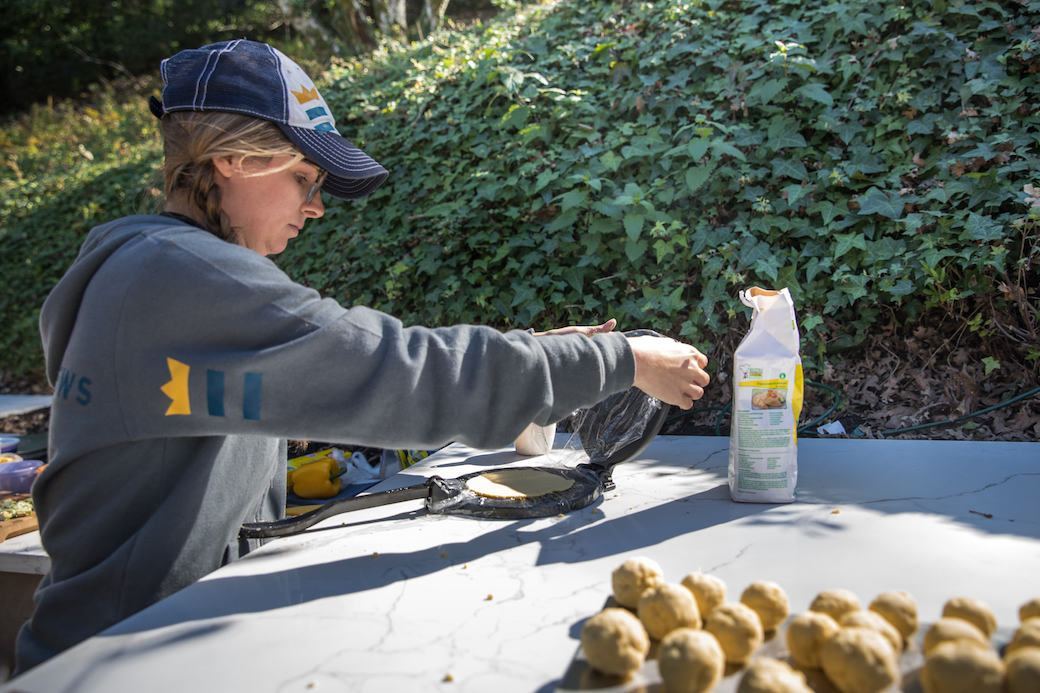 When fully cooked, a tortilla should puff slightly, but still be flat enough to be rolled.

The weight of cast iron makes it a natural choice for a tortilla maker, as the cast iron does a lot of the pressing work for you. However, that same weight can make this type of tortilla maker cumbersome to move around, and cast iron needs to be seasoned and cared for correctly. When properly maintained, cast iron can last for decades, making it a good investment.

"Tortilla presses are meant to make corn tortillas. Flour tortillas, or any tortilla that contains gluten, must be rolled to properly break down the gluten. "
STAFF
BestReviews

Aluminum tortilla makers are easier to care for than cast iron, but they don’t have the advantage of weight. Aluminum is quite light, and it takes extra work to press the dough. Be sure you get one with a sturdy handle because you’ll have to put a lot of pressure on it to get a thin tortilla.

Many people like the look and feel of a wooden tortilla press, and they are still commonly used in Mexico. These presses have a larger footprint than a cast iron or aluminum model. Durability can be an issue with wood tortilla makers which can warp, split, or crack after a few uses. They come in all kinds of woods, but for a truly superior tortilla maker, you want a hardwood, like mesquite or oak.

Expert Tip
To maintain a wooden tortilla press, you occasionally need to sand the interior. You also should periodically rub down the exterior with wood-block oil.
STAFF
BestReviews

These tortilla makers are inexpensive but that’s really all we can say about them. They don’t have the weight or durability to make a good tortilla press. Most of the time, using a rolling pin would be more effective.

Did you know?
Cast iron tortilla makers that are pre-seasoned will come at a slightly higher price. However, you can season your own with cooking oil.
STAFF
BestReviews

Size of the tortilla

Tortilla makers can make corn tortillas anywhere from six to twelve inches in diameter. If you primarily make tacos, a six-inch tortilla maker will probably do. However, if you want to make burritos or something larger, an eight-inch model or larger might work best.

Tortilla makers, especially wooden models, can require a big footprint in your kitchen. They can also be bulky and heavy. You’ll need to really think about how much space you have on your kitchen counter and in your cupboard. Cast iron tortilla makers are somewhat smaller, but they are heavy to move.  Aluminum models are usually compact and lightweight, but less effective at making tortillas.

Thickness of the tortilla

Corn tortillas are usually around ⅛ of an inch thick; some tortilla makers can make an even thinner tortilla. Not all models are made equal. Lightweight presses will have a hard time getting the dough thin enough — they’ll require more manual labor from you if you want thin tortillas.

Expert Tip
Put a barrier between the press and the tortilla dough to prevent sticking. Plastic wrap or a plastic bag works well because you can reuse them until you’re done pressing your batch of tortillas.
STAFF
BestReviews

Cast iron requires special care and periodic seasoning to prevent rust. Soap should never be used, as it can remove the seasoning from the plates. Aluminum does not require extra care but you’ll still need to have a plastic barrier between the plates and the dough to prevent sticking. Some electric models come with a nonstick surface that’s easy to keep clean. Whatever type you purchase, read and understand all cleaning instructions before the first use.

Some electric models have a light that lets you know the tortilla maker is on and ready to go. Many of these same models have a ready light that indicates with the plates have reached cooking temperature.

Did you know?
In Mexico, a “tortilladora,” or tortilla press, has a basic design that includes a top and base, with an attached handle.
STAFF
BestReviews

Expert Tip
To save space in your cupboard, look for a tortilla press with a foldable handle. This makes the press much more compact when not in use.
STAFF
BestReviews

Tips for using a tortilla maker 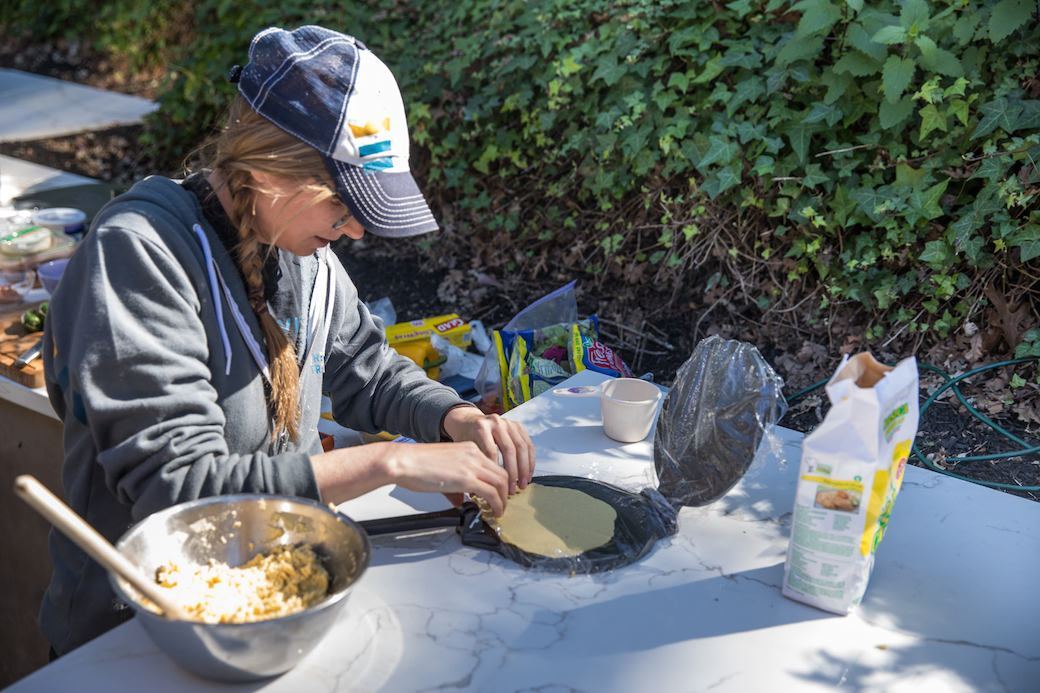 Commercial grade tortilla makers are often made of heavy steel, and can make tortillas that are ten to twelve inches in diameter.

Q. When it comes to cast iron, is there a difference between the tortilla makers that are expensive and those at the bottom of the price range?
A.
In general, there isn’t much difference between an expensive cast iron tortilla maker and one at a lower price range. However, coatings on the outside do make a difference in the longevity of the tortilla maker and may add a few dollars to the price. The important thing is to find one that has a good, hefty weight. Weight is what makes a cast iron model stand out from other materials.

"In the Mexican tradition, a person who makes tortillas passes the dough back and forth between his hands until he’s formed a perfectly round tortilla. "
STAFF
BestReviews

Q. Can you cook tortillas with a tortilla maker?
A.
Tortilla makers are presses, rather than cooking devices. They are meant to flatten the dough before cooking. The exception to this rule are electric tortilla makers, which are designed to take on the whole process from pressing to the finished tortilla. 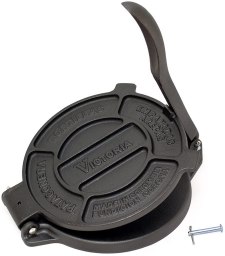 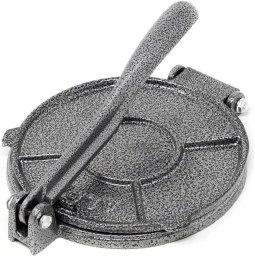 Best Bang for the Buck
Alpha Living
Cast Iron Tortilla Press
Bottom Line
This is an affordable yet reliable tortilla maker that comes with a durable exterior for tougher projects.
Shop Now 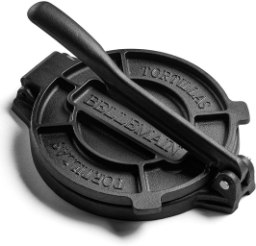 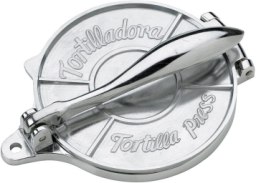 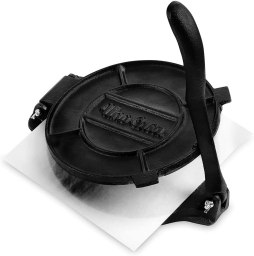 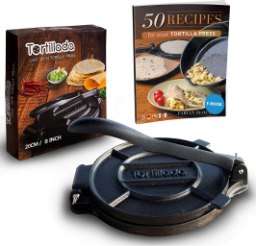 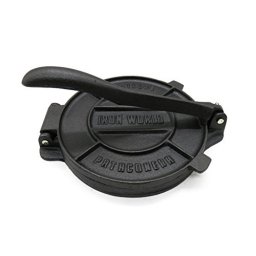