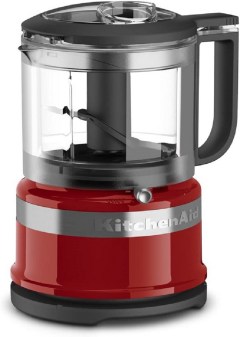 Although it's not the cheapest on our list, it offers enough power to get the job done quickly and smoothly.

Highly praised for its reverse spiral action blade, which ensures uniform chopping among a wide range of food types. Comes in a range of attractive colors.

It's loud, even for a food chopper. 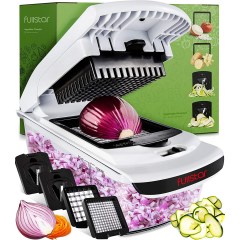 After testing, we think large families and anyone who regularly eats vegetables will appreciate this model. 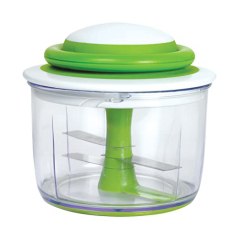 This onion chopper works like a manual food processor, giving you more control over the size and texture.

Some parts are not dishwasher-safe and are difficult to keep clean. 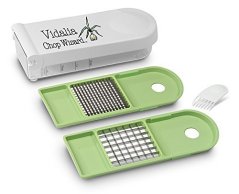 Dices onions incredibly finely, but you must use it with care.

Must cut onion and other veggies into smaller pieces first. Trying to chop a whole onion is likely to break it. 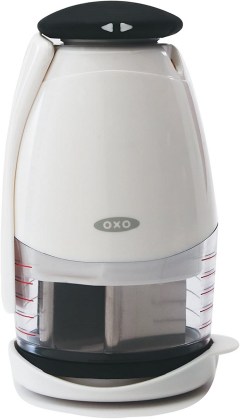 Earns praise for accuracy. Sports a convenient pullout display that's easy to read even when weighing large items. Has an attractive, industrial appearance.

Can be slow to recalculate when adding or removing ingredients. Control panel has been reported to quit working if liquids are spilled on it.

We all know we should cook dinners from scratch and eat plenty of fruits and vegetables to stay healthy. But after a long day, sometimes all that prep work of chopping and dicing seems like way too much effort, and we just order ourselves a pizza instead!

And, of course, there are those for whom chopping fruits and veggies is a physical impossibility. Some people genuinely don't have the strength or energy to stand long enough to prepare dinner.

A food chopper could make a huge difference in your eating habits. These handy gadgets take what could have been a half-hour chore and help you get it done in a couple of minutes, so getting a veg-heavy meal on the table doesn't seem like too much of an ordeal. 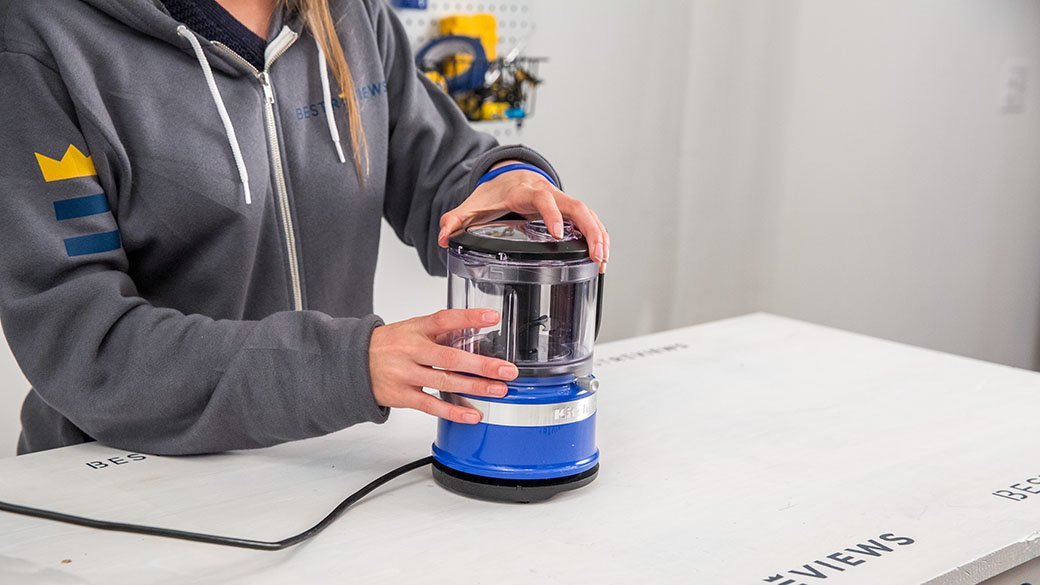 Studies show that 80% of Americans eat less than the recommended daily amount of vegetables and fruit. However, a food chopper could make it more convenient for you to prepare and enjoy these foods.

Food choppers come in two distinct varieties: manual and electric. Let's look at both and examine their strengths and weaknesses.

These are food choppers that are operated by hand –no power outlet needed. They normally require a downward pushing motion to work, but some varieties have a pull cord.

Electric food choppers are similar to miniature food processors, but they’re more basic and don't have as many functions.

Did you know?
Food processors can struggle to chop smaller amounts – like only one or two cloves garlic. There’s just not enough volume for the food processor to work effectively.
STAFF
BestReviews

We can't deny that electric food choppers are similar to food processors, but some differences do exist.

"If you want to involve the kids in meal prep, look for a food chopper without exposed blades."
STAFF
BestReviews

When it comes to food choppers, there are a surprising number of things to keep in mind. Below are some of the main considerations you should factor into your purchasing decision, such as electric or manual, ease of use, and speed settings.

One of the first things to decide is whether you want an electric or a manual food chopper.

If you want to be able to use it when camping or traveling, or you simply don't want another electrical appliance, a manual food chopper is probably right for you.

If power and ease of operation are at the top of your list, an electric food chopper is probably the way to go.

Some food choppers can prepare very little at one time; others have a much larger capacity. A food chopper that holds 3.5 cups of food would be considered a large-capacity chopper. You're more likely to find electric food choppers that hold this much at once.

In the course of our research, we found food choppers that hold as little as five tablespoons of chopped food at once. If you're cooking for just one or two people, you might prefer a small-capacity chopper. You're more likely to find manual choppers with such a small capacity.

We've all had kitchen gadgets and appliances that are so awkward to clean that we eventually give up using them. Some food choppers are easy to clean thoroughly, whereas others are a bit more of a chore. You may need to check customer reviews if ease of cleaning is especially important to you. The product list at the top of this page is a great place to start!

All of the products listed in our product list should be easy for an able-bodied adult to use. However, if you're looking for something that can be operated with no more than the press of a button, we recommend an electric chopper with a start button.

Varieties that are operated with a pull cord are also fairly easy to use, even for individuals with limited manual dexterity.

BPA is a substance found in plastics that can leach into your food. Human exposure to BPA has potentially been linked to some health issues.

We can't say whether having a BPA-free food chopper would make a difference in your overall health, but if it's something that concerns you, you may want to avoid it. Some food choppers are advertised as being BPA-free. If it’s not clear in the product literature, you may want to contact the manufacturer to find out for sure.

Most electric food chopper have two speed settings: high and low. This is all you really need. The high speed will allow you to purée ingredients or quickly achieve a fine dice. The low speed will give you a chunkier chop.

Given that you are the power source, manual food choppers don't have speed settings.

You needn’t break the bank when it comes to buying a food chopper. Even if you go for a big-name electric food chopper from a heritage brand, it will likely only set you back between $30 and $50.

If you want a basic but effective manual chopper, you can pick up a decent one for about $15. 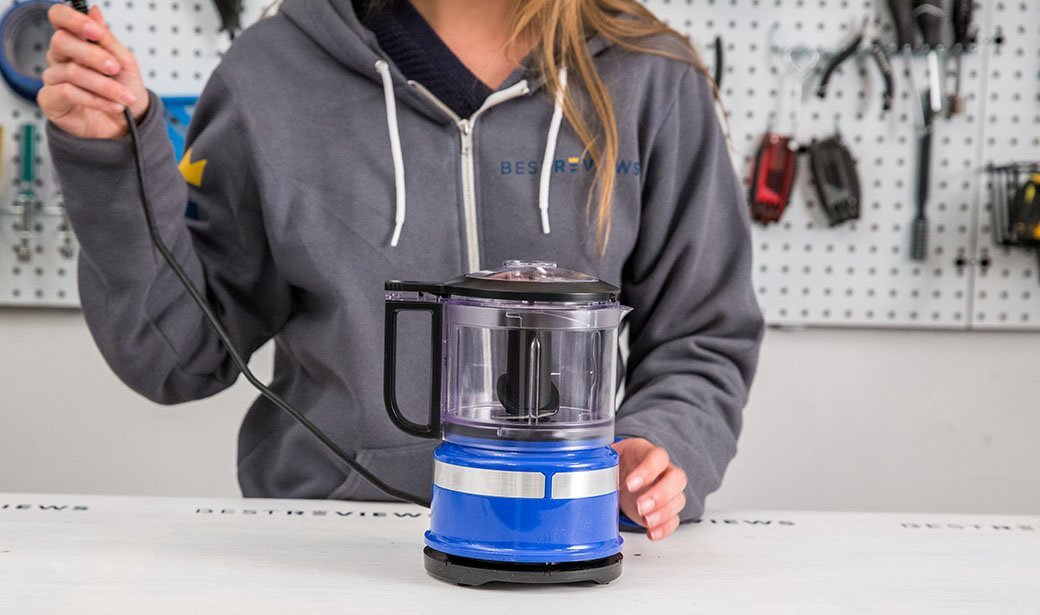 Although the FDA has declared BPA safe in low doses, it has been linked to health concerns, including high blood pressure and issues in the brain. As such, many people try to avoid products that contain it.Food choppers are very commonly made with plastic, so check if the product of your choice is BPA-free or not.

Q. Can you chop anything in a food chopper?

A. You can't chop every food in a food chopper, but most products are fairly versatile. They tend to be best suited for chopping fruits and veggies, but some choppers can pulverize softer produce, such as tomatoes or stone fruit, rather than chopping it.

Some brands can also chop bread (for breadcrumbs), cheese, nuts, and cooked meat.

The most powerful models are good for making dips and sauces such as pesto, hummus, salsa, and guacamole. Some can even make nut butters and grind coffee.

A. Not all food choppers are dishwasher safe, but many are. While we wouldn't necessarily recommend choosing your chopper based on this feature alone, it's definitely an added bonus, especially if the unit has nooks and crannies that are tough to clean by hand.

Q. What are the benefits of using a food chopper?

A. The following are just some of the benefits of using a food chopper. 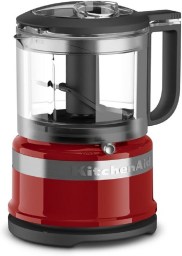 Best of the Best
KitchenAid
3.5-Cup Food Chopper
Bottom Line
Although it's not the cheapest on our list, it offers enough power to get the job done quickly and smoothly.
Shop Now 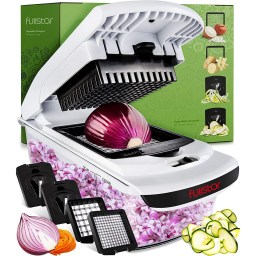 Best Bang for the Buck
Fullstar
Vegetable Chopper, 4 Blade
Bottom Line
After testing, we think large families and anyone who regularly eats vegetables will appreciate this model.
Shop Now 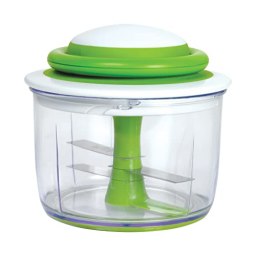 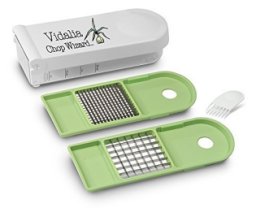 Top Pick
Vidalia
Chop Wizard
Bottom Line
Dices onions incredibly finely, but you must use it with care.
Shop Now 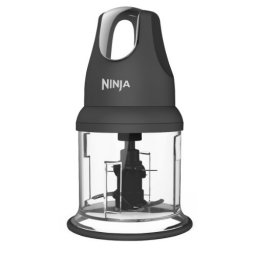 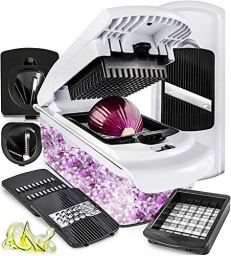 Top Pick
Fullstar
Vegetable Chopper, 7 Blade
Bottom Line
With 7 interchangeable blades, this chopper can cut onions and many other vegetables. Our tests found it large, versatile, and easy to use.
Shop Now