Compatible with other SodaStream bottles and flavors, this package includes all you need to begin making your own sparkling beverages.

You have to buy SodaStream specific Co2 bottles, making accessibility in a pinch difficult.

The bottle, made of plastic, is not as nice as expected. 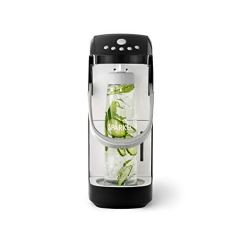 A unique option that uses individual carbonators and allows you to customize your bubbles.

Only the brand’s carbonators can be used with this beverage system. 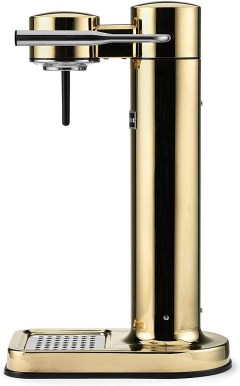 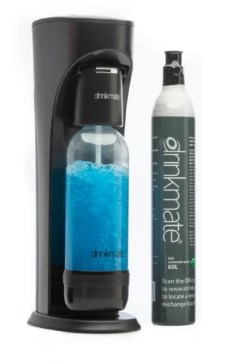 This soda machine requires no electricity to use. It's compatible with SodaStream carbon dioxide canisters and includes a 1-liter BPA-free bottle. This model is capable of carbonating more than just water.

This product does not include a CO2 canister – one must be purchased separately before using.

For those of us who love our carbonated drinks, a soda maker is a worthwhile purchase. You can save money on a chilled glass of your favorite beverage by making your own sparkling water, seltzer, tonic water, or soda pop at home. Using carbon dioxide cartridges, tablets, or pods, soda makers simply add carbon dioxide to still water. You can then add flavored syrup to make soda.

When you’re looking for a soda maker, consider its size, ease of use, cleaning, and power. Some soda makers require an electrical outlet, while others may just use the pressure from a carbon dioxide cartridge mix. Consistent quality is important too, along with the ability to control carbonation levels, so you won't be disappointed by a lackluster fizz.

We look at soda makers that use cartridges to carbonate the water as well as dissolvable tablets and pod systems. Cartridges allow users to control the concentration of carbonation, whereas the other two systems don’t. 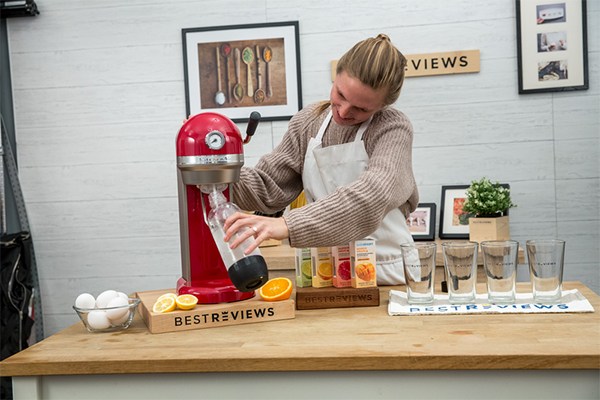 We note the size of each soda maker’s carbon dioxide cartridge. The larger it is, the more soda it can create. Notably, some soda makers only accept one cartridge size. 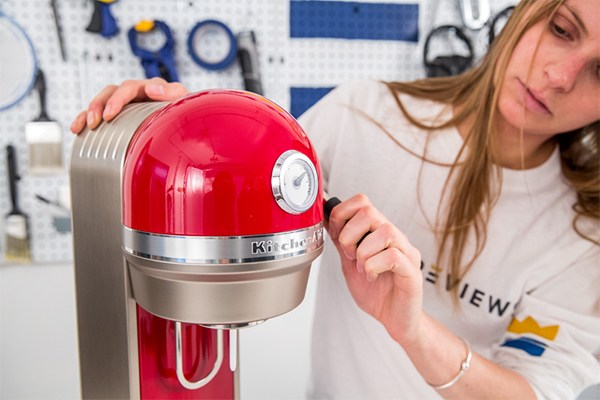 We look for soda machines that allow consumers to select the amount of carbonation they want via an on-screen menu, buttons, or LED display. 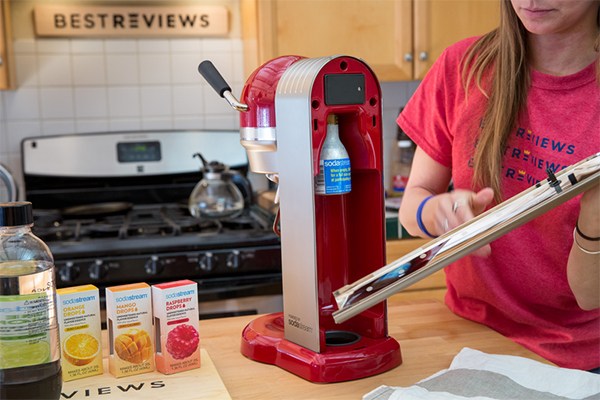 Since some soda makers are easier to use than others, we assess each machine to evaluate how easy it is to attach a bottle, replace cartridges (or other systems), and set it up. 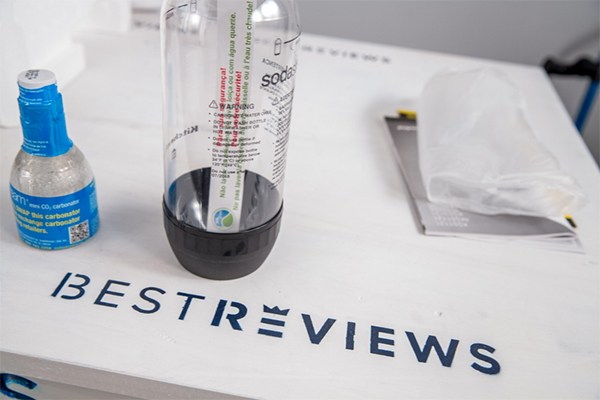 Both battery-powered and electrically powered soda machines are available. We investigate each type of machine to find the best. 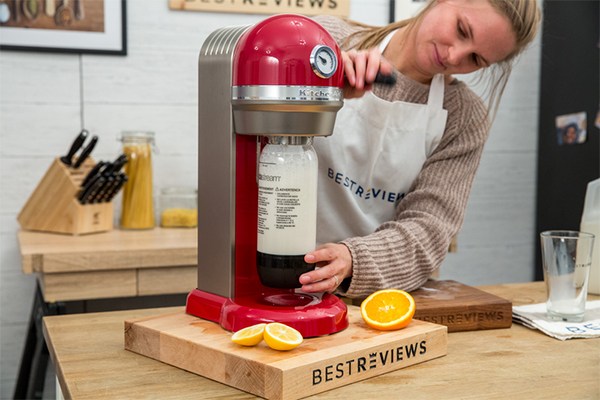 We consider the amount of time it takes each machine to complete the carbonation process, as this varies by machine and model. Some machines can carbonate in 30 seconds. Others take three to four minutes.

When researching soda makers, we learn about the types of drinks each can make. Most machines can make club soda, sparkling water, and tonic. 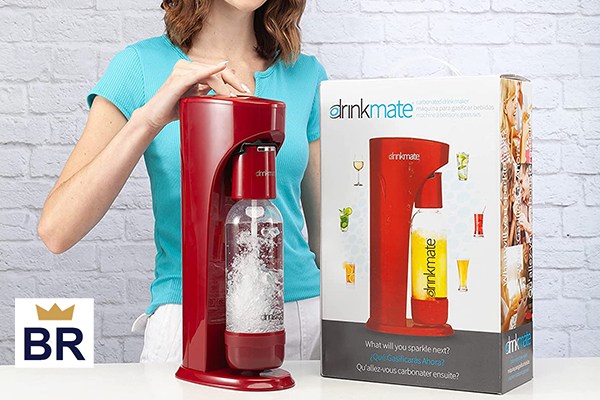 We appreciate soda machines that come with reusable glass bottles. This environmentally friendly option is convenient because you always have the right bottle size on hand.

We note the cleaning process of each soda maker in our research, asking how easy it is to take apart and clean. Bonus points go to soda makers that are dishwasher safe. 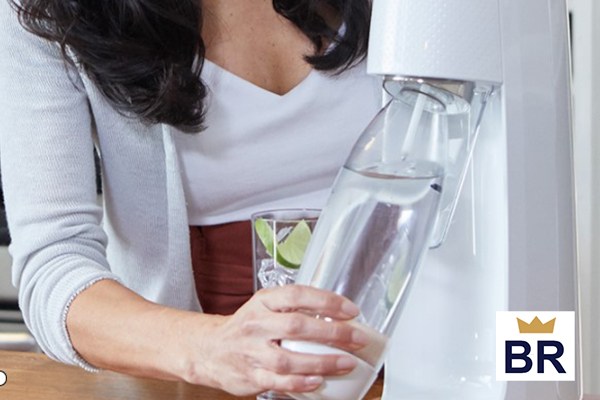 We think about the size of each soda machine and whether a consumer might prefer to store it on the counter or in a cabinet.

You can use tap water as a base for the soda, but you’ll need to buy syrups for flavored soda.

Depending on the type of soda machine you own, you’ll also need to purchase carbon dioxide cartridges, tablets, or pods to inject the carbonation into the water.

Expert Tip
To maintain the fizz in your soda longer, keep the lid closed whenever not drinking it, and keep it refrigerated.
STAFF
BestReviews

Depending on its size, a single carbon dioxide cartridge can create anywhere from one quart to fifteen gallons of sparkling water. You may suppose a larger cartridge would be more convenient because you wouldn’t have to replace it as often. However, some soda makers only accept one specific cartridge size.

A few soda makers use dissolvable tablets instead of a cartridge. Still others use a pod system similar to that of a single-serve coffee maker. If you select a soda maker that uses a tablet or pod system, understand that you won’t be able to control the concentration of carbonation in your final product.

The more carbon dioxide you use, the more “bite” you’ll taste in your sparkling water. A quality machine allows you to personally select the amount of carbonation you want. The machine may require you to choose from an on-screen menu or press a button representing a specific concentration. Or, it may let you know how much carbonation is present via an LED display.

The time required to complete the carbonation process varies depending on the machine. Some soda makers can inject carbon dioxide in about 30 seconds; others require three or four minutes. In general, the less carbon dioxide you use, the less time it will take to carbonate the water.

All fizzy drinks are not created equal. Of the different types that are available, most can be created with a soda-making machine.

To create club soda, you’ll usually be adding potassium bicarbonate to tap water. This process is not something most soda makers can do. You can also add other ingredients, like sodium citrate, to create different flavors of club soda.

Both seltzer and sparkling water consist of carbon dioxide mixed with water. No flavoring or other minerals are added to this type of water. Soda makers can create this beverage.

If you want to create orange soda, cola, or fizzy water of another flavor, you must first create carbonated water with your soda maker. Then, you must add sweet, flavored syrup to the drink.

Did you know?
You could potentially save a little money on a new cartridge by exchanging your empty carbon dioxide cartridges for full ones. The old cartridges are recycled.
STAFF
BestReviews

Some soda makers require more counter space than others, and some stand taller than others. Before choosing a machine, make sure its dimensions will fit your available space.

Some soda makers require electrical power to inject carbon dioxide into the water. These machines must be plugged into a wall outlet.

Other units, like the SodaStream Jet Fountain in our product list, don’t need electricity; pressure from the carbon dioxide cartridge mixes the sparkling water. Soda makers that don’t require electricity may include a battery to operate LED lights.

Of course, you’ll want to clean your soda maker in between uses to avoid the hazardous buildup of bacteria or mold. Notably, some machines are easier to take apart than others, and some require hand washing because the parts aren’t safe in the dishwasher.

Hands on: carbonating everything in a soda stream

Although a soda maker can be a fun appliance to have in your kitchen, don’t automatically assume you’re going to save a bunch of money by using it. Your costs will include the purchase of the machine, replacement cartridges, and syrups. If you think you’re going to be able to save money by making your own cola at home (versus getting bottles of soda or cola at the store), you could be disappointed.

You could pay anywhere from $50 to $400 or more for a soda maker. Machines that allow you to control the level of carbonation cost more, as do some name-brand appliances.

Expert Tip
Do not under- or over-fill the bottle with water when making soda. One can cause the gas to fill the empty part of the bottle rather than carbonating the water, while the other can make the fizz spill out all over your countertop.
STAFF
BestReviews

A cheap soda maker may appeal to your wallet initially, but in the long run, it may carry higher operational costs. We advise potential buyers to keep these tips in mind:

Did you know?
If your soda maker can only use cartridges made by the manufacturer, you could damage your machine by using a cartridge from another manufacturer.
STAFF
BestReviews

Soda makers are rather simple pieces of equipment, but you can make the most of your machine by observing these tips and tricks. 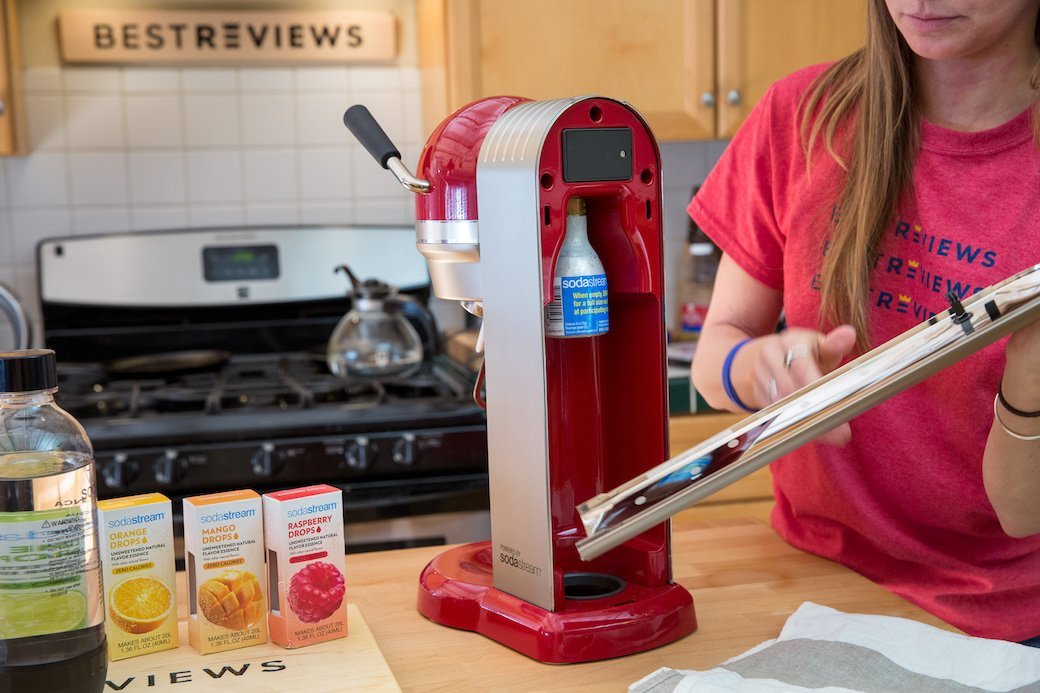 If you buy a soda maker from an established brand, you’re likely to have an easier time finding replacement cartridges.

Q. What’s the most important feature of a quality soda maker?

A. Having the ability to choose and adjust the level of carbonation in your beverage is perhaps the most useful feature in a soda-making machine. This is important because the concentration of carbonation in the water greatly affects the way the sparkling water tastes. However, a machine with this capability tends to cost more.

Notably, you cannot control the degree of carbonation with a machine that uses tablets or pods.

Q. Is a soda siphon the same as a soda maker?

A. No, these are different devices.

Two types of soda siphons are available for purchase. One type is a bottle that contains pre-carbonated water. (Some people call it a seltzer bottle.) Another type of soda siphon is a bottle of tap water with a plastic top screwed onto it. The plastic part contains a small carbon dioxide cartridge that carbonates the water as you expel it from the plastic siphon.

Most soda makers can create far more carbonated water at a time than a soda siphon.

Q. How long does a soda maker last?

A. As long as you keep the parts of the machine cleaned properly, a soda maker should last several years. Most manufacturers recommend a cleaning schedule for you.

That said, a machine that’s made of metal will probably last longer than one made of plastic. Metal options include aluminum and stainless steel. The KitchenAid Sparkling Beverage Maker on our list is made of premium die cast metal. It costs more than some other options, but if you’re really into making your own soda, this could be the right option for you.

Q. Can I use any bottle with my soda maker?

A. Unfortunately, no. The bottle needs to be able to fit inside the machine. If it doesn’t fit properly or is loose in the machine, the process of adding carbonation may knock the bottle out of place. This could result in water leakage and a significant mess.

Some bottles must be screwed into place. If you buy a product like this, the bottle shipped with the machine should have the correct threads. Other types of machines use a snapping mechanism to fit the bottle into place. 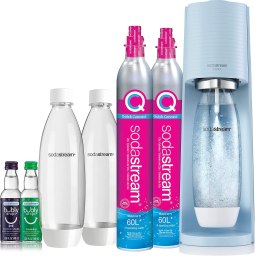 Best of the Best
SodaStream
Terra Sparkling Water Maker Bundle
Bottom Line
Compatible with other SodaStream bottles and flavors, this package includes all you need to begin making your own sparkling beverages.
Shop Now 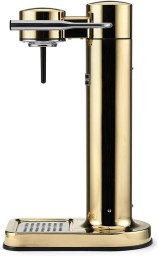 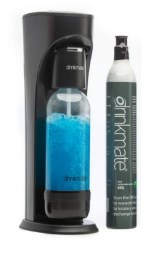 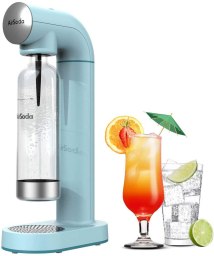 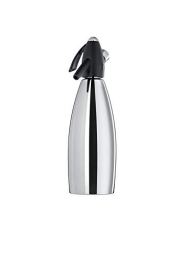 Top Pick
iSi North America
Siphon Soda Maker
Bottom Line
If you need a soda maker to provide refreshing and bubbly soda water for your fruit drinks and cocktails, this is the model for you.
Shop Now 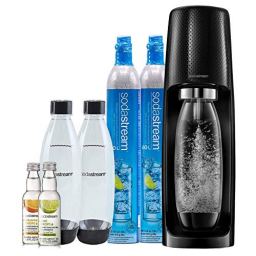