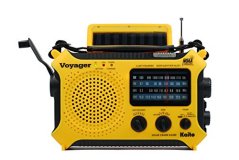 Has plenty of extra features to make it a valuable accessory when camping.

Available in several color choices. Allows you to charge the unit with solar panels or a hand crank for the 2,000 mAh power bank. Can access FM, AM, and NOAA weather radio signals. You can charge mobile devices. 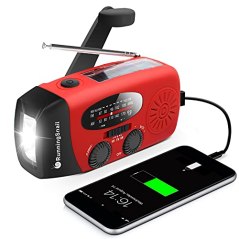 Inexpensive emergency radio, yet it has both solar panels and a hand crank.

Small radio body, so it's easy to carry with you anywhere you go. Draws FM, AM, and NOAA weather radio signals. Has a flashlight for convenience. Just enough power, so you can charge a mobile device. 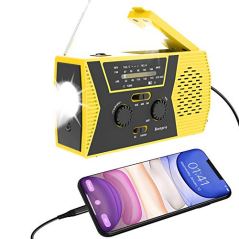 Versatile portable radio that can draw power from the solar panel or the hand crank. Has a 2,000 mAh power bank, so you can charge other devices if needed. Provides access to AM, FM, and NOAA radio channels. Has a flashlight. Good price.

Durability is a bit of a question mark. 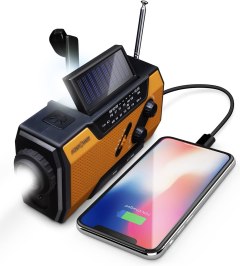 Reasonable price for an emergency radio with a solar charging option.

Includes a 2,000 mAh power bank, which means it can charge other devices as needed. Includes a flashlight. For cloudy days, it has a hand crank to create the power. Can access AM, FM, and NOAA weather stations.

May not survive a fall or rough treatment. 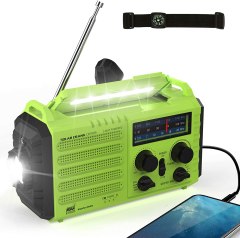 Versatile unit that has all of the features you will want when in a remote area.

With a 2,000 mAh power bank, you'll be able to charge other devices as needed. Easily pull in nearby AM, FM, and NOAA radio signals. Includes a flashlight and a reading light. Ships with a solar panel and a hand crank.

May struggle to pull in far-off radio signals.

One vital item you need during a tornado, hurricane, earthquake, or other emergency is information, which can be a hard thing to find when the power goes out. A good solar radio with a solar panel and hand crank can keep you informed even during a power outage.

Solar radios also typically include other add-ons, such as a flashlight, making one a valuable addition to your household emergency kit or grab-and-go bag, as well as more mundane uses like camping or hiking trips.

When looking at solar radios, you’ll find a wealth of features that can quickly become overwhelming. Our buying guide covers everything you need to know, from battery size and bands to charging methods and survival add-ons, to find the right one for your needs. In addition to covering what you can expect from a solar radio at various price points, we also link to some of our favorites for you to explore. 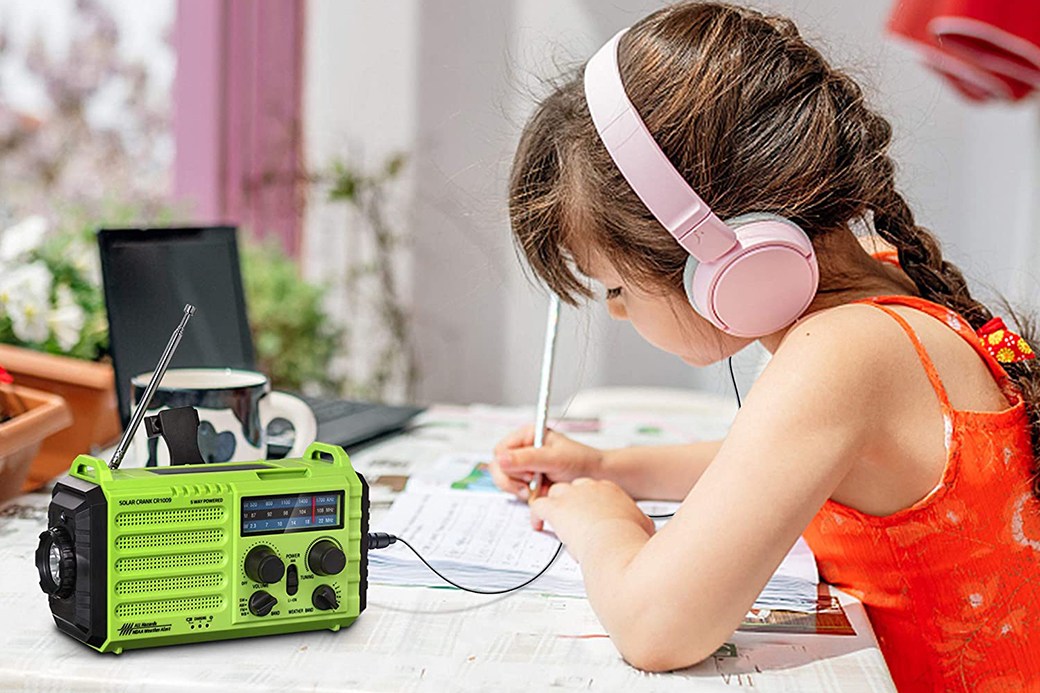 Since these radios are powered either by the sun or you, they are much more eco-friendly than traditional radios.

If it’s a radio, it has to have radio bands. All solar radios have the ability to receive at least three standard bands: AM, FM, and the severe weather/emergency federal network of the National Oceanic and Atmospheric Administration (NOAA).

Some solar radios, particularly those at higher price points, have additional bands, such as shortwave (SW). While rare, some are also equipped with Specific Area Message Encoding (SAME) alerts so you don’t need to search for weather alerts; they are automatically transmitted to you.

Whatever bands your solar radio includes, you want the signals to be clear and free of static.

The one primary feature that sets a solar radio apart from other radios is the way that it’s charged. Most solar radios can be charged via a number of different methods. When considering a solar radio, the rule of thumb is the more powering options the better.

Solar: All of these radios have an attached solar panel. Some of these are hinged, so you can more easily point the panel toward the sun for more efficient charging. It can take several hours, even as much as 25, to fully charge the radio this way.

Hand crank: This is also a common feature on solar radios. While solar charging can take quite a bit of time even on the brightest days, a hand crank can provide battery power quickly via kinetic energy. While it varies from radio to radio, cranking for 15 minutes provides about 5 minutes of battery power.

USB: Many solar radios allow charging via USB, although this may not be an option in an emergency situation.

Batteries: Some solar radios also run on AA or AAA batteries. This can be an easier way to power the radio when using it in non-emergency circumstances.

The run time, or the length of time the solar radio can run on a full charge, varies considerably from one radio to the next. While manufacturers claim that their solar radios run anywhere from 10 to 30 or more hours on a charge, the real run time usually falls a bit short of their claims. Somewhere between 6 and 12 hours seems to be common for radios of this type, although the run time will be less if you also run other powered features, such as the flashlight, at the same time you’re using the radio.

Solar radios are designed for use in an emergency, so they tend to be a bit tougher than your standard radio. Most solar radios are designed with some level of shock and water resistance, and some can withstand being dropped or rained on, something to consider if you want to take your radio on hiking or camping trips. If a radio is going to be useful in an emergency situation, it must be able to take a bit of abuse and still work reliably.

However, if you only plan to use the solar radio under normal circumstances or during events such as power outages, durability may be less important.

While these radios aren’t what you would consider huge, they do vary in size, which might factor into your decision. More compact solar radios, such as those that weigh less than half a pound and measure less than 5 inches long, are a good choice if you’re in search of a lightweight radio you can toss in a pocket or tuck in a backpack. If you’re buying a radio to use as a backup in case of a power outage at home, size and weight may be less of a consideration. 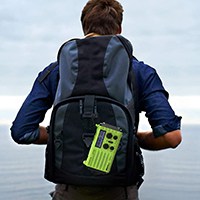 Did You Know?
You need a solar radio with Specific Area Message Encoding capabilities to automatically receive messages from the SAME system. Check the radio specs carefully before ordering.
Staff
BestReviews

Some manufacturers offer solar radios in a choice of colors. The color you choose is largely a matter of personal preference, but note that a bright color like yellow is easier to find in low-light situations and easier to see in an emergency situation.

The battery in these radios can range from less than 1,000 to 5,000 milliampere-hours, with 2,000 being the average. The higher the number, the more juice the battery has, which means a longer run time and better ability to recharge other devices. Note that a larger battery also takes longer to fully charge.

While uncommon, some solar radios include a charge indicator, so you know roughly how much of a charge your radio has left.

These solar radios also function as a power bank to charge smartphones and other devices. Even inexpensive radios that cost as little as $10 have this capability. If this is a feature you plan to use regularly, consider buying a solar radio with a battery in the 4,000 to 5,000 milliampere-hour range for best results.

One feature that is pretty much universal in solar radios is a built-in LED flashlight, which can be useful during power outages or when camping or hiking. To really take advantage of this feature, choose a solar radio that includes two lights: a flashlight and a desktop/reading light.

Solar radios are very similar to each other in what they do, with most offering a standard set of features. Manufacturers differentiate their products in the various survival or emergency add-ons they include. Here are some common add-ons; most solar radios include a few items on this list.

A siren in a solar radio is handy for drawing attention as well as scaring off wild animals.

Inexpensive: In the $10 to $20 range, solar radios are smaller in size, with batteries that are 1,000 milliampere-hours or less. While many of these incorporate a flashlight, they include little in the way of added features. Solar radios in this range tend to be less durable and water-resistant.

Mid-range: You can find more durable models in the $20 to $30 range, and these solar radios offer at least moderate shock and water resistance. Solar radios in this range have the standard bands (AM, FM, NOAA), and some include shortwave bands. Batteries are larger, usually around 2,000 milliampere-hours, and extras like SOS alarms and red beacon lights are common.

Expensive: Anyone interested in preparing a comprehensive emergency kit should target the $30 to $50 range. These solar radios have the largest batteries, often 5,000 milliampere-hours,  that offer maximum effectiveness at charging phones and other devices. Four charging options are common here, with most offering both USB charging and battery compatibility. If you want maximum shock and water resistance and lots of add-ons, these are the solar radios for you. 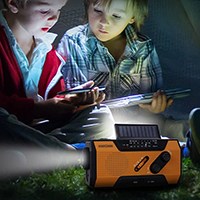 Did You Know?
The smaller the solar panel, the longer the radio takes to completely charge.
Staff
BestReviews 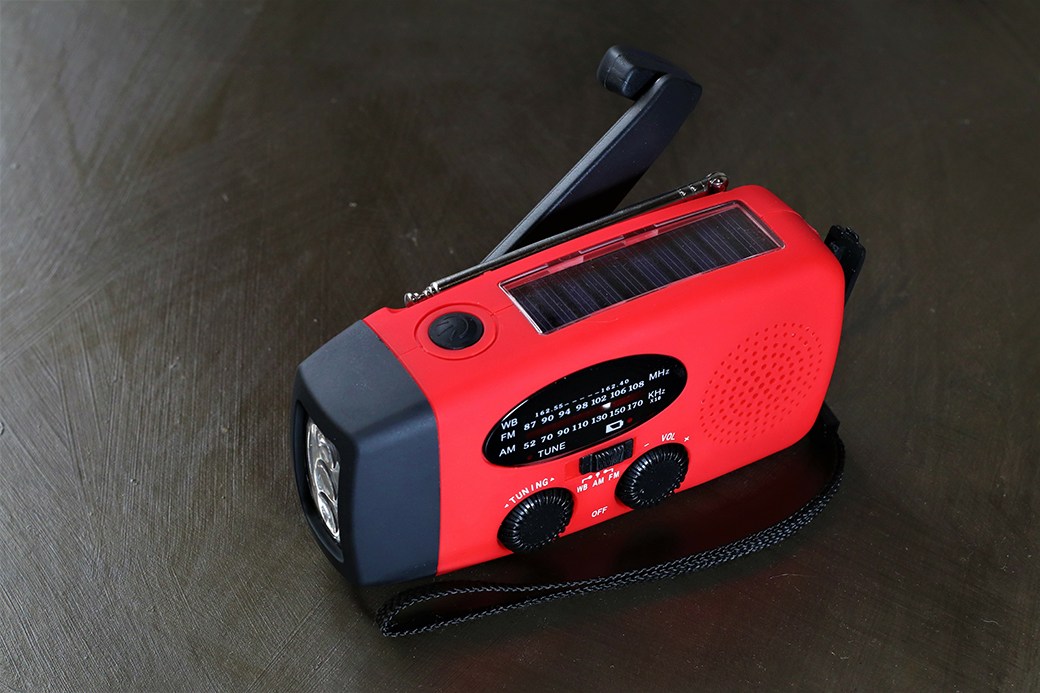 Solar radios are considered emergency radios, so yours should have the ability to receive weather information from channels like NOAA.

Q. What is NOAA and why is it on my solar radio?

A. The National Oceanic and Atmospheric Administration maintains a network of over 1,000 stations across the United States and its territories that broadcast on the VHF band. NOAA operates 24 hours a day and transmits warnings, forecasts, watches, and other relevant weather or emergency information. If you need to keep updated on everything from tornadoes and hurricanes to power outages and oil spills, tune in to the NOAA presets.

Q. What is the SAME system?

A. When you tune into a channel to receive information from NOAA, the Specific Area Message Encoding system transmits to you. Available on some solar radios, this system automatically alerts you to weather and other emergencies in your area. Once you’ve programmed in your specific county or other location code, the SAME system transmits whenever there is a specific alert in your area. Usually, this comes as a signal followed by a warning message, a description of the affected counties, and a notice of when the warning will expire.

A. Because the solar panel on these radios is pretty small, they can take a while to fully charge, about 10 to 12 hours. Some solar radios we’ve seen can take up to 25 hours to fully charge. Therefore, it’s a good idea to choose a radio that also has USB or battery charging, particularly if you want to use the radio in nonemergency situations. 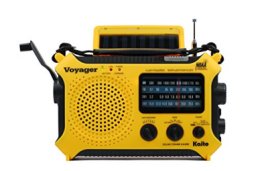 Best of the Best
Kaito
Emergency Radio with Solar
Bottom Line
Has plenty of extra features to make it a valuable accessory when camping.
Shop Now 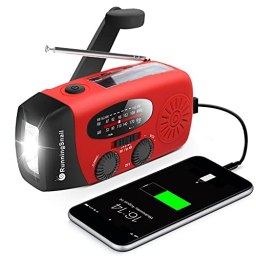 Best Bang for the Buck
RunningSnail
Emergency Radio with Solar
Bottom Line
Inexpensive emergency radio, yet it has both solar panels and a hand crank.
Shop Now 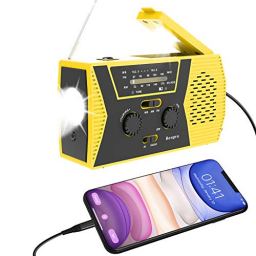 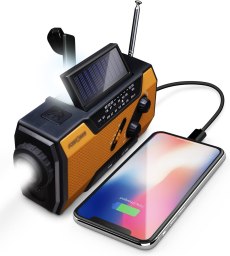 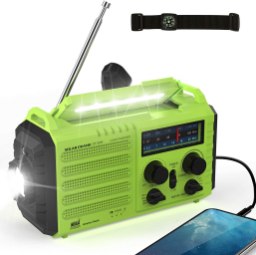 Top Pick
ROCAM
Emergency Radio with Solar
Bottom Line
Versatile unit that has all of the features you will want when in a remote area.
Shop Now