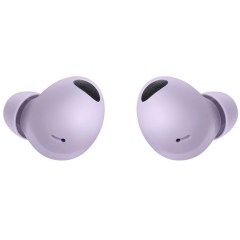 Samsung’s feature-packed second-generation pro wireless earbuds are worth the upgrade. 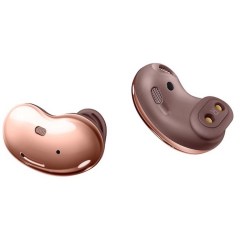 These bean-shaped earbuds impressed us with sound quality and performance in our user testing.

Excellent audio in our tests. On-ear design can be more comfortable for those who dislike in-ear buds. Offers active noise cancellation. After break-in period, felt comfortable to wear even with small ears, per our user testing. Works with Apple devices.

Battery life, while satisfactory in our testing, is shorter than other Buds models. 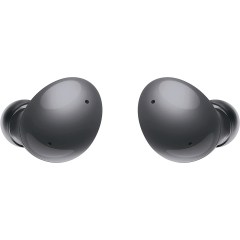 Ultra-light and truly wireless earbuds with excellent sound and comfort.

Limited water resistance. Design may not fit some ears or tastes. 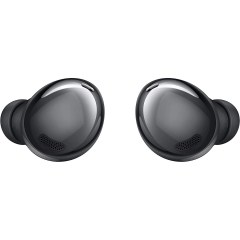 Samsung's Galaxy Buds Pro deliver rich and clear audio that makes them well worth the investment.

Some found that the earbuds struggled to stay in place, especially while chewing or talking. 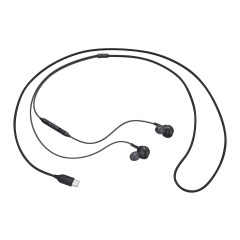 If you’re looking for wired earbuds that hook up to a USB-C port, these earbuds are worth considering.

No longer included with most Samsung phones.

Are you looking for the best earbuds to go with your Samsung phone? Samsung has come out with various models of their Galaxy Buds since they debuted in 2019. But what are the differences between them, and which would be best for you?

If you’re shopping for Samsung earbuds, you’ll notice three product lines: Buds2 Pro (best specs and highest price), Buds2 (a more affordable option) and the bean-shaped Buds Live. Samsung also offers wired earbuds, named the Type-C Headphones, with audio by AKG that can plug into devices with a USB-C port. Older models, like the first Buds Pro and Buds Plus or the 3.5-millimeter earbuds that used to come with Samsung smartphones, can still be found, but they’ve been discontinued.

We think the Galaxy Buds2 Pro are the best overall Samsung earbuds for their great 360-degree sound quality and adaptive ANC. The Buds Live are worth considering if you want the best bang for your buck. If you have older Samsung earbuds, it might be worth it to upgrade to one of these newer models.

Introduced in 2022, the Galaxy Buds2 Pro are Samsung’s flagship earbuds with the rounded, stemless shape that defines the Buds lineup. As truly wireless earbuds, there’s no cord to connect them to an audio source or each other. Instead, they use Bluetooth to pair with smartphones or other devices.

The Buds2 Pro are in-ear buds with three silicone tip sizes that go into your ear canal, creating a seal that blocks outside noise like conversations and traffic. The Buds2 Pro boast features like adaptive ANC, which adjusts automatically depending on circumstances; 360-degree audio that makes sound seem like it’s coming from all around instead of just left and right; seamless pairing; and discreet woofers and tweeters for fuller sound quality. Many of the Buds2 Pro’s most advanced capabilities require Samsung devices running Samsung’s OneUI software. Highly water-resistant, the Buds2 Pro are made for sweaty workouts and capable of withstanding immersion for up to 30 minutes in fresh water. (That said, Samsung does not recommend putting them to the test in the shower or pool. See FAQ below.)

Unlike the rest of the Galaxy Buds lineup, the bean-shaped Galaxy Buds Live are on-ear buds that rest just outside the ear canal. People who have trouble with in-ear buds may find the Buds Live more to their liking. We found when we tested a pair of Buds Live that they ultimately felt more secure than competing earbuds after a short adjustment period. They come with two sets of silicone wings to adjust the fit.

Sound quality is clear and crisp — great for music and video content — with a large driver and bass venting that make up for the on-ear design. They also offer ANC, which some rival on-ear wireless earbuds don’t. Battery life is adequate at 7.5 hours, but other Galaxy Buds models last longer. The Buds Live, introduced in 2020, are one of the few Galaxy Buds models that work well with Apple’s iPhones and MacBooks.

Samsung’s Galaxy Buds2 are the third generation of the original Galaxy Buds, replacing the Buds Plus in August 2021. They share the same rounded in-ear design as the Buds2 Pro but are slightly lighter, and they have a woofer rather than a woofer and tweeter like the Pro model.

Like the Buds2 Pro and the Buds Live, the Buds2 offer ANC, although they won’t adapt automatically to situations like the others do. The Buds2 have a longer battery life than the Buds Live, rated to almost 20 hours.

Like the Buds Pro, the Buds2 support seamless audio transfer between Samsung smartwatches and smartphones as well as the ambient sound feature that allows you to hear your surroundings. But the Buds2 are less water-resistant than the Buds2 Pro, and like the Pro, they are limited when paired with non-Samsung phones.

With tuning by Samsung’s subsidiary, the legendary audio brand AKG, the Type-C Headphones are in-ear buds with silicone eartips and a Y-cable ending in a USB-C jack. There are a couple of reasons to choose wired earbuds over wireless. First, wire cables are better at transmitting high-quality audio, although wireless is definitely catching up. Second, wired headphones are more affordable than wireless buds. (Until recently, a pair of wired earbuds were included with most Samsung smartphones.)

Like other USB-C headphones, the Type-C Headphones earbuds include a DAC (digital to analog converter) in their connector. Among other things, this allows them to play higher-quality music files than wireless earbuds. Their cord sports an inline remote with audio controls and a fabric jacket that makes them less prone to tangling than wired earbuds with rubbery plastic jackets. Note: Type-C Headphones don’t support ANC.

The Galaxy Buds Pro were the older pro model replaced by the Buds2 Pro. They remain a capable pair of truly wireless headphones with ANC, four levels of ambient awareness for keeping in touch with your surroundings and conversation detection capability. Like the Buds2 Pro, they’re water-resistant and capable of surviving immersion in water up to 30 minutes, which makes them more durable than the Buds2.

In terms of sound quality, they lack the woofer built into the Buds2 Pro. That said, at the time of their release in 2021, they impressed users with their improved sound quality as compared to earlier Buds models. They can last as long as 28 hours between charges, but using ANC reduces that time to just about five hours.

Also, like the Buds2 Pro, the Buds Pro have touch controls built into the earbuds themselves. Some people find them very sensitive, but they can be turned off if you want.

The Galaxy Buds+ were the second generation of Samsung Galaxy Buds, introduced in 2020 and replacing the original Galaxy Buds. They were the last generation of Galaxy Buds to lack ANC, instead depending on their in-ear design to passively block sound from infiltrating the ears.

The Galaxy Buds+ introduced improvements in battery life and sound quality to the lineup with a neutral sound profile and good sound separation, elements that have carried on into subsequent Buds models. The Buds+ are the only other Buds model to date, other than the Buds Live, that offer a high degree of compatibility with Apple’s iOS and iPhone, thanks to a native iOS app to access their more advanced features. They are a little blockier than subsequent models, and like the Buds2, they aren’t very water-resistant.

Samsung’s 3.5-mm Headphones, no longer available from the company, are essentially the same earbuds as those on the newer Type-C Headphones except that they plug into the trusty 3.5-mm audio jack rather than a USB-C port. Samsung began removing headphone jacks from its smartphones in 2019, but some models in its low-cost A-series line still have them.

In other respects, these earbuds are the same as the Type-C buds. They have tuning by AKG, an in-ear design, a Y-shaped fabric cord that resists tangling and an inline remote for controlling volume and playback. They’re officially discontinued, but you can find them online from third-party sellers.

Samsung sells a couple of protective covers for their Galaxy Buds charging cases. This includes a tight-fitting cover made of flexible silicone and the Z Flip3 Cover, designed to look like a miniature version of Samsung’s Z Flip3 foldable phone.

Unlike flexible case covers, the Z Flip3 cover is made of hard plastic, providing a significant additional layer of protection. They allow Buds earbuds with wireless charging cases to charge through them, but their own “charging port,” “speakers,” and “readout” are all cosmetic. They also add a bit of bulk to the Buds charging case.

A. Everyone has differently shaped ears, and what fits well for one person may not fit well for someone else. Samsung’s earbuds, with the exception of the Buds Live, are in-ear buds, while Apple’s original AirPods, AirPods2, and AirPods 3 are on-ear buds.

Note that Apple’s AirPods all have stems that stick out some distance from the ears, while Samsung’s Galaxy Buds are much rounder and nestle completely in the outer ear. That may feel better for people who dislike AirPods stems or for whom AirPods tend to fall out.

Q. Can I wear Galaxy Buds2 in the shower?

The Buds Pro and Buds2 Pro have an IPX7 rating: resistant to full immersion for 30 minutes. But Samsung still recommends not using them in the shower, spa, sauna, or swimming pool.

Q. Can you sleep with Galaxy Buds in?

A. Thanks to their design, it’s possible to lie in bed with Galaxy Buds models, even on your side. In general, they nestle in the outer ear without sticking out too much. The Cleveland Clinic offers tips about whether you should wear earbuds to bed and how to do so safely.

After researching all of the earbuds Samsung has to offer as well as some of their discontinued models, we tested the Galaxy Buds Live to see how they did in these areas. 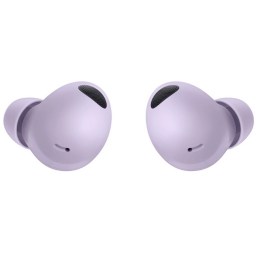 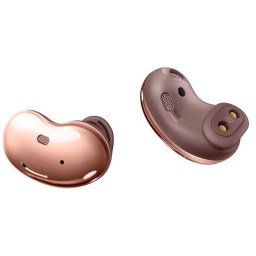 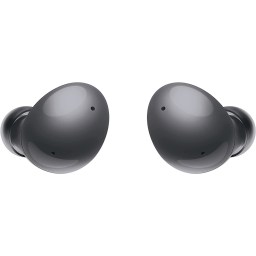 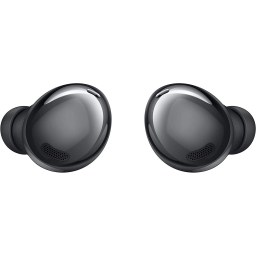 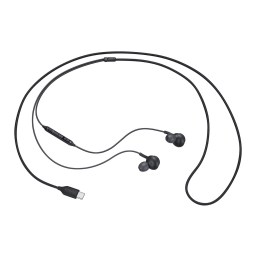 Top Pick
Samsung
Type-C Headphones
Bottom Line
If you’re looking for wired earbuds that hook up to a USB-C port, these earbuds are worth considering.
Shop Now 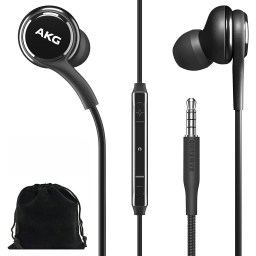 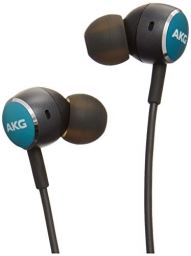 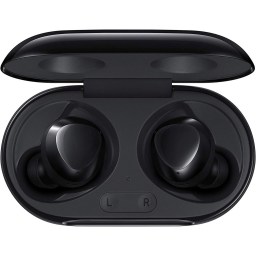 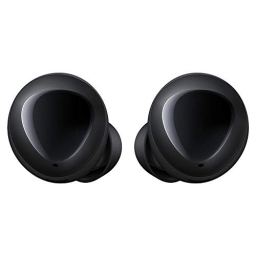 Top Pick
Samsung
Galaxy Buds
Bottom Line
Despite some quirks, these earbuds have user-friendly features and nice sound quality. A good choice for those who use Android.
Shop Now 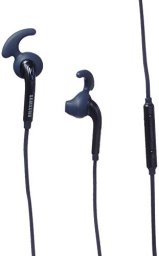