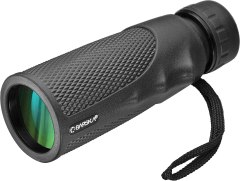 Durable construction and high-quality optics make this great for a variety of activities and uses.

With features like multi-coated optics and BK-7 prism, this monocular provides clear and vivid images. Dry nitrogen sealed and rubber coated, this monocular can hold up to drops, water, and fog. Textured grip on handle makes this easy and comfortable to hold without slippage.

Larger than expected and may not fit comfortably in all pockets. 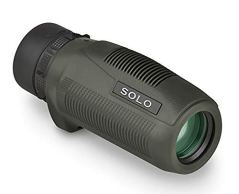 A great fit for camping, this streamlined, minimalist monocular is fantastic in harsh weather.

This monocular is built around a 25mm lens and features 8x magnification. Body is fully rubberized, and the interior is filled with nitrogen and sealed with o-rings to prevent fogging. Weighs less than 6 ounces. 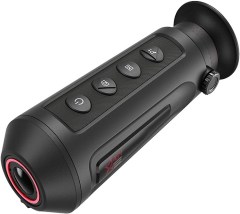 Ideal for hunters, hikers, or anyone who needs to see at night. This monocular picks up on thermal images in the area with ease.

Rechargeable battery lasts up to 7 hours without Wi-Fi hotspot activated. Features a 160x120 infrared detection system that’s great for use outdoors and at night. Monocular has the ability to track distance and highest thermal target.

May not display accurate images on hot, sunny days or when weather is foggy. 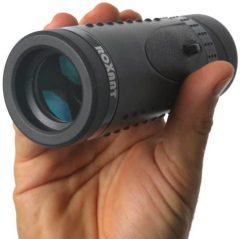 Compact, durable, and easy to grip, this is a great monocular for travel, birding, spectator sports, concerts, or enjoying scenery. 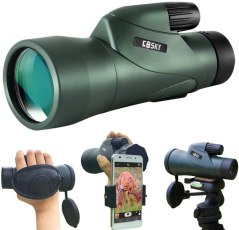 An outstanding monocular in a very competitive marketplace. We doubt you would be disappointed.

Some users feel it's a bit bulky. Smartphone camera mount is of poor quality.

Binoculars are very popular, but good monoculars have a number of advantages, not the least of which is giving you the same optical power for less money.

Hundreds of monoculars are available from dozens of manufacturers, from models as small as your thumb to others a foot or more long. Monoculars come with a range of different functions and features, and technical terms that are specific to optical devices can sometimes cause confusion. 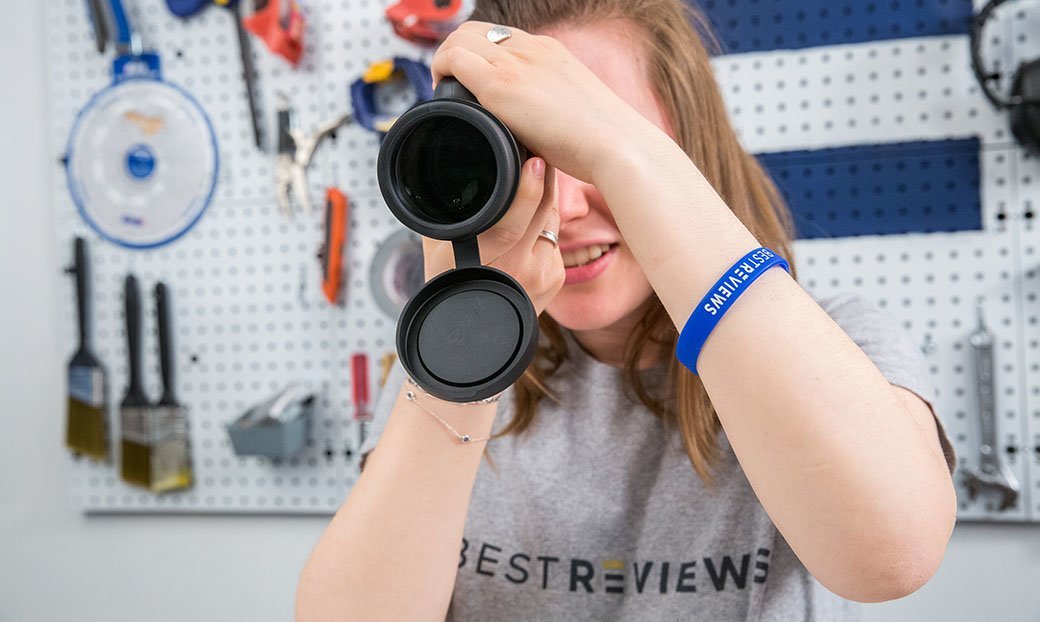 Not all manufacturers state magnification accurately. Check customer feedback and get your monocular from a recognized, reputable brand.

Why buy a monocular?

The most popular type of monocular is like half a pair of binoculars. It fits in a pocket, making it easy to carry around, and is simple to use. If you want to see something that’s far away but don’t want to carry binoculars around, a monocular is a great device.

There are certain features to consider when buying a monocular.

Readers should note that spotting scopes and hunting scopes are also monoculars. However, they fall into another usage category, so they’re not covered. 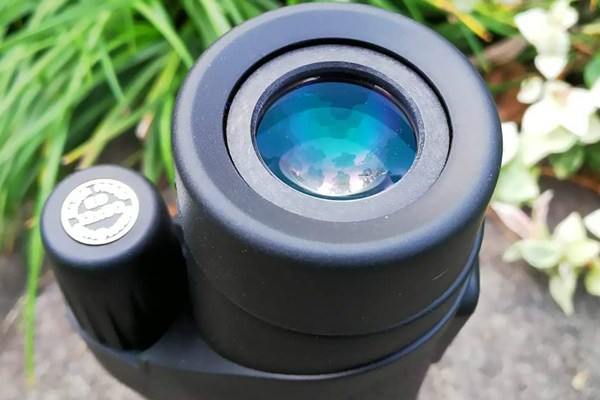 Although monocular lenses come in many forms — coated, uncoated, multi-coated, fully multi-coated — we tend to favor those that are multi-coated. A monocular’s lens coating improves image clarity and reduces glare. 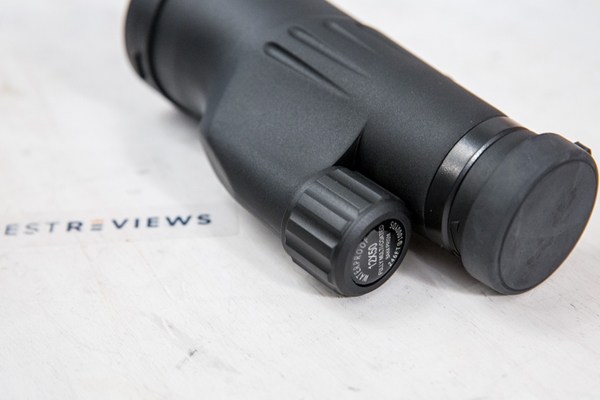 When researching night vision monoculars, we look for those that allow you to see up to several hundred yards away. 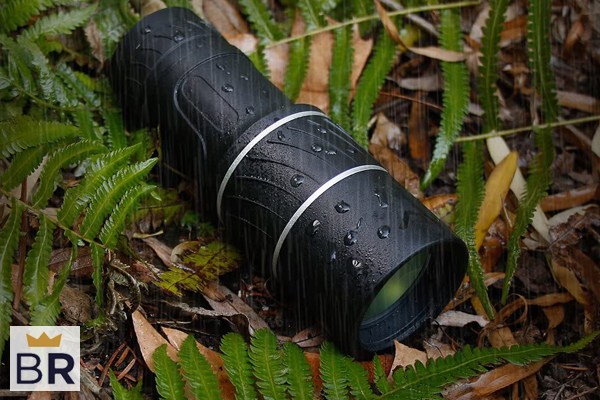 We appreciate monoculars that come with a seal around the lenses. This helps prevent water and dirt from sneaking inside. 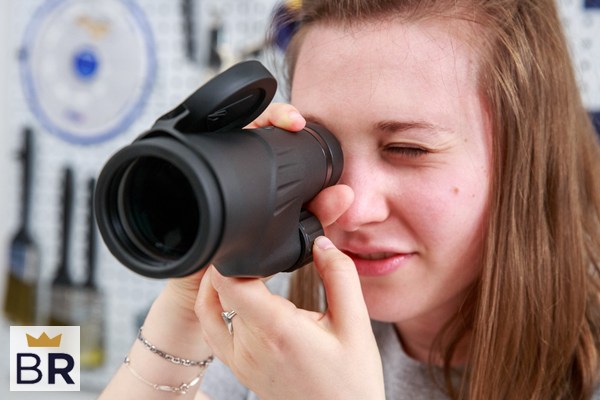 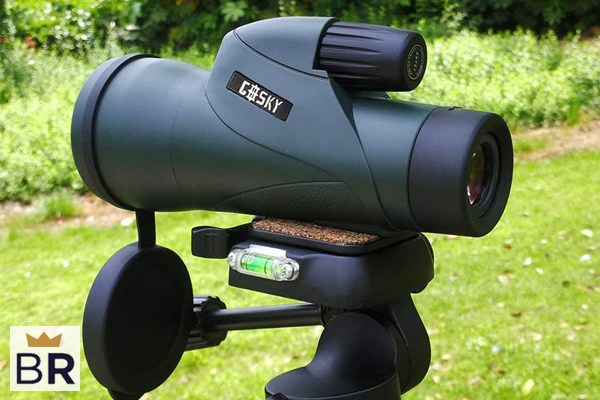 Eye relief is the distance from your eye to the eyepiece, in millimeters, at which you can still see the whole field of view. We appreciate monoculars with an eye relief of 14 millimeters or greater. 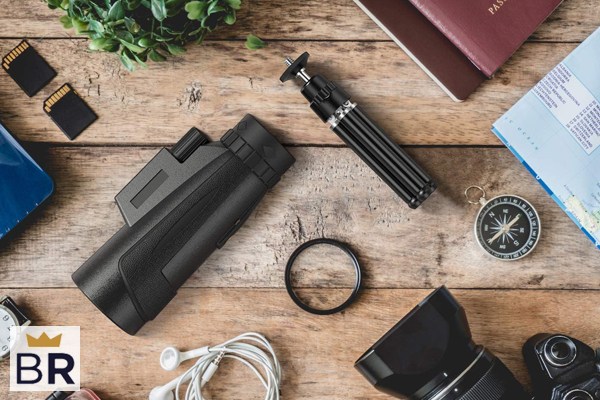 We look at monoculars with two types of prisms: BAK7 and BAK4. Higher-end models tend to use BaK-4. 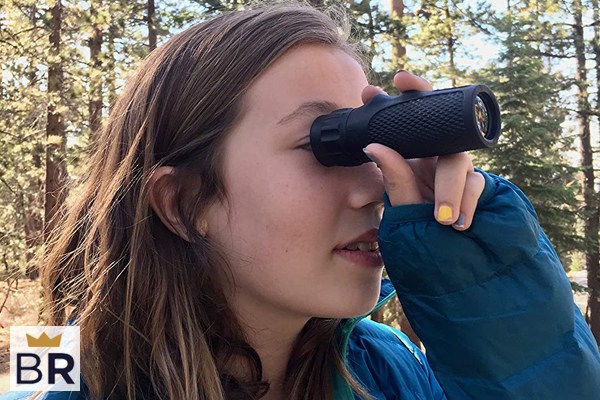 We find out each monocular’s field of view to determine the activities for which it’s best suited. Notably, increasing the magnification reduces the field of view. 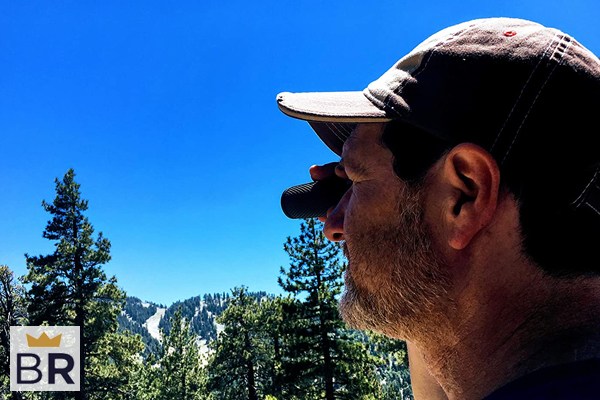 We take note of each monocular’s objective lens rating. The larger the number, the more light gets in, and the clearer your view will be. 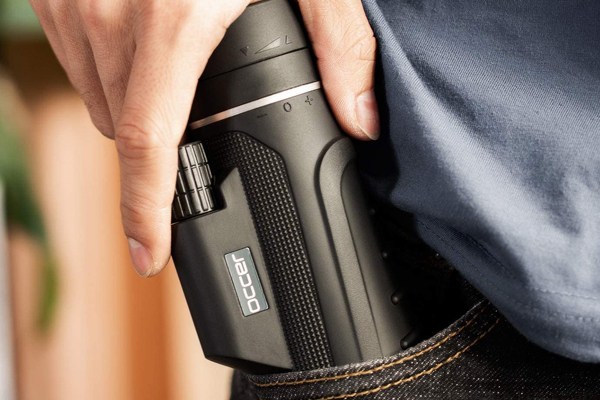 We look for monoculars with a minimum focus length of 6 to 7 feet. 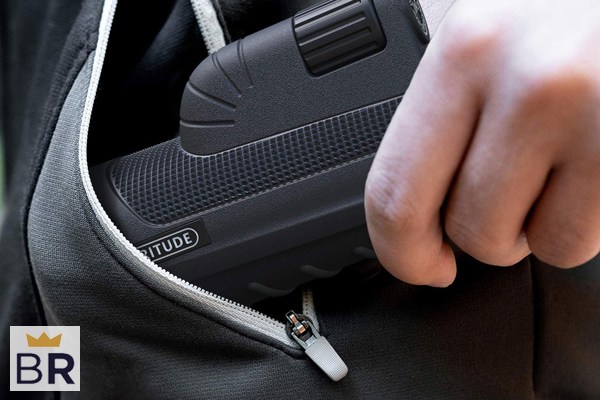 We think about how a monocular is focused. Older monocular models must be held with two hands. However, most modern models offer one-handed focusing.

Modern night vision monoculars offer remarkable detail in a relatively small package, but there are some drawbacks.

Night vision monoculars make up something of a specialist market. As such, the rest of this shopping guide concentrates on popular daytime monoculars.

Did you know?
“Fog proof” doesn't mean your monocular's lenses will never mist up. If you take it from a warm environment to a cold one, some condensation is inevitable. The interior of a fog-proof monocular should not mist up.
STAFF
BestReviews

There are several monocular specifications that are important when choosing one to buy. The first impulse of many people is to go big on magnification, but going for the greatest magnification is often not the best choice. You need to consider objective lens size and field of view, too.

When you're choosing a monocular, you'll see two numbers in the specs – for example, 5x15 or 10x50. The first number is the magnification. In these two examples, that means what you see is five times normal size or ten times normal size.

Bear in mind that as magnification increases, the monocular gets bigger and heavier. It also becomes harder to hold the image steady. Our advice is to think about what you'll be viewing most often and choose your magnification accordingly.

"Increasing the magnification lets you see more detail or farther away, but it reduces your FOV. This can make it very hard to track wildlife."
STAFF
BestReviews

Increasing the magnification reduces field of view (FOV), the area you see when looking through the device. If you want to examine the individual feathers on a bird 1,000 yards away, a wide FOV isn't important. If you want to scan an area for wildlife, FOV is important.

There’s no perfect answer as to FOV – it's a question of making the best compromise. Most manufacturers give FOV figures, usually stated as feet per 1,000 yards (240 feet/1,000 yards, for example).

The second number in the two examples above (5x15 and 10x50) is the objective lens size in millimeters. The larger this number, the more light gets into the monocular, and the clearer the view.

The coating of a monocular lens is a complex scientific process. Different manufacturers claim different benefits, making it more confusing. In essence, coatings are light filters. They improve image clarity and brightness by cutting out reflections and increasing the contrast. While multiple coatings don't necessarily mean better images – you need excellent optics in the first place – they are usually a mark of quality because the process requires great care.

There are several different descriptions for lens coatings.

Did you know?
Lens coatings help reduce glare and can clarify the view by increasing contrast. However, they’re only truly effective if you have quality optics to begin with.
STAFF
BestReviews

Other monocular factors to consider

The following features are worth investigating before you make your final purchasing decision.

Also called the exit pupil, this is the distance your eye can be from the eyepiece (in millimeters) while still seeing the whole FOV. Most people hold the monocular against their eye or very close to it, so it doesn't have a major impact. If you wear glasses, you can't do that. Ideally, you should look for an eye relief length (exit pupil distance) of 14mm or greater.

All monoculars contain a prism. There are two types in common use: BAK7 and BAK4. There's nothing wrong with the former, but most experts consider BAK4 to be superior.

This is the minimum focal length, and it is often overlooked. It's worth bearing in mind that as magnification power increases, the ability to focus at short range decreases. Quality instruments of the kind discussed here focus at six or seven feet.

A good seal around the lenses reduces the chance that water or dirt will get inside the monocular.

"Some night vision monoculars can be used during the day, but most cannot."
STAFF
BestReviews

These are precision instruments, but they need to be tough for use in the field. Keeping out water and dust is a big benefit and prevents damage to the interior of the device. Some kind of armor to make the monocular shock-proof helps protect it from everyday knocks.

Some monoculars are filled with nitrogen to keep out hydrogen and oxygen, which can form condensation inside the device and cause rust. As long as the structural integrity of the device is intact, the nitrogen prevents internal fogging. Some cheap monoculars are not fog-proof. Internal fogging can be frustrating and might eventually cause damage. It's a question of balancing price against performance.

Older monoculars required you to hold them with one hand and focus with the other. Newer designs have convenient, one-handed focusing.

Caution
Don't walk or run while you're looking through the monocular. You could misjudge distances and trip or fall.
STAFF
BestReviews

Depending on quality and features, you can expect to pay anywhere from $10 to more than $150 for a monocular.

You can buy a cheap monocular for $10 or $15, and why not? It’s a handy magnifier to keep in your bag or pocket. Neither the quality nor the optics may be great, but how many times have you been out and about and wished you could see something off in the distance? Here’s your answer.

For quality optics and features covered in this review, you need to pay a bit more, but these devices are still remarkably affordable. We would happily recommend monoculars that cost $30 and up. You can pay more for so-called "tactical" or specialist models, but those would be expensive overkill for most of us.

Night vision monoculars are different technology. Good entry-level models cost around $150, and it isn’t difficult to spend twice that. 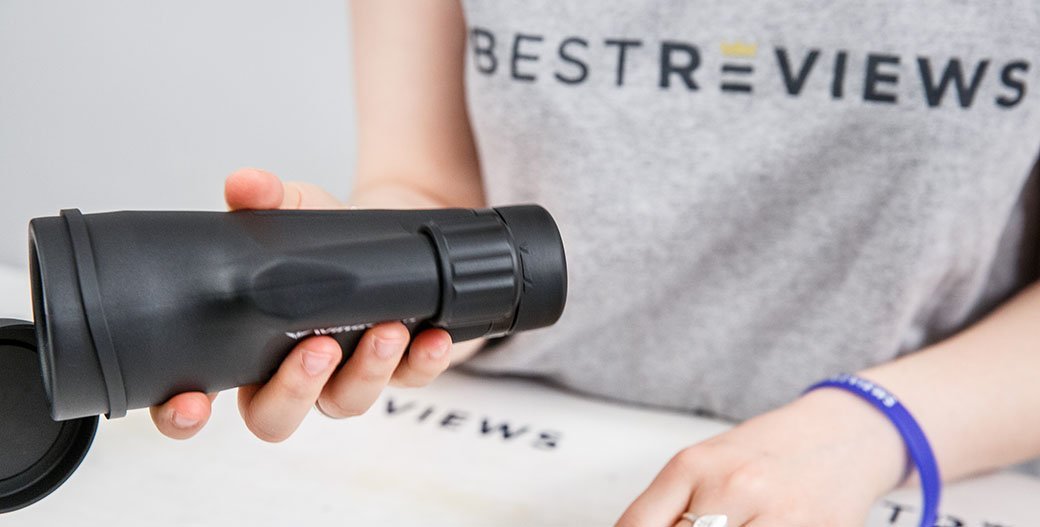 Using a monocular takes practice. It can be difficult to judge distances at first, but you will soon get used to it.

Q. What's the difference between a monocular and a telescope?

A. In some ways, they're different words for the same thing. Monocular literally means you use one eye, which pretty accurately describes the traditional telescope. What we call monoculars today are much smaller and lighter than the average telescope. Many monoculars fit in a pocket. Most telescopes need to sit on a tripod to be effective.

Q. Which is better, a monocular or binoculars?

A. It's a big question, and one not easily answered.

Binoculars are more popular, and there's a much greater range from which to choose. They're generally considered to be more comfortable if you're using them for long periods. You're using both eyes, so your depth perception is better. You also have a wider FOV.

Q. Does it matter which eye I use?

A. You should use your dominant (stronger) eye. You should also close the other. If eye cups are not fitted, hold the monocular slightly away from your eye. If you rest your forefinger on your forehead and keep your arm against your side, you'll get a more stable view. Larger monoculars, particularly night vision models, can be held with two hands. 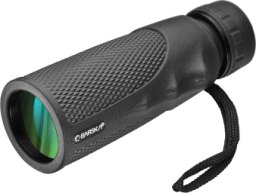 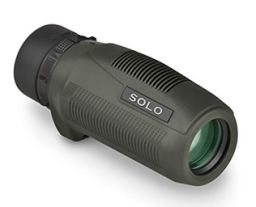 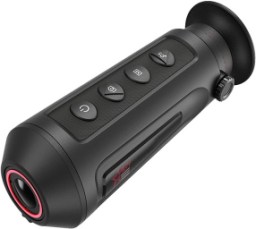 Top Pick
AGM Global Vision
Asp-Micro TM160
Bottom Line
Ideal for hunters, hikers, or anyone who needs to see at night. This monocular picks up on thermal images in the area with ease.
Shop Now 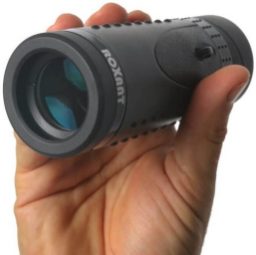 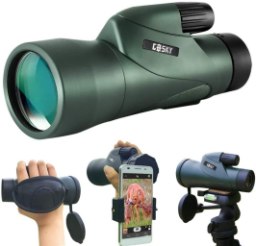 Top Pick
Gosky
Titan
Bottom Line
An outstanding monocular in a very competitive marketplace. We doubt you would be disappointed.
Shop Now 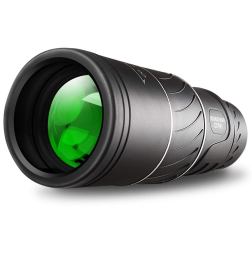 Top Pick
Aurosports
Zoom Monocular
Bottom Line
A popular brand with impressive features, but if you'd rather have better night vision than some of its bells and whistles, check out others on our list.
Shop Now 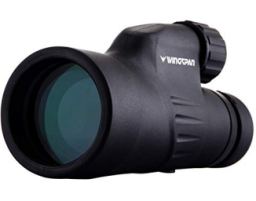 Top Pick
Wingspan Optics
Explorer Monocular
Bottom Line
A superb piece of equipment for the great outdoors. If you have a wish list of monocular features, this has almost all of them.
Shop Now 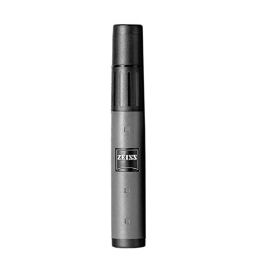 Top Pick
Carson
CloseUp 6x18mm Close-Focus Monocular
Bottom Line
This is great for bringing images into focus that are far away or close up and monocular is small enough to travel easily with.
Shop Now 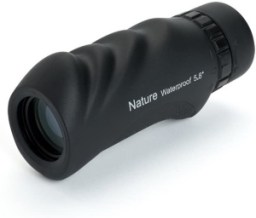