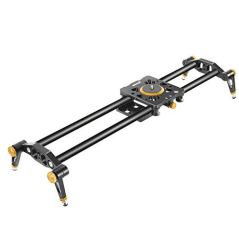 Stabilizer rail system can support camera equipment up to 17.5 pounds with a 31.5-inch length of rail. Slider includes multiple ball bearings to ensure a smooth operation with no wobble that could ruin your video shot. Can tilt the slider at different angles to shoot special effect videos and photos.

Claims to connect easily to a tripod, but you'll probably notice wobbling in this case. 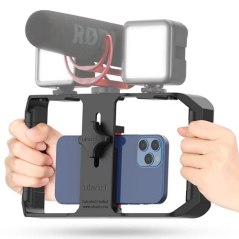 Works perfectly with a smartphone camera, as the frame makes it much easier to hold steady with 2 hands than trying to hold the smartphone by itself. You also can mount other equipment to the stabilizer, such as extra lights or a standalone microphone, to enhance your video shooting.

Clamp may struggle to hold some thin smartphones tightly inside the frame. 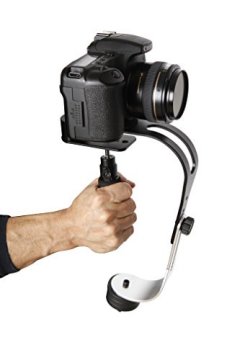 Simple camera stabilizer that provides a high level of quality, while being extremely easy to use.

Will work with many different types of cameras, including smartphones and GoPro models, up to 2.1 pounds. Allows you to use the handle in your hand or the apparatus balanced against your shoulder, so it's as comfortable as possible. Easy to use while you're on the move.

May be difficult to dial in the precise pan and tilt measurements that you want. 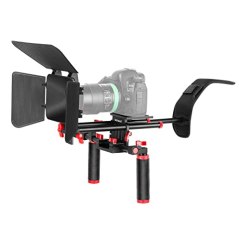 This camera stabilizer rig system looks complex, but it's easy to use, while delivering high levels of performance.

Large enough to work with all styles of cameras. Includes both a shoulder mount and a rail system to give the camera stabilizer plenty of versatility. You may even mount the stabilizer to a tripod. Includes a matte box that can help you minimize stray light from affecting your photos and videos.

Longevity of this device is questionable. Heavier equipment may wobble. 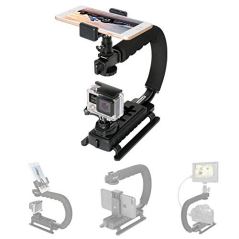 If you are looking for a camera stabilizer that stands out for its comfortable handle and versatility, this reasonably-priced option is worth considering.

Multifunctional design can handle four different types of devices, including action cameras, smartphones, DSLR cameras, and camcorders. Compatible with GoPro cameras. Handle is covered in foam, which makes it easy and comfortable to grip. Price falls on the lower end of the spectrum.

Difficult to steady in some fast-action situations. Has a few plastic components that aren't very durable and are prone to breaking.

When taking photos and videos, having a smooth, steady shooting base will yield better results. In certain shooting and lighting situations, holding the camera by hand doesn’t give you the sturdiness you need. Instead, you may need a camera stabilizer.

For still images, a slight movement in the camera just as the photo is being recorded can result in a blurry image. This is a phenomenon called camera shake. It’s especially prevalent in low light photos. Video recording can contain sudden jerking motions if the photographer doesn’t hold the camera steadily when shooting. These motions are extremely distracting to viewers.

Camera stabilizers fix this problem. They absorb slight, inadvertent movements the photographer makes. These units are available with a variety of features and in a variety of sizes, so you can find the perfect stabilizer for your needs and to match your camera. Check out our top picks or read on to learn more about camera stabilizers. 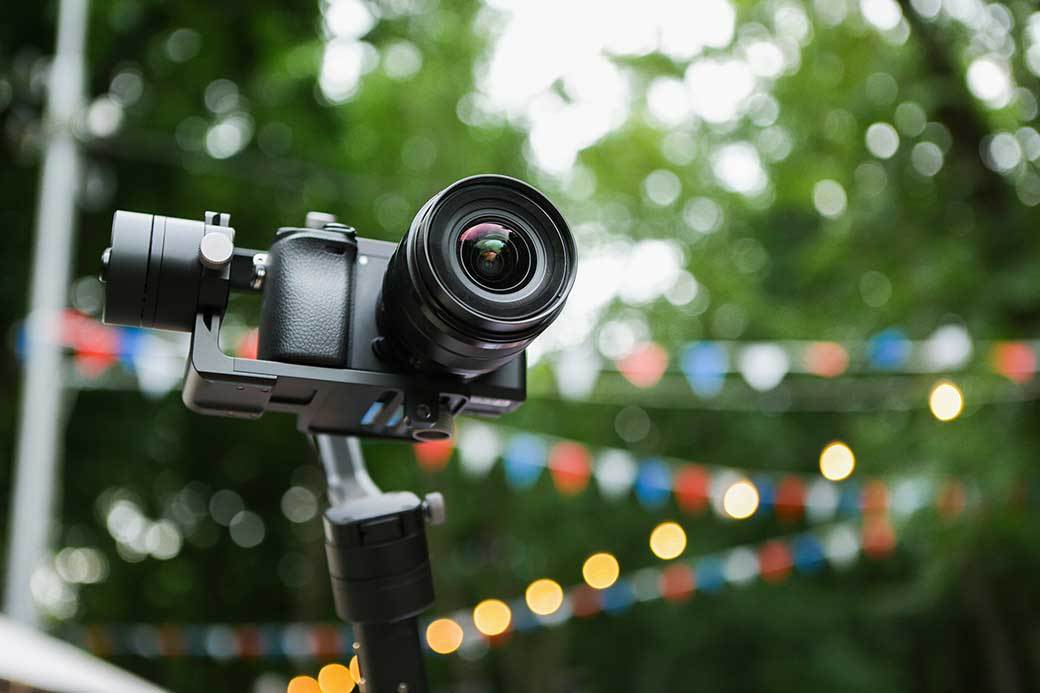 Both heavy and lightweight cameras can benefit from the use of a stabilizer rig system.

The following is a list of functions that a camera stabilizer needs to be able to perform to give you the best results:

When selecting a camera stabilizer, having one that contains a three-axis gimbal provides the best performance. A gimbal allows an object to rotate smoothly around a single axis, ensuring it stays on the desired plane.

With a three-axis gimbal, the camera’s tilt, pan, and roll will be stabilized. No matter what slight movements the photographer makes, the gimbal adjusts and keeps the camera steady.

The gimbal works by tracking the movement of the photographer and compensating as required. It attempts to measure the difference between movement made purposefully and inadvertent movements. If you have a slight tremor in your hand while shooting, the gimbal would compensate for it, for example.

As the camera moves left to right on a horizontal plane, this is called panning. The gimbal keeps the camera’s movements smooth on the horizontal axis when you’re following a runner or animal moving through the scene.

For some shots, you may need change your position as a photographer, while keeping the subject in frame. The gimbal uses the roll stabilization to compensate for the movement you make forward and backward while walking into position. The gimbal keeps the camera from bouncing in relation to the horizon.

As you move the camera up and down on a vertical plane, the gimbal will keep the camera steady. This allows the video to remain smooth when you’re shooting someone walking down a flight of stairs or something falling, for example.

Did you know?
Systems made for especially heavy cameras may use a support vest, support arm, or shoulder brace to help you support the weight without suffering fatigue or pain.
STAFF
BestReviews

Camera stabilizers have quite a large range in price. You can expect to pay at least $10 for a basic camera stabilizer, while high-end models will cost up to $1,000. There are many options in between too.

The most basic camera stabilizers carry a price point of $10 to $40. These stabilizer units won’t consist of much more than a handle with a single-axle gimbal that helps to compensate for slight movement. They’re usually made for smartphones or lightweight cameras.

In the middle range of price points, you can expect to pay $40 to $100. Some of these will be a single post that may be able to convert to a tripod. Many of these units will be made for heavier DSLR cameras. Some will have shoulder or arm braces to help support the weight of the stabilizer. Some three-axis gimbals are in this price range.

If you have high-end photography or video recording needs, a stabilizer in the $100-plus price range is a smart idea. These stabilizers will have three-axis gimbals, creating a steadier shot. They’re also strong enough to handle the weight of big cameras and lenses. You may be able to add extra gear, such as lights or a microphone, to the rig.

"Having a stabilizing system available is especially useful when shooting photos with a telephoto lens. Even minimal movements in the camera are magnified when using a long lens."
STAFF
BestReviews

We’ve collected some tips to help you receive the greatest benefit from your camera stabilizer purchase. 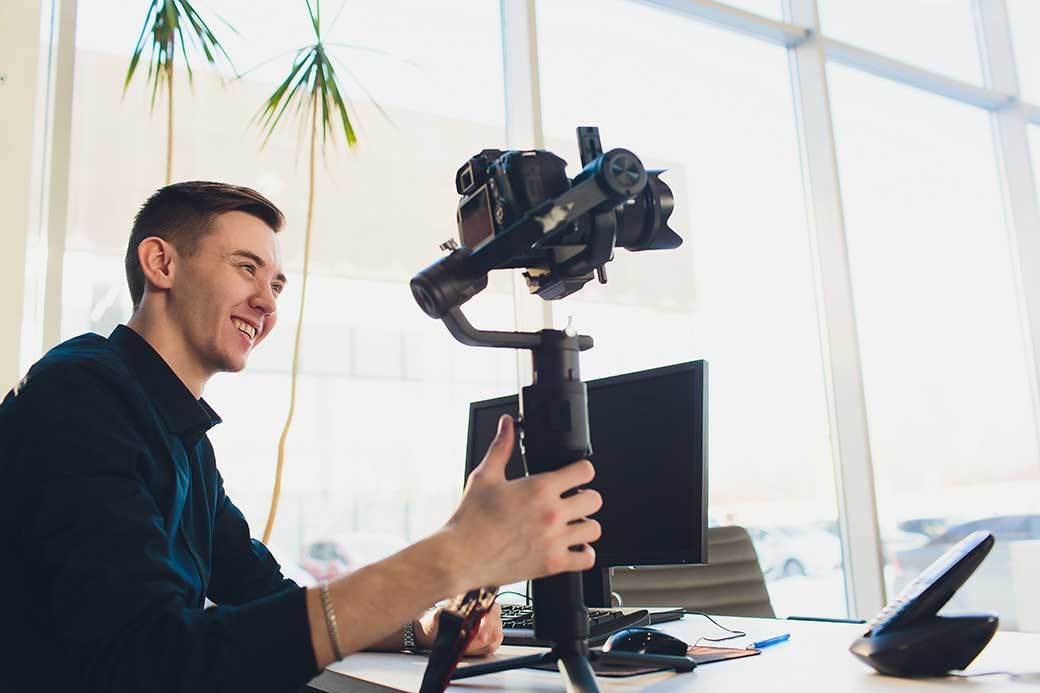 Be certain the camera stabilizer you select can support the weight of your camera and any lens you attach to it. Cameras with small lenses attached weigh less than those with large lenses.

Q. What if I want to add extra lights or other gear to the camera stabilizer?
A.
Some stabilizers are made to hold all your gear. You can add lighting or a microphone to the stabilizer, making it easier to record video. Having extra lighting attached to the stabilizer allows your hands to remain free, while keeping the light you need positioned properly near the camera. 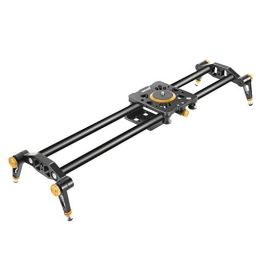 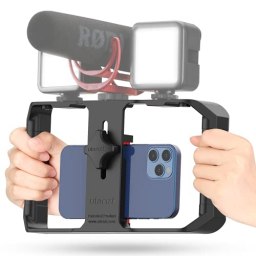 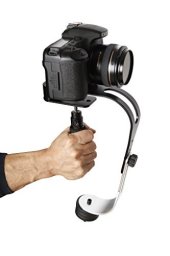 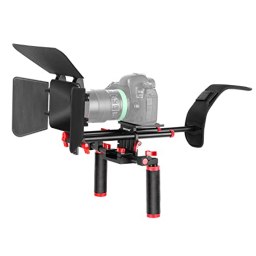 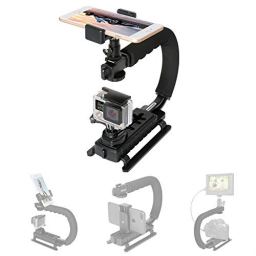 Top Pick
Fantaseal
4-in-1 Camera Stabilizer
Bottom Line
If you are looking for a camera stabilizer that stands out for its comfortable handle and versatility, this reasonably-priced option is worth considering.
Shop Now