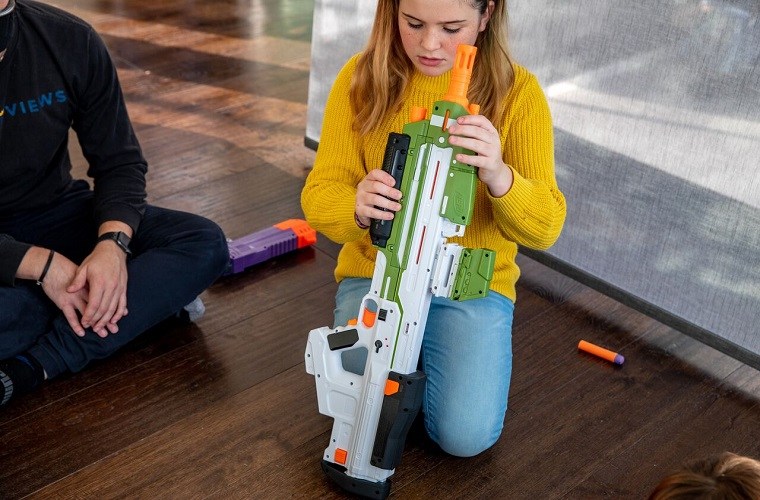 Which Nerf guns are best for beginners?

There are only a few toys as versatile as Nerf’s foam dart blasters. They might look like an average shooting toy, but they represent so much more. Apart from aiming at static targets, these battery-powered plastic weapons have been incorporated into various games and activities.

While colloquially known as Nerf guns, the word “Nerf” is the brand name owned by toy giant Hasbro. It calls the weapons “blasters,” but when people mention Nerf guns, almost everybody knows what that means.

Before you start your Nerf gun journey, there are a few aspects you must be aware of.

You would be wrong if you think Nerf blasters are one kind of standardized weapon. There are several varieties, and your play style can determine which blaster is best for beginners.

Other blasters include Nerf crossbows, sniper rifles and a grenade launcher. Some blasters tie in with popular video games, having similar designs or skins of titles such as Fortnite, Overwatch and Minecraft.

When choosing a Nerf blaster, you must consider a few things, especially as a beginner. It's best to try out a few blasters, but if you don’t have access to a wide selection, some YouTube videos can help.

Cost is one of the most significant factors in choosing a Nerf blaster. Set a budget and look for a blaster within that range. There's no point in spending $100 on a blaster you might not enjoy.

This blaster is perfect for beginners who want to fire off a quick burst of darts. The rotating drum holds six darts, so you don’t have to reload after each shot. It fires up to 90 feet, and you can choose between firing single shots or using the Slam Action for rapid shooting.

Not sure where or what to aim for? This blaster is your best choice. It features a generous 15-dart rotating drum magazine that fires two kinds of darts up to 90 feet. You can customize and upgrade the blaster, as it has three tactical rails, a barrel attachment point and a stock attachment point. It comes with 30 darts.

A handgun is an excellent option for a beginner, and this blaster is a good choice. Inspired by the Fortnite video game, it features a hammer priming action that fires one dart at a time. It comes with eight Elite darts and a removable scope.

If you enjoy being in the thick of the action, this battle rifle is an excellent choice. It features five tactical rails for additional accessories and a removable stock and barrel extension. It comes with 24 darts, and the magazine can hold 10 at a time. The blaster can fire one dart at a time, or it can fire the entire magazine in rapid succession.

If you want to make a statement as a beginner, this sniper rifle-inspired rifle blaster is the perfect tool. It features a bolt-action lever you must pull after each shot to chamber the next special edition gold Nerf Ultra dart. These foam rounds are specially made for Ultra blasters and feature an innovative flight tip and Aerofin technology to reach targets up to 125 feet away. The removable magazine clip holds 10 darts.