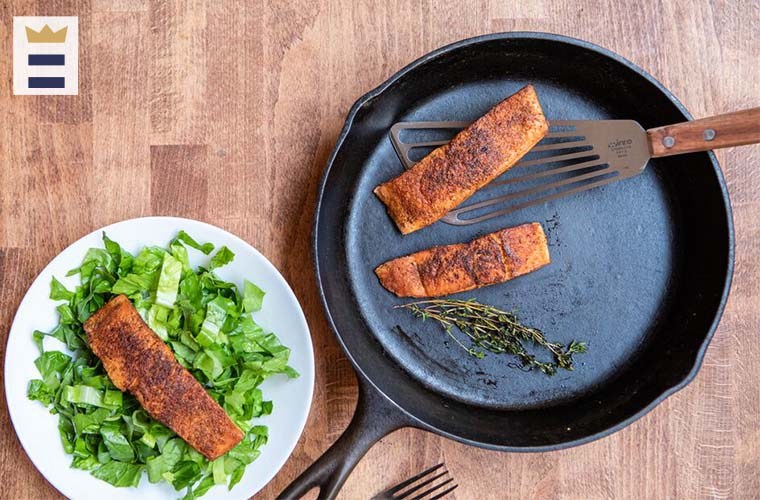 How to season a cast iron pan

Cast iron cookware has a reputation for being high-maintenance, but many of the complex rules people are led to believe are necessary to keep it in good condition aren't based in fact. Caring for cast iron, including seasoning a new pan, is fairly straightforward.

Once you know how to season a cast iron pan, you'll wonder what you were worried about. You can get it done in a few hours — much of that being downtime — and then you're set for decades.

What does it mean to season a cast iron pan?

No need to bust out your favorite spice blend — seasoning a pan is all about adding thin layers of oil to create a durable, nonstick cooking surface. When fat is rubbed onto the surface of a cast iron pan and heated, it bonds to the metal in a process known as polymerization. These polymerized layers are hard and smooth, creating an ideal cooking surface.

You can't use raw cast iron to cook with. The metal is extremely reactive, rusts easily and your food will stick to it, so cast iron cookware must be seasoned before you cook with it.

However, most cast iron skillets sold today come preseasoned, so do you need to season them? Technically, they're ready to use right away, but you'll get significantly better results if you add another few layers of seasoning.

How to season a cast iron pan

Begin by setting your oven to 450 degrees and letting it preheat while you take on the next couple of steps.

Wash and dry your pan

Wash your cast iron pan by hand in hot, soapy water to remove any residue that you don't want to bake onto the cooking surface. Rinse it well and dry it thoroughly so the oil will properly adhere to the surface.

Add a layer of fat

Theoretically, you can use any fat to season cast iron, but some give you better results than others. The best choice is an unsaturated cooking oil with a high smoke point, such as vegetable oil, canola oil or corn oil. Some people recommend flax oil, but it's not something readily available in most kitchens and it's prone to flaking, anyway, so it isn't a great choice.

Once you've picked your oil, take a teaspoon of the oil and rub it into the inside of the pan with a paper towel before moving onto the outside of the pan and the handle. Buff it until it no longer looks greasy.

Heat it in the oven

Place the pan upside-down in the oven on the top or middle rack with a baking sheet or some foil below to catch any oil drips. Leave it to do its thing for 30 minutes. This step gets a little smoky, so don't be concerned but do open a window or turn on your extractor fan.

Remove your pan from the oven before carefully rubbing in another layer of oil and putting it back in the oven. Repeat three or four times.

How to care for a cast iron pan

Cook with plenty of oil

After seasoning your pan, it's ready to use, but you should use plenty of oil for cooking at first. While you don't need to repeat the seasoning process, simply cooking with oil and cooking with oily foods will add extra layers of seasoning over time.

Although the seasoning protects the metal below, cast iron cookware is still prone to rusting so you should never leave it to soak for more than 5-10 minutes, though it's best to avoid it altogether.

There's a vocal anti-soap contingency within cast iron users, but washing it with soap won't strip off the seasoning. It will keep your pan sanitary, so it's highly recommended.

While soap won't damage your pan's seasoning, scrubbing it with scouring pads or steel wool may. Avoid using anything more abrasive than a non-scratch sponge.

Leaving your cast iron cookware damp after washing can lead to rust. Dry it thoroughly with a dishcloth or put it on a hot stove for a minute or two after washing and drying if you want to be safe.

Add an extra layer of oil

Rub in a scant layer of oil after washing and drying, then put the pan on a burner set to high for 2-3 minutes to top up the seasoning. You don't need to do this after every time you use your pan, but doing it occasionally will keep it at its best.

Q. Is there a quick way to season a cast iron skillet?

A. Some people claim they can season cast iron pans more quickly by heating each layer of oil on the cooktop rather than in the oven. The trouble is that cast iron is prone to uneven heating, so this won't give you great results. It's well worth spending the 2-3 hours needed to properly season a cast iron pan, especially considering your pan will be in the oven for most of that time, so you won't need to do anything.

Q. Can you use metal utensils on a cast iron pan?

A. Yes, the seasoning on a cast iron pan is tough enough to withstand metal utensils, assuming you don't gouge into it with sharp corners. In fact, using metal utensils can help prevent lumps in your cast iron pan where small pieces of food carbonize and stick to the surface, eventually getting covered over with new layers of seasoning.

A. A well-seasoned cast iron pan will let you cook anything and everything without worrying about it sticking to the pan, as long as you preheat your pan and use enough oil. However, it's never going to be as effectively nonstick as a cooking surface such as Teflon.

Lauren Corona writes for BestReviews. BestReviews has helped millions of consumers simplify their purchasing decisions, saving them time and money.

How to start a bonfire
by Breanna Richey

Earbuds podcast fans will want to find in their Christmas stockings, according to our tech expert
by Cody Stewart