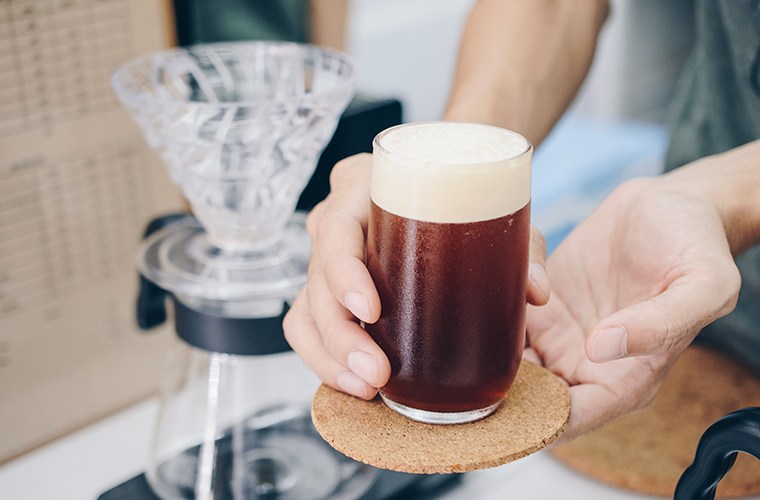 Believe it or not, you can make nitro cold brew at home

Nitro cold brew is a summertime coffee shop treat that many look forward to for its unique mouthfeel, slight sweetness and refreshing chill. Since nitro cold brew typically comes from a hidden keg and a fancy tap behind the counter, it may not strike you as the kind of drink you can make yourself. However, with one multipurpose piece of kitchen equipment, you can make delicious, creamy nitro cold brew at home.

Nitro cold brew begins with a cold brew coffee concentrate that’s made by steeping coffee grounds in cold or room-temperature water for at least 12 hours. Cold brew coffee has a sweeter, less acidic flavor profile than iced coffee, which is then enhanced with the addition of nitrogen. Nitrogen also alters the texture of cold brew, giving it a richer body and smooth mouthfeel.

One of the reasons for nitro cold brew’s popularity is because it’s comparatively healthy. Even if you like to add milk or sweetener to your coffee, you may find that nitro cold brew requires neither, thanks to the way the nitrogen changes the coffee’s consistency and flavor.

How to make nitro cold brew

Plan ahead when you want to make nitro cold brew because it can take up to 24 hours to make cold brew coffee concentrate. Use coarsely ground coffee, and cover the grounds with filtered water in a ratio of 4 cups of water per 1 cup of coffee beans. Stir the mixture and break up any clumps to ensure the grounds are fully wetted.

Let the grounds steep at room temperature for a minimum of 12 hours or up to a full day. Strain the grounds, and store the cold brew concentrate in the fridge for up to two weeks.

Here’s where the special equipment comes in: the secret to making nitro cold brew at home is by using a whipped cream dispenser.

Also known as a cream whipper or whipping siphon, this gadget saves you from having to haul out a heavy stand mixer or whisk up a batch of whipped cream by hand. It’s also a chef favorite shortcut for everything from fancy gels and foams to aerating sauces for a more velvety consistency. The metal canister of a whipped cream dispenser partners with a small stainless steel charger filled with nitrogen, carbon dioxide or nitrous oxide to aerate the canister’s contents.

Once your cold brew is done, dilute the concentrate using a 1-1 ratio of coffee to water, and pour the desired amount into the canister of your whipping siphon. Make sure the lid is fitted with a 2- to 3-millimeter injector tip, then seal the canister, charge it with one shot of nitrogen and shake it for 30 seconds. Discharge the canister and squeeze the trigger to dispense your cold brew into a chilled glass.

In order to pour a glass of nitro cold brew with the telltale frothy head, hold your glass at a 45-degree angle and keep the dispenser’s nozzle flush against the inside of the glass. Pour slowly until the glass is about three-quarters full, then let the glass sit for about a minute to let the foam cascade and settle. If any large bubbles form, gently tap the glass to disperse them. Top up the glass with more cold brew and serve. It’s typically drunk without a straw in order to enjoy the soft, velvety layer on top.

Q. Do you put milk in nitro cold brew?

A. Nitro cold brew is served as is. It already has a creamier texture and more natural sweetness than normal cold brew, so neither milk nor sweetener is necessary.

A. If you’ve never tasted nitro cold brew before, its description might make it sound like a fizzy drink. However, the nitrogen bubbles are so small (100 times smaller than carbon dioxide bubbles) that they don’t create a fizzy drink as carbonation does.

Coarse coffee grounds are ideal for long brewing processes, such as cold brewing; otherwise, the flavor is too bitter. This burr grinder offers 18 grind size options, making it useful for everything from the French press to the espresso machine.

Where to buy: Sold by Amazon and Kohl’s

Improve your coffee’s taste by brewing it with water from a pitcher like this one, which can filter out contaminants, such as copper and chlorine, that affect flavor. The long-lasting filter only needs to be changed every 120 gallons or every six months, depending on usage.

Once your cold brew is done steeping, strain out the grounds with this natural, lint-free and unbleached cotton cheesecloth. It can be washed and reused or composted along with the used coffee grounds.

Where to buy: Sold by Sur La Table

This professional-grade whipping siphon comes with three tips for more versatility. It is dishwasher-safe and can easily be used for a variety of cooking applications beyond nitro cold brew.

For extra-chilled and undiluted nitro cold brew, freeze some of the cold brew coffee in ice cube trays. This model is made from flexible, durable silicone and produces 1.25-inch cubes.

This set of four European crystal glasses is an elegant way to show off your nitro cold brew pour. They’re dishwasher-safe, attractive and versatile.

Where to buy: Sold by Kohl’s and Amazon

Laura Duerr writes for BestReviews. BestReviews has helped millions of consumers simplify their purchasing decisions, saving them time and money.