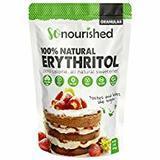 Erythritol is a corn-based sugar alcohol that tastes almost as sweet as the real stuff, but without the glucose spike.

70% as sweet as sugar, minimal aftertaste. Appropriate for diabetics. Does not spike blood glucose levels. Can be used for baking. Vegan and GMO-free. Derived from plant sources. Does not promote tooth decay. Good for sweetening beverages.

This stevia and erythitrol blend is ideal for those who prefer stevia as a substitute but want the low glycemic benefits of a sugar alcohol.

Versatile blend of stevia and erythitrol. Twice as sweet as sugar. Can be used for baking and cooking. Zero carbohydrates. Organic ingredients. 1:1 ratio in granulated form. 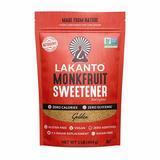 Monkfruit is a natural sugar, not a sugar alcohol, so it works well for both diabetics and non-diabetics on carb-restricted diets.

Monkfruit and erythitrol blend for improved flavor profile. Zero glycemic impact. Suitable for a multitude of diet plans. Both brown and white sugar substitutes available. Minimal aftertaste. Derived from a variety of gourd.

A number of unpleasant side effects are possible. May contain much more erythitrol than actual monkfruit. Erythitrol is an alcohol-based sweetener. 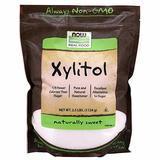 The sugar alcohol xylitol is a great choice for those who follow the keto diet, since it has a very low glycemic impact.

Pure sugar alcohol, not blended with other substitutes. Minimal glycemic impact, ideal for sweets and desserts. Contains 1/3 the calories of other sugar substitutes.

May have an unpleasant aftertaste. Does not dissolve easily in beverages.

Contains a healthy combination of erythitrol and oligosaccharides. The substitutes include prebiotic fiber which aids in digestion and has a low glycemic impact. No need to adjust ingredient ratios.

Expensive. Some reports of gastrointestinal side effects and an unpleasant aftertaste.

For centuries, pure cane or beet sugar has been the most common form of food and beverage sweetener. While it’s inadvisable to consume large quantities of added sugar, entirely avoiding sucrose and high fructose corn syrup is a nearly impossible task. Sugar is naturally occurring in healthy fruits and vegetables, but it’s also often hidden in popular everyday foods.

Fortunately, there are a number of sugar substitutes on the market. Many are derived from natural sources and can be swapped out for sugar in recipes without sacrificing taste. These sugar substitutes also have the benefit of being much lower in calories than sugar and don’t necessarily produce unwanted glucose spikes in the bloodstream.

Indeed, diabetics and dieters alike can benefit greatly from the introduction of these sugar substitutes into their daily routines. But which one should you try? To learn more, read on. If you’re ready to buy, consider one of our top picks. 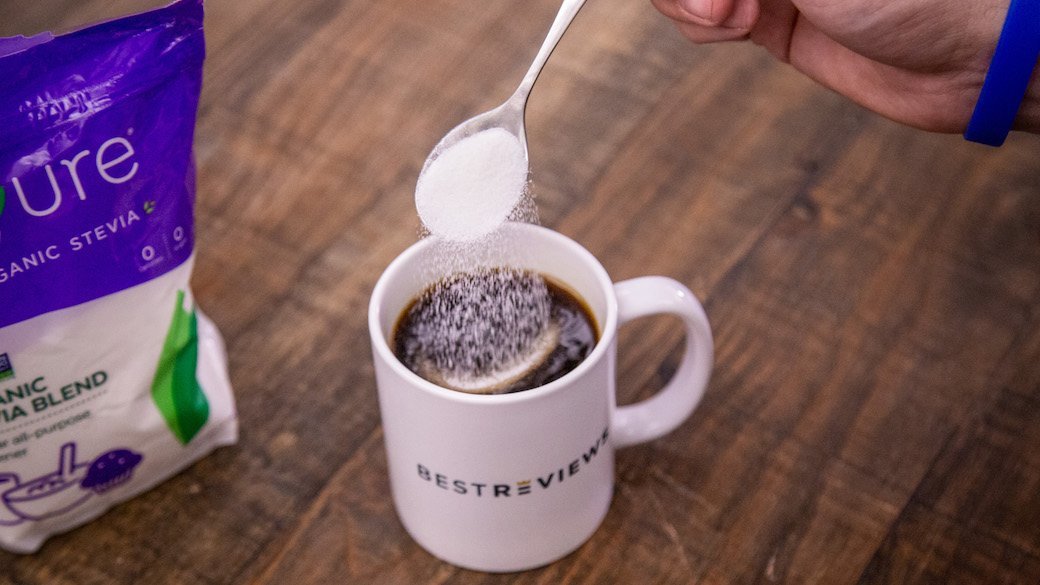 Did you know that the average American consumes about 22 teaspoons of sugar per day?

Why should you use sugar substitutes?

Wondering why it might be wise to avoid added sugar and use substitutes instead? Excess sugar consumption is not just bad for your teeth, it’s also associated with high rates of diseases like diabetes. Pure sugar is high in carbohydrates, which can cause unwanted spikes in blood glucose levels.

Sugar is also high in calories without having much nutritional value, so substitutes are useful for those seeking to lose weight. (Remember, though, that weight loss is more complicated than simply cutting out sugar. While incorporating alternatives may help reduce calorie intake, it’s not the only factor involved in shedding pounds.)

Here are the main types of sugar substitutes along with their pros and cons:

Artificial sweeteners, such as aspartame (Equal) and sucralose (Splenda), are used to sweeten drinks and other foods without adding calories. They’re useful for those who may want to avoid added calories but who still want to enjoy sweet beverages and treats. There’s some evidence, however, that artificial sweeteners may have unintended effects on our body’s processes, including hormone production. Some artificial sweeteners may also cause digestive issues in specific individuals.

Artificial sweeteners typically have zero or very limited calories and also tend to be extremely sweet, much sweeter than sugar, so less is required to sweeten foods. Most artificial sweeteners are a poor choice for baking, however, despite being ultrasweet.

Sugar alcohols, such as xylitol and erythritol, have fewer calories than sugar and occur naturally in fruits and vegetables. They’re often used to sweeten processed foods, and research shows that certain sugar alcohols actually improve dental health. The downside? Sugar alcohols may lead to gastrointestinal distress if consumed in large quantities.

Natural sweeteners are naturally occurring substances that may be used to sweeten food products (e.g., honey, maple syrup, coconut sugar). These sweeteners are nearly identical to sugar, though companies often use misleading claims to market products that contain natural sugars as healthier. Natural sweeteners are not necessarily healthier than sugar, however. Honey, for example, has been shown to reduce inflammation but is still metabolized like sugar and should be consumed in moderation.

Sugar substitutes are available in liquid and granular form.

Xylitol may not be a suitable option for sweetening your coffee since it doesn’t dissolve as well as other substitutes.

Difference between sugar and sugar substitutes

Some studies show that eating foods with zero-calorie sweeteners may have the opposite effect intended and may promote weight gain. For instance, some research shows that an increased intake of very sweet substitutes may boost one’s desire for sweetened foods. There’s also no telling what the long-term impact of consuming sugar substitutes may have on the body and overall health.

Certain substitutes may have immediate concerning effects on the body. Some people, for instance, may have allergic reactions to specific substitutes. Other individuals complain that alternatives like aspartame cause headaches and may act as a trigger for migraines. Several sugar substitutes also cause gastrointestinal distress.

Not all substitutes are made equal. You may need to add extra to your coffee or baked goods to sweeten them as you would with sugar. Other sweeteners may be extremely sweet, so you’ll need to add less compared to sugar.

Not all sugar substitutes are appropriate for baking. Some even lose their sweet taste when heated. Check package instructions to find out if a particular sweetener is suitable for use in baked goods.

Truvia’s Brown Sugar Blend is a combo of natural brown sugar and stevia, so the mix contains fewer calories than regular brown sugar, and you’ll need less of it to sweeten up desserts. We love this ultrasweet concoction for baking. Equal’s sugar packets are calorie-free and incredibly inexpensive. They’re supersweet, so you’ll need fewer Equal packets than you would regular sugar packets. Tastes great in coffee, tea, or other beverages. Sweet ’N Low is another single-serve option that’s vegan and contains zero calories. It’s best enjoyed in tea or coffee. Finally, if you’re seeking the perfect sugar alternative for baking, the Whole Earth Sweetener Blend includes both raw sugar and Stevia. Use this as a lower-calorie substitute and achieve the same baking results. 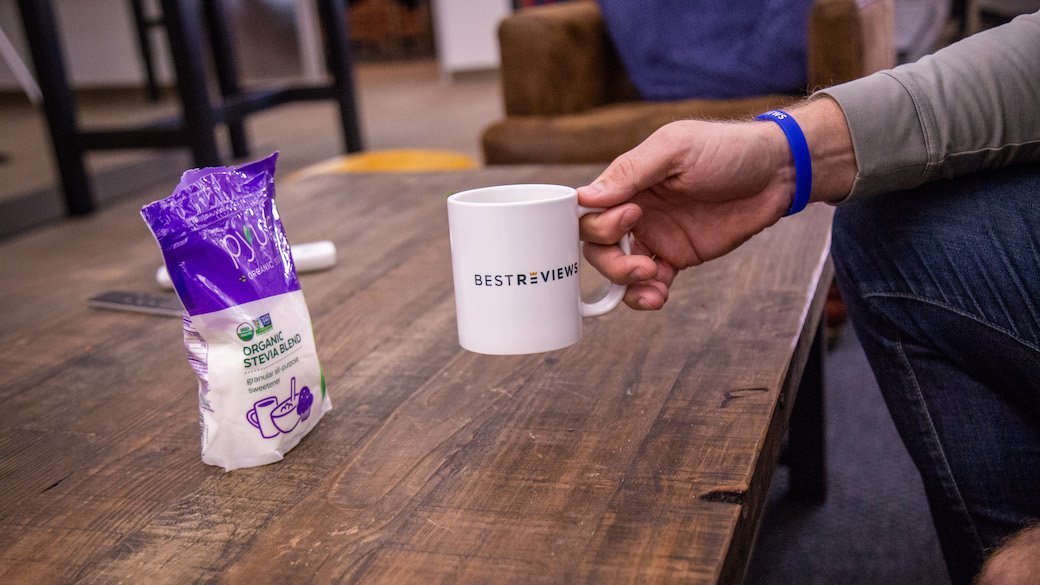 Not all sugar substitutes taste the same. Some have a slight aftertaste. You may need to test a few to find one that works for you.

Q. Are sugar substitutes healthier than regular sugar?
A. Not necessarily. While you may hear that sugar substitutes and alternatives contain vitamins and minerals that are not found in sugar, most sweeteners aren’t, in fact, nutritionally superior. Research shows that there are a few select substitutes that may have health benefits, but the evidence isn’t conclusive in all cases.

Q. Will I lose weight if I switch to sugar substitutes?
A. Maybe. But the bottom line is that weight loss results from a calorie deficit. If you swap your sugary beverage for something else that's high in calories, don’t expect weight loss to follow.

Q. Are artificial sweeteners carcinogenic?
A. You may have heard rumors that sweeteners like aspartame can cause cancer. According to the American Cancer Society, however, no hard evidence links aspartame consumption to increased risk of cancer.

Other Products We Considered
The BestReviews editorial team researches hundreds of products based on consumer reviews, brand quality, and value. We then choose a shorter list for in-depth research and testing before finalizing our top picks. These are the products we considered that ultimately didn't make our top 5.
Halefresh
Erythritol Sweetener Natural Sugar Substitute
Ideal
No-Calorie Xylitol Sweetener, Pack of 6
Anthony's
Natural Erythritol Sweetener
HighKey Snacks
Monk Fruit, Stevia, Erythritol Blend
BochaSweet
The Supreme Sugar Replacement
The team that worked on this review
× 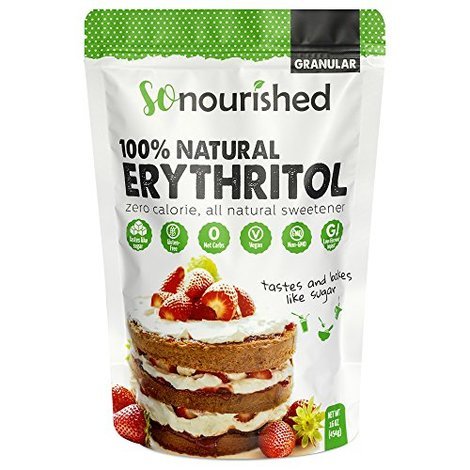 Erythritol is a corn-based sugar alcohol that tastes almost as sweet as the real stuff, but without the glucose spike. 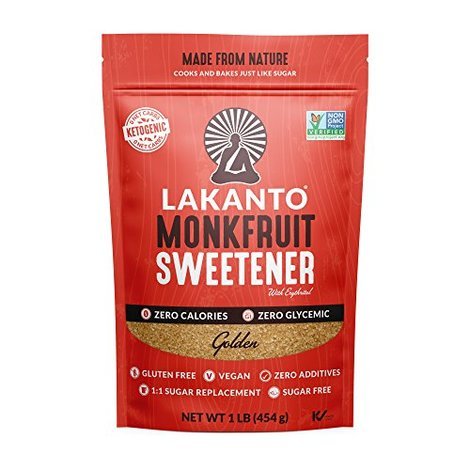 Monkfruit is a natural sugar, not a sugar alcohol, so it works well for both diabetics and non-diabetics on carb-restricted diets. 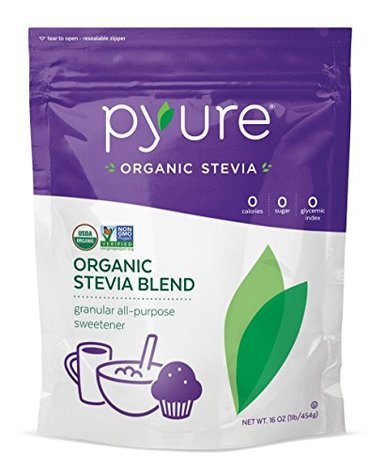 This stevia and erythitrol blend is ideal for those who prefer stevia as a substitute but want the low glycemic benefits of a sugar alcohol. 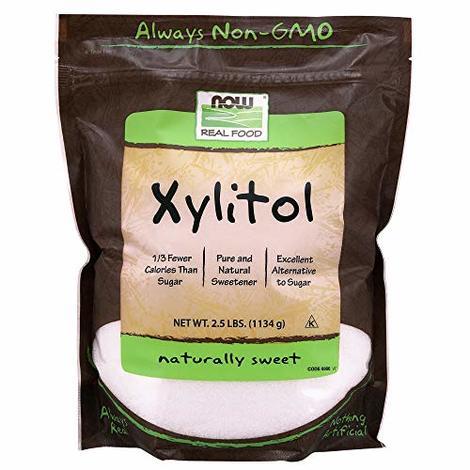 The sugar alcohol xylitol is a great choice for those who follow the keto diet, since it has a very low glycemic impact. 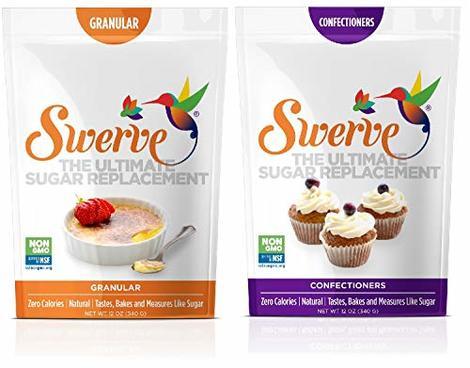