Not as powerful as other flashlights. Solar charging doesn't last as long as some other models.

Very inexpensive flashlight with solar panels built into it and that allow recharging with sun or a hand crank.

Extremely lightweight at just 3 oz. Good for emergency situations, as it doesn't rely on a battery to power the LED. Uses a carabiner clip to simplify carrying. Allows for storing a charge with the solar panels or hand crank.

Offers an extremely bright LED that can project the light up to several hundred feet. Flashlight has 7 different modes. Uses a magnet to attach itself to metal objects for convenience. Includes seatbelt cutter and window shatter tool for emergencies.

Solar power charging option is much slower than USB. Pricier than similar flashlights.

Delivers everything you need in an emergency tool and flashlight, but it's kind of expensive.

Gives you 7 different flashlight modes, so you can match whatever situation you're facing. Will run for several hours on a full charge. Will project the light from the LED over a distance of up to several hundred feet. Also can use USB to charge it.

Costs more than other solar powered flashlights. Not as bright as some others.

Whether you’re experiencing a power outage or a vehicle breakdown on a dark country road, one vital tool you’ll want to have on hand is a dependable flashlight. Those without access to batteries or power to charge a flashlight can turn to a solar-powered flashlight to help them through such situations. These charged-by-the-sun flashlights are often sought by campers and hikers for their portability and reliability.

Anyone who wants to purchase a solar-powered flashlight can find many options with a wide range of features and tools. Factors to consider include brightness, charging method, and the amount of time it takes for the flashlight to reach a complete charge. Price matters, too, though you aren’t likely to encounter many outrageous prices when shopping for this handy little tool.

Our buying guide delves into charging methods, charge and run times, modes, price range, and other factors to know when shopping for a solar-powered flashlight. For your consideration, we also shine the spotlight on some of our favorite products. 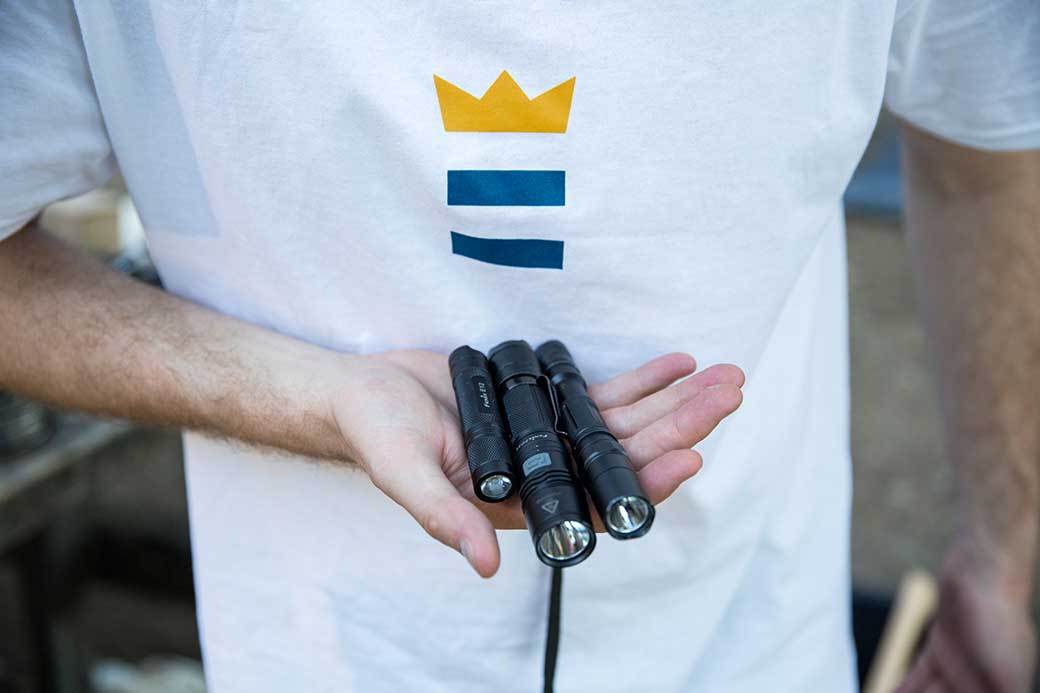 American Charles Fritts invented the first solid solar cell in 1883. While primitive, it made possible a wide range of solar-powered devices — including flashlights — that are used today.

While all solar-powered flashlights should offer durable construction, pay particular attention to this if you plan to use your flashlight outside more often than inside.

Solar-powered flashlights for indoor use — an emergency back-up flashlight or one you stash in a bug-out bag — generally don’t need to be as sturdy as those used for camping. If you feel an indoor flashlight may end up playing an outside role at some point, definitely pay more attention to features such as waterproofing.

Solar-powered flashlights vary considerably in terms of size and weight. If you plan to use it on a hike, you want one that is more compact and lightweight as opposed to bulky and heavy. Flashlights tend to be bulkier when additional elements such as window shatter tools are built into them. Lower-quality (and bulkier) solar panels can also increase a flashlight’s size and weight. For camping and hiking use, you may be better off choosing a stripped-down flashlight with fewer features and tools and better solar panels.

There are three primary ways a solar-powered flashlight can be charged. The best flashlights incorporate at least two of these methods.

The length of a “run time” is a big consideration when choosing a solar-powered flashlight, particularly if you need to go for long stretches between recharging sessions. While a charge can last for as little as three hours or as much as ten, the average is around four to seven hours of run time. A flashlight that can run on a dim or low mode lasts considerably longer than one constantly running on high.

The recharge time for a solar-powered flashlight varies from model to model. Other factors also affect the recharge time, including method of recharging (solar is slow, USB much faster), the size and efficiency of the solar panels, and even the angle and intensity of the sunlight. You should plan on it taking several hours to bring your flashlight up to a full charge.

Solar-powered flashlights all typically use one or more LED bulbs, but some produce much more light (measured in lumens) than others. Flashlights that can produce up to 200 lumens or more are able to light up to several hundred feet. A brighter light is more useful outdoors than indoors, with the trade-off being that a brighter light also drains a flashlight’s charge faster.

Did you know?
Solar-powered flashlights generally use LED lights, as these require less power than incandescent bulbs.
STAFF
BestReviews

The modes of a solar-powered flashlight refer to the various ways you can use it to produce light. The more modes a flashlight has, the more useful it is in a variety of situations, and the more control you have over how long your charge will last.

Solar-powered flashlights may have between three and seven modes. Some common modes include three types of light intensity (low/dim, medium, and high), slow or rapid flashing lights (either in white or red) for emergencies, and side running lights for lower light situations.

The majority of solar-powered flashlights feature some form of clip or other attachment to more easily carry it around or use it. This is often in the form of a carabiner clip, which can be used to attach the flashlight to a backpack, belt, or keychain.

A solar-powered flashlight with a magnet can be mounted to a car or other metal surface for use as either a set light source or a work light.

Solar-powered flashlights often incorporate additional survival and emergency tools. These can be a real bonus depending on how you plan to use your flashlight, though they tend to add weight and bulk to the flashlight.

Some common additional tools include:

Expert Tip
If you will be primarily using your solar-powered flashlight for camping, try to choose one in the 100 to 150 lumens range.
STAFF
BestReviews

Inexpensive/mid-range: At a lower price point, you find simple flashlights with few bells and whistles. If you are just in the market for a simple solar-powered light source to throw into an emergency kit, this should fit your needs.

Expensive: At higher prices are flashlights that burn brighter, hold a charge longer, and offer multiple methods for recharging. You can also find more multi-tool emergency/survival flashlights here, offering tools such as compasses, window shatter tools, and a variety of emergency lighting modes.

Did you know?
The best sunlight for charging a solar-powered flashlight is from a sun that is directly overhead in a cloud-free sky.
STAFF
BestReviews

We had a few additional solar-powered flashlights we wanted to include here that caught our eye. The X-nego Solar LED Flashlight is both compact and lightweight, yet puts out an impressive 300 lumens. This inexpensive bundle includes two flashlights. If you want a flashlight that also functions as a lantern, check out Keytas Operkey LED Camping Lantern and Flashlight. It features 12 LED bulbs in all and collapses for easy storage. 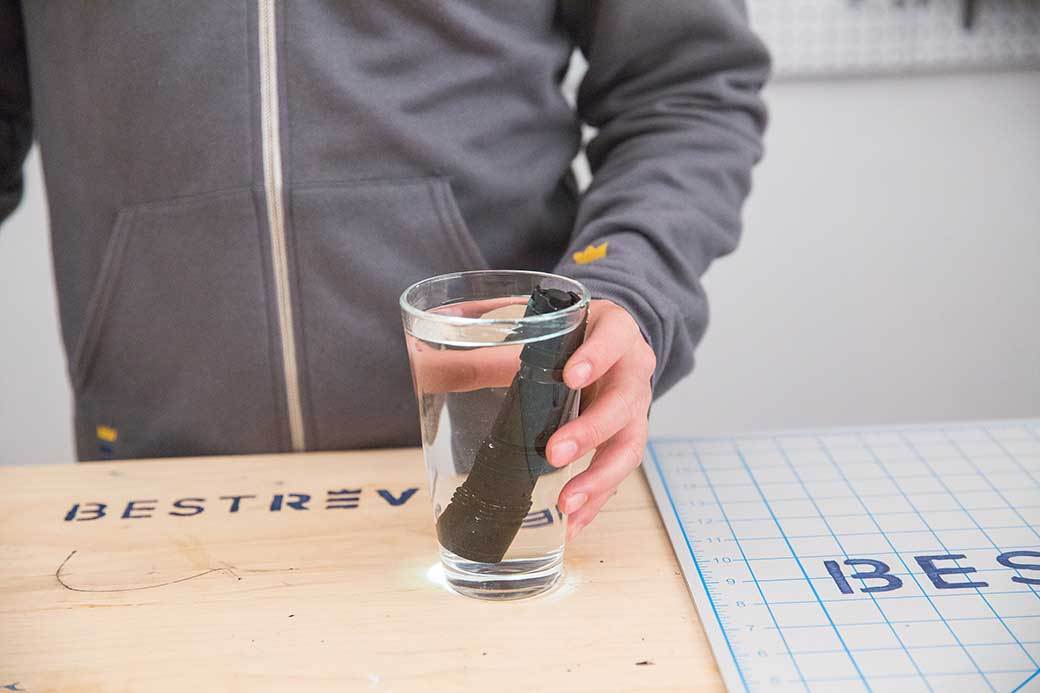 A solar-powered flashlight that is waterproof and submersible is a great option for kayakers or other boaters.

A. Their environmental “footprint” is considerably better than a traditional flashlight. Because they have a rechargeable battery, solar-powered flashlights don’t send dead batteries to the local landfill — a plus for the landfill and your wallet. Furthermore, if you recharge it solely by the sun, you aren’t using power from the grid, which is better for the environment.

Q. Can solar-powered flashlights be used to charge a phone?

A. This largely depends on the model you buy. Some function as a solar power bank, capable of powering up a phone or other device. If this is an important feature for you, try to verify how effective it is at this (some fall short of their claims), and whether the flashlight has safety precautions built into it such as overcharge or overcurrent protection.

Q. How long will a charge last if the flashlight is not being used?

A. Some solar-powered flashlights claim they can hold a charge for years without being recharged; others, several months. To be on the safe side, it is best to top off the flashlight every six months or so, whether you’re using it or not. If the flashlight is exposed to more temperature extremes (high or low), you should top it off more frequently. 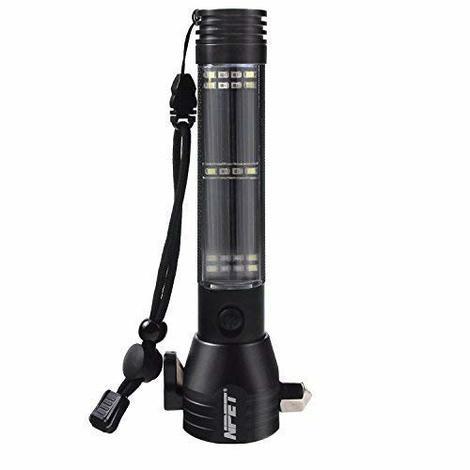 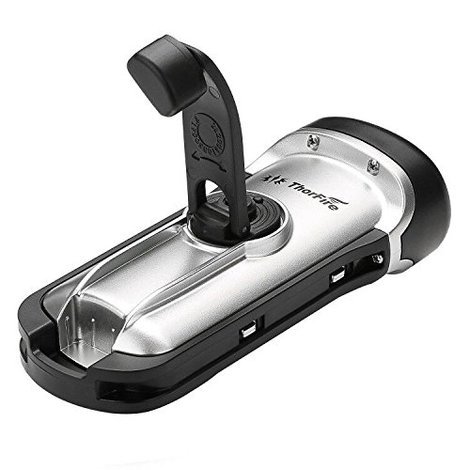 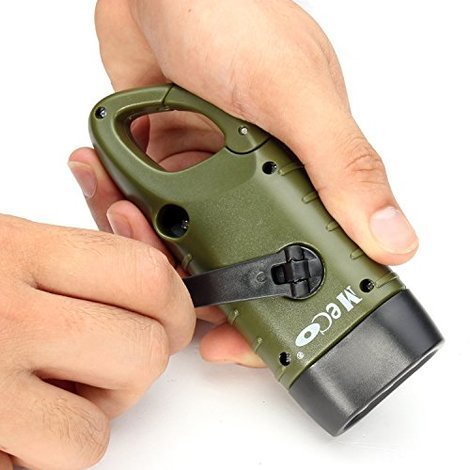 Very inexpensive flashlight with solar panels built into it and that allow recharging with sun or a hand crank. 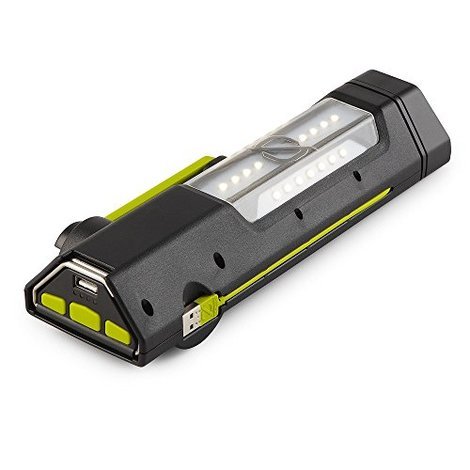 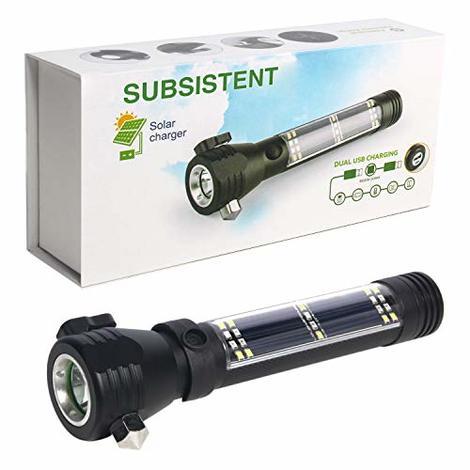 Delivers everything you need in an emergency tool and flashlight, but it's kind of expensive.