This portable projector is as pricey as it is small.

This compact and portable full HD projector is an excellent choice for viewers who heavily rely on streaming apps.

Its fan seems a bit louder in energy-saving mode.

This portable projector’s impressive picture quality is an excellent value for the price.

Its LEDs are distractingly bright.

This lightweight, portable, and decently priced projector is a value-packed model for anyone on a budget.

Its integrated speaker is average at best.

Bright, vibrant, and simple to operate, this portable projector is worth your consideration if you appreciate wireless connectivity.

A little chunky for a portable projector.

A portable projector takes the convenience of a normal screen projector and shrinks the form factor down to something that can fit into a bag or pocket. Popular in business environments for presentations or on-the-go viewing, a portable projector makes it easy to view a computer or smart device screen without a dedicated monitor.

The most important feature of any portable projector is image quality. The projector's resolution, light source/brightness, required throw distance, and surrounding environment all affect this. In most cases, a portable projector cannot rival its larger counterparts in terms of quality, but it can create an image good enough for presentations or general computer use.

Read on for our complete guide to portable projectors. You will learn about important features and considerations that will help you find the right projector. We have also included some top product recommendations to get you started on your search. 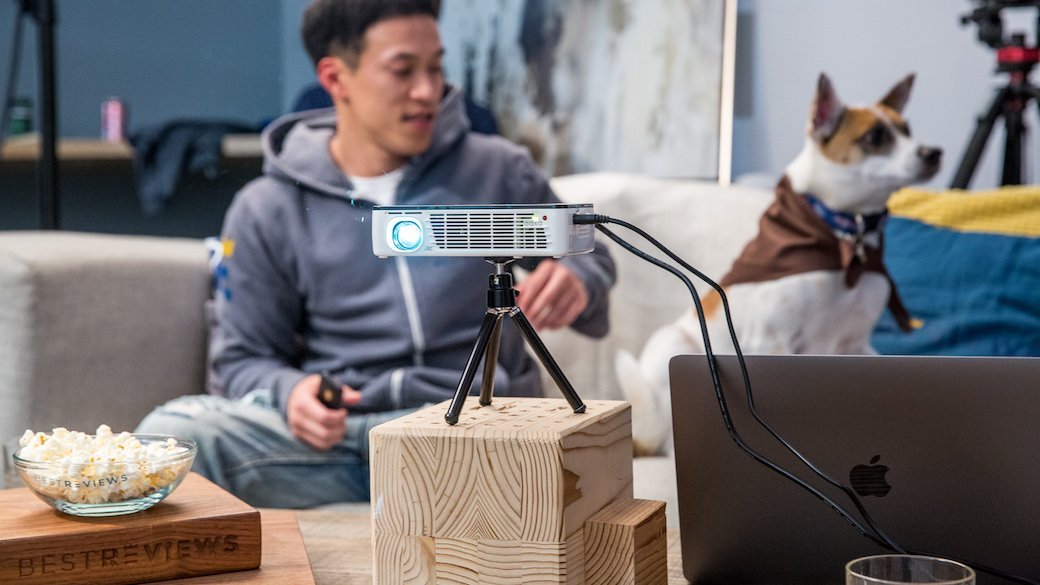 Don’t have much experience with home theater projectors or other types of projectors? Owning a portable projector is a great way to learn the basics of screen projection.

A projector is only as good as the images it produces. While image quality depends on the surrounding environment since it's projected onto a wall or other vertical surface, it is mainly influenced by the technology within the projector itself. When choosing a portable projector, consider the image size and brightness to get a sense of the quality you can expect.

The projector's image size is a measurement of how large the image will appear when it's in focus. With a traditional projector, you can adjust this size with a lens. But since most portable projectors can't zoom in and out, there is less adjustability when it comes to the image size. In general, you can expect to have an image between one or two feet.

An image's brightness impacts how clear and visible it is in different environments. Surrounding light can affect the visibility of an image. For example, a higher brightness level would be necessary to see a projected image in a brighter room. Portable projectors lack the brightness of larger models since they use energy-efficient LED lamps that have up to 1,500 lumens versus the 2,500+ lumens of larger projectors.

The throw distance is the amount of space required between the projector and the projection surface to see an image clearly. This minimum distance determines how much space you will need in order to use the portable projector with the best image quality possible.

A short throw distance between two and eight feet is common for portable and compact projectors. The shorter the distance, the more flexibility you'll have with placement of the projector. Most portable projectors can be placed on a table or desk to project a rectangular image of around 24 x 44 inches on a wall a few feet away.

A projector requires a central light source to cast an image or video onto a surface. Larger projectors meant for home theater or business use have powerful bulbs, called lamps, or lasers capable of projecting the image over a larger distance. These light sources tend to be more powerful and bright for the larger image size.

Given the compact design of portable projectors, most lamps and lasers are too big to fit. Instead, portable projectors use LED lights that are smaller and more energy efficient. This makes them perfect for portable use where the projector doesn't have to cast the image very far. LED lights also have a longer lifespan before burning out and better color production.

Despite the portability benefits, LED lights do have some limitations. The main drawback is a limited brightness compared to traditional lamp and laser projectors. This can be a problem in darker environments or with longer distances between the projector and the projection surface. As a result, portable projectors aren't as good for multimedia or home theater use as larger models.

Much like a computer monitor or TV, projectors have a certain number of pixels they use to create images and videos. The number of pixels, also known as the projector's resolution, influences how crisp and detailed the image is. Higher resolutions are better for multimedia formats like movies and games.

Normal projectors have resolutions going all the way up to 4K (4,096 x 2,160 pixels), but portable projectors tend to be more limited. On average, a resolution of 854 x 480 pixels is good enough to enjoy the projected screen for business or general computing use.

High-end portable projectors manage to squeeze a true HD (1,920 x 1,080 pixels) resolution into the compact frame. This resolution is better for movies and gaming where the smaller details can enhance the viewing experience. In general, it's best to get as many pixels possible within your budget.

Since a projector isn't a computer on its own, it requires some kind of connection to actually cast an image onto a flat surface. The connection takes the image (or duplicates it) from the source device and sends it to the projector for casting. To connect to a device, portable projectors use a number of different connector styles and inputs.

USB inputs are quite common on portable projectors since the plug doesn't take up too much room and can handle a large number of screen resolutions. The cables come in different lengths, so you can keep the projector and device separated physically without worrying about bridging the gap.

Some pricier portable projectors use the high-quality HDMI inputs that are common on larger projectors and typical televisions/computer monitors. The HDMI connection can handle higher resolutions and carry audio in addition to video. Unfortunately, HDMI outputs on mobile smart devices are less common, meaning you may need an adapter cable to use a smartphone or tablet.

Did you know?
Portable projectors can sometimes work with laptops or smartphones/tablets, depending on the input type and required connection cable.
STAFF
BestReviews

Much like the size, the cost of a pocket projector is usually a mere fraction of the cost of a full-size projector. It's easy to find an affordable portable projector that's capable of producing a high-quality image with a little bit of setup and positioning.

Projectors that fall under $100 are most often basic models that require a separate device to produce an image. While most are limited to an 840 x 480 native resolution, you can find a few HD projectors in this price range as well.

Most high-quality portable projectors sit between $100 and $250. In this price range, projectors either offer a full multimedia experience (movies, TV shows, gaming, internet, and so on) or a smaller-than-average design. Some projectors also come with built-in speakers.

Beyond $250, the selection of portable projectors shrinks. The few that are available tend to be feature-rich. The projection technology includes higher resolutions, high-contrast colors, and brighter lamps. Convenience features like wireless connectivity are also common.

The range of portable projectors has drastically expanded in recent years, meaning you can find as much variation in features and capabilities in smaller projectors as their larger counterparts. For example, the GooDee Pico Projector is one of the smallest projectors available, beating out other "pico" projectors in terms of compact design. On the opposite end, the Optoma ML750 Projector, with its 700- to 1,000-lumen lamp and wireless connectivity, is about as close as you can get to a full-featured projector. 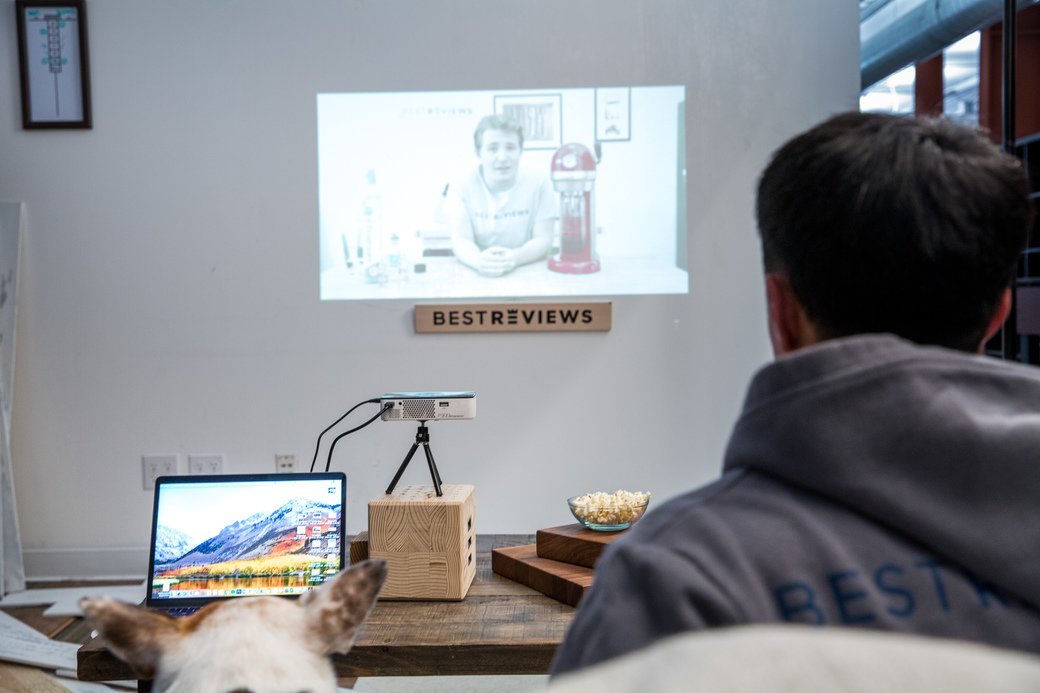 A full HD portable projector will allow you to play most movies and television shows without reducing the projection quality.

Q. Do portable projectors get hot after a lot of use?

A. Unless the projector has adequate ventilation designed into the shell, you can expect the body to get hot after a while. In most cases, this heat won't damage the projector but may be something to consider with younger children or pets.

Q. Do I need a laptop or device to use a portable projector?

A. For simple projectors, yes. High-end projectors that include an operating system like Android and wireless connectivity, however, can often stream videos straight from Netflix, Hulu, or YouTube without the need for an image source.

Q. Can I use a portable projector outdoors?

A. You can generally use a projector outdoors at night when the environment is dark enough. However, you shouldn’t use the projector in bad weather unless it has a sealed case to shield it from moisture and potential damage.

A. Some projectors have a small built-in speaker on the body. You could use dedicated speakers, too — they’re easy to connect, especially if the projector has Bluetooth to connect the speakers wirelessly.