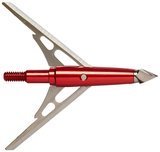 2.3" stainless steel blades are extremely durable and sharp for repeated use. Profile of the hunting tip is extremely aerodynamic for better accuracy and penetration. Uses a durable metal tip. Features shock collar technology.

Not recommended for light draw weights. 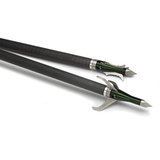 A good basic broadhead that is extremely durable for heavy-duty use.

Offers maximum velocity and accuracy. Uses a retracting mechanism for the three blades for safe storage when not in use. Blades eliminate the need for separate O-rings during heavy acceleration. Comes in a pack of 3. 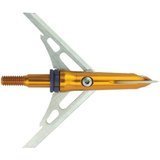 One of the best broadheads for better reliability and results when hunting with a crossbow.

Comes with a 2-blade design, each with a 2" cutting surface for extra damage and reliability. Ferrule alignment technology improves aerodynamics. Fits to any 1" arrow tube by simply screwing on for a tight fit. Comes in package of 3.

Blades can fail to deploy in tougher hides such as deer flesh. 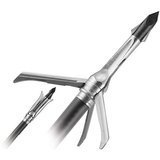 Great value pack of broadheads that comes with 3 separate tips that fold up.

Very simple and reliable construction with blades that won't fail to deploy and won't break off at high speeds. Blades are sharp for thick animal hides. Secures quickly to a number of different types of hunting arrows. Suitable for big game. 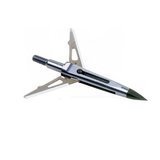 A great pick for beginning hunters that offers greater penetration and reliability compared to other budget broadheads.

Simple 2-blade construction with 2" cutting surfaces arranged in aerodynamic fashion. Cutting edges are large enough to retain a strong grip in the animal hide after a successful hit. Spring clip design. Effective on deer or turkeys.

Blades can break off when retrieving the broadhead.

Bow hunting is an intense experience. It requires quiet, concentration, and skill. You also need the right equipment, and at the sharp end, mechanical broadheads are a popular choice.

Many bow hunters wouldn't use anything else, yet there's no denying that mechanical broadheads have occasionally had a bad rap. So how do you know whose advice to trust?

That's where BestReviews comes in. Our mission is to bring you unbiased information that can help you make the right shopping decisions. We've researched the different kinds of mechanical broadheads available, checked the pros and cons, and looked at the advice offered by several hunting experts to bring you this shopping guide. 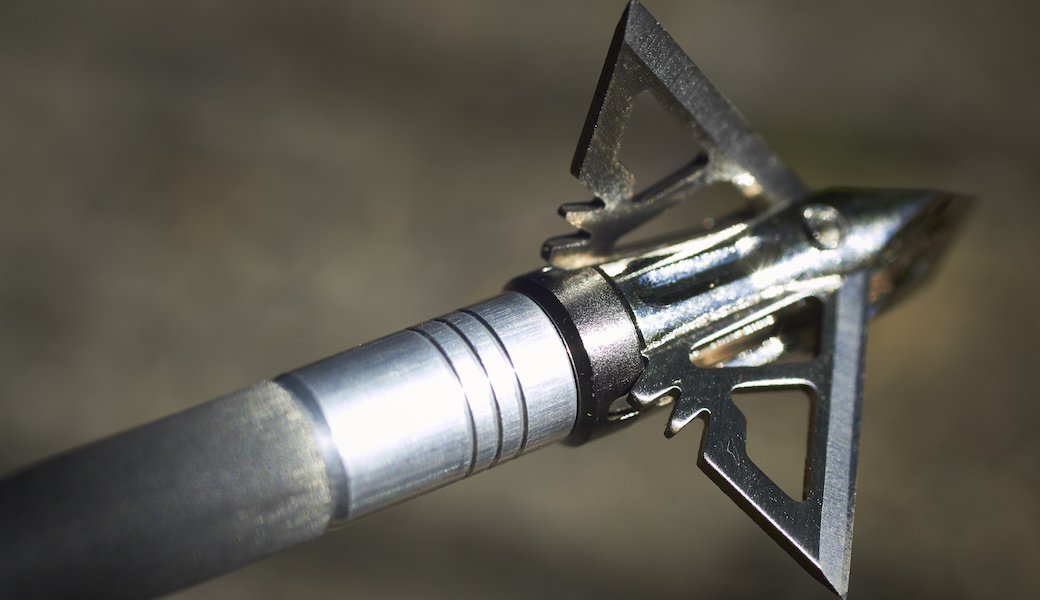 A good edge is essential, but mechanical blades are small and difficult to hold for sharpening. Sharpening kits can be a good investment, but replacing the bowhead is easier. Check prices and availability before you decide.

Why choose a broadhead?

Some game takes a lot of stopping, and an arrow with a standard tip can let down even the best hunter. Field points are great for target shooting but just don’t have the penetrating power when it comes to the tough hide of deer or wild hogs. Turkeys are also surprisingly tough old birds!

The answer is to use a broadhead, which combines a fast-penetrating point with razor-sharp blades. These can pierce hide with ease, break through bone, and create a wide wound channel that leads to rapid blood loss. Sounds gory? It's an effective way to ensure a kill and much more humane than letting quarry wander around injured.

In theory, attaching a broadhead to your shaft slows it down. That's true, but a heavier object – while marginally slower – has greater momentum, and that means more penetration, which is particularly important with big game. Put simply, a broadhead carries greater impact downrange. It substantially increases your chances of a swift kill.

Premature blade release is the major criticism of mechanical broadheads. O-rings and shock collars can keep this from happening.

There are four types of broadhead: fixed, mechanical, hybrid, and speciality. Bow hunters eventually develop their own preferences, and may have more than one set, switching from one type to another to suit the game and the environment. Often fixed broadheads are favored for their reliability, though they demand greater accuracy from the archer.

However, those new to broadheads find mechanical models easier to learn. The wider wound channel also means there's more margin of error. If you're a little off target with a fixed head, you might only wound game. With a mechanical broadhead, the same shot is more likely to kill quickly and humanely.

Mechanical broadheads have blades that are either completely or mostly concealed within the body of the arrowhead while in flight. The blades extend on impact with the target.

Hybrid broadheads are a comparatively recent introduction but are becoming increasingly popular. Hybrids are a combination of fixed and folding blades.

Speciality broadheads aren't common. These are usually fixed and used for small game and turkeys. The heads are smaller, so flight is more like that of a field point.

Check your state's hunting regulations. In some places, it’s illegal to hunt big game mammals using barbed, mechanical, or moveable blades – even though it’s legal to sell them! It's important to check specifics as well because the rules differ by species, too.

A mechanical broadhead needs to do three things: stay closed during flight, open efficiently on impact, and cut a large wound channel. It sounds simple, but there are several different approaches.

If a broadhead opens in flight, it invariably ruins the shot. However, it's seldom a problem with good-quality models, which employ one of the following:

You need to practice, but you don't want to blunt your best mechanical broadheads on a wooden or paper target. For that reason, some makers include a practice point with the same weight and aerodynamics but without the lethal intent.

Good-quality mechanical broadheads cost somewhere between $30 and $50 for a pack of three. Very little falls outside this range – even the best hybrids. While it doesn't give much room for saving money, it does mean you can largely make your choice based on technical specifications and personal preference without incurring huge penalties for big-name products.

Are the most expensive models worth $20 more? While to some extent you're paying for recognized brands, each has a reputation for the highest quality. The additional investment buys unquestionable reliability and unbeatable precision. 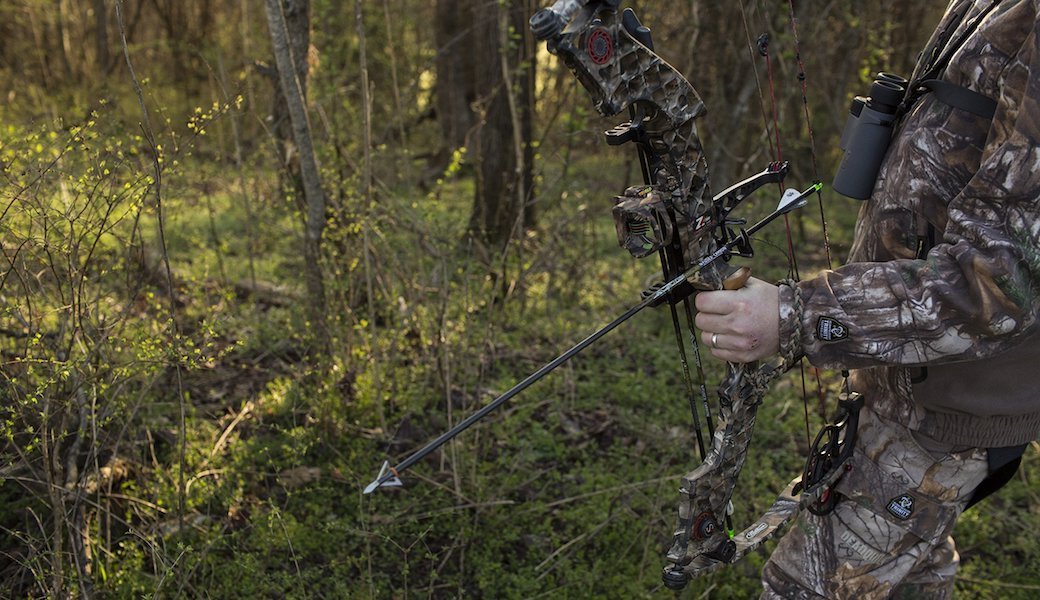 Titanium isn't necessarily a better material for a mechanical broadhead, but because it's more expensive, it usually indicates better product quality and higher standards of precision.

Q. What are the “grains” used to measure weight?

A. The system dates back to medieval times when seed grains were the most accurate way to measure small amounts. These were used for precious metals, gemstones, and gunpowder. Originally, the seed was taken from the middle of an ear of barley, a seed unaffected by moisture and therefore more accurate. Using grains as a weight system allows for fine margins. One grain is just 0.002 of an ounce. So a 100 grain broadhead weighs 0.228 ounces. A 125 grain broadhead weighs 0.285 ounces. In most fine measuring, grams have taken over as the de facto standard, but in armory, grains are still common.

A. Expert advice is usually to use 100 grain broadheads with lightweight carbon and the lighter aluminum shafts, 125 grain with heavier aluminum ones. That said, the draw of your bow and personal preference are also important. The more powerful your bow, the less impact weight has on distance (we're only talking a difference of 0.057 ounce here). Additionally, more weight gives more momentum and potentially a cleaner kill. However, you shouldn’t try to put a 100 grain head on a heavier shaft. There's then too little mass at the front of the arrow, and flight can be erratic as a result.

Q. Which is better, two-, three-, or four-blade broadheads?

A. This is a question that divides bowhunters. While largely a matter of personal preference, there are some physical considerations. If all other things are equal (weight, sharpness, aerodynamics), a two-blade mechanical broadhead will penetrate more easily than a three- or four-blade model. If you have a comparatively low draw weight bow, a two-blade head is more lethal.

However, modern compound bows are capable of producing tremendous power – driving any head with more than enough force to be effective. In that case, three- and four-blade heads (the latter are usually fixed or hybrids) will maximize penetration, tissue damage, and blood loss, so you're more likely to deliver a kill shot. 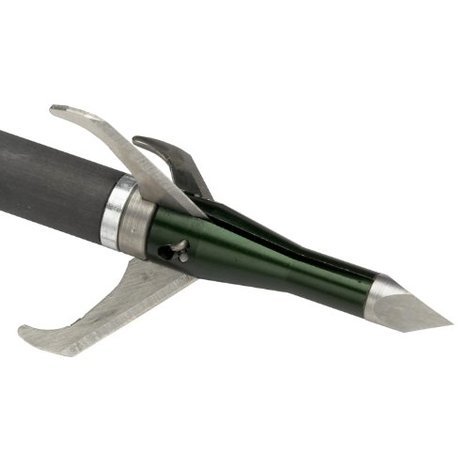 A good basic broadhead that is extremely durable for heavy-duty use. 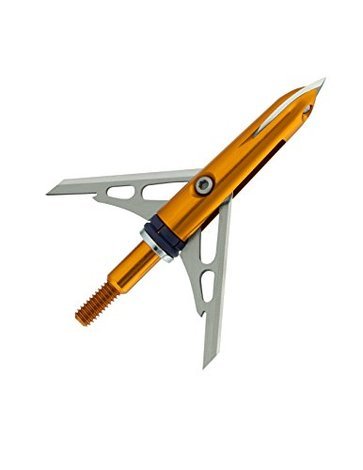 One of the best broadheads for better reliability and results when hunting with a crossbow. 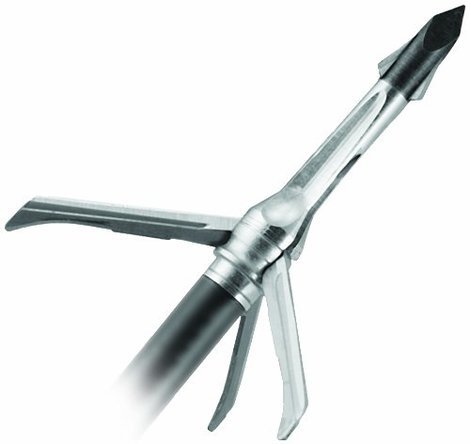 Great value pack of broadheads that comes with 3 separate tips that fold up. 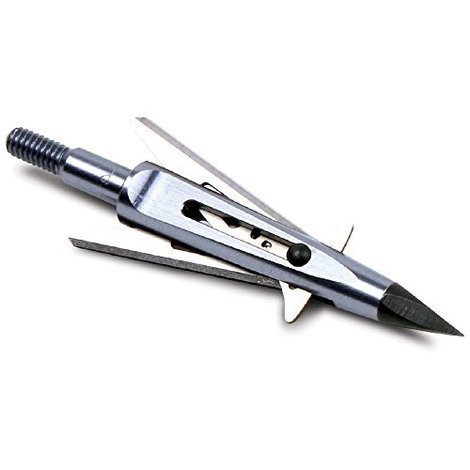 A great pick for beginning hunters that offers greater penetration and reliability compared to other budget broadheads. 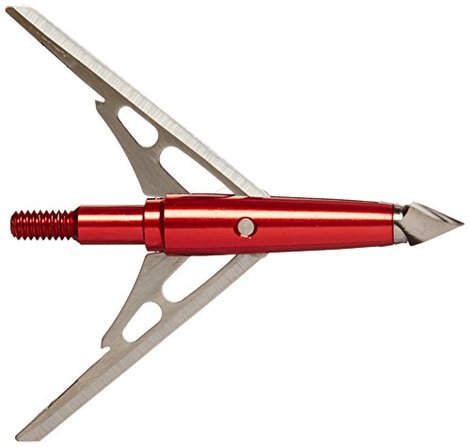