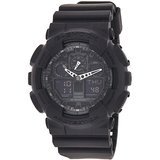 A reliable analog-digital model with many features.

An extra-large, extra-durable watch with G-Shock's usual bevy of features, like its daylight saving mode, stopwatch, four alarms, and auto-calendar. The white hands are very visible, and the rugged case will hold up.

Dim LED backlight makes the digital screen hard to read in the dark. 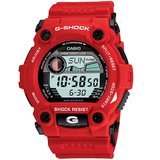 A comfortable watch that won't crowd your wrist, and the display can handle low temperatures. Tide and moon display, stopwatch, countdown timer, and auto-calendar are some of the features.

The smaller digital screen can be difficult to read.

One of the smaller G-Shock watches, featuring atomic timekeeping.

Ideal watch for those who need something durable and lightweight. The solar-powered battery can last six months without light. This analog-digital model features a discreet digital screen, and the analog hands can be easily shifted if they cover the display.

The small dials and digital screen can be difficult to read, especially in the dark. 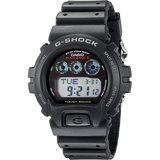 A solar-powered digital watch with atomic timekeeping for exceptional accuracy.

Multiple features including an automatic calendar, atomic timekeeping, multiple alarms (including a snooze alarm), and countdown timer. The watch is also shock-resistant and has an auto backlight function that turns on with a flick of the wrist. 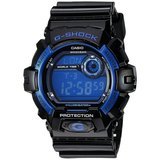 Sporty design with an LED that activates with a flick of the wrist.

A simpler, but not smaller, G-Shock watch with a powerful backlight. This more colorful design is easy to read, and despite its size the watch is very comfortable. Features auto-calendar and a 55-millimeter case.

You might need your smartwatch to send texts and thumb through your calendar, but for the die-hard adventurer (and those who just want to look like one), a G-Shock watch is the only timepiece that will do.

The G-Shock watch was created by engineer Kikuo Ibe, Casio’s lead watch designer in the early 1980s, who wanted to develop an indestructible watch. Since the first G-Shock watch was launched in 1983, over 70 million of the watches have been sold, and new models come on the market every year. That’s a lot of options if you’re thinking of buying one.

BestReviews can help. We’ve investigated these famous watches to make it easier for you decide what G-Shock model will best fit your lifestyle and budget. Our informative shopping guide can help you on your way to your next purchase. 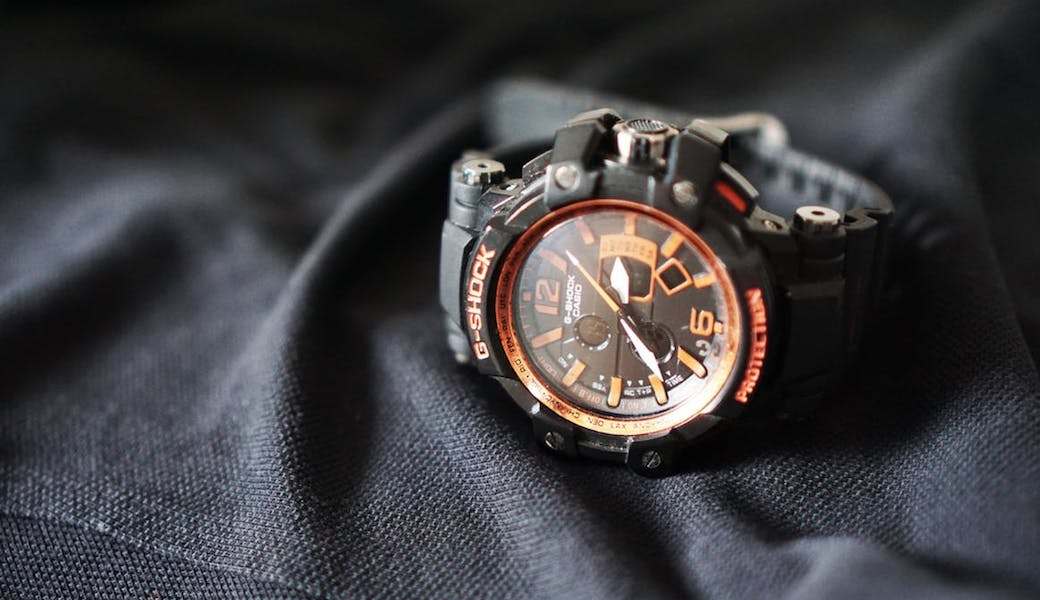 G-Shock creator Kikuo Ibe was also inspired by construction workers he saw around the office. He noticed they didn’t wear watches while using jackhammers because of the vibration.

What is a G-Shock watch?

Simply put, the G-Shock is the “toughest watch on the planet.” Or at least that’s the reputation the brand has garnered.

After dropping and breaking a watch passed down to him by his father, Casio designer Kikuo Ibe and his team set out to design a watch that could pull off the “triple ten” – a watch with a ten-year battery that could withstand ten atmospheres of water pressure and a ten-meter drop.

It took two years and over 200 prototypes, but eventually they nailed it with the DW-5000C. The way it works is the timekeeping module is cushioned by soft gel points within a hollow case. Ibe got the idea while watching children bounce balls at a playground. The strap also helps secure the watch to protect its inner working from impact, G-forces, and heavy vibration.

People love these watches for their quartz accuracy and rugged aesthetic. You’ve seen them on Navy SEALs, action movie stars, and everyday men and women. With so many dependable options to choose from, these watches are a great choice for people with active lives or people into the streetwear look. 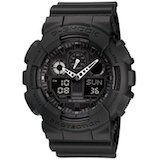 Trusted and beloved by many, this extra-large analog and digital Military series watch features a matte-black resin casing that’s shock resistant and water resistant to 200 meters. It has the full range of features found in the most popular G-Shock watches, as well as an auto-calendar preprogramed to 2099.

With so many G-Shock models on the market, and more new ones introduced every year, there are a lot of features to consider when looking for the right watch for you.

Each G-Shock watch is digital and uses a twisted nematic liquid crystal display (LCD). The screen size and display depend on how many and which special features the watch possesses. Some watches have a purely digital display, while others are digital and analog. On the higher end of the market, G-Shock has introduced a few touchscreen options.

The battery should last a minimum of two years, unless you frequently use the Bluetooth feature or the radio setting. If you use the light or alarm sparingly, the battery can last over a decade. Some users report getting a whopping 15 to 17 years of use out of their battery.

A G-Shock solar battery can last up to seven months without a charge. However, all it needs is ambient light to juice itself back up, so anyone goes outside or uses electric lights should be good.

Different models come in a wide range of sizes, so you can pick one that won’t overwhelm your wrist. There are smaller G-Shock watches that are 70% of the size of the average models. There are also midsize options that have a face that is 1.4 mm smaller and 0.8 thinner than standard models. And there are extra-large watches that measure 55 mm x 51.2 mm x 16.9 mm.

All G-Shock watches resist water to varying degrees. You can wear any G-Shock while jet skiing or swimming, but you’ll need a watch designated “Diver’s Watch 200m” for scuba diving. This includes watches from the Frogman series. G-Shock’s Mudmaster series is specially designed to handle water as well as muddy conditions without the sludge getting inside the watch.

It would take a few hours to go through all the various collections and series offered by G-Shock. For example, Gulfmasters are tailored for marine environments, including a depth sensor and barometer/altimeter. The Rangeman series focuses on aviation features like altitude, barometric pressure, temperature, and direction readings. G-Shock is even working on their own solar-paneled smartwatch options to combine the durable body and adventure features with high-tech possibilities. 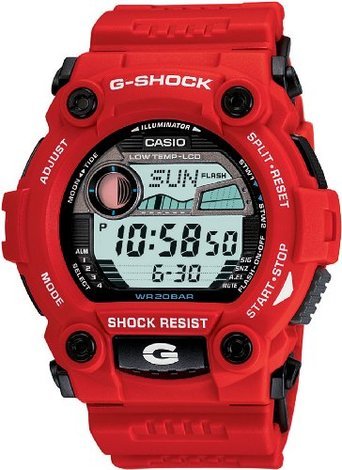 Just because a watch is “water resistant” doesn’t give you a free pass to wear it in the shower. It isn’t necessarily soap or shampoo resistant.

If you damage your watch, you can visit an authorized Casio service center for repairs. With proper care, your watch can last a lifetime.

Make sure to rinse any salt and dirt off your watch after wearing it in the ocean because these can build up over time. Treat your G-Shock like you would any other watch while cleaning it – with a soft, damp cloth and attention to detail.

Prices for G-Shock watches vary widely depending on the type of watch and the number of special features it has, the materials used to make the casing, and the rarity and collectibility of the model. You can expect to pay between $35 and $5,000 for a G-Shock watch.

A standard, non-specialty G-Shock watch usually costs between $35 and $60.

You can find watches with special features, such as solar batteries, different colorways, mud-resistant casings, or surfing accessories, for between $60 and $120.

In the $120 to $350 range, you’ll find advanced special features and feature packages, such as the Sky Cockpit with a compass, thermometer, and the ability to measure and remember travel data. You can also find stainless-steel and titanium casings and bands in this range.

Although a G-Shock isn’t as pricey as a Rolex, the higher-end models can set you back close to a grand. The price range depends on the speciality, materials, and rarity. Some of the aviation models sell for about $650, while Gulfmasters cost over $800. True collectors’ models will cut even more deeply into your wallet. For example, the going price for a Bluetooth GPS radio-controlled, solar-powered atomic option is currently $5,000. 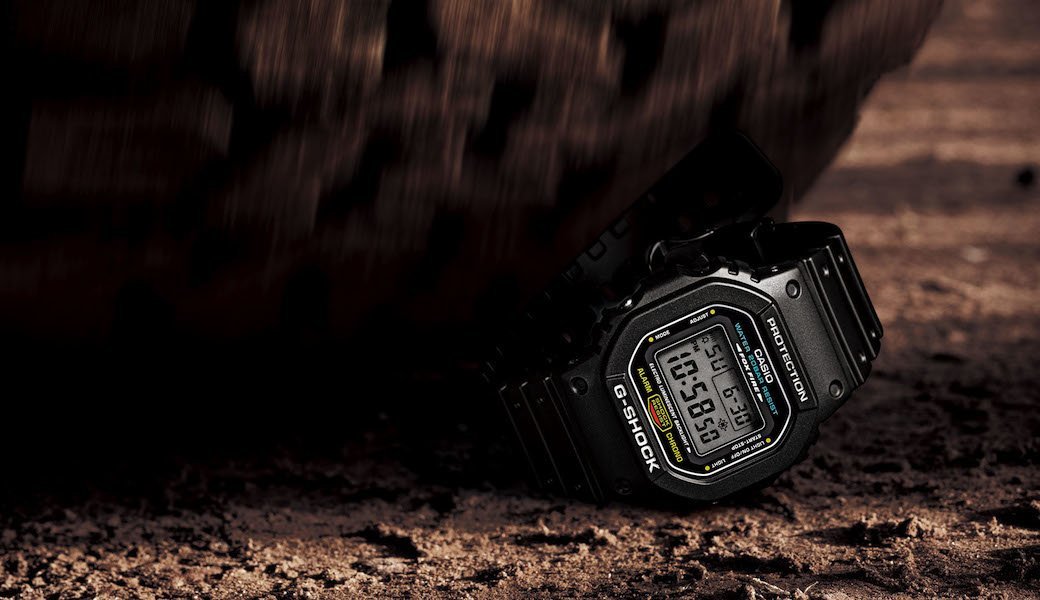 The “G” in G-Shock stands for “gravity.” The design team tested the watches by dropping them from third-floor windows. Today, engineers have automated tests that include everything from smashing the watches with hammers to shocking them with electricity.

Q. Do G-Shock watches have a lifetime warranty?

A. Although these watches are built to last, they typically come with a two-year warranty. However, MT-G and MR-G models have a three-year warranty, which makes sense considering these are much pricier than other G-Shock options.

Q. Can you use a water-resistant G-Shock watch underwater?

A. Not technically. The watch will continue to tell time and any other measurements on its face, but you risk damaging it if you attempt to operate its button or crown while it’s wet or submerged. The exception here is the Diver’s Watch 200m. Its casing protects and allows for full underwater operation.

Q. What do all of the numbers and letters in the model name mean?

A. They’re all part of a not-so-secret code. The prefix code details features like digital or water resistance, and the following figures list everything from the model’s color to its origin.

A reliable analog-digital model with many features. 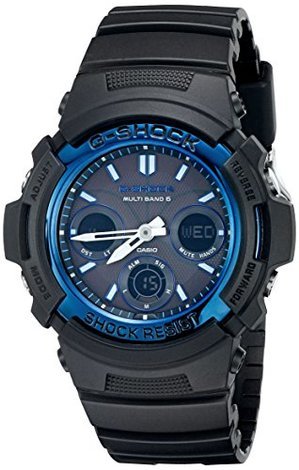 One of the smaller G-Shock watches, featuring atomic timekeeping. 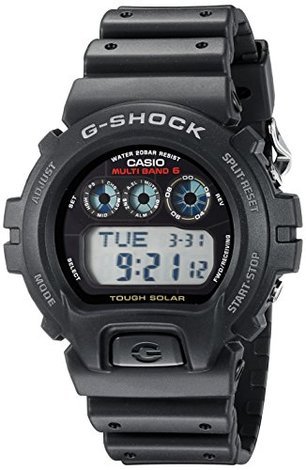 A solar-powered digital watch with atomic timekeeping for exceptional accuracy. 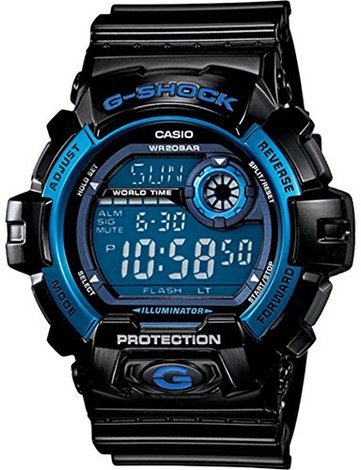 Sporty design with an LED that activates with a flick of the wrist.