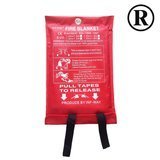 One of the most versatile fire blankets that comes in various sizes for different uses.

Available in 4 sizes. Fiberglass construction is durable and heat resistant up to around 1,000°F. Safe and nontoxic.

Blanket may rip when removing it from the pouch.

The best budget fire blanket to keep around when you need a little bit of protection while on the go.

Folds up into a small pouch that can fit into tight spaces like pockets, cars, and closets. Capable of handling various types of fires, including oil and grease fires. Resists fires from spreading.

Can cause an allergic reaction. 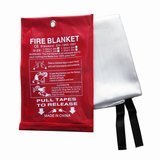 A basic fire blanket that is large enough to provide basic heat protection for a single person.

Comes with the ability to withstand temperatures up to 1,076°F. Good for smothering flames with the blanket. Cleaner than fire extinguisher. 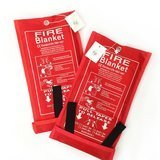 A great combination pack of 2 individual blankets for multiple locations around the home.

Each fire blanket comes in an individual pouch that is easy to remove when necessary. Each one can be used multiple times. Instructions are clear. Convenient 2-pack is great for homes.

Not large enough for a full-size adult.

The best personal fire blanket to choose when you want a quick way to deal with flames.

Small blanket is ideal for emergencies inside. Suffocates fires when a fire extinguisher is not handy.

Fiberglass construction can cause itching when wearing the blanket.

There are some products you buy and hope to never use. A fire blanket is one of them. A fire blanket is a quick, relatively mess-free way to extinguish a fire, and it’s simpler to use than a fire extinguisher. When a fire breaks out, you simply cover it with the heavy blanket to cut off the fire’s supply of oxygen and smother the flames.

Studies show that more than 30% of house fires are started by cooking equipment, and experts say a fire blanket is the easiest way to put out a kitchen fire. Spraying water on a kitchen fire is a very bad idea. It can splash flaming oil around, spreading the fire and putting you at risk of burns. Fire extinguishers are helpful, but they make a huge mess. While a mess is better than a fire, a fire blanket can help you avoid the mess.

You can even use a fire blanket to help you escape from a fire, since most can resist heat to around 1,000°F. Holding the blanket over your body or wrapping it around a child as you flee can protect you from flames and hot debris.

Fire blankets aren’t as common as fire extinguishers, so you might be uncertain about where to start looking. Let BestReviews help you find the right fire blanket for your needs. Keep reading for more specifics, and be sure to check out our recommendations for the best products on the market. 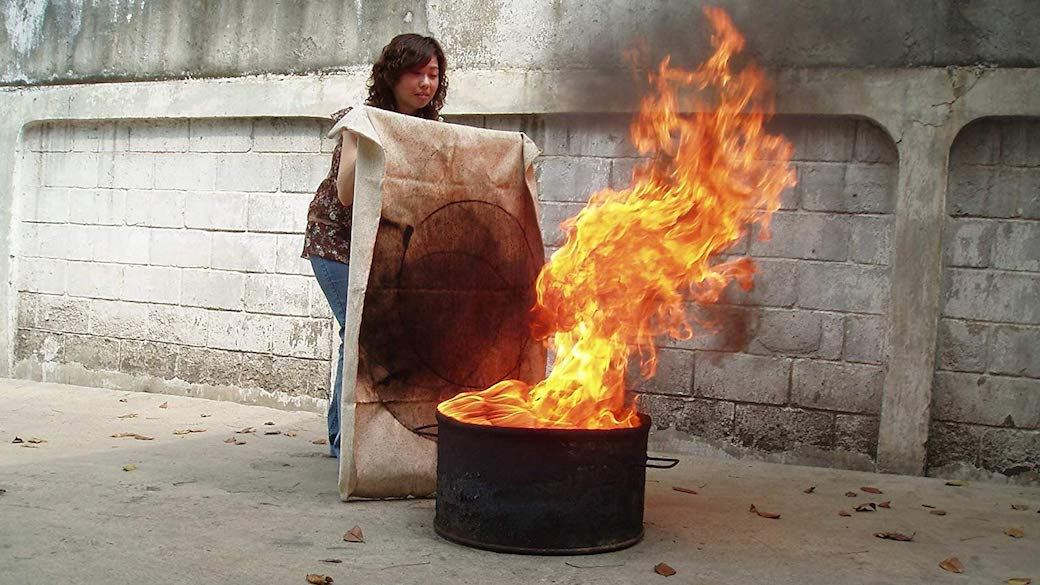 Fire blankets can be used to fight any kind of fire, unlike water, which is hazardous to use with grease or electrical fires.

When shopping for a fire blanket, it’s important to think about where you expect to use it and store it.

Pouch: If you plan to keep a fire blanket under a sink, in a closet, or in an emergency kit, packability is key. Look for a fire blanket that comes in small, brightly colored pouch that is easy to find if and when you need it.

Grommets: If you’re concerned about fire in your kitchen, fireplace, or grilling area, look for a fire blanket you can hang up in the area. Look for fire blankets that come in packages with grommets at the top that allow for easy hanging. Mount the blanket close enough to the heat source that it’s easily accessible but not so close that flames could block your access to it.

Signage: Grommets will do the trick for home use, but commercial operations should consider extra signage or very conspicuous storage to alert employees to the presence of the fire blanket in case of emergency.

Fire blankets are made primarily of fiberglass, so they can irritate skin. Always handle one by the tabs if possible.

Fire blankets don’t have many features: they are basically blankets made of fiberglass and occasionally Kevlar. It’s the size that makes a fire blanket suitable for a particular situation. It’s tempting to buy the largest blanket possible so you’re ready for anything, but that isn’t necessarily the best idea. You don’t want to struggle to lift an oversize blanket in an emergency. And a very heavy blanket could hamper your escape from a burning building.

Consider the following fire blanket size recommendations as you shop:

Fire blankets measuring 1.8 square meters (about 34.8 square feet) and weighing more than three pounds are intended for places like commercial kitchens or workshops. Fire blankets don’t typically come in sizes larger than this. A larger, heavier blanket is more challenging to control, and a poorly placed blanket can be ineffective at cutting off a fire’s oxygen supply.

A fire blanket is a natural choice for putting out a clothing fire. Rather than wrestling with a fire extinguisher, wrap yourself in the blanket and roll on the floor to choke the flames.

The price of fire blankets is mostly based on size. Prices may vary slightly depending on special treatments or additional heat barriers built into the blanket, but they’re relatively consistent compared to other products.

Fire blankets measuring around 1.2 square meters (about 15.45 square feet) typically cost between $15 and $20.

A fire blanket is great to have on a boat, which is less accessible to first responders.

Here are a couple other products that were contenders for our shortlist. The small New Boss Fire Blanket is a good value for its size. At one square meter and one pound, it’s best used for small kitchen fires. The packaging includes a grommet, so it’s ready to hang just where you need it. If you’re in the market for something large and portable, check out the extra-large, heavy-duty Sellstrom Fire Blanket and duffle bag from a trusted manufacturer. Measuring 30 square feet and weighing four pounds, this blanket is reinforced with brass grommets and Kevlar. 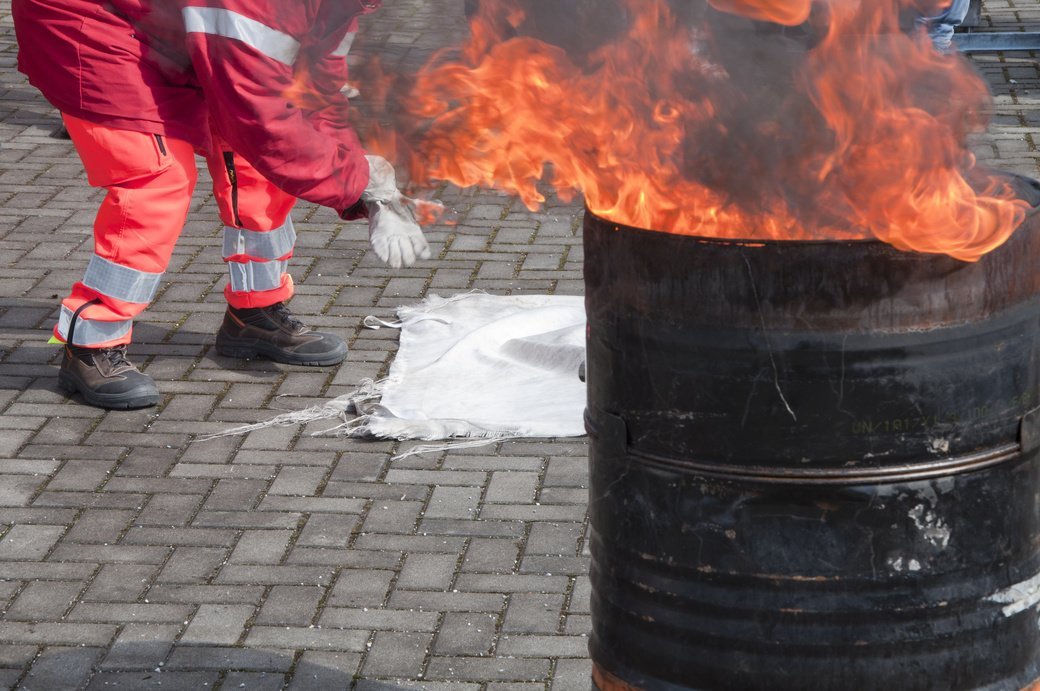 A fire blanket is most effective when the fire is still small.

Q. How do I place a fire blanket on a fire?

A. The process is simple, but you must stay calm, which is easier said than done. To best extinguish the fire, remove the blanket from the package by its tabs, and hold the tabs as you gently lay the blanket over the fire. Start on the side closest to you and spread it across the fire, front to back. It’s tempting to throw the blanket over the far side of the fire, but it’s not a good idea. The blanket might not land flat, which compromises its ability to smother the fire and puts the blanket at risk of burning.

Q. Can I keep a fire blanket in my kitchen instead of a fire extinguisher?

A. No. The two have different uses. A fire blanket is your first line of defense. If you successfully smother the fire while it’s small, you won’t need to use a fire extinguisher. But if you’re not successful or if the fire is too big, you’ll still need the fire extinguisher. If you only have a fire blanket, you’d be defenseless if it doesn’t fully smother the fire since using water on a kitchen fire is not recommended. It’s a good idea to have both available.

Q. Are there any kinds of fires where I can’t use a fire blanket?

A. No, as long as the temperature of the fire isn’t higher than the blanket’s temperature rating. Fire blankets deprive a fire of oxygen rather than add substances to the fire, so there’s no risk of unexpected chemical reactions. A fire blanket is safe for grease fires, since it won’t splash burning oil. And it doesn’t create pools of moisture that can conduct electricity – the main reason you shouldn’t use water on an electrical fire. Fire blankets are particularly effective at smothering fires when the fires are small and have a relatively low temperature. Most blankets have a temperature limit of around 1,000°F, although it might vary by manufacturer.

Q. Can I reuse a fire blanket?

A. Probably not. Most fire blankets are not reusable. Even a blanket used to smother a small fire will be weaker in the spot where it was exposed to flames, putting you at risk for the fire to spread. Dispose of a used fire blanket as soon as it’s cool. Consider soaking it in water first – you don’t want a hot fire blanket to start another fire!

Other Products We Considered
The BestReviews editorial team researches hundreds of products based on consumer reviews, brand quality, and value. We then choose a shorter list for in-depth research and testing before finalizing our top picks. These are the products we considered that ultimately didn't make our top 5.
Sellstrom
Fiberglass Emergency Fire Blanket
Idubai
Fire Blanket
Deke
Emergency Fiberglass Fire Blanket
DIBBATU
Fire Blanket
Abn
Heavy-Duty Fiberglass Fire-Retardant Blanket
The team that worked on this review
× 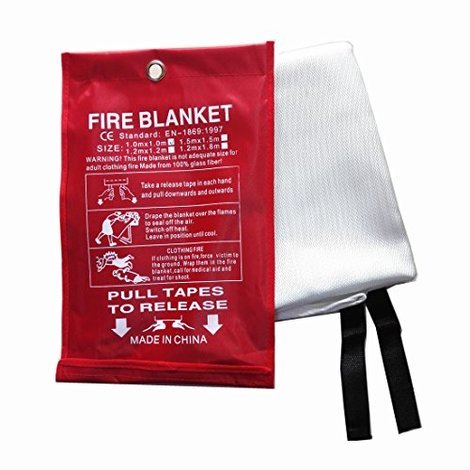 A basic fire blanket that is large enough to provide basic heat protection for a single person.

The best budget fire blanket to keep around when you need a little bit of protection while on the go. 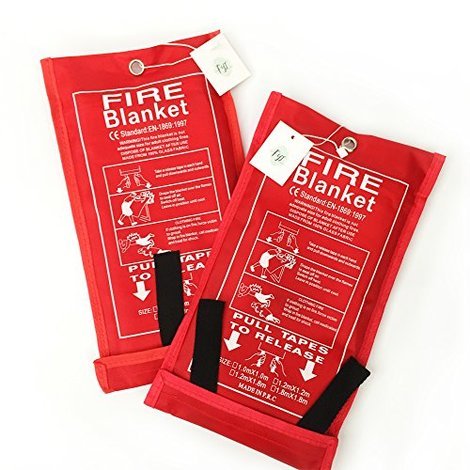 A great combination pack of 2 individual blankets for multiple locations around the home. 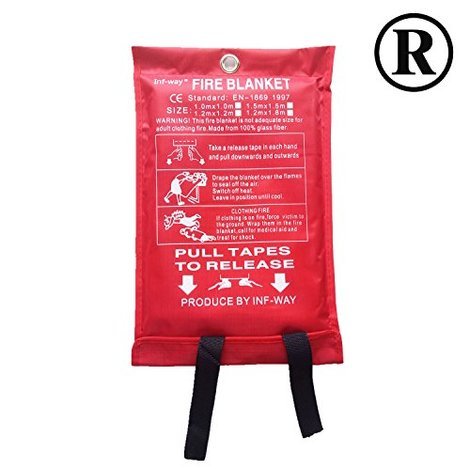 One of the most versatile fire blankets that comes in various sizes for different uses. 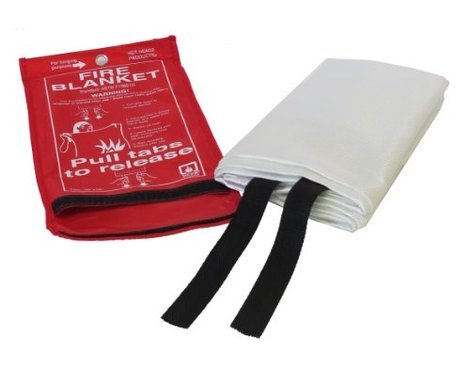 The best personal fire blanket to choose when you want a quick way to deal with flames.