This eero WiFi system setup is designed for most homes and worth considering for small to mid-sized homes.

Single eero device provides plenty of connectivity and reliability at range. Beacons help boost the range without the need for plugging in dedicated extenders.

The original eero is the best bet for anyone who needs to cover a fairly large space with a reliable and fast Wi-Fi connection on a budget.

Its top speeds of 350 Mbs are great, but it is still the least impressive eero has to offer.

Between its lighting-fast maximum speeds and extra-wide coverage, the eero Pro 6 Wi-Fi system is the best option for large homes.

The eero Pro 6 is a fairly pricy Wi-Fi system.

The original eero is solid, but if you need to cover a big area and you are already paying for especially fast internet, the eero 6 is worth the investment.

The eero Beacon is the easiest way to expand an eero Wi-Fi system and the best solution for adding onto smaller eero setups.

For your home or business, a mesh network can create a stronger overall WiFi network than you might otherwise have. The mesh technology boosts signal strength among each of the pieces of hardware in the network, eliminating the dead spots that often plague WiFi networks. Mesh can reduce the problem of dropped connections, too.

One of the originators of mesh networks is eero. This company has been making mesh network hardware and software for several years, and it has multiple models available to match your WiFi needs, including hardware that uses the recently released WiFi 6 standard. In this guide, we discuss the key features you need to understand when shopping for the best eero WiFi system. 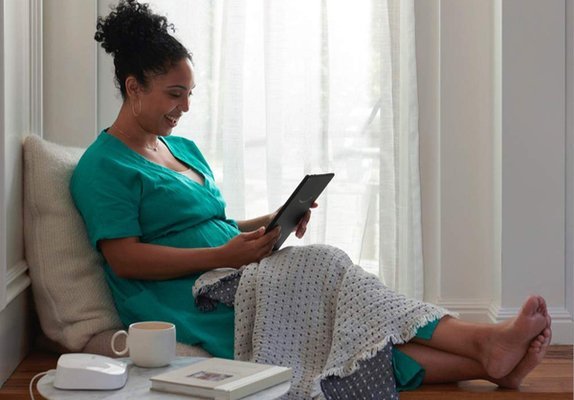 The company eero began operations in 2014 and was one of the first companies to offer mesh WiFi systems for consumer use in 2016.

Let’s discuss how mesh networks work and how eero systems work. You then can determine whether one of these systems would suit your needs.

Before mesh networks, there were traditional routers. If you have a home where the bedrooms and media rooms are spread far apart, the signal from a traditional router may not reach every room with useful signal strength.

In this case, you could add extenders to your traditional WiFi router network. A WiFi extender captures the signal from the router and boosts it to create a greater coverage area. However, extenders can be tricky to set up and use, and they don’t carry as much power as the original router. Because an extender can be a weak link in a network, in many circumstances, mesh is preferable.

A mesh network uses more than one piece of hardware to push the wireless signal throughout the home, much like a traditional router and extender. Each piece of the mesh network has the same level of power and connectivity, which simplifies setup and guarantees a smoother signal strength everywhere.

An eero network uses patented TrueMesh technology to deliver the benefits of mesh. You place the eero devices in different locations in your home, allowing the signals from each device to overlap slightly, guaranteeing full coverage.

As part of TrueMesh, eero uses software to manage the network, meaning it happens automatically. The software measures the data usage on the network and the types of devices that make connections. It also places devices on the 2.4 GHz or 5 GHz band automatically, depending on the needs of the device.

After running the data through algorithms, TrueMesh adjusts its performance to deliver higher data speeds to the areas of the home that see the most traffic.

Should TrueMesh measure a problem in a certain portion of the network, it adjusts the performance of the hardware devices to ensure an uninterrupted signal. 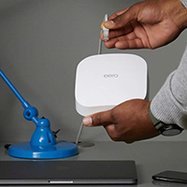 Did You Know?
Mesh WiFi systems provide a replacement for the traditional setup of router and WiFi extender in the home.
Staff
BestReviews

Let’s take a look at the eero kits available and some of the features they offer.

eero Pro 6: With three devices in this product, the Pro 6 provides up to 6,000 square feet of coverage. It supports the WiFi 6 standard, delivering performance to match ISPs that offer speeds up to 1 Gbps (or 1,000 Mbps). It has tri-band technology, meaning it carries one antenna for the 2.4 GHz band and two antennas for the 5 GHz band.

eero 6: The eero 6 with three devices is able to cover up to 5,000 square feet. It supports WiFi 6 standards using dual-band technology (one 2.4 GHz and one 5 GHz band). It works well with ISP speeds of up to 500 Mbps.

eero: With the eero, you receive dual-band technology. This three-pack of devices supports WiFi 5 standards and covers up to 5,000 square feet. It works best with ISPs that support up to 350 Mbps of data transmission speeds.

You may find some older eero products for sale, but these will have significantly slower performance than its current models.

You have the option of adding single devices to your existing eero network to provide a bit more coverage. These extender single devices have the same features as the original eero devices in the kits.

One alluring benefit of a mesh WiFi system is ease of setup. 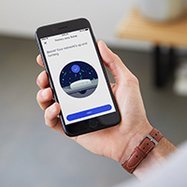 Did You Know?
You can control your eero WiFi system through a mobile app, which further simplifies the process of installation and system monitoring.
Staff
BestReviews

Here are some troubleshooting techniques to help you set up and run your eero network. 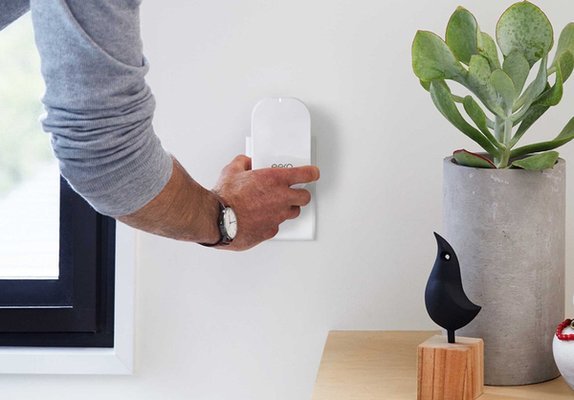 With a mesh network, everything happens automatically. The system determines the best WiFi band to use for each device and makes the connection on its own.

Q. Are there physical differences between a traditional router and a mesh system?

A. A WiFi router often has large antennas that extend away from the hardware; these antennas are used to create a directional signal. However, eero hardware doesn’t need antennas because mesh networks have the signal strength and quality to negate the need for directional signals. The eero hardware resembles a simple box, roughly the size of a deck of playing cards, which is a bit smaller than a traditional router.

Q. Do I need WiFi 6 in my eero mesh network?

A. The benefits of WiFi 6 technology include significantly faster transmission speeds as compared to older versions of WiFi. Further, it gives you the ability to support dozens of simultaneous device connections without a drop-off in performance. Mobile devices also require less battery power to use the WiFi 6 network than they do older WiFi technologies.

Q. Does the eero WiFi system have security features?

A. Yes. The hardware automatically receives regular upgrades and security patches. You don’t have to install the patches yourself. Additionally, the eero app provides statistics and warnings about threats to the network. 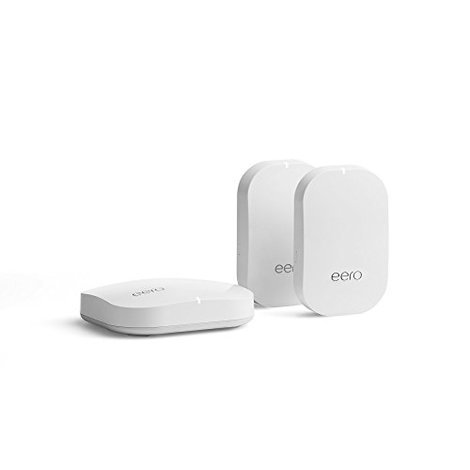 This eero WiFi system setup is designed for most homes and worth considering for small to mid-sized homes. 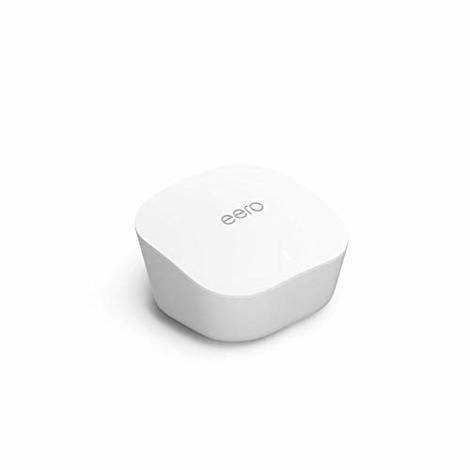 The original eero is the best bet for anyone who needs to cover a fairly large space with a reliable and fast Wi-Fi connection on a budget. 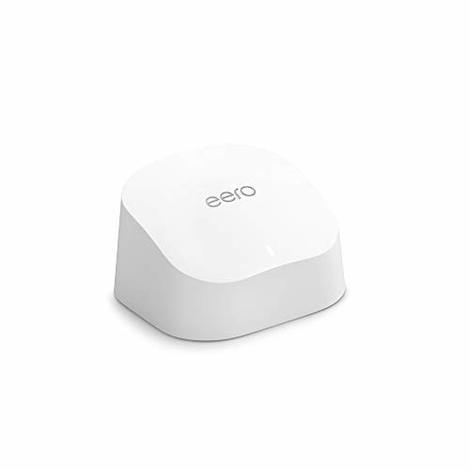 The original eero is solid, but if you need to cover a big area and you are already paying for especially fast internet, the eero 6 is worth the investment. 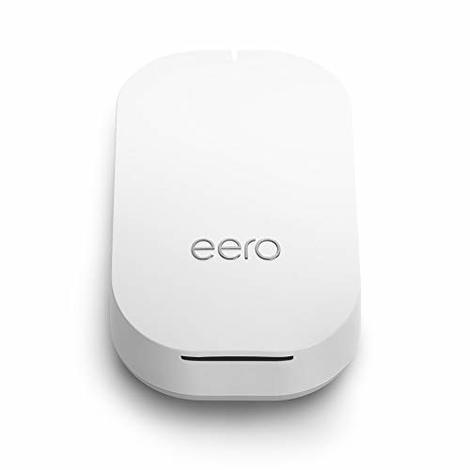 The eero Beacon is the easiest way to expand an eero Wi-Fi system and the best solution for adding onto smaller eero setups.